Brother has a fine range of mono laser printers, starting with personal machines and moving up though small business to larger workgroups and departmental devices. The HL-5380DN is a mid-range printer, faster than entry-level machines and with a bit more expansion potential, but then, it also has a higher price.

In many ways the look of this printer is similar to Brother’s other models, but it has one noticeable difference. It’s small, well-designed control panel, set to the left of the paper output slot is wider than the surround and forms a small balcony, to accommodate a 16-character, single-line LCD display. It has three coloured LEDs as backlights, so it can show green, orange or red, depending on the status of the message on its display. 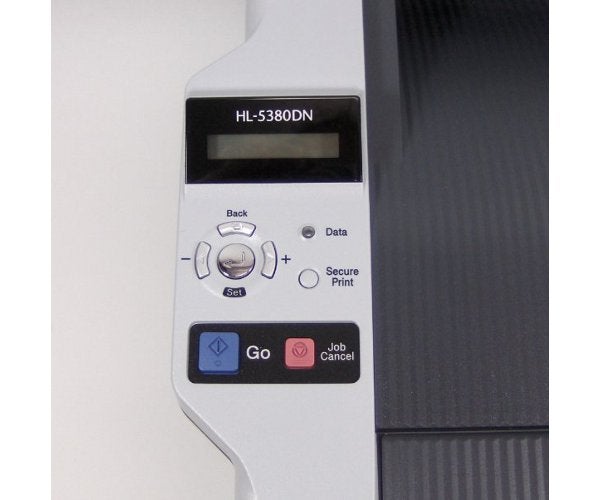 One of the features of the controls is the ability to enter a PIN to provide secure print, which only starts when you’re by the machine. This kind of facility is normally only available in more expensive, workgroup devices, but can still be useful in any environment where confidentiality is important.

The main paper tray at the bottom of the machine takes 250-sheets, though an optional second tray can double the capacity. In addition, there’s a fold down and pull-out, 15-sheet multipurpose tray for special papers and envelopes. 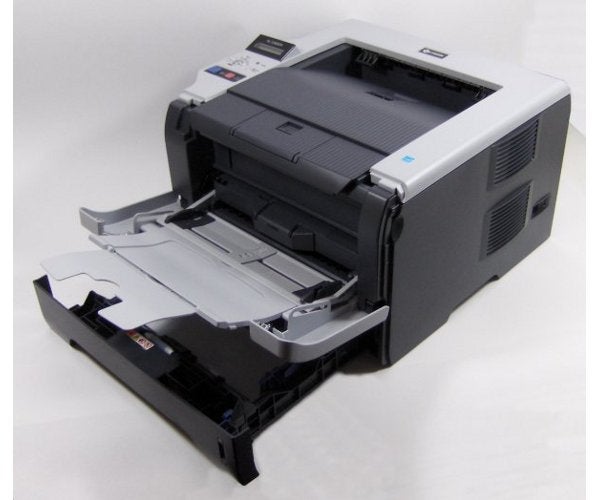 There’s a duplexer built in, which takes pages half fed out to the output tray and rolls them back in again to print the second side. This can save up to half your paper use and with paper at around £4 per ream, the savings can build up rapidly.

At the back are sockets for USB and 10/100 Ethernet, though there’s no wireless facility. Brother’s software comprises network administration and a driver.

Folding down the front section of the printer from behind the multipurpose tray reveals the two-part drum and toner cartridge, which pulls forward from inside. The drum is rated at 25,000 pages, so in typical use you could expect to use eight standard toner cartridges or two and a half high yield ones, before having to change it.

Brother rates the HL-5380DN at speeds of up to 30ppm, though we saw exactly half this when printing our five-page text document. The real-world speed was identical in toner save mode, not a conventional draft mode, but we did see it rise to 22.6ppm on the longer, 20-page document.

Switching to duplex print produced our 20-side test on 10 sheets in 1:43, which is equivalent to 11.7 sides per minute. The five-page text and graphics document gave 15ppm again and a 15 x 10cm photo printed in a snappy 15s. All these speeds are very respectable and this isn’t a machine which is going to keep a small office or workgroup hanging around for print jobs. 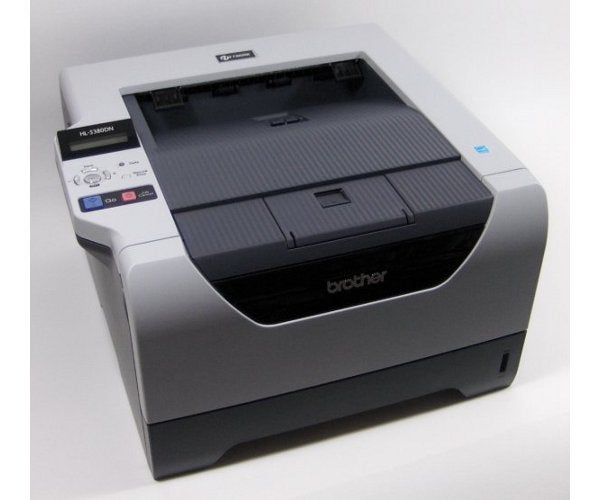 It’s not a particularly quiet printer, with peaks of 65dBA at half a metre, but noise levels are directly related to speed and size. The HL-5380DN has a comparatively small case, so noise is going to be more noticeable.

Print is a little light in both normal and toner save modes. Although no thin serifs or descenders are lost in the print, it does look as if the printer is running low on toner, even on a new cartridge.

Greyscales are also light, though this does mean overprinted text shows up well. Reversed text demonstrates the printer is more than capable of printing dense black. Our test photo showed a smoother sky than most but, for all its lightness, still lost some detail in the darker shadows. 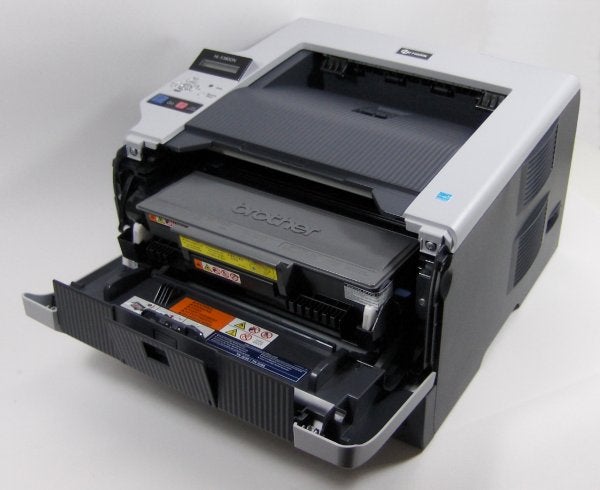 Consumable prices are very reasonable, giving a cost per page of 2.4p, about average for this class of printer. The relatively high yields of both toner and drum mean you won’t be attending to this machine’s needs that often.

Verdict
If you want a mono laser printer which can print a bit quicker than the standard one-per-desk models, the Brother HL-5380DN will do it for you. It doesn’t cost that much to run, either, though you may find both text and graphics come through a little light, in comparison with some of its rivals. Fast duplex and a handy secure print facility may also be bonuses you’re looking for.