Brother has a good range of mono laser printers for the high-end individual and small workgroup markets. We’ve already looked at the HL-5340D and the HL-5370DW, reviewed here, has a lot of the same characteristics, but adds Ethernet and Wireless connectivity.


This is a neat, squat machine in light and dark grey, with a piano-black band across the front. There’s a 250-sheet paper tray at the bottom of the front panel and the front panel itself folds down to reveal a multipurpose tray, which slides and flips out to support a further 50 sheets of special media. The mechanism feels a bit flimsy, but worked well enough during testing. 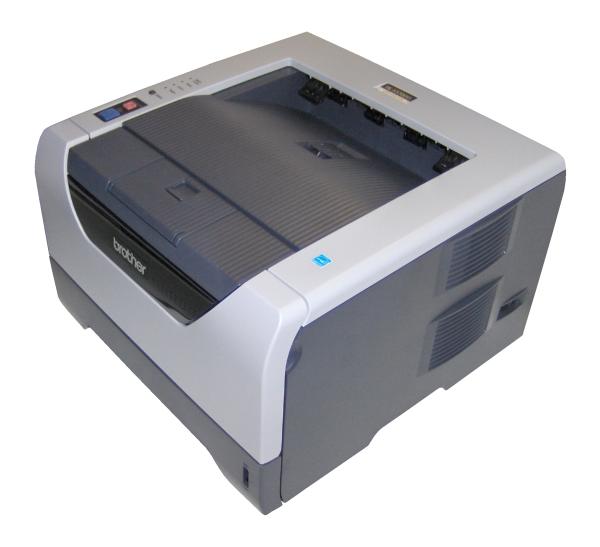 Print jobs feed to a deep indentation on the top surface of the machine and to the left of this is a column of five indicator LEDs and two buttons, marked Go and Job Cancel. This is all you get as a control panel as there’s no LCD display. At the back are sockets for Ethernet and parallel ports, as well as the ubiquitous USB. Networking is available as a cabled connection or wirelessly, via 802.11g Wi-Fi.


With an all-in-one printer, wireless installation is comparatively straightforward, as even the simplest machines usually have LCD displays, which can be used for simple feedback and instructions. However, this laser printer, like so many others, has just status LEDs, making set-up more complicated.


To be fair, Brother has tried to cover all the options, though all but the automatic ones are a bit convoluted. If your router supports Secure Easy Setup, Wi-Fi Protected Setup or AOSS, you can use these systems to get the necessary settings across to the printer. In other cases, things aren’t as easy.


You can install using a network lead, though this needs to be connected directly to your router, or you can work from a wireless PC, as long as you don’t mind changing all its wireless settings to communicate with the printer. You need to note down the original ones, so you can reset them at the end of the installation.


The printer is well catered for in terms of page description language and operating system support. It includes both PCL 6 and Postscript Level 3 in emulation and there are drivers for Windows from 2000 onwards and Mac OSX 10.3.9 and greater. There are CUPS and LPD/LPRng drivers for Linux available, too.

The drum and toner cartridge is a two-part consumable, with the toner cartridge piggybacking on the drum. The combined cartridge slides in from the front of the printer and is the work of seconds, making it very easy to maintain.


Brother rates the HL-5370DW at 30ppm, but running our five-page black text document produced a speed of only half this, at 15.8ppm. Increasing the page count to 20 pages also increased the speed, though, to 25.5ppm, which is not far off the headline rate. A five-page, text and graphics job produced a speed of just 11.5ppm, even slower than a 20-side duplex job – duplex as standard on this machine – which gave 12.2spm.


All of which really implies that this printer gets somewhere near the manufacturer’s claims under ideal conditions, printing black text pages on one side of the paper only. In comparative terms, it’s still quite a quick printer and with a small number of people using it, won’t be holding up their productivity. 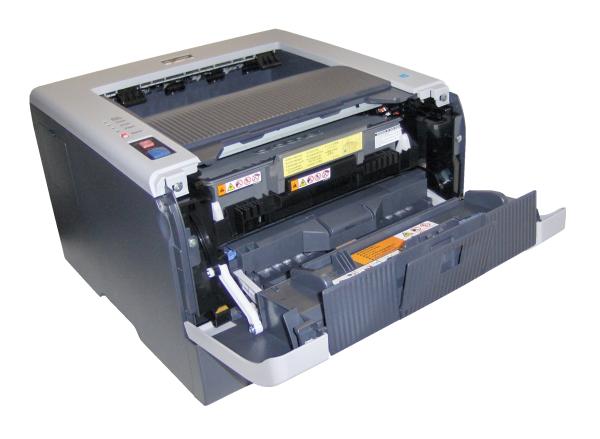 Quality of output from Brother laser printers is generally very good and is one reason for the company’s strong market position. Black text from this machine is especially crisp and clear, giving a very professional look to documents, almost as if they are letterpress printed.


Greyscale tones are also good, with sufficient difference between shades to suggest the different colours in a colour graphic. There’s a little bit of variation in some of the dark greys, but generally graphic output is good.


There are three different resolutions for printing photo images: 600dpi, 1,200dpi effective and a true 1,200dpi mode. The first of these is almost twice as fast as the last and, while there is noticeable difference between them, for many purposes one of the first two, quicker, print modes will be adequate.


If you compare the page cost calculated here, 2.49p per page including 0.7p for paper, with that from the HL-5340D, you’ll notice this machine costs around 0.7p more. This is because we couldn’t find the Brother consumables at the same prices as when we ran the earlier review and both machines are now likely to cost this much to run. This is still not that expensive, compared with other mono lasers in the same price bracket, though the overall value has dropped a little.


Once set up, the HL-5370DW worked flawlessly under test, giving good speed and well above-average print quality. Recent apparent increases in consumables pricing brings this machine out with higher running costs than when we tested it sibling, but remember both printers use the same drum and toner, so these latest cost rises apply to both machines.