The HL-4150CDN and its sibling printers represent Brother’s first move into the workgroup colour laser printer market, where they’re up against major names, such as HP, the market leader. A newcomer has to offer some obvious advantages to cut a niche in this crowded sector.


Brother is obviously going for the solid, reliable look with the HL-4150CDN. The cream and black case is pretty close to cuboid, apart from a slight backwards lean to the front panel. It’s a substantial presence on a desk. 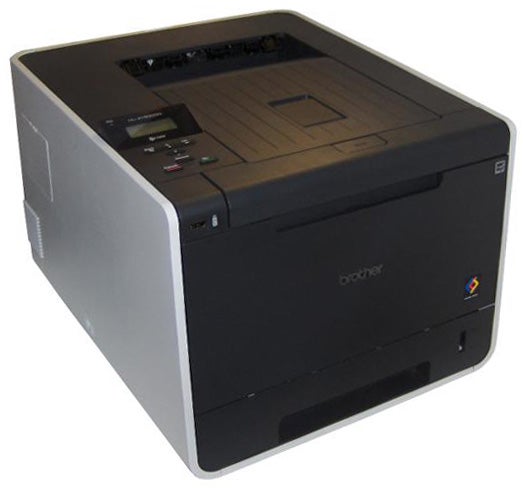 The control panel sits to the left of the paper output slot on the printer’s top surface and includes a 2-line by 16-character backlit LCD display, which flips up to any of five positions. Controls are well laid out and include a Secure button, which can be used to retain sensitive documents for print only when you’re at the machine.


There’s a USB socket set into the top of the left-hand side of the front panel and this works with USB drives for direct print of documents, including JPEG, TIFF and PDF. 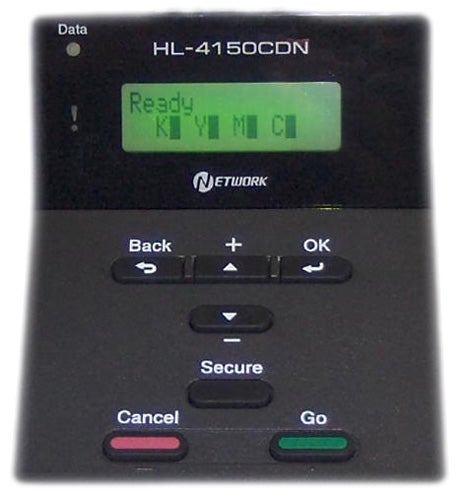 There’s a 250-sheet paper tray fitted as standard, with a 500-sheet tray available as an option. We still feel 250 sheets is too small for a printer aimed at workgroup sales, particularly since the duty cycles on this type of machine often run into several thousand pages per month. There’s a 50-sheet multi-purpose tray, which folds down from the front and compensates for the small capacity of the main tray.


At the back are sockets for USB and 10/100 Ethernet – there’s no wireless facility on the HL-4150CDN, though it’s available on other machines in the range. The printer comes with PCL and PostScript drivers in emulation, as well as a status monitor applet. As is pretty much the norm, Windows and OS X are supported out of the box, with Linux drivers downloadable, in this case from the Brother Solutions site.


Pull open the front panel and you can slide out a tray holding the four toner cartridges. This is a new, inline, colour laser engine, designed from the ground up, so is easy to maintain, though the printer still uses a separate drum and transfer belt. These components have service lives of 25,000 and 50,000 pages, though, so they won’t be an everyday concern.

The new engine also fills a gap in Brother’s speed range and is rated at 24ppm for both black and colour print. Under test, our five page black text document completed in 20 seconds, equivalent to a speed of 15ppm, but on the longer, 20-page test this climbed to 19ppm. OK, it’s still not 24ppm, but it’s a respectable speed for this class of printer.


The HL-4150CDN has a built-in duplexer and this has a newly-designed paper path, which takes pages in pairs, giving a better overall speed than some competitors, as long as your document is a multiple of four sides. It’ll duplex any even number of pages, of course, but you only see the full benefit of the faster duplex in four-page multiple prints. 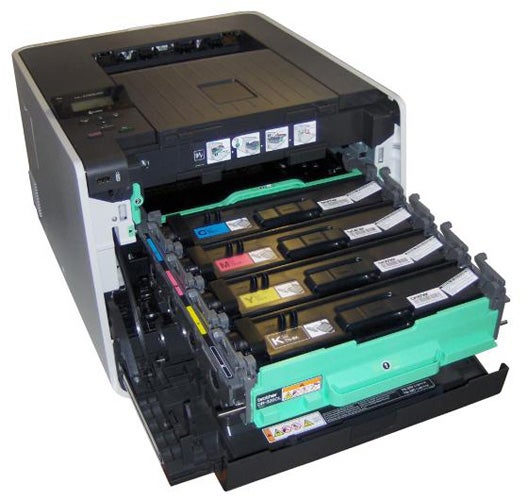 We saw a speed of 12.5 sides per minute, which is a little more than half the simplex speed, though still quite a bit faster than, for example, the Samsung CLP-670ND, which only clocked up 9.5spm on the same test.


The print quality is well up with the best colour lasers we’ve tested. Black text print is sharp and clean and isn’t too heavy on the page. Draft mode, which saves toner, is also very readable. It’s not as well-formed or as dense, but is fine for internal documents. 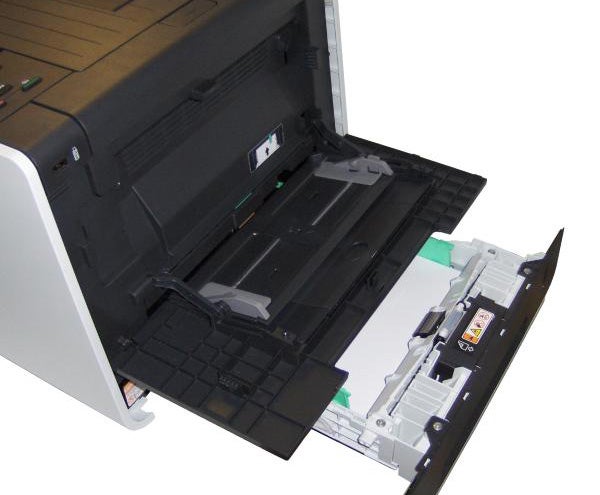 Colour print, particularly for business charts and graphs, is dense and bright, though colours are a little dark in comparison with originals. There’s some slight haloing with black text over darker colours, but it’s not that marked. Photo prints also come through a bit dark by default and lose some detail, but at least colours aren’t garish, as they sometimes are from colour lasers.


The typical running costs of the machine are likely to be lower than these quoted here, as we only have Brother’s quoted SRPs to work from. The machine is too new for discounted prices to be quoted on the Web. Using SRPs gives a page cost of 3.4p for black and 15.7p for colour. These prices are quite high, compared with similarly priced alternatives, but not if you compare with those competitors’ list prices, when they come out better than many.


Brother’s move into the mid-range colour laser market looks well set, if this printer is anything to go by. It’s well up to the main competition on speed and print quality and, once we see its consumables at discount prices, is likely to show similar running costs, too. It may not have some of the bells and whistles of its competitors, but the relatively keen pricing compensates for this. The most useful extras such as secure print and direct USB print work well, giving a sound combination, overall.