A mono laser printer needn’t be a hugely complex piece of equipment any more. The basics of the technology have been known for decades and its evolution has made it simpler and more compact. Brother’s HL-2035 is an entry-level, desktop, mono laser, designed for use in a home office or possibly as a one-per-desk device in larger offices.

Although the HL-2035 sits very squat on the desk, its footprint is little smaller than its higher priced stable mates. The minimum size of a desktop printer is governed by the paper it has to handle but, having said that, there?s a large flap set into the top cover of this one, which flips forward to stop pages sliding off the nicely curved front edge. There?s a deep inset in the machine’s top surface, which acts as a paper-out tray and there’s little that’s unconventional about the machine’s overall design. 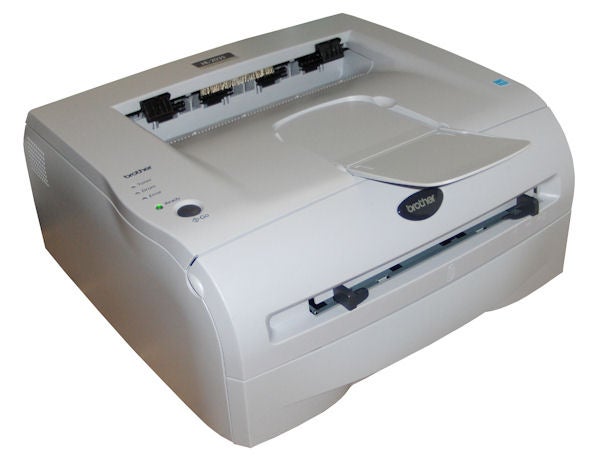 At the bottom of the front panel is a surprisingly capacious 250-sheet paper tray and there’s a single-sheet multi-purpose feed positioned directly above this. The printer can take media up to 161gsm, so you’ll be alright feeding envelopes and thin card through this slot.

There are four indicator lights and a single button on the left-hand side of the printer’s output tray, indicating low toner, an exhausted drum, any paper jams and its ready status. The LEDs also cycle at switch on, while the machine is preparing to print.

Set up is as simple as opening the front cover and inserting the two-part drum and toner cartridge. This slides in easily and positively and the toner cartridge clips onto the drum section without difficulty.

There’s little software provided, other than the drivers. There are versions for Windows, OSX and Linux, so Brother is trying to cover all the main bases. 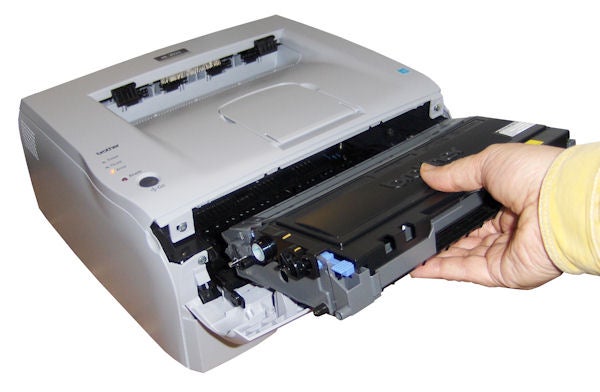 If you regularly read printer reviews at TrustedReviews, you’ll know what we think about quoted print speeds. All the main printer makers exaggerate the speeds of their machines, because all of their competitors do it. Brother is no worse than most, but we didn’t expect to see the HL-2035 get close to its rated 18ppm. We were wrong.

Our five-page text document took 23 seconds to print, though there’s a 13 second warm-up to add onto that, if the machine is sleeping, which it will be most of the time when you come to print. Most printers in the home are lucky if they get to print once a day.

The test result gives a print speed of 13ppm, which is over 70 percent of the rated speed. Although most office print jobs are around four pages long, we also run a 20-page job, to try and be fair to all printer makers and in the HL-2035’s case, this took 1:15, giving a print speed of 16ppm. This is a pretty good result for an entry-level laser printer, particular one which costs under £60, and commendably close to the speed printed on its spec sheet.

So the machine prints quite fast, but what are the prints like? Put simply, they’re very good. Black text is densely black, smooth with no patchiness and characters are crisp and well-defined. There are no visible jaggies on curves or diagonals. Greyscales in business graphics are also smooth, with no signs of banding and there’s good matching of colours to greys, maintaining a differential so you can still see the variation in shades.


The machine’s top resolution of 2,400 by 600 comes into its own with photo prints, always quite a test for a toner-based printer. Here, though, tones are smooth and the print is free of any obvious bands. While some of the dark, shadowed content is lost, foreground detail is good. 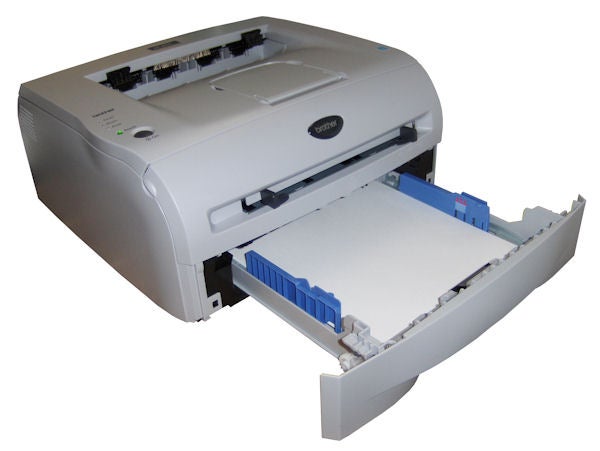 Although a HL-2035 toner cartridge normally prints 1,500 pages, the ‘starter’ cartridge supplied here is only good for 1,000. This little trick, again common to most manufacturers, means you start paying for consumable earlier and, given the minimal cost of black toner, seems a bit mean spirited.


However, Brother has split the toner and drum components of its cartridges, so you only have to replace the drum every 15,000 pages, which is good environmentally, as well as keeping the overall printing cost down. We calculate this cost at 3.08p per page, which is not bad, given the price of the printer itself. While more expensive laser printers drop the cost per page right down, more of their overall cost is built into the asking price.


This is a neat, functional, little mono laser printer. There’s really nothing to hold against it, as it’s inexpensive to buy, quick to print, produces good quality output and doesn’t cost a packet to run. As a colleague who came by while testing this machine said ‘That’s sweet. I like Brothers, they just sit there quietly doing their job’. When it comes to this machine, at least, we have to agree.