This is the entry-level machine in Brother’s range of business LED all-in-ones. It’s aimed at the small office and includes duplex print as standard. It can be set up as a USB, network or wireless device.

Although it’s quite a substantial printer, most of the bulk is in its depth. Its front looks comparatively small, helped by the white and dark grey panelling. At the top is a neat, 35-sheet Automatic Document Feeder (ADF), where the cover flips over to become the feed tray.

Below this is an angled front panel, deceptively simple and with only a single physical button to power it up. However, there is in fact a 93mm full-colour touch panel for all the major controls, alongside a number of touch buttons that illuminate when their functions are available. The touch panel is generally quite sensitive, although we did have some trouble getting it to register finger-taps around its edge. 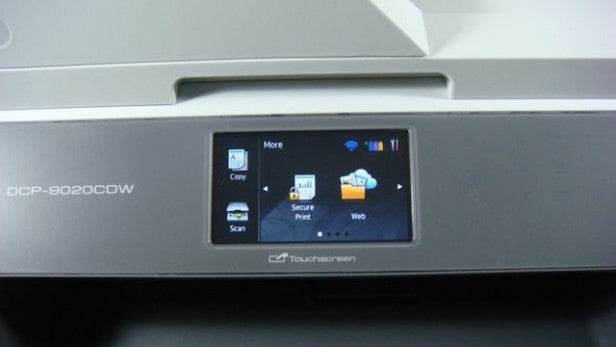 As well as the standard functions of print, scan and copy, the printer can connect directly to the internet. This means that with the correct authentication you can scan directly to many online storage servers, including Dropbox, OneNote and even Facebook.

Below the output slot sits a 250-sheet main paper tray, with a single-sheet multipurpose feed directly above it. There’s no facility for adding extra paper trays.

LED print engines are much simpler than lasers, with a matrix of bright LEDs playing over the photoconductor drum, rather than having a laser beam scanned over it using moving mirrors. Here there are no moving parts, other than the paper feed itself.

Software bundled with the machine includes Brother’s Creative Centre and Web Connect utilities, as well as both PCL and PostScript drivers in emulation.

Although you can connect the printer via both USB and Ethernet, using the wireless connection opens up the internet and direct printing from mobile devices. It’s straightforward with WPS setup.

The four toner cartridges slot directly into the machine, once you’ve folded back the scanner section. There’s also a separate photoconductor drum and transfer belt, but these need replacing only at 15,000 and 50,000 page intervals, respectively.

Brother rates the DCP-9020CDW at 18ppm for both mono and colour print, but our real-world tests only saw about half this speed. In our short, five-page documents, we saw 8.3ppm for mono text and 8.1ppm for text and colour graphics. The 20-page document gave a higher rate of 14.1ppm, but this is still some way short of the Brother’s stated rates. We include processing time in our print-speed measurements.

A single-page colour copy took just 20 seconds and a five-page, mono copy from the ADF took 30 seconds – both very reasonable speeds. A 15 x 10cm photo printed in high-quality mode in 24 seconds and a full A4 photo print from a Samsung Galaxy smartphone completed in 46 seconds. 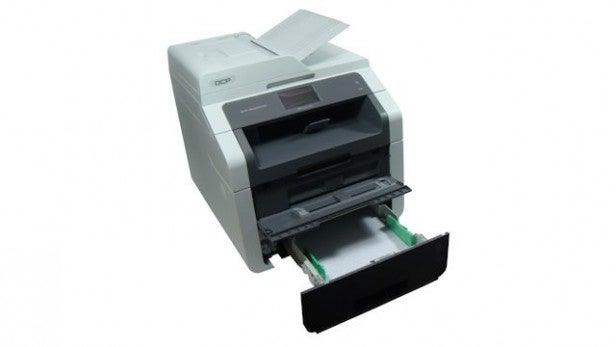 Print quality varies. Black text is excellently reproduced, crisp and as clean as any laser at this price. Colour graphics are fair, although in colour copies we noticed some poor dither patterns in those with yellow fills. Photo prints are better than we’d normally see from a laser, although the 600dpi maximum resolution is noticeable in some images.

Only one capacity of cartridge is available for the Brother DCP-9020CDW, and at the best online prices we could find, page costs amounted to 3.4p for mono print and 15.2p for colour, including 0.7p for paper. The mono cost is marginally lower than other colour laser/LED printers, but we’ve seen the colour cost beaten by a penny or two, elsewhere. 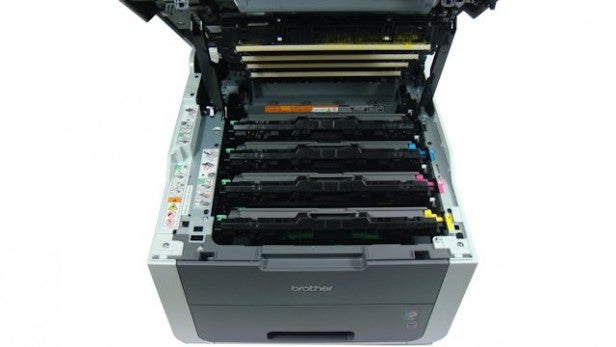 Price-wise, the Brother DCP-9020CDW is competitive for an all-in-one. Rivals such as the £275 Dell E525w and the £270 Samsung Xpress C1860FW lack duplex print, are slower and the Dell has only a mono display.

The DCP-9020CDW is quiet when printing, although hesitant, with plenty of stops and starts
when printing in duplex mode. However, it’s rare to find double-sided print functionality on a machine
in the price range, and wireless direct print is another value-added feature.

It’s worth considering business inkjet printers from Canon, Epson
and HP, which can often beat this class of printer on total cost of
ownership.

Brother’s DCP-9020CD is a good, toner-based page printer, offering features such as duplex print and a colour touchscreen that others in the same price range don’t offer.