For many years OKI was the one company pioneering LED printers, as opposed to laser-based ones, but at the beginning of 2010 brother launched its own range and we reviewed the HL-3070CW in April. Now the company has added all-in-ones to the mix and the DCP-9010CN is a mid-range machine, designed to work in a small office or workgroup for general purpose printing, copying and scanning. 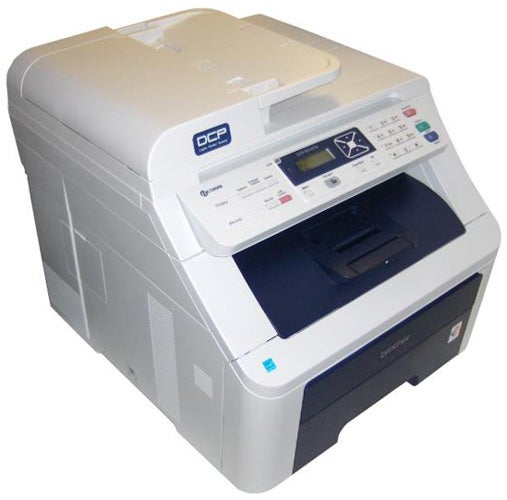 Brother has taken the same printer engine as in the HL-3070CW and its stable-mates and built on a flatbed scanner, complete with 35-sheet Automatic Document Feeder (ADF). Both feed and output trays from the ADF are horizontal, so adding little to the overall height of the machine. Its diagonal front face also provides plenty of room for the control panel and for pages to output from the printer to a position where they can be easily removed.


The control panel itself is well laid out, with a backlit, 2-line by 16-character LCD display and a square of navigation keys to its right, together with a numeric pad – slightly odd, as there are no fax facilities – print and copy option keys and large, coloured buttons to start and stop print jobs. The keypad is included so you can add a security pin code to a job and print it only when you reach the machine. 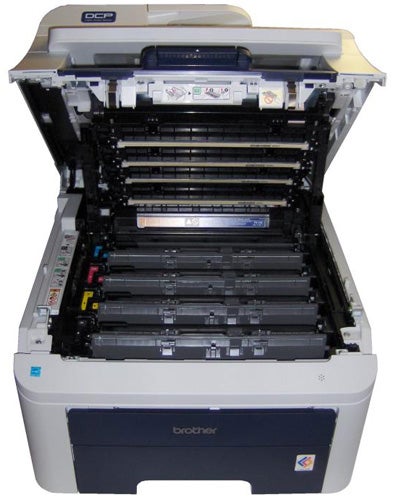 There’s a 250-sheet paper tray with a single-sheet, multi-purpose feed just above. We still feel any printer aimed at servicing a group of people deserves a larger tray, as it doesn’t take long to get through half a ream of paper in a busy office.


At the back are sockets for USB and Ethernet and, as you might expect, networking is standard on this model. Drivers are provided for Windows and OS X and are downloadable for Linux. The machine also comes with a copy of Nuance PaperPort 11SE – combined document management and OCR software – as well as Brother’s own MFL-Suite Pro.


Setting the device up physically involves inserting four combined drum and toner cartridges, one for each colour, diagonally inside the machine, having lifted the top section until it clicks reassuringly in the open position.

Brother claims a black and colour speed of 16ppm for the DPC-9010CN and under test, we saw a maximum black speed of 12.4ppm on our 20-page document, which is not far short of the claim. On shorter, five-page jobs, we saw speeds of 9.7ppm for black and 9.1ppm per colour. These are all very respectable, in comparison with other machines aimed at the same target market.


A single page colour copy completed in 23 seconds and a five-page black copy fed from the ADF took 32 seconds. Finally, a 15 x 10cm photo on an A4 sheet finished in 21 seconds. All these speeds are very much in line with what we’d expect from a small workgroup printer.

It’s unusual for us to see problems in printed output that are obviously not just page to page variations. Our colour test pages from the DCP-9010CN came out very light on magenta and with some noticeable banding in colours like orange and red. Colour copies lost a lot of colour, so only blues and greens were properly represented. We tried reseating all the cartridges and other technical remedies, but in the time available for testing, could not resolve the print problem.


We’re confident this is a problem with the particular review sample we received, however, and not a generic fault with the model. This is mainly because there were no similar problems with the HL-3070CW, which uses the same LED print engine. 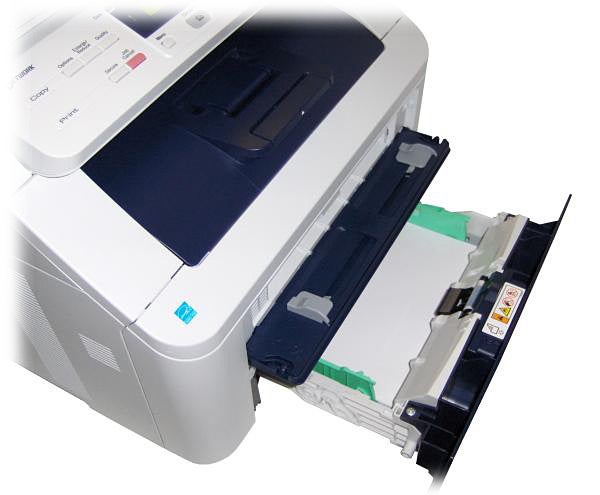 Black text print is very serviceable, though a little light in places. The machine doesn’t have a draft mode as such, instead calling it toner saver. Switching it on made little difference to the print quality and could certainly be used for internal documents, with consequent savings on consumables.


A photo scan from the flatbed produced a moderate image at the machine’s default optical resolution of 1,200 x 2,400ppi. The picture showed some grain and, ironically, a cast into red and magenta.


Each drum and toner cartridge is a two-part consumable, as the toner has a yield of 1,400 pages for colour and 2,200 pages for black, while the drum units should be good for 15,000 pages. There’s also a transfer belt and waste toner unit, both of which have a service life of 50,000 pages. Although there are four separate consumables, the long service life of the belt and waste unit means you’ll probably only need to replace them a couple of times during the life of the machine.


Assuming the problems we had with colour print were isolated to this particular review sample, as we strongly suspect, this is a serviceable office workhorse for colour printing, copying and scanning. Even so, the fact we couldn’t quickly cure the problem must put some question mark over the reliability of the machine. A front-panel USB socket would also be a useful addition for direct scanning and printing.