Brother has put its latest mono laser print engine into a number of different printers and multifunction machines in several product ranges. The DCP-7030 is at the lower end of its triple-function range, which provides colour scanning and mono copying, as well as mono laser print.


Although the flatbed scanner positioned on top of the print engine is a bit wider than the printer itself, Brother has engineered a gentle expansion in its lines, so the unit has a well-integrated look. It sits quite squat on the desktop, as well, so is unobtrusive in a home office or small business environment. Although there’s no automatic document feeder on this model, the flatbed includes a separate glass strip at the end of the flatbed, normally used when feeding paper for scanning. This makes the scanner section wider than it otherwise need be. 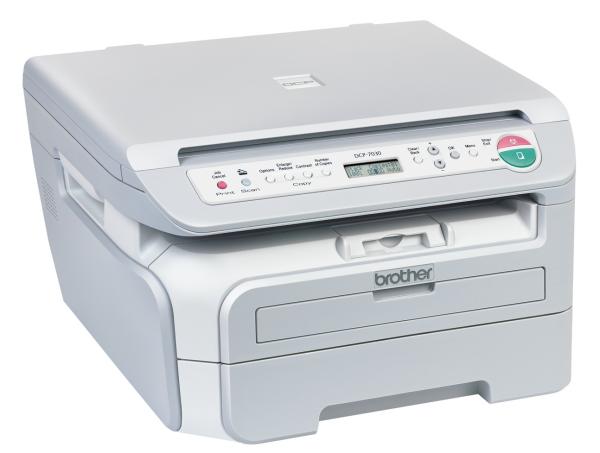 Coloured in pale grey and cream, the device looks a bit less severe than some of the black and silver units on offer and its control panel is commendably simple. Although the copy function panel includes enlargement and reduction, contrast adjustment and up to four pages per sheet, the single row of buttons is easy to understand and the large Start and Cancel buttons at the right end of the row are hard to miss.


The 2-line by 16-character LCD display is well used, but is sorely in need of a backlight. Even when standing directly over the machine, reflections can make it very difficult to read and if you have it on the desk beside you, characters can sometimes be impossible to make out.


The whole of the scanner section hinges up to cope with papers jams, though we had no problems during testing. It doesn’t need to be lifted to get at the drum and toner cartridges, though, as these slide in from the front, once the front cover has been folded down. The only sockets at the rear of the machine are for mains power and USB 2.


The software bundle installs in one simple operation from a supplied CD and includes Nuance’s PaperPort document management and OmniPage optical character recognition applications. There’s a quick and simple Control Centre application from Brother itself, as well.


The drum and toner, although in separate cartridges, slide into place as one and you’ll be able to replace the toner roughly six times, before needing to swap out the drum cartridge as well.

We’ve tested this print engine of Brother’s twice before, in a standalone printer (HL-2140) and a business multifunction, with all the extras for fax and wireless connection (MFC-7840W). This machine, although simpler in design, shares very similar performance with these other models.


Brother claims print speeds of up to 22ppm for the DCP-7030, but the test machine took 22 seconds on each of our five-page test documents – straight text and text with business graphics. This equates to 13.6ppm, some way off the quoted figure. 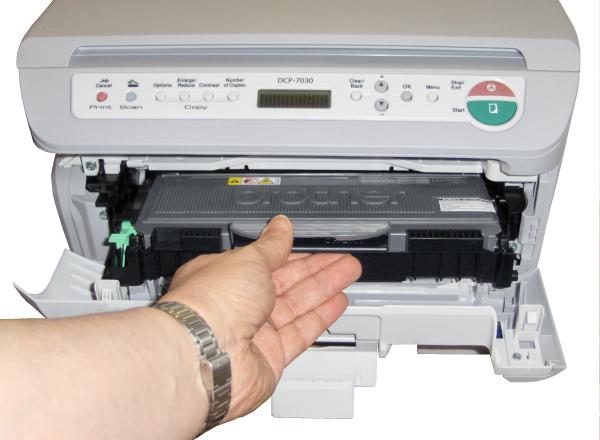 We normally assume the manufacturer’s quoted speeds are derived from print tests in draft mode, but Brother doesn’t include a draft mode, as such, in the driver. We tried reducing the resolution to 300dpi, turning on toner save mode and selecting Office Document (ie no graphics) as the print type, but this made no noticeable difference to the speed we saw.


A single page, A4 copy took just 12 seconds, which gives the machine a copy speed of 5ppm, a bit faster on larger copy jobs. That’s pretty good going for a digital, laser printer-based device, particularly one costing under £120. The time to print a 15 x 10cm photo, 14 seconds, is also impressive for a machine in this price band.


Print quality, as from the other machines using this engine, is very good, with clean black text showing no signs of spatter or other print irregularities. Even small point sizes look clean and evenly printed, using the printer’s default resolution of 600dpi.


Moving onto greyscale graphics still shows the machine as capable of clean, smooth output, clearly defined and with good registration of black over grey. The test photo print reinforced this opinion, as areas of grey showed little sign of banding. There was some loss of detail in shadow areas, but generally the photos would be good enough for general use in office documents.

The only drop-off in print quality is when copying documents with areas of greyscale fill. The greys then start to look very patchy and not nearly as regular as the originals from which they’re taken.


There are just two costs to running the DCP-7030: toner and the drum unit. Using the high-capacity toner cartridge, which should provide 2,600 ISO pages, and the 12,000 page drum gives a page cost of 2.83p, which sits in the middle of the range for mono laser print.


This is a very serviceable multifunction printer, built around a solid print engine that should give good service without costing the earth to run. Print quality is excellent for a laser printer in this price range and maintenance is commendably simple. A complete multifunction printer for SOHO use at just over £100 has to be a good buy and the DCP-7030 matches up to several, more expensive devices.