Whipping up 1kg of homemade chips using half a tablespoon of oil, as well as baking and sautéing other dishes, the Breville Halo+ makes cooking low-fat meals simple. However, where the Halo+ goes one step further than other health fryers is with its design. Not only can you cook with it flat, or with a rack in place for grilling and roasting, it’ll also tilt forwards – moving food around the specially shaped bowl for even cooking. A final flourish is the bowl’s non-stick DuraCeramic coating, which is scratch-resistant and helps with heat distribution. 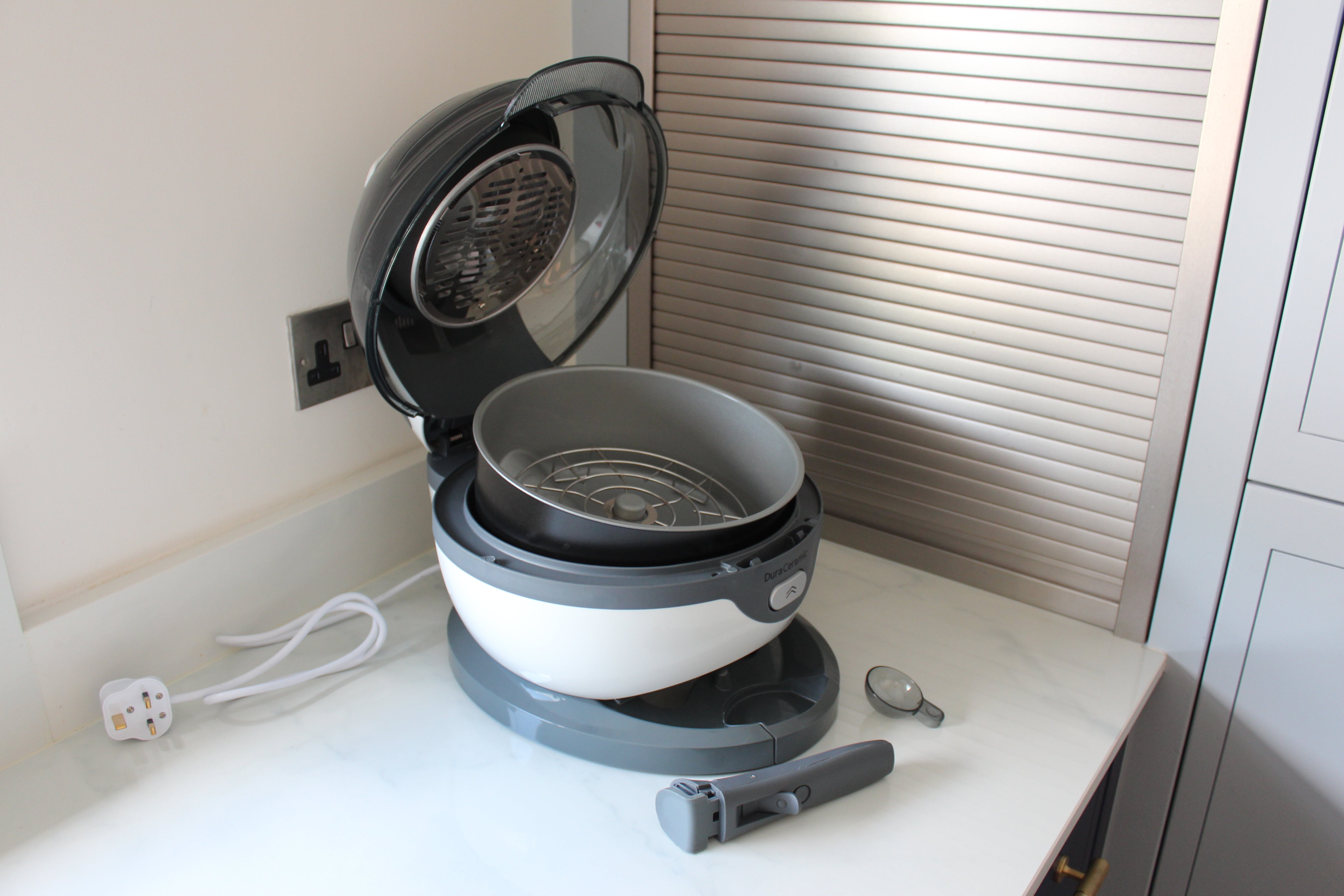 While it takes its lead from the original Halo by using halogen heating, the Halo+ is more stylish outside and cleverer inside. It cooks 28 per cent faster than the Halo using two elements – above and below the bowl – to create an effective mixture of fan-assisted convection and radiated halogen. This means you can either opt for dual heat or overhead cooking, using one of two buttons. There’s no option to select a different temperature, though, so the only way to control results is by toggling the time in minutes using plus and minus buttons (the maximum is 75 minutes). Cooking can be paused and restarted by opening and closing the lid or cancelled by holding a heat button. Tilting the fryer ‘tumbles’ the food – this is controlled by a pull-out-and-turn dial at one side, with a chip symbol for the titled position and fish symbol for flat. There’s a drip tray at the front to collect any fat run-off, a lid release button and two buttons at the back that allow the lid to be removed for cleaning. Once cooking is complete, it’ll sound an alert and automatically shut off.

Breville Halo+ 1.25kg DuraCeramic Low Oil Health Fryer – What’s it like to use?

The Halo+’s recipe book provides plenty of ideas about what can be made in the fryer – even desserts – as well as cooking tips. Starting with the recipe for homemade chips, after preparing 800g of potatoes, I placed them in the fryer and drizzled over a spoon of oil. This required the fryer in the tilted position and advised a time of 25-30 minutes on dual heat. I set it for 25 minutes. The bowl has a large ridge inside and rotates as it cooks rather than relying on a paddle or stirrer. What I found useful is that when the halogen light was on from above, I was able to see the progress of the chips. However, it switches on and off intermittently, so it was also worth popping the lid open to check they weren’t burning (it won’t stay open when tilted). After 25 minutes, the chips were almost cooked but there were still some patches of pale potato. I set it for five more minutes. Once this had elapsed, the chips were beautifully golden with the thinner pieces brown and crispy and the larger ones softer. The chips had a sizzling aroma that was irresistible. I attached the handle to the bowl to remove it – the jaw-like mechanism is a bit fiddly to use, though. Next, I made meatballs, in the level position. The recipe didn’t specify how much oil to use but I opted for a minimal drizzle. I set the timer on dual heat for 15 minutes. 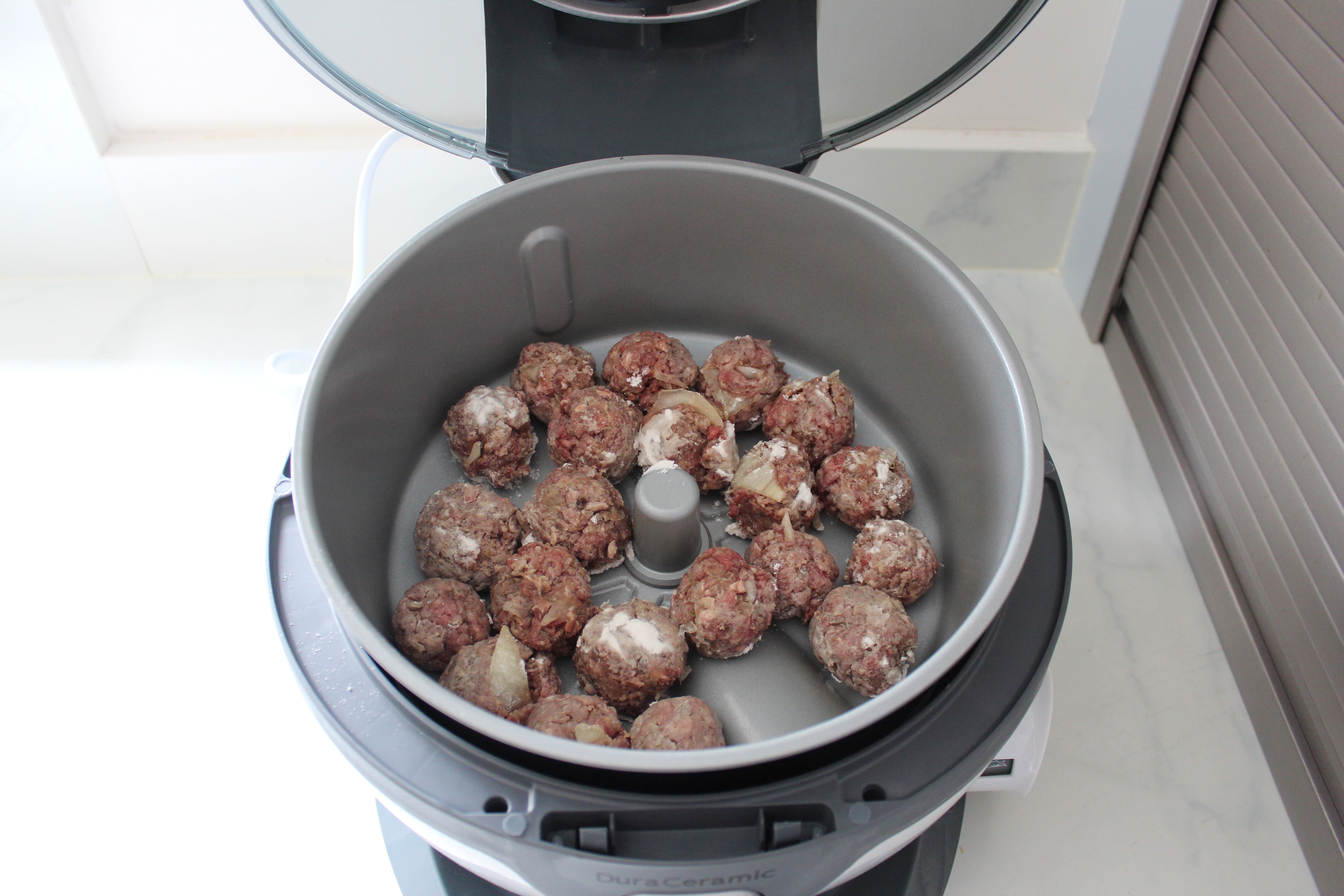 The meatballs needed turning halfway through, which was tricky as they skidded around the non-stick bowl. That said, the process proved much easier than frying meatballs conventionally as after 15 minutes they were evenly browned. 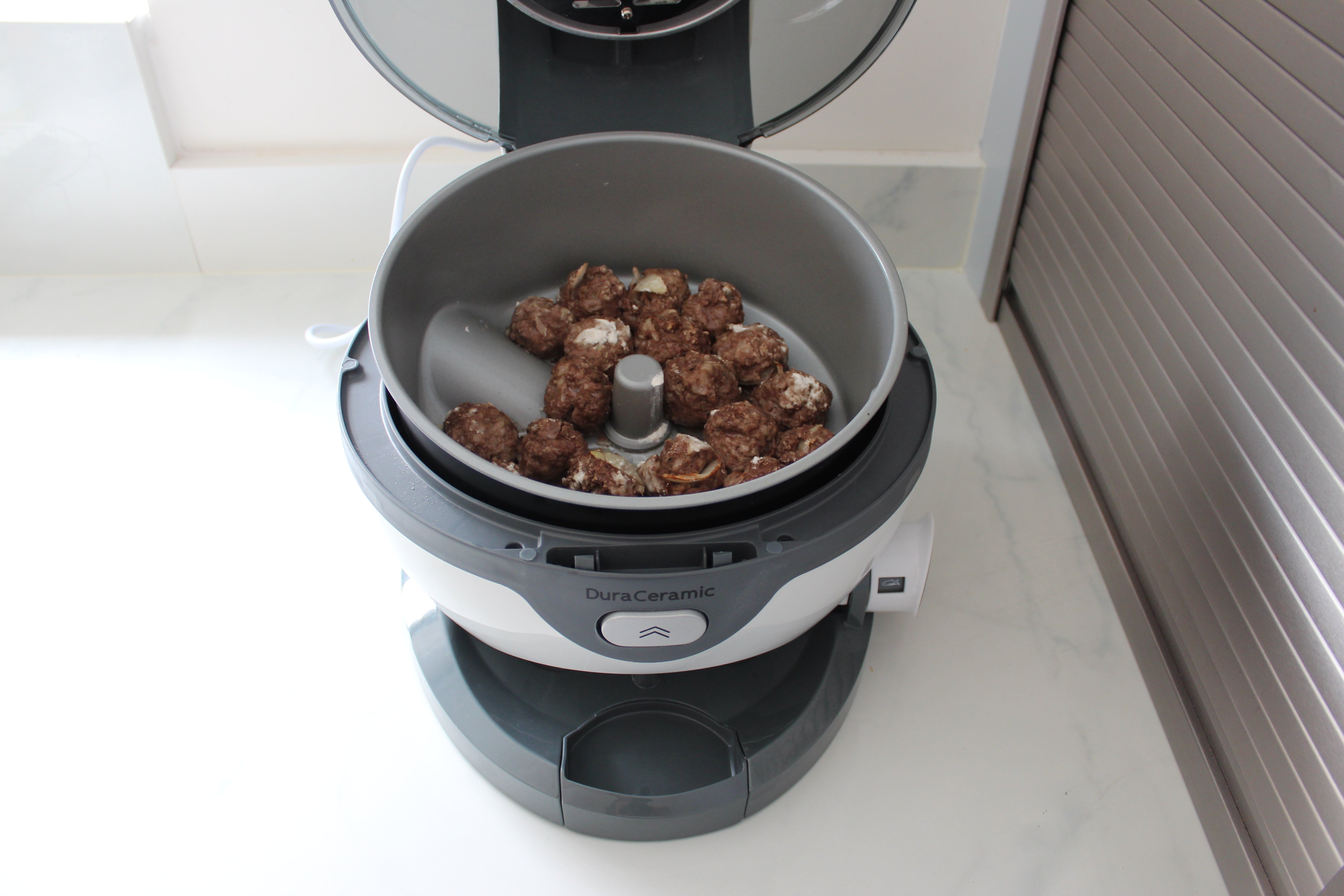 Keeping the fryer level, I then used the roasting rack to cook flattened chicken breasts. 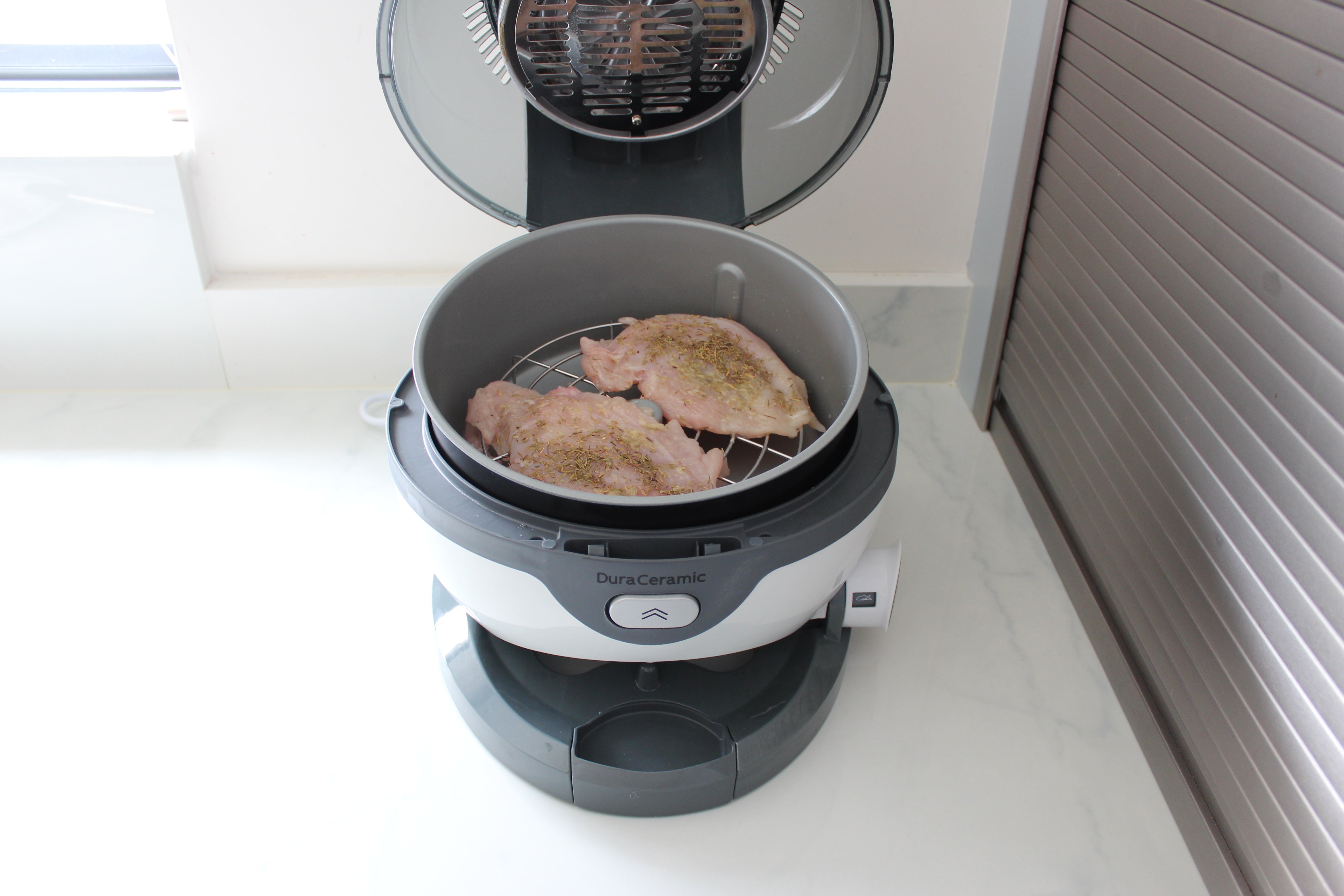 I set it on dual heat for 20 minutes, turning the chicken halfway through. One feature I liked is that the bowl still rotates with the rack in place for even roasting but the food isn’t tumbled. Ten minutes in, the garlic on top had charred but the chicken was cooking well, with only the edges browning. I stopped the timer three minutes from the end as I felt that the chicken would become dry. It was moist and tender, with only a little dryness at the edges. 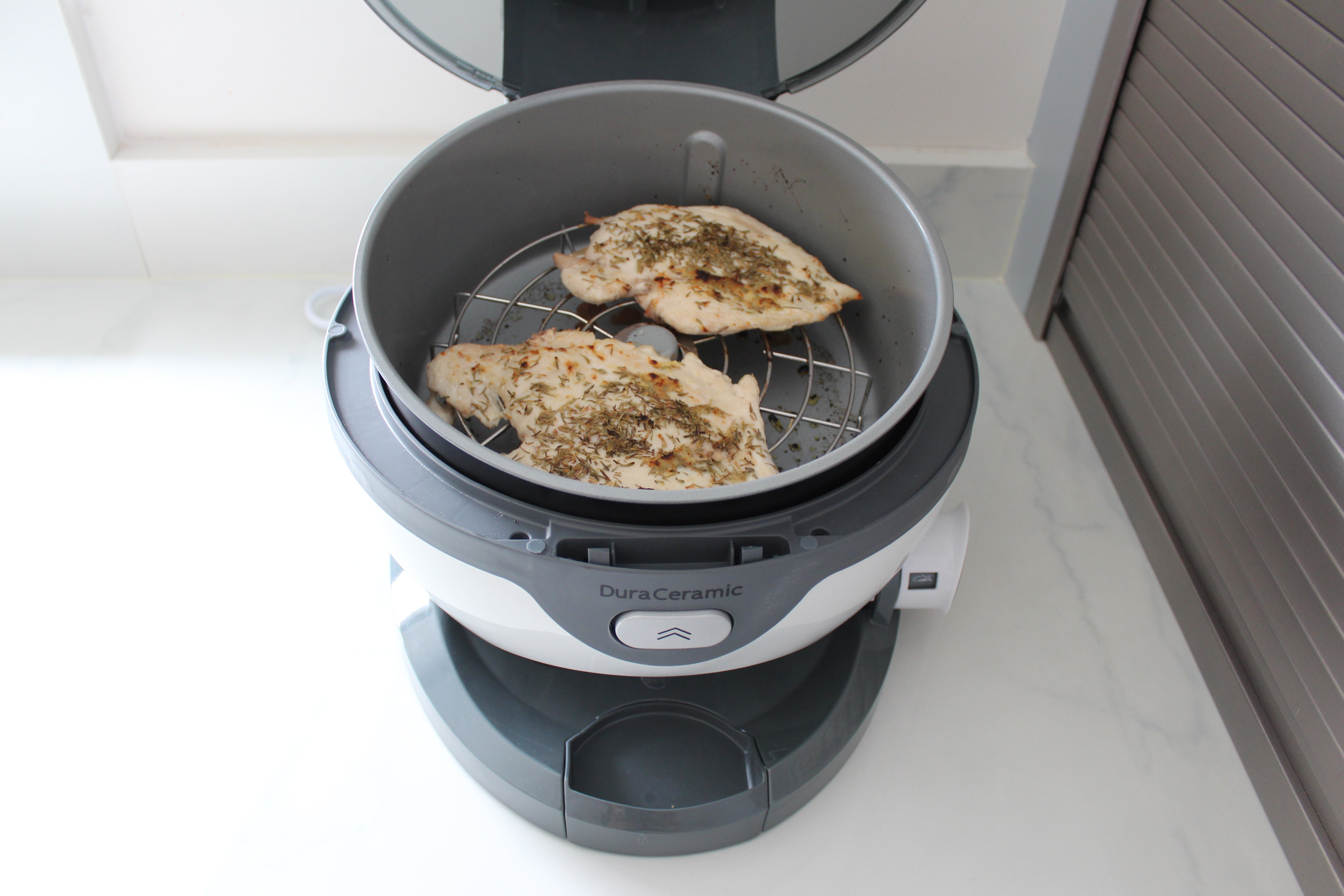 I finished by making cupcakes with the fryer flat and the bowl lined with foil. I used dual heat to bake them for 11 minutes. After the time had elapsed, the cupcakes were golden on top, although they had risen better in the centre. The middles were fluffy and light, with the edges more stodgy. Considering that there was no preheating, the baking was rapid and effective. The rack, lid and spoon could be cleaned in a dishwasher but the bowl had to be washed by hand – although the coating makes this simple. The only time it needed soaking was after the chicken, when there was some baked-on debris.

If you’re keen to trim some fat from your diet or make speedy meals for the whole family, it’s worth making some space for this multi-talented fryer. Its grill-only function and rack are handy for reducing the fat of bacon or cooking fish. Being able to toggle the temperature would be a plus, and it’s still quite a big machine – as well as requiring space for the lid to open, it also needs a little room behind to use in the flat position. But as health fryers go, the Halo+ delivers plenty for the price.