What is the Bowers & Wilkins 684 Theatre?

Bowers & Wilkins is a name usually associated with high-end audiophile speakers, but its entry-level 684 Theatre system is proof that you don’t need to be a Russian oligarch to sample the iconic brand’s wares. We’re not talking peanuts here, but considering the brand’s flagship Nautilus speakers sell for around £55,000 this system’s £2k price tag seems comparatively reasonable.

The 600 Series has been around since 2008, but the revamped range boasts six new models, all of which blend established technologies from the original series with fresh innovations designed specifically for this system.

The package on test here is the 684 Theatre, so called because it features a pair of 684 S2 floorstanders (£799) for the front channels. Joining them is a pair of compact 686 S2 speakers (£349) for the rears, the new HTM62 centre speaker (£399) and the ASW610 subwoofer (£499), which remains unchanged from the original 600 Series apart from an updated finish to match the new speakers.

A pricier second package, 683 Theatre, swaps the 684s for larger 683 S2 floorstanders and upgrades the centre and sub to the HTM61 and ASW610XP respectively. These packages aren’t set in stone though – you can mix and match.

SEE ALSO: Our pick of the Best soundbar 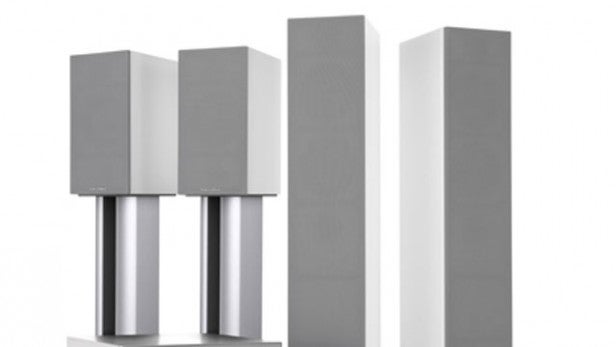 Looks-wise, the whole system exudes quiet sophistication. There’s nothing showy about the cabinet shapes or finishes – in fact it’s all fairly run-of-the-mill – but their simple exterior belies the beautifully engineered speaker tech lurking within.

All of the models come in two different finishes – we were sent the low-key Black Ash version, but the White is a little more disco. The faux wood veneers have a smooth yet synthetic feel, which is a little reminder of their ‘affordable’ status, but on the whole we have no beef with their build quality. They’re also rather heavy, which is always reassuring.

SEE ALSO: Our pick of the Best soundbar 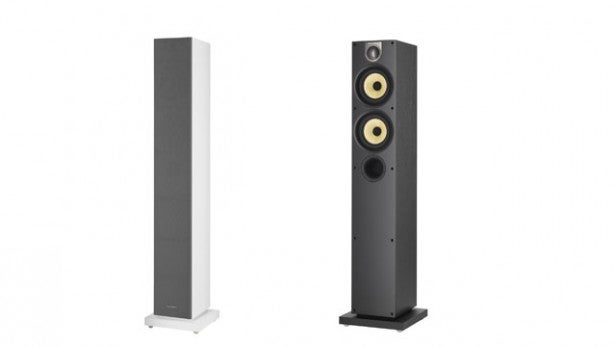 The 684 S2 floorstanders should be easy to integrate into any room. At 160mm wide, they’re slimmer than previous incarnations, which will be a blessing if space is tight, while their classic straight lines, painted baffles and black grilles provide the right blend of elegance and neutrality.

In the box is a plinth that screws onto the bottom, adding stability and finishing the look off nicely. You can also attach spikes if placing the speakers on carpet. Like all of the speakers in the system, there are two pairs of binding posts on the back, which allow for bi-wiring.

The 686 S2 rears are the most compact speakers in the range, measuring 160mm wide by 315mm high. That makes it possible to position them around the room on shelves or furniture, but for the best results we recommend mounting them on suitable stands or on the wall using the built-in brackets. Apart from the size, the form, finish and build quality are identical to the 684 S2.

The HTM62 is the speaker most likely to pose installation problems – its large, chunky cabinet could be tricky to slot into an AV rack. It is, however, elegantly styled and impeccably constructed. 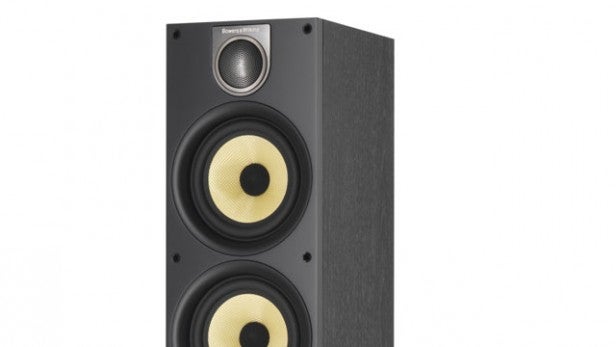 The ASW610 boasts a rubberised black finish not found on any of the other speakers, but from afar there’s no sign that it hails from an older range. What’s more, build quality is top-drawer and its compact dimensions make it surprisingly manageable size-wise. In the box are spikes for carpet placement.

The subwoofer offers more customisation than most others, allowing you to find the right bass balance and compensate for resonant rooms. There are volume controls for line and speaker inputs and low-pass frequency control, plus switches for low-pass filter Bass Extension, EQ and phase. Inputs include speaker level binding posts and left/right line-level inputs. 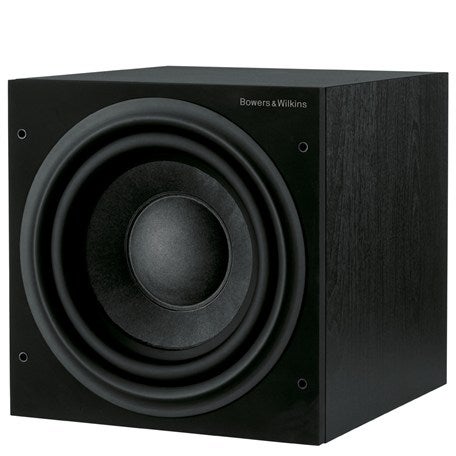 Unplug the grilles from the 684 S2s and you’ll uncover two eye-catching yellow 5in Kevlar fibre mid/bass cones, which are smaller than the original 600 Series’ 6.5in cones in order to facilitate the slimmer cabinet.

They also use smaller voice coils than before, with Anti-Resonance Plug dustcaps in the middle of the cone (borrowed from the company’s high-end PM1 speakers) that improve pistonic movement inside the voice coil to reduce distortion.

But the tweeter is where you’ll find the best innovations. It’s fashioned from two separate aluminium domes, one of which has its centre cut out and glued to the rear face of the first dome to increase rigidity without dramatically increasing the weight.

Then, the entire tweeter is placed in a gel-filled cavity that decouples it from the cabinet to remove resonance and vibration. Hence B&W calls it a Decoupled Double Dome Tweeter. It’s protected from curious fingers by a stylish metal mesh.

The 686 S2 and HTM62 use the same drivers, but arranged in different ways. The HTM62’s two mid/bass cones flank the 1in tweeter, while the 686s pair a Decoupled Double Dome tweeter with a single mid/bass driver.

For bass tuning, the fronts and rears use a front-facing Flowport tube (rear-facing on the centre), the inside surface of which is dimpled like a golf ball to smooth the flow of air. This also allows the 686 S2s to be wall mounted without affecting performance.

The subwoofer packs a long-throw 250mm driver, constructed from a mix of paper pulp, Kevlar fibres and resin, while power is supplied by a 200W Class D amplifier.

In action 684 Theatre delivers exactly the calibre of performance we’d expect from a £2k system – namely a sound that’s cohesive, smooth and detailed yet bursting with excitement.

Jumping straight into the training simulation at the start of X-Men: The Last Stand on Blu-ray, the 684 Theatre system goes hell-for-leather. It displays excellent dynamics, firing explosions and lasers around the room with a crisp, cutting edge. When Logan lops off the massive robot’s head, it hits the ground forcefully without sounding hard or brash.

B&W’s use of the double dome tweeter also pays dividends, as detail reproduction is superb. It finesses high frequencies with a crisp, natural character. As debris rains down after every explosion the high-frequency fizz feels lighter than air and realistic.

Its credentials as a kick-ass home cinema system are further boosted by the excellent ASW610 sub, which underpins every rumble, boom and bang with precise and beautifully weighted low frequencies. The depth and slam it delivers is frightening, and because it’s so tightly-fused to the 684 S2s, really big explosions don’t turn into a boomy mess.

It has a sensitive side too, lending velvety richness to Patrick Stewart’s voice and subtle warmth to background ambience and music. The HTM62 centre is a revelation, giving voices such presence and detail that it feels like the actors are in the room with you. 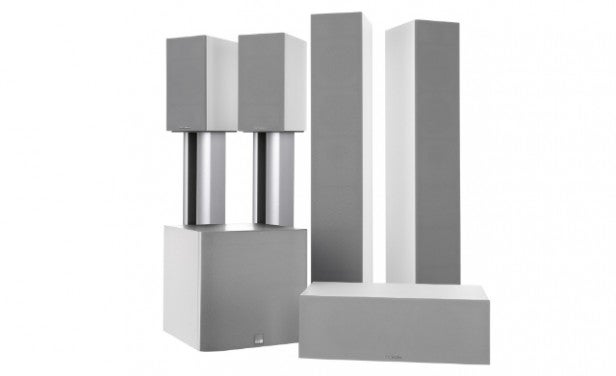 But what we love most is the ease and transparency of B&W’s sound. It’s like the system takes itself out of the equation, mirroring exactly what’s on the disc and immersing you in the film.

There’s no sense that the B&W is imposing itself – instead it lets the material do the talking, allowing effects, dialogue and music to emerge untainted, never hurried or shouty, unlike many cheaper one-box systems and compact packages. That means the chances of fatigue during a Lord of the Rings marathon are slim to none.

Also impressive is that you don’t need a mega bucks amp to drive this system, which is important given its ‘affordable’ billing. Our Onkyo TX-NR818 receiver easily drove these speakers with punch and scale to spare.

If we have any sort of reservation, it’s that the 684 S2s don’t deliver the biggest front soundstage we’ve heard from a pair of floorstanders, but in a 5.1 configuration the subwoofer adds all the size and scale you need, plus the pin-sharp clarity and wide dispersion of the 686 S2 rears adds up to an expansive, immersive stage.

It’s a terrific system for day-to-day music listening too. Again, its neutrality is a winner here, ensuring a faithful reproduction of our favourite test tunes. From the old-school jazz of Miles Davis to the pop stylings of Adele, it captures all the dynamics and emotion of the music while the agile subwoofer injects warmth and low-end weight.

And that’s just low-res tracks from an iPod – step it up to DVD-Audio, SACD and hi-res FLAC files and the B&W’s clarity and imaging are truly dazzling. 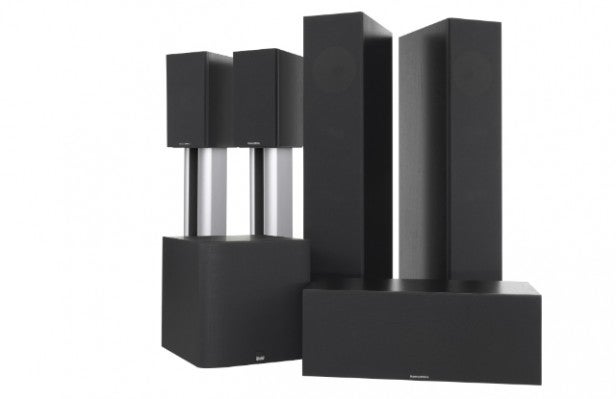 Should I buy the Bowers & Wilkins 684 Theatre?

With wonderful sound quality, low-key design and impressive driver technology, 684 Theatre is deserving of your hard-earned cash. You’re getting a taste of the stunning sound quality offered by B&W’s more expensive systems for a fraction of the price, and that makes it great value in our eyes.

On their own the 684 S2s aren’t the biggest-sounding floorstanders we’ve heard, but they do deliver the sort of refined sound you’d expect for the money, while the accomplished centre, rears and subwoofer play their part in a cohesive and exciting soundstage.