We all know that the sound quality of most flat-panel TVs isn’t great, simply because the sets are too slim to house adequately powerful speakers and amps. But if you want to boost sound quality without forking out for a 5.1-channel system, then a soundbar could be the ideal solution.


These clever devices are basically a bunch of speakers built into a single compact unit, which are designed to be mounted on the wall beneath your plasma or LCD TV in order to preserve the clutter-free aesthetic. 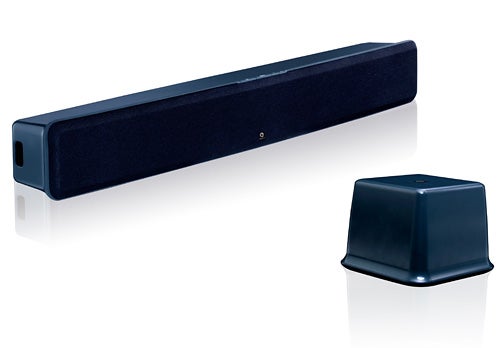 Boston Acoustics is the latest to launch one of these soundbars, but the difference with the TVee is that it doesn’t aspire to be a 5.1-channel system like some others do. The soundbar itself offers straight stereo output with nary a pseudo-surround mode or sound beam in sight, but it does come with a subwoofer to add an extra dimension to TV and movie viewing, and the best part is that the bass output is transmitted wirelessly so there are no unsightly wires to conceal.


The lack of cables makes the system incredibly easy to set up – the trickiest part is mounting the soundbar on the wall but if your DIY skills are up to scratch then it won’t be a problem. Each component has its own power supply which means you can place the subwoofer away from the soundbar anywhere in the room.

Your AV kit is connected to the analogue input on the back of the soundbar, but because there’s only one set of analogue inputs people with multiple sources should connect their TV’s audio output to the unit so it picks up whatever you’re watching.


The system doesn’t come with a remote control, but it can learn the control codes of other remotes. The process of doing this is fairly laboured and we couldn’t get it to work with our Philips 32PF9830 remote, making the lack of a dedicated remote control all the more frustrating. If you can’t get this to work either, then you’ll be stuck with the controls on the top of the soundbar, which include volume up/down and mute.

Both the soundbar and subwoofer have wireless ID switches, which allow you to change the transmission frequency if you have more than one TVee system in your home. The only other controls are a separate volume control on the subwoofer and a Trim Level switch on the soundbar that changes the input sensitivity of the unit.


The system’s build quality is exceptionally high. Both the soundbar and subwoofer are weighty and robust, thanks largely to the sturdy rubber trims and feet fitted onto both components. It’s not the most elegant or aesthetically challenging system ever created, but this is probably a blessing given that its brief is to blend in with other kit. The oddly-shaped subwoofer is styled in grey and pleasingly compact, which makes it easy to conceal.

Boston Acoustics has a respected audio heritage, and judging by the TVee’s superb performance it’s not hard to see why. We plugged in a Pioneer DVD player and let it loose with the recent DVD release of ”Poltergeist”, and the movie’s thunderous soundtrack was delivered with an astonishing amount of raw power.


Much of the credit for this goes to the subwoofer, which musters a tight and punchy bass output that melds beautifully with the soundbar, provided you don’t get carried away and set its volume too high. The ominous claps of thunder towards the start of the movie are particularly powerful, but the system really gets into top gear at the movie’s climax, driving the action along at breakneck pace. What’s even more impressive is that the system delivers this clean and convincing bass output without being fed a dedicated LFE channel, and we’re also pleased to report that there were no problems with the wireless communication between the two components either. 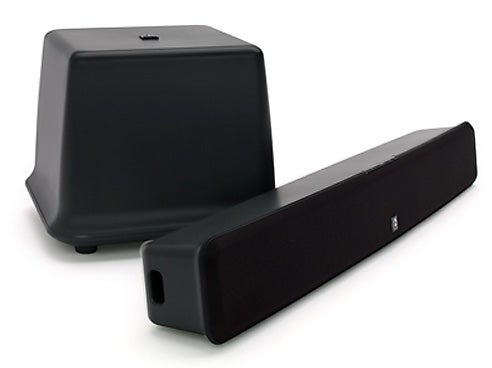 In addition, the soundbar’s excellent midrange and top-end reproduction gives the sound output a crisp and detailed edge. This greatly benefits dialogue heavy movies or TV programmes, which sound clear and audible even at low volumes. The lack of any pseudo surround or soundstage widening technology might make it seem less appealing than some rival soundbar systems, but given that these modes rarely live up to the manufacturer’s claims it’s refreshing to find a two-channel system that does exactly what it says on the tin.


Unsurprisingly, given the system’s stereo focus, music playback sounds superb. We tried our trusty CD copy of ”Kind of Blue” fed directly from our Pioneer DVD player, and the TVee handles the delicate jazz arrangements with far more sophistication than your TV speakers ever could. 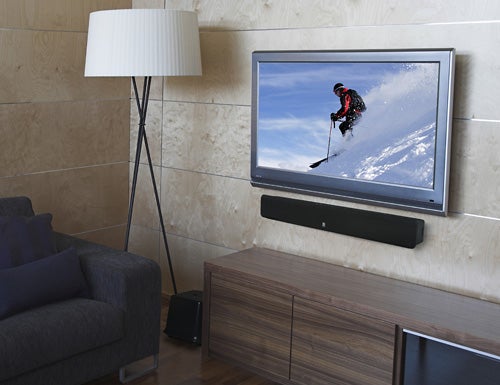 
What’s refreshing about the TVee is that unlike other soundbar systems it doesn’t pretend to do the job of a 5.1-channel system with disappointing virtual surround modes – it’s an unashamed two-channel system that makes stereo sources sound their absolute best. It’s well made, powerful and incredibly easy to install thanks to the wireless subwoofer, providing flat-panel TV owners with a classy, convenient alternative to a proper home cinema system.


And as an added bonus it’s a lot cheaper than other soundbar systems like the Philips HTS8100, though the lack of a dedicated remote, fancy sound modes and limited connections makes it seem like less of an attractive proposition. But the bottom line is stereo performance and on that score the TVee delivers the goods.