Being the world’s most famous Oscar-winning director definitely has its advantages. For example, If I approached one of my contacts at EA with an idea for a game, I doubt it would get past the first phone call. Mr Spielberg, however, ends up with a game (with his name) on the shelves.


The odd thing is that Boom Blox isn’t the epic, cinematic adventure you might expect from one of Hollywood’s most A-List A-Listers. Apparently, that sort of thing is being saved for a second collaboration to arrive on the HD consoles later on. Boom Blox has the odd cut-scene, but I doubt that Spielberg was directly involved in their creation, and looking at the visuals, I suspect Janusz Kaminski wasn’t called in to consult. As you can see from the screenshots, Boom Blox is cute, blocky, knowingly primitive and bright. To be honest, It would probably work on the DS without an awful lot of graphic downgrading. That’s fine. Boom Blox isn’t about pushing games forward as a visual or artistic medium. It’s one of those games that you can imagine springing from an idea, as if Spielberg had tried the Wii and said like “wouldn’t it be fun if we could do this?” 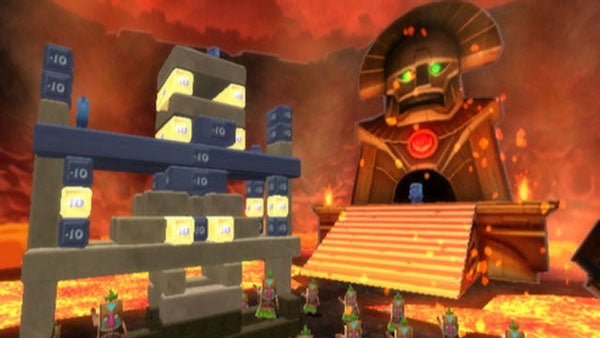 In a way, the game goes back to the simple joys of early childhood. First, you have blocks, arranged in innumberable structures, configurations and towers. Next you have tools and objectives. Sometimes you can pull at the blocks, and Boom Blox goes a bit like Jenga – you’re pulling blocks from the stack for points while trying not to collapse the whole structure. At other times, you get a ball. You throw it at the blocks, and your only aim is to get the gems on the top of the blocks on the ground using the smallest number of throws. On other levels, it’s up to you to clear the obstacles that stop some cute block critter from getting to its objective, or you’re hurling bombs at blocky bears so they can’t tear your buildings down. There are loads of variations, and one of the great things about Boom Blox is that it throws in idea after idea and twist after twist to keep things interesting. Even if you don’t like a particular game style, you’ll rarely find yourself doing it for any great length of time. 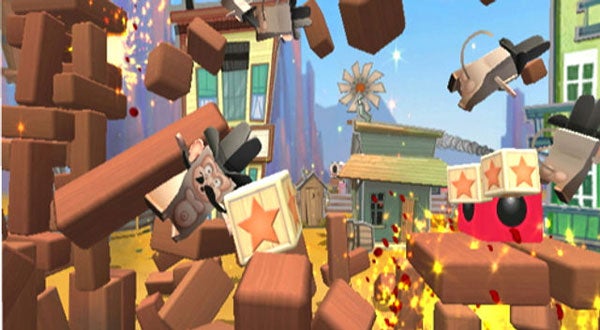 The tools themselves help make the game fun. In a lot of levels you’ll find yourself throwing balls or bombs at the blocks, targetting with a cursor using the Wii remote, holding the A button, then pulling back the remote and releasing the A button to hurl your missile. In the Jenga-style levels you select the block with the cursor then use the remote to slowly pull or drag it out. In yet more levels you get your mitts on a hosepipe or a laser, and use them to blast the blocks or spray them around on a stream of water. All this works because the controls are so brilliantly implemented. Anyone can pick up and play Boom Blox within about five minutes, and it’s one of those rare cases where the Wii controls and the whole game concept make a perfect match. As in Wii Sports: Tennis or Excite Trick, for example, there’s a real sense of physical connection – all that throwing, pulling and zapping just feels right.

Frankly, just throwing balls at towers of blocks is enjoyable enough for a while, but what makes Boom Blox intriguing in the long-term is the interaction between the tools and the blocks themselves. You’ve got your basic blocks, your gem blocks, your gold score blocks and your tough, hard to shift grey blocks, but you also get explosive bomb blocks, green chemical blocks (which explode when two or more come together) and purple disappearing blocks (these vanish on impact). 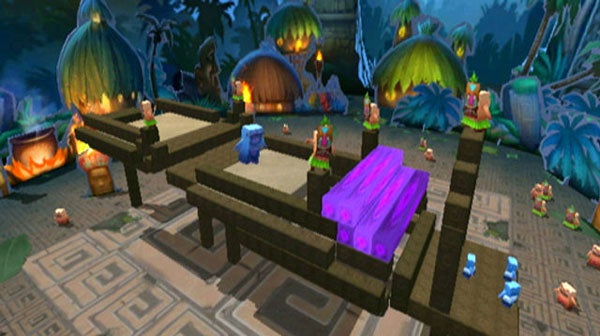 It’s all controlled by a fairly complex physics engine, and after the first few levels you realise that each puzzle is effectively a mechanism. Everything is in place for you to succeed, and all you need to work out is where to hit or what to pull so that the block structures roll, tumble, explode or scatter in the way that will achieve your objective most efficiently. Whether you get it right or wrong doesn’t matter too much. A quick restart is only seconds away, and there’s always something enjoyable about watching the blocks come tumbling down anyway. Maybe it all goes back to the toddler’s love of building and collapsing brick towers, but I’ve got more out of watching things fall apart in Boom Blox than I have in half the big action games where rampant destruction is supposed to be the key selling point. 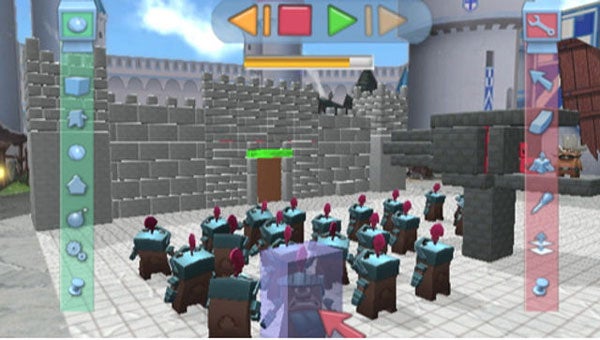 Without good level design – or good puzzles – all of this would be absolutely meaningless, but this is another area that the game gets spot on right. In the game’s Explore modes you can play through several sets of puzzles, each one concentrating on a particular tool or block type, and each set graded in difficulty. On top of that, each puzzle also has a choice of gold, silver or bronze awards. This is partly what makes Boom Blox a great family game: even the junior members can work through the game getting bronze, while tired dads can get a silver without needing to call on too much brainpower. The golds, however, can be a very different matter. Sometimes you’ll win one first time, but in other cases you’ll find yourself scratching your head, trying this approach then that, before someone wanders in, says ‘can I have a go?’ then cracks it on their first attempt. Sure, you can get through the whole game on silver, but will you be satisfied without the gold? I think not.

The adventure modes, meanwhile, are just plain weird. Here the puzzles are arranged in a number of ongoing stories, charting, say, an ongoing war between medieval sheep and bears or the gold-prospecting saga of a blocky, moustachioed beaver. I can’t say that the plotlines or characterisation dragged me in, but the puzzles are a different story, often combining block types and tools in a more complex and engaging way than the Explore mode. This does come at a cost, however. The storylines are divided into several themed sections, and there are a few that drag on a little bit more than they should. The adventures of Gorilda, a mother gorilla in search of her kidnapped offspring, could certainly have done with trimming back. 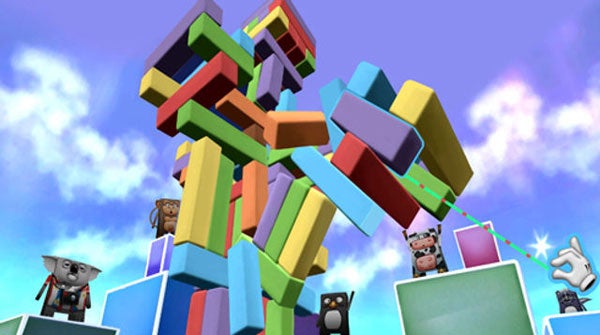 As a single player game, Boom Blox is thoroughly enjoyable, with enough meaty content to keep you glued to the screen for a couple of dreary days. It’s also, it should be noted, the kind of game that encourages audience participation, partly because it’s fun to watch, and partly because it’s even more fun to point out where someone else is going wrong (at least before they threaten to lamp you if you don’t shut your trap). However, I wasn’t so sure about its multiplayer potential at first. A lot of the Party mode’s level seems skewed away from the more complex and interesting puzzle solving and towards the more basic pleasures of ball tossing and shooting-range style games with the laser gun. Luckily, there are some more sophisticated cooperative and competitive options in there, and during the more difficult tower toppling or Jenga-like challenges, the game adds some real tension to the family-friendly fun. 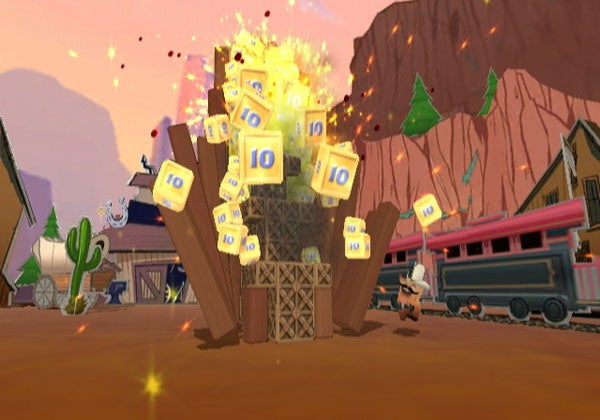 It’s the Create mode, however, that may be the key to Boom Blox’s long-term appeal. Even before you try it you’ll know it’s there, because the more you play, the more you’ll unlock blocks, tools, scenery and characters that can be used in it. At first, you’ll think it’s just a simple level editor – the sort of thing you’ll look at once then never touch again. Then you realise that the different blocks and the simple level-editing tools give it a bit of a Lego feel; constructing can be fun almost in and of itself. Finally, you try out the examples and work out that you can use the tools to create your own bizarre block-based mechanisms, at which point it’s like having the biggest and most spectacular domino-toppling simulation known to man – not to mention one which allows you to share your efforts with friends using Wii 24 connect. The only major disappointment is that there’s no online service where you can upload and download great puzzles or demolition showcases from other players worldwide. The game practically cries out for it. And while I’m on the subject, online Leaderboards wouldn’t have hurt, either. 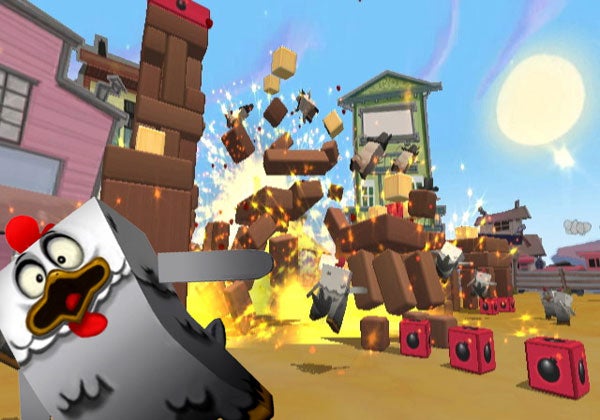 Still, these are relatively minor criticisms. Boom Blox isn’t quite a masterpiece, and there are times when its structure – one short puzzle, then the next, then the next – means you rarely get in the hypnotic groove that makes a truly great puzzle game great. In terms of sheer, simple, accessible fun, however, it’s one of the best third-party games on the Wii, not to mention one of the few family games on the system with any real longevity. With that in mind, I can recommend it without any hesitation. I wouldn’t like Mr Spielberg to give up his blockbusters, but his blox buster has certainly gone down a storm in my household. I’m confident it will do the same in yours.