Few RPGs that don’t bear the name ‘Final Fantasy’ have had to carry the same weight of expectation as Blue Dragon. On the one hand, this was the game that was going to sell the Xbox 360 to Japan. On the other hand, with character design from Akira Toriyama (Dragon Ball Z, Dragon Quest), music from Nobuo Uematsu (Final Fantasy) and game and story designs from Hironobu Sakaguchi (director of Final Fantasy I to V) it was also being heralded as the game that would tear the future of the genre from the hands of Square-Enix and drag the Japanese RPG into the high-definition era. In terms of the first goal, Blue Dragon was only a qualified success. It might have sold under 200,000 copies in a nation where a new Dragon Quest sells millions, but that’s still a whole lot more than any other 360 title has sold, and at least Microsoft’s game and console bundle was a sell-out. The 360 might still be a lame duck in Japan, but that’s hardly one game’s fault. 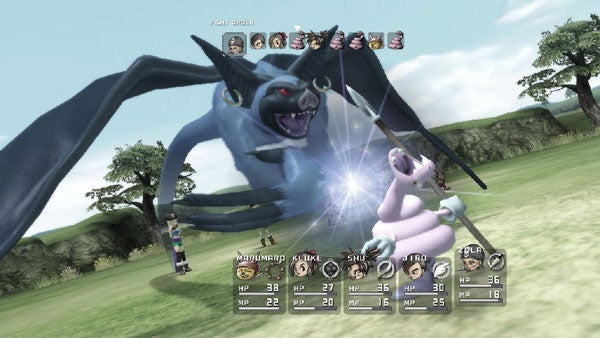 Sadly, in terms of the second goal, Blue Dragon is a major disappointment.


That’s going to matter to some of us more than others. In the West, we generally like our Japanese RPGs in the late Final Fantasy style – realistic graphics, angst-ridden heroes, twisting plots with a lot of ambiguity and double-crossing, lots of ornate shiny armour and huge cinematic battle sequences. Blue Dragon, by contrast, is closer in tone and style to the pre-FFVII RPGs of Square and Capcom or Dragon Quest VIII. It has a clean, cartoon style, a lighter tone and a slightly silly sense of humour. Its heroes are the large-headed, high-spirited youths of Saturday morning anime, and its visuals follow the same general style. A lot of gamers are going to dismiss it instantly as ‘one for the kids.’ 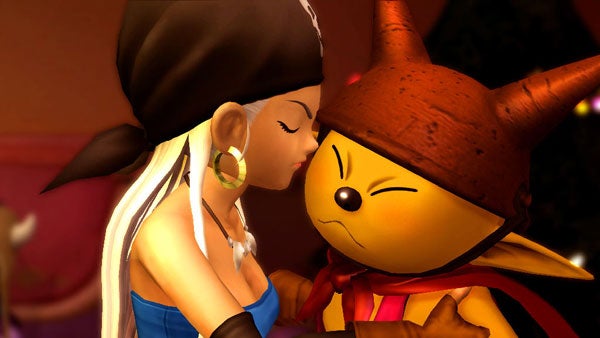 What might be worse, even on these terms Blue Dragon under-performs. It might have some beautiful, crisp HD visuals, but arguably the cel-shaded Dragon Quest VIII did a better job of creating a living, breathing cartoon world. When it’s great, Blue Dragon makes dazzling use of high-resolution textures, HDR lighting, reflective surfaces and post-processing effects, but when it’s bad – when you’re stranded in a dull landscape high on muddy textures and low on environmental detail – Blue Dragon looks like a hasty HD port of a PS1 era RPG. And it has to be said that whoever came up with the depth-of-field blur effect massively over-egged the pudding. In some sequences, so much of the screen is out of focus that you’ll start wondering whether you have the Mr Magoo P.O.V. option switched on.

Finally, it also has to be said that after Final Fantasy XII, with its slick semi-real-time battle system, programmable AI party members and intuitive targeting displays, Blue Dragon’s separate combat sequences and turn-based combat does feel like a big step backwards. Where Final Fantasy XII bridged the gap between the traditional Japanese RPG and Bioware’s more action-oriented western RPGs, Blue Dragon is very much a return to the classic style. It’s a wilfully retro piece of work. 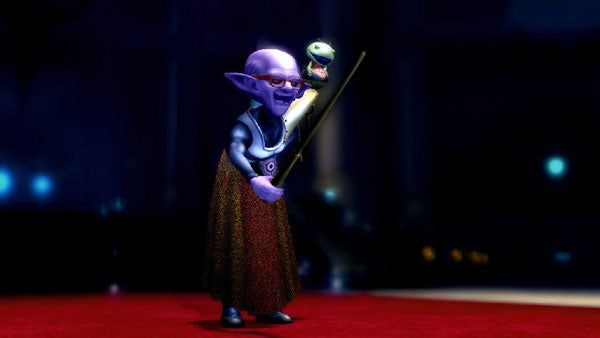 All the same, I wouldn’t write it off quite yet.


For one thing, Blue Dragon’s gameplay is a little less old-school and fuddy-duddy than it first appears. The meat of the game appears quite old-fashioned; your party – represented by the central hero, Shu – wanders around a world map or a more tightly-focused area map in third-person, in pursuit of particular objectives, while duffing up monsters and collecting loot and experience along the way. However, unlike, say, Dragon Quest VIII, monsters are visible on-screen at all times, meaning that you don’t have to endure the misery of countless random monster encounters on the way through every screen. Instead, you can choose most of your fights, running past some critters, deliberately engaging those who guard treasure, and ignoring any lightweights who flee at your approach. What’s more, by charging into combat with the X button held, you can occasionally catch your enemies off guard and get a free surprise attack.


Admittedly, it might help if there was some indication of how many monsters a particular roaming monster might represent – you can stampede in against a single skeleton to find him, three of his mates and a couple of other visiting beasties, presumably swapping stories of the existential pains of dungeon life – but at least every hour of gameplay doesn’t turn into a turgid swamp of constant scrapping against unseen foes. I wish I could say the same about, say, Dragon Quest VIII. 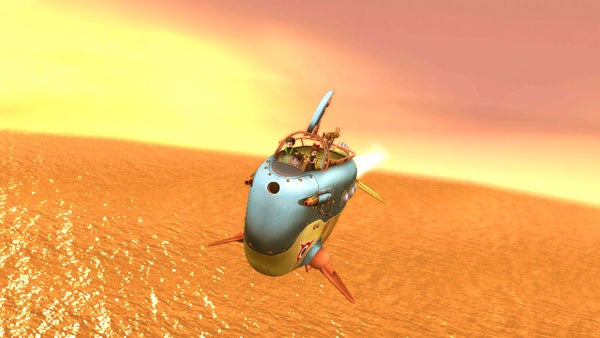 Secondly, Blue Dragon does combat differently from other games. The idea is that your teenage heroes don’t wield weapons and cast spells themselves. Instead, after swallowing magic globes early on they are able to harness the powers of a massive shadow creature; the titular blue dragon for Shu, and a minotaur and phoenix for his friends Jiro and Kluke. The shadow creatures do all the actual work of combat, and they also lend themselves to an intriguing, flexible class system. Creatures can be assigned certain roles (e.g. swordsman, monk or guardian) and these open up particular combat skills and spell-sets. Your heroes level up through experience, as per usual, but the creature classes ‘rank up’ independently. The effect of this is choice: you can switch between different roles for the same creature if you want the most versatile set of capabilities, or concentrate on a single role per creature if you want to maximise their combat potential in just one.

And while the combat is turn-based, there is a certain real-time element. At the top of the screen there’s a strip of icons explaining the current order of attacks. However, certain attacks can be charged up by holding a button. This maximises damage as the gauge builds, and also allows you to score a critical hit if you release at the right spot. The downside is that you have to carefully balance how hard you hit by when you hit. Charging up delays your attack, which may mean that you run the risk of an enemy hitting you with a special attack and putting your character out of action in the meantime. The upshot of this is that, while you don’t have to worry about range or movement, Blue Dragon still involves more strategy than you might expect. 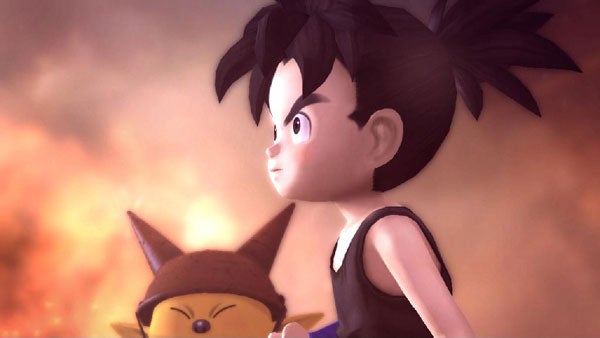 Cleverly, all the complex mechanics are drip-fed in during the early stages of the game, making Blue Dragon one of the more accessible Japanese RPGs around. Combine this with a nice, gentle difficulty curve, the ability to warp instantly between many locations and ample save points and you have a far less frustrating experience than Final Fantasy XII or Dragon Quest VIII, and one which might sit bitter with younger players or RPG noobs. In fact, Blue Dragon can be forgiving to the point of fault. Some areas become a grind of uninteresting, unchallenging monster encounters, and even many boss battles can be cracked on the first attempt with a modicum of skill. The game politely checkpoints your progress before each boss encounter (please take note, Square-Enix) but in fact the only reason to fear the boss is (please, no, don’t make me go through it again) the music. 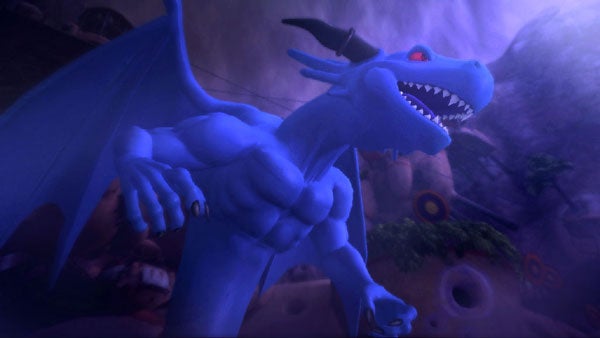 Don’t get me wrong. As you’d expect from a name like Nobuo Uematsu, the overall standard of the score is very high, with a nice run of haunting melodies, big, bombastic battle tunes and grandiose themes. Sadly, for the boss battles we get a lumpen chunk of ‘classic rock’ with vocals by Deep Purple’s Ian Gillan that will make you cringe each time you hear it. There’s a bit about ‘memories of forgotten luuurrrvvvee’ that is possibly the most excruciating spot of cheesy metal I’ve come across since the glory days of Saxon and Manowar. I really hope that nobody out there takes that as a recommendation…

Despite this, and despite all my earlier criticisms, Blue Dragon works for the reasons that all good Japanese RPGs work: it has a good story, strong characters and a boat-load of charm. I know some people are going to dislike the fourth playable hero, Marumaro, a pot-helmeted, crimson-caped chubby runt who runs high with what you might call the Jar-Jar Binks factor, but even he proves endearing with time. And if the main characters and villains fall back on generic stereotypes, they are at least well drawn variations of the usual themes, with their own offbeat quirks and underlying virtues. The plot kicks off with a big opening, but doesn’t lay all its mysteries bare at once, and the action is propelled along with beefy cinematic cut-scenes, a decent script and lively voice-work. To be honest, I found Blue Dragon more instantly engaging than Dragon Quest VIII. Don’t throw stones, members of the RPG hardcore. It’s only one man’s opinion. 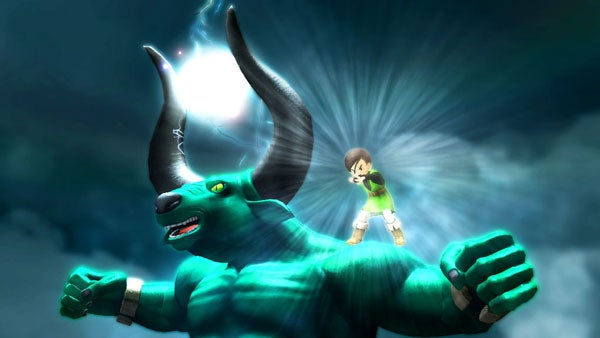 In the end, that might be Blue Dragon’s biggest problem. Some players are going to find it hateful, childish or painfully disappointing. Fans of Final Fantasy may find it utterly laughable, and some of the biggest fans of the Japanese genre are going to think it a bewildering waste of cash, time and talent. Yet if it is backwards-looking, and in some areas lacking in graphical finesse, Blue Dragon is also one of the most streamlined and enjoyable Japanese RPGs around. On the 360, that makes it unique. That’s why I’d urge anyone with an interest in the genre to give it a try – ditch your expectations, and you might just like what you find.


Don’t go into it expecting Final Fantasy. Instead, think of a big, brash, Japanese cartoon, stuffed with warmth and charm, and structured around some brilliantly engineered gameplay.