The Blackbox i10 noise-cancelling earphones are one of the uncommon products we get through the TrustedReviews doors that leave us wondering “why hasn’t someone thought of this before?” It’s entirely possible that there’s a good reason no-one else has thought to power a pair of noise-cancelling earphones over Apple’s proprietary dock connector, but it certainly sounds like a good idea in principle. 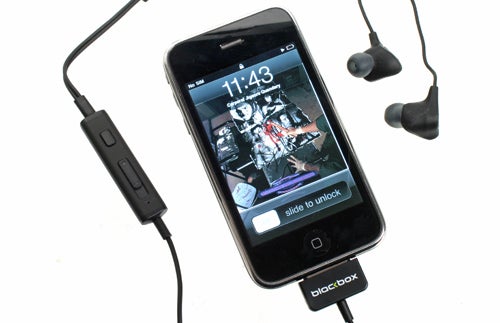 There is one big caveat to the Blackbox i10 earphones’ modus operandi, in that they’ll only work with an iPod or iPhone. And, in fact, with an iPhone you’ll get a lovely error message saying that these aren’t intended for use with one; although ignoring that hasn’t caused our untimely death so it’s probably safe to do so. Using the dock connector’s audio output also makes the on-device volume controls non-functional, but there’s an in-line volume control to solve that problem, which also has a push-to-hear button that mutes your music and lets you listen to what’s going on around you.

The microphones which the i10 earphones use to pick up on external sound are built into the earpieces themselves, which makes them pretty bulky. Nonetheless, they fit comfortably into the ear, and remain comfortable even after extended use. Placing the microphones in the earbuds works well, as the noise being cancelled is what you’d have actually heard. 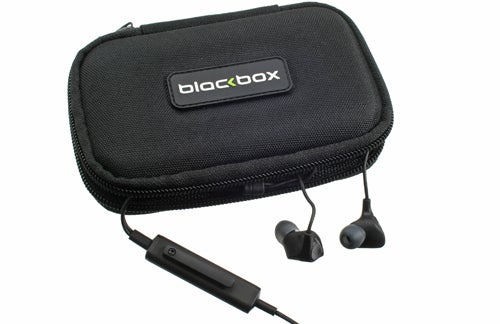 As well as the i10 earphones themselves Blackbox also supplies a hard carrying case which will also fit your iPod. While there’s some merit in offering your earphones and player a bit of pretection while crammed into a bag, it’s unlikely that most buyers will do anything bit discard this ‘added value’ accessory, making it a little bit pointless. A smaller soft case for just the headphones themselves would’ve been a safer bet.

The Blackbox i10s do a pretty decent job of shutting out noise passively, as the silicone tips give a good seal. Start playing some music, however, and the active noise cancellation kicks in and delivers a much more comprehensive level of isolation. As ever it’s much more effective with low-frequency ‘humming’ noises – such as the office air conditioning unit – than with the sporadic noise of, for example, typing on a keyboard. That said; the attenuation is good enough that you’ll definitely want to look both ways three times before crossing a busy road.

The effectiveness of the i10 earphones’ noise-cancelling would be all for naught, were they not to also sound pretty good. Fortunately, they don’t do too bad a job. There’s a definitely over-emphasis on the bass end of the spectrum, but it’s not overwhelming – and many listeners will prefer that bias, anyway. Mid-range clarity is pretty good, with decent detailing and no noticeable distortion, but the high end is the weak spot with cymbal crashes in particular falling prey to sibilance which can mar the whole experience on some tracks.

So we’re not talking Grado levels of clarity and detail here, but the i10s are in the same ballpark as other noise-cancelling sets in the same price range, such as the Creative EP-3NC earphones. Obviously the utility of the Blackbox i10 noise-cancelling earphones is limited by their use of a dock connector. We reckon that for iPod owners the practicality of not having to find batteries to power the earphones more than makes up for the inconvenience of not being able to use them with another device.


While there are other, better-sounding sets available for the money, the noise-cancelling properties of the Blackbox i10 earphones’ and their neat trick of connecting via your iPod’s dock port gives them something of an edge over the alternatives.