With all the fuss surrounding the arrival of the Storm it’s easy to forget that most people still buy a BlackBerry to keep up with their email while on the move and aren’t all that fussed about it’s other myriad of features. The Curve 8900 is designed to appeal directly to these folks, as it takes the classic Curve design and updates it with a few useful tweaks.


Out of the box the 8900 doesn’t look all that different to previous Curve models as it’s got many of the same raw ingredients. As ever the front is split pretty evenly between the screen at the top and the full QWERTY keyboard at the bottoms, with the mini trackball holding court in-between. Look a bit closer, however, and you can see that RIM has made some subtle changes. For starters the chassis looks a lot classier as there’s now a chrome band that frames the front of the phone with a glossy black finish used for the face of the handset.


The 8900 is also noticeably slimmer and lighter than its predecessors and two buttons have been added to the top of the chassis for putting the phone in and out of silent mode and switching the keylock on and off . As they’re flush with the case (the top part of the case seems to act as a kind of elongated rocker switch) they take a little getting used to, but keeping them flush does at least give a sleeker look. Another welcome tweak is that the handset includes a standard headphone jack rather than the propriety one used on previous models. 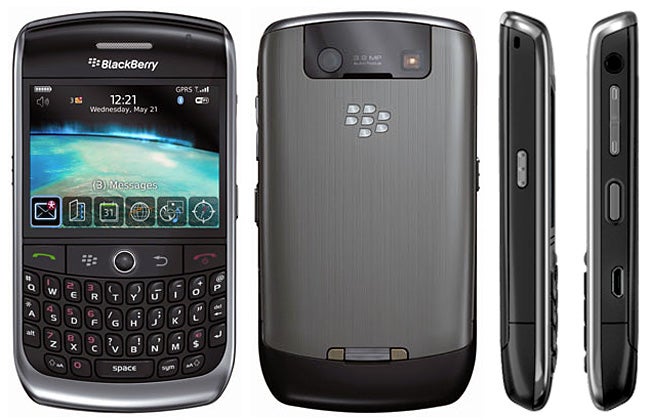 As the device is physically smaller than previous models, the screen has also been reduced in size slightly, but this is offset by the fact that RIM has upped the resolution to 480 x 360 pixels. As a result text and graphics look exceptionally sharp, and colours are also very vibrant making pictures and movies look really stunning too.


The 8900 is also the first device to feature RIM’s new ‘Atomic’ trackball which has been redesigned to be more resistant to dust and dirt and also to have smoother action. It certainly feels smoother under your thumb or finger, which makes it faster to scroll around webpages or through lists of text and icons.


The keyboard also seems to be slightly smaller than on the previous models, but it’s still one of the best found on any mobile device. In part this is because it has individually raised keys rather than a single membrane as on some smartphones, but it’s also because the keyboard layout is well thought out and the keys are just so tactile. It really is great for tapping out emails or entering webpage addresses.


Internally there are some changes too. The 8900 features a faster processor as RIM has moved it over from the 312MHz model used on the 8200 series to a faster 512MHz processor here. And while the 8900 doesn’t feel quite as speedy as the Bold, it is faster than most of the other devices in the BlackBerry range and definitely feels very zippy when you’re using it.

The handset’s memory has also been boosted to 256MB and the memory card slot now takes cards of up to 16GB in size. The card slot is found under the battery cover and has a bit of an odd design. To get a card out of it you have to slide it out of a recess that’s tight up against the SIM card holder. Elegant it is not, but at least it does let you hot swap cards.


For taking snaps the 8900 has a 3.2-megapixel camera with autofocus and an LED flash. It’s a significant improvement on the 2.0-megapixel camera used in the previous Curve models, but it’s still not all that great. When you transfer shots to a computer you can see that they lack fine detail and suffer from some colour fringing.


RIM supplies the handset with a pair of headphones that have built-in hands-free functionality. Unfortunately, they’re a tad uncomfortable to wear and the sound quality is about as good as a pair of headphones you might pick up down your local Poundshop. Luckily, as the Curve sports a standard headphone jack, you can use your own cans with it. With a proper set of headphones the sound quality is actually reasonably good, although not on the same par as the likes of the iPhone, as it doesn’t sound quite as warm and clean. 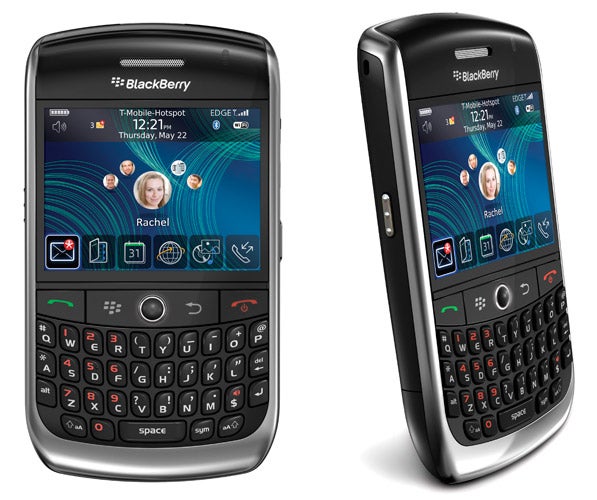 Like other recent BlackBerry models, the 8900 uses the new V4.5 of the company’s operating system. As well as fresher, cleaner icons this also has a neat feature where six shortcuts are added to the bottom of the standby screen to give you quick access to features like the media browser, email client and camera. All of these are customisable, so you can choose which apps are represented.


Obviously, BlackBerry devices are famous for their emailing abilities, and the 8900 is no different. It’s easy to set up with your current email account and there are now extra applications for instant messaging and social networking sites like Facebook. On top of this, there are a number of apps to let you open and edit Word, Excel and PowerPoint Office files. The standard web browser is also very good and although it doesn’t support Flash most pages load without any trouble and retain their standard formatting. As the phone also has onboard GPS, RIM has preloaded it with BlackBerry Maps software.


Throughout our test battery life was extremely good. We got around two and a half days out of it before it needed a charge. In fact, the only really big problem with the 8900 is the lack of 3G support. While this isn’t all that noticeable when you’re using it for email on the go, it is frustratingly slow when you’re trying to load web pages or use the BlackBerry Maps software when you’re out and about.


The Curve 8900 is a worthy successor to the previous models in RIM’s Curve range. This is because the company has managed to retain the DNA that made those devices so popular while also adding some neat extras into the mix such as the classier looks, faster processor and sharper screen. Sure, the lack of 3G is a disappointment, but whereas it would be a deal breaker on a lesser handset, on the 8900 it’s simply a bit of a distraction.