The original Bold (9000) has been one of RIM’s most successful handsets to date, and deservedly so. Combining distinctive looks with great build quality, easy operation, and a wealth of features, it still sits high on our list of top QWERTY keyboard-equipped smartphones over a year after its release. Nevertheless, with smartphone competition being so fierce at the moment a new model was certainly due and now it has been delivered in the shape of the Bold 9700.


Despite its heritage and name, the new Bold is actually quite a staid looking device. Gone is the completely faux-leather covered back with its metal camera surround, to be replaced by a much smaller patch on the back, while the chrome trimming round the front, though still present in part, is less distinctive. The whole device has shrunk as well, most noticeably in width, which is down from 66mm to 60mm. All told, RIM has toned down the look and feel of the Bold to the extent that a name change to Bland would feel more appropriate. 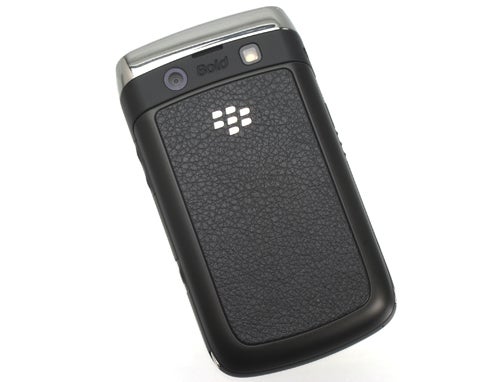 In truth, though, while the design isn’t as strong in theme, it remains attractive and exudes class in an understated way. Likewise, the phone feels secure and comfortable in the hand and all the buttons fall easily within reach for one-handed use, though of course typing is generally a two-handed affair.


Aside from its tweaked design, the other most notable change with the 9700 compared to the 9000 is its use of the new optical trackpad that replaces the old trackball, or Pearl as RIM liked to call it. Reaction to this new trackpad has been mixed and we can see why. While it is responsive and is just as speedy to use for large movements, finer adjustments, like moving the cursor one character in a text document, can be tricky. With a bit of practice you get the hang of it – laying your thumb flat, rather than using the tip, improves tracking – but some people might find the change a bit frustrating to start with. Nonetheless, the fact that it won’t get gunked up and become unusable (as many people find with the trackball) should alleviate these issues in the long run. 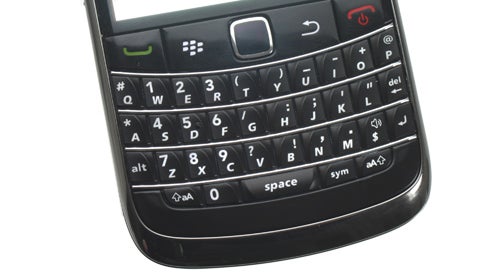 Aside from this, the front layout is the tried and trusted BlackBerry layout with a wide aspect screen up top, call answer, menu, back and call end/power buttons across the middle, and a QWERTY keyboard below. All the keys are backlit, have a reassuring positive click and respond quickly thanks to a nice shallow action.

The keyboard also has keys that are sculpted in opposite directions so as to ‘catch’ your thumbs as you type and give you a good purchase. This really helps get you up to speed when typing, though we still find that it’s not enough to allow for true touch typing (one still has to look at the keyboard). Nonetheless, this is among the best keyboards we’ve used. 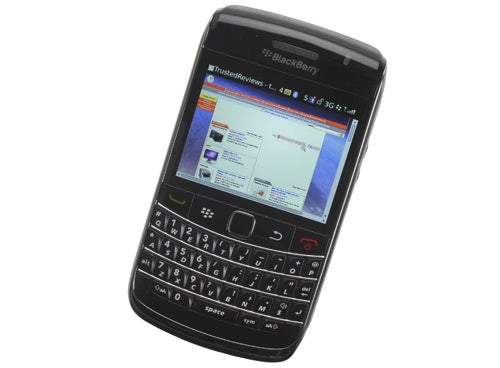 Arguably even better is the screen. Though it’s a tad small compared to full touchscreen models and is 0.1in smaller than its predecessor, at 2.4in it is still just about large enough to make viewing videos manageable and is ample for smartphone duties, thanks to its impressive resolution. RIM has managed to fit in an impressive 480 x 360 pixels – more than many premium touchscreen phones like the iPhone – making for a super sharp and detailed display, though you’ll need good eyesight to fully appreciate it as the dot pitch is incredibly fine. 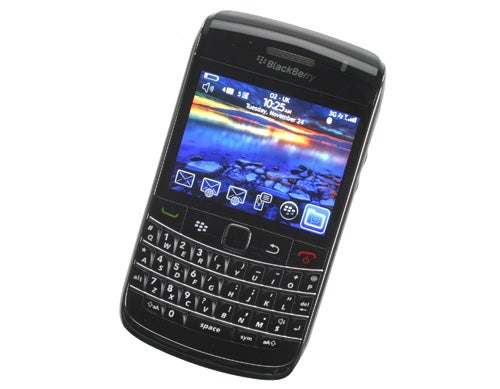 It’s not just detail that’s on offer either, colours are incredibly full and natural, and black levels are class-leading. These two combined are what really bring videos and pictures to life and actually make this an equal to much larger devices in this regard. The only downside are the viewing angles. From below, it is absolutely fine but from the sides or above, visibility drops off markedly. In general use this is no problem, but if you’re showing a group of people your latest pictorial masterpiece, they may all struggle to see what’s going on.


Actually, there is one other potential downside. Seemingly a result of the phone’s reduction in width, the screen now comes very close to the edge of the chassis, so if you squeeze the phone it can temporarily distort the display, just like if you poke an LCD monitor. This isn’t a concern in and of itself but were the phone to drop on its edge, it could be particularly susceptible to getting a damaged screen.

Incorporated into the top edge are lock and (call) mute buttons while down the right edge are volume controls and the camera button. The camera is mounted on the back and can shoot at up to 3.2-megapixels. It has autofocus and a reasonably powerful LED flash, takes photos reasonably quickly and results in pretty decent pictures with impressive colour reproduction. Video can also be shot at up to 480 x 360 pixels and the framerate is enough to make perfectly usable clips. A contender for phone camera of the year it certainly isn’t but it definitely holds its own against it peers.

Sadly, the left edge is where the 3.5mm headphone socket resides so unless your headphones have an angled plug, they’ll annoyingly stick out. At least the sound from it is very good. Also on the left is the micro-USB data and charging socket, and the Voice Command button. Irritatingly, the latter was far too easy to trigger by accident. Under the battery cover is a 1,500mAh battery and above this is a microSD slot that can take cards up to 32GB. A 2GB card comes in the box.

The software is typical BlackBerry so you get a clean and simple home screen with plenty of notifications along the top and a profile selector in the top left corner. You can choose to have either a row of six shortcuts along the bottom or have the screen filled with today’s message, phone and calendar events. 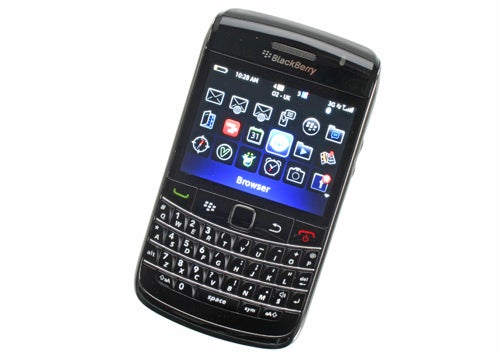 The main menu is a simple grid of icons that you can reorder as you please and further option screens are generally just black and white lists. It’s a very simple system but it works near flawlessly as it’s consistent, fast and intuitive. 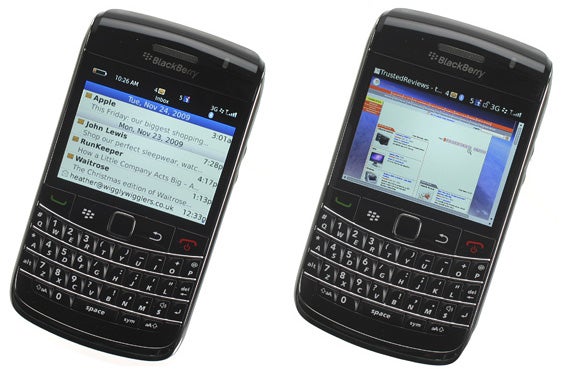 Email is of course well catered for and conveniently you can send SMS, MMS, PIN, and messages from other apps, like Facebook, through the same message interface. This isn’t complete contact integration like you get on the Motorola Dext, or INQ Mini 3G, though, so you can’t view all types of messages from one contact through a single interface. The web browser is also excellent, though the lack of support for tabs makes viewing multiple pages at once an impossibility.

The core internals of the Bold 9700 haven’t changed that much from the Bold 9000 so it still uses a 624MHz Intel PXA270 processor and that battery is also the same size as its predecessor. Despite this, RIM claims to have significantly extended battery life with talk time up from 4.5hrs to 6hrs, and standby time rising from 13.5 days to 21 days. In our tests, the battery had only dropped to 50 per cent after 2hrs playing mp3s, 2hrs playing video at full brightness, and 1hr browsing the web, which is mightily impressive. By contrast the Motorola Dext had dropped to 14 per cent after the same trials. 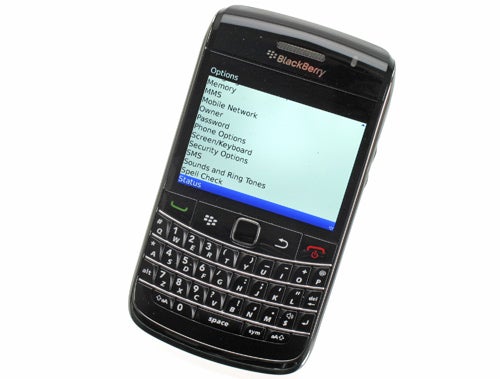 In terms of connectivity, the 9700 has everything covered with Wi-Fi, Bluetooth, HSDPA, and GPS on offer. It’s also a quad-band phone so should work pretty much anywhere throughout the world. 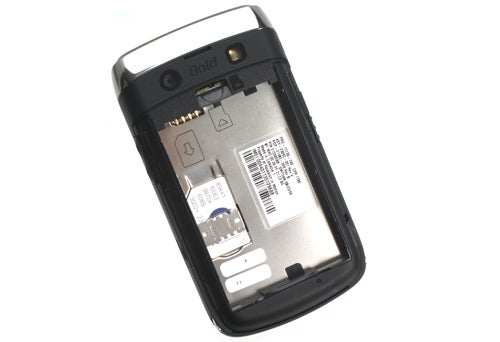 Having recently visited RIM’s research lab in Bochum, Germany, I witnessed the rigorous call quality and signal testing that BlackBerry devices undergo and the fruits of this labour are clearly implemented in this latest model. Call quality is excellent, with plenty of volume available from the earpiece, and clear noise-free audio from the microphone. The speaker, which is cleverly positioned so that putting the phone down on a table doesn’t muffle it, is also exceptionally loud and clear. 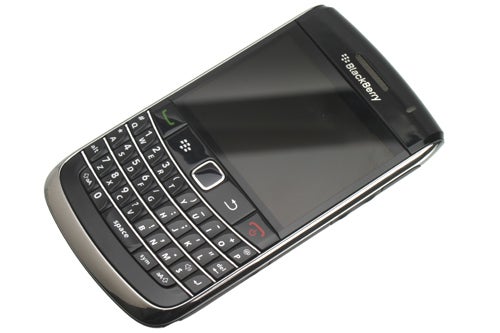 So, the new Bold is a pretty impressive device that we’d have no hesitation recommending to those looking for a smartphone with a QWERTY keyboard. In fact, given that the screen is so good, it could easily be considered an alternative to large touchscreen phones as well. On contract, it is quite expensive but with SIM-free prices starting at £380 there should be some good deals to be had through other channels.


The Blackberry Bold 9700 may not have quite the distinctive style of the Bold 9000 but in every other sense it’s a worthy successor. It’s well made, feels nice in the hand, has a great screen and keyboard, and the new optical trackpad is at least equal to the outgoing trackball. So, if you can get it for the right price, we wholeheartedly recommend you go for it. 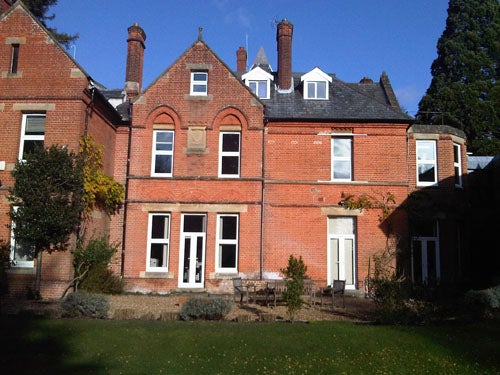 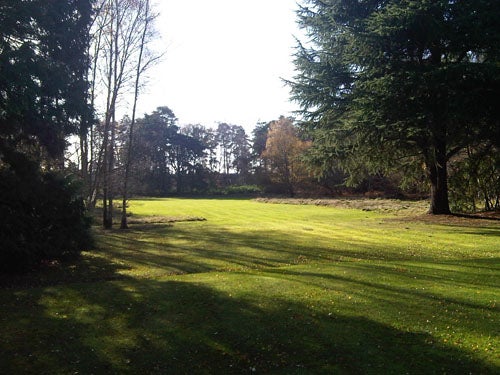 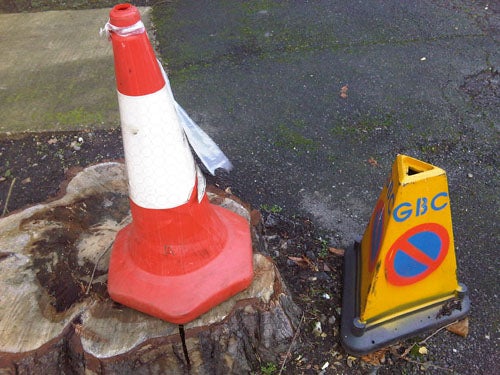 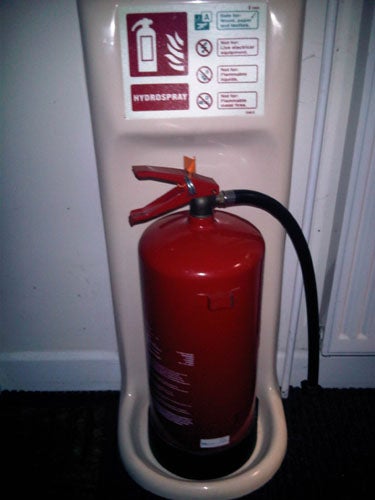 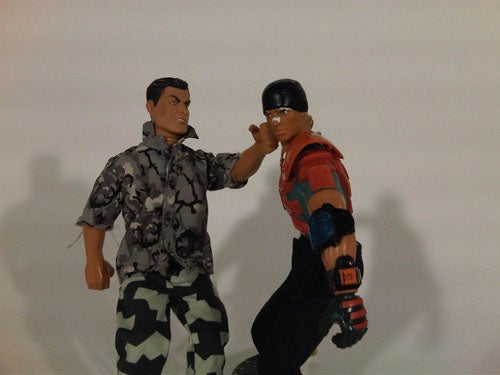