Let’s get this out of the way: Black & White 2 is a disappointment.


Call it the Lionhead effect: the way previews, presentations and developer interviews promise the Earth, then the final game arrives and things don’t work out quite as everyone hoped. Admittedly, since Fable, the Lionhead hype machine has quietened down, but Black & White 2 still promised the perfect combination of creature-raising god game and RTS. After all, wasn’t that why they hired Blizzard-veteran Ron Millar? 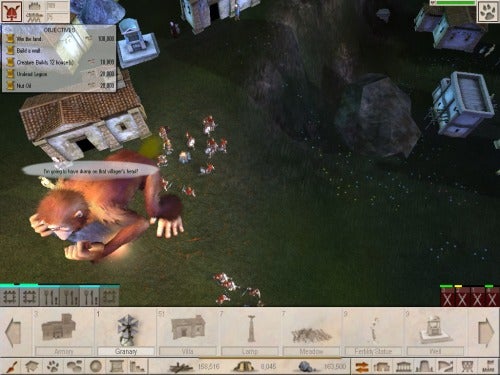 Sorry, but if you’re after a next-generation RTS, this isn’t it. Nor is it as visionary a game as the original. Clearly, a decision was made to make the Black & White sequel less frustrating and more accessible. As a result, it’s actually a lot more conventional: a game that for much of the time plays like a fantasy spin on the ancient city-building sim. The RTS elements are surprisingly basic, the creature-training has arguably been watered down, and a little of the magic has been lost. It’s no wonder that Black & White 2 has had such a kicking in the specialist games press.


You see, this time the focus is very much on winning lands. You pop up with a scattering of people, there’s another god, and it’s your job to resolve the conflict. In tune with the game’s moral focus, there are two core ways of doing this. The good way, as pushed by your friendly angelic advisor, is to build a culture so magnificent that your rival deity’s followers will up sticks and join you. Add temples, lamps, universities, nurseries, graveyards, and other public amenities, and they’ll start looking on your people with envy. 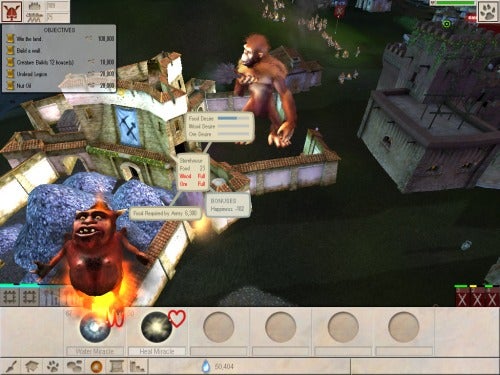 The evil way, as promoted by the foul-looking fiend sitting on your other shoulder, is to raise enormous armies and crush your enemies. In true Black & White fashion, the path you take affects the landscape: it’s either sweet summer flowers or magma everywhere you look. And if you really want to push things either way, there are buildings you can add that directly affect your city’s balance. After all, most evil deities aren’t too fussed about providing retirement homes, while just rulers don’t often hold with torture pits.

The game’s other big moral barometer is your creature. As with Black & White, you can choose from a selection of animal archetypes, but what you end up with as your creature grows from childhood, through adolescence to his adult form, is up to you. Spoil and pamper him, and you end up with a useless lump. Encourage good behaviour and reward his efforts to aid your people, and you’ll soon have everyone’s best friend. Slap him about and send him off on killing sprees and – congratulations – your bonny boy is a blood-drinking psycho. 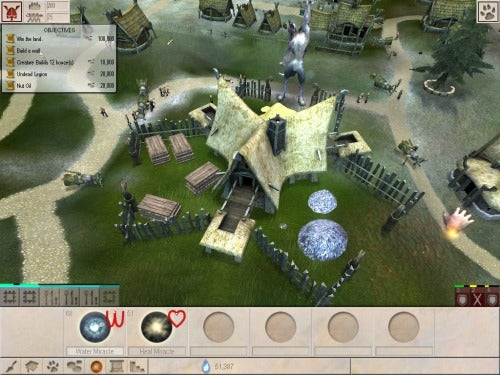 Now, Lionhead obviously reckoned that creature-raising was a bit too tricky in Black & White, so the sequel has a lot of tools to make it as easy as humanly possible. As well as pulling the creature towards points of importance with a leash, and tickling or slapping to reward and punish, you now get a menu of ideas which you can select and reinforce. In other words, your creature now learns by spoken instruction, not just real example. What’s more, his powers can be upgraded in pretty much the same way. It does make it easier to produce a creature that helps build and defend your city, but it also takes some of the old ‘joy of parenting’ out of the game. It’s a little less like raising a child, and a little more like managing an assistant. 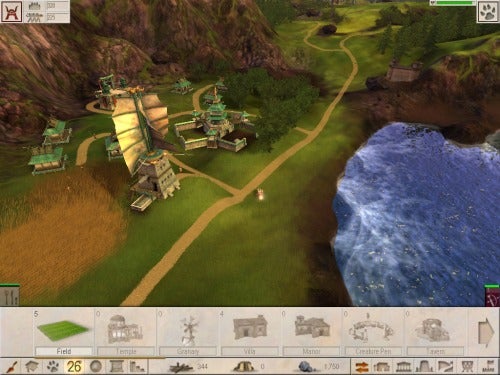 This isn’t the game’s only failing. As I mentioned, the RTS gameplay is fairly basic, with only a few units to play with, and not much in the way of actual strategy beyond go here, defend that, attack them, capture that. It also takes an awful lot of resources – including valuable human ones – to raise a respectable army. As a result, whichever approach you take, the levels can take an awfully long time to play through, and it’s all too easy to find yourself in a stalemate for hours. What’s worse, the AI seems flawed. Your opponent tends to send in small wave after small wave of troops, which are easily mopped up by any defensive forces and your creature; provided a) your defensive forces actually recognise and respond to the threat and b) your creature can be persuaded to help.

Sadly, neither can be taken for granted. Realistic? Maybe. Annoying? Definitely. And why does it steadily turn your creature evil to defend your city? Maybe it’s a moral point, along the lines of Nietzche’s old stuff about looking into the abyss, but if it is it’s really annoying.


Finally, the godlike tasks are still slightly crap. Maybe it’s just my bungling, but the little miracles you’re asked to perform – tossing barrels, splitting stones – are either so painfully easy that you needn’t have bothered, or so hard to manage with the slightly cludgy hand controls that you wish you hadn’t. After a while, it’s tempting to just ignore them. 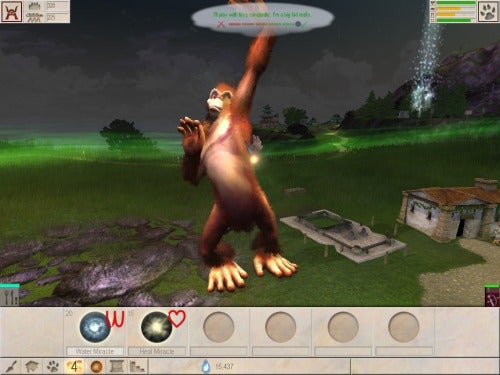 Now, given all this the high score seen above is going to sound a little strange. After all, these are some pretty deep flaws for such a high-profile game.


Well, I’m almost ashamed to admit it, but it’s partly becauseI can’t resist the graphics. Black & White 2 is easily the most beautiful strategy game I’ve ever seen. The landscapes are awesome, the towns and cities vibrant and full of incidental detail, the armies stunning when seen en masse, and your creature is so primed with expression and personality that you cannot help but be amazed. In the early stages, you can spend large amounts of time just scrolling around the world, admiring the rolling hills, the breaking waves, the swaying grass. Once you hit later levels and the larger confrontations and impressive, special weapon miracles start coming in, the game reaches an incredibly cinematic level. 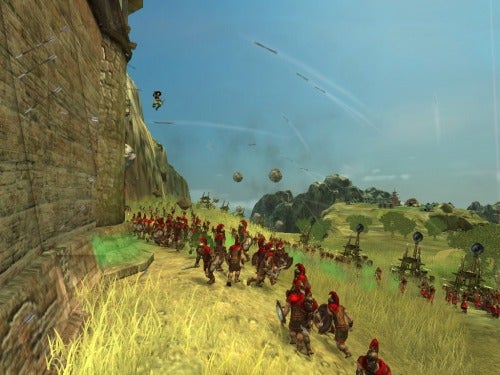 Secondly, it’s still down to the creature. You might not have the special relationship you once enjoyed, but it’s still a blast to see him fetching, carrying and building; a wheeze to see him picking up a villager with real interest and delight; a chortle to watch as he squeezes something nasty out beside an appalled crowd. There’s even a fierce pride as he barrels, kicking and roaring, into an enemy platoon. It’s an amazing achievement, and one that, in many respects, is now better integrated into the actual gameplay. No longer a distracting side-issue, the creature now feels central to the action.

Most of all, I just love the way the game delivers a feeling of close interaction between you, as a god, and your world. So much of this is down to the interface. Yes, there are more menus this time around, and anyone with any sense will soon start using keyboard shortcuts to control movement, but the way in which you can perform most operations just by clicking and dragging is fantastic. I like the way you can just grab your people’s most requested building from a central plinth and lay its foundations on the ground nearby. I adore the way the game gives you information at a glance, lets you copy buildings from nearby buildings, or drag out a regiment to build by grabbing and dragging a flag. It’s brilliant. It works. Even non-gamers can and will understand it. In all the carping about the basic nature of the RTS gameplay, a lot of commentators miss this out. 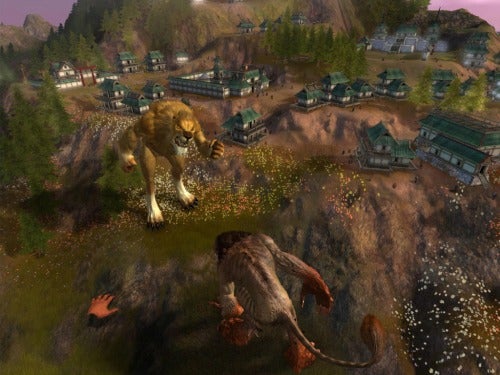 And in the final analysis, what counts is that I thoroughly enjoy playing Black & White 2. Granted, it’s not without more than its fair share of frustrations, but it still provides worlds in which I can lose myself and challenges I want to get to grips with. It might not deliver all that was promised, but in the long run I really don’t care. As disappointments go, it’s hardly the worst I’ve come across. 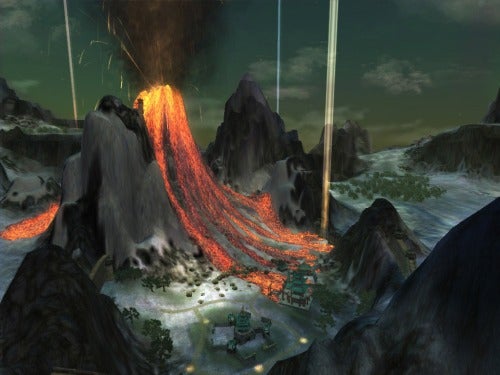 
I’ve spent hours with my Black & White 2 creature, and while he has some deep-rooted problems and does some fairly awful things, I can’t help but love him all the same. That goes double for the game itself.