It might not be the biggest name in motherboards, but we’ve been impressed with Biostar’s efforts in the past, such as the Biostar TPower X58A. Now we’re looking at the T Series TA870+, an ATX board based on the AMD 870 Northbridge and SB850 Southbridge combo.


Not to be confused with AMD’s new 890GX IGP, which combines the same SB850 Southbridge with an 890GX Northbridge (as used in the recently-reviewed Asus M4A89GTD Pro/USB3 and Biostar’s own TA890GXE), the TA870+ doesn’t offer integrated graphics, which is probably preferable for an enthusiast-class motherboard anyway. USB 3.0 support is also lacking though, which helps keep the price down but is a regrettable absentee. 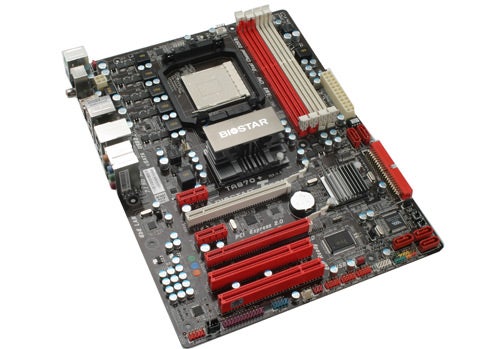 However, considering USB 3.0 is easily added through an expansion card, more basic models like the TA870+ can still be an attractive option – especially since this Biostar board offers a very decent feature set. Features of note include CPU Core Unlocking, CrossFire support (x8/x8), USB BIOS updating, software overclocking and SATA 6Gb/s (also known as SATA3, which though technically inaccurate is what Biostar calls it). The motherboard can also provide up to 140W to the CPU, meaning it supports hexacore Phenom II X6s such as the Phenom II X6 1090T found in the DinoPC 6th Sense. It comes with a five-phase power system and indicates how many phases are in use at any one time with red LEDs, a nice if somewhat superfluous touch.


On the other hand the included bundle is rather sparse, with the obligatory driver CD and manual, a four-pin to SATA power adapter cable, a blue Velcro cable strap and three yellow SATA data cables which don’t match the board. 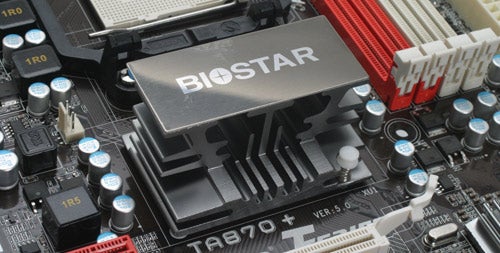 Onto the motherboard itself, the first thing those familiar with Biostar’s motherboards will notice is that the company has revised its design philosophy significantly. Gone are the garish hotchpotch combinations of neon colours used in its previous boards, such as the TA790GX A3+. Instead we’re greeted with a sharp combination of red, white, black and gunmetal grey that’s eerily similar to that used by the Asus ROG or indeed EVGA’s Classified high-end boards.


This is most definitely a good thing, and at a single stroke Biostar’s visual appeal has gone from Fisher-Price to enthusiast hardware. The only visually-obvious absence is of any cooling for the mosfets around the CPU socket; only the North- and South-bridge are given heatsinks, but at least they’re just as attractive as the rest of the board.

The TA870+’s layout is okay if hardly special. Primary memory slots are set side-by-side where we prefer a staggered approach, but that’s common enough. Supported memory speeds range up to 1,800MHz, again common though many competitors manage more. None of the TA870+’s five SATA 6GB/s ports (courtesy of the SB850 Southbridge) are angled either. Two are located just above the angled EIDE connector, with a further three at the bottom of the board. This ensures that none of them will be blocked even if you opt for a dual graphics card setup.


Between the bottom SATA ports and the EIDE connector we find unobtrusive power and reset buttons, which is always a nice touch on an enthusiast board. However, the usefulness of these buttons is limited somewhat by being identical with only tiny letters on the board to distinguish between them, so it takes careful examination to see which one to press. 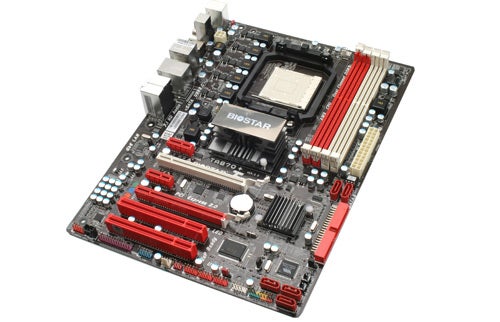 Probably more useful is the clear-CMOS header located next to them. There are also three fan headers sprinkled around the board, and along the bottom of the TA870+ we have headers for USB, FireWire, additional digital audio out, IR (a welcome and relatively rare addition used to hook up an infrared receiver), and Printer plus Serial headers for those requiring legacy connections.


For expansion cards we have two PCIe x1 slots (one of which will be blocked if installing a dual-slot graphics card), two 16x graphics ones and two good old PCI slots. Unfortunately, despite its CrossFireX compatibility claims, the TA870+

is yet another of those boards that don’t offer full speed on both graphics slots. In fact, it doesn’t even offer half-speed, with the second slot running at just 4x, which is simply not up to getting the full potential out of a high-end dual card setup. 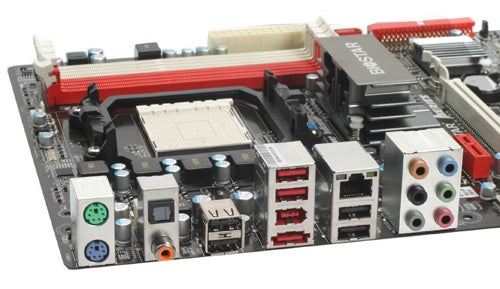 Rear IO connectivity is pretty much what you would expect. Mouse and keyboard PS2 ports are joined by six USB 2.0 ports, FireWire and eSATA and a Gigabit Ethernet port. Audio outputs for the motherboard’s integrated 7.1 Realtek ALC892 chip are provided by co-axial and optical digital outputs and six 3.5mm analogue jacks.


Before getting onto the software and BIOS, it’s worth noting that the TA870+ is not quite a full-size ATX motherboard. While it has the standard ATX height (305mm), it is slightly narrower than most boards with a width of only 220mm (compared to the standard 240mm). This leaves you more room to move it about in your case, but does provide less support as it misses a row of stand-offs. A little more care than usual when pushing in the 24-pin power connector might thus be advisable.

Biostar offers a clean and logical BIOS on the TA870+, which while lacking a few of the more obscure additions of some competitors offers everything you’re likely to need. Aside from the usual options, including a dedicated PCIPnP menu, the two places of interest for enthusiasts are Advanced and T-Series. Under Advanced you’ll find non-overclocking CPU settings; the Smart Fan Configurator, which deserves praise for its flexibility; and Hardware Health, which allows you to monitor temperatures and voltages.


Unsurprisingly, the T-Series menu contains features reserved for Biostar’s relatively high-end T-series boards. Perhaps the most desirable of these is BIO-unlocKING (yes, cheesiest use of capitals ever), the equivalent to Asus’ Core Unlocking. If you’re lucky in your processor choice, this will re-enable one of the ‘binned’ cores on some AMD CPUs, potentially turning a dual core chip into a tri-core, or a tri-core into a quad, etc..

Unlike the Asus M4A89GTD Pro/USB3, the TA870+’s BIO-unlocKING didn’t activate the fourth core on our Phenom II X3 720 – but then this core wasn’t functional after being activated on the Asus anyway, so perhaps Biostar’s system is just less optimistic than its competitor’s. However, what was very odd was that BIO-unlocKING asked us to unlock the third core (before attempting to unlock the fourth), which was obviously already unlocked on the tri-core Phenom II X3. Just keep in mind that core unlocking is always going to be a bit of a lottery.


The other T-Series menu functionality consists of overclocking using the Overclock Navigator. This allows for three automatic OC settings, called V6-, V8- and V12-Tech Engine. Impressively, V12 performed nearly on par with Asus’ CPU Level on the M4A89GTD Pro/USB3, bringing our Phenom X4 810 up from its stock 2,600MHz to 3,120MHz (V6 overclocked to a more modest 2,860MHz). Unfortunately, the TA870+ wasn’t completely stable at these settings, though it remained rock solid at V8’s 2,990MHz. 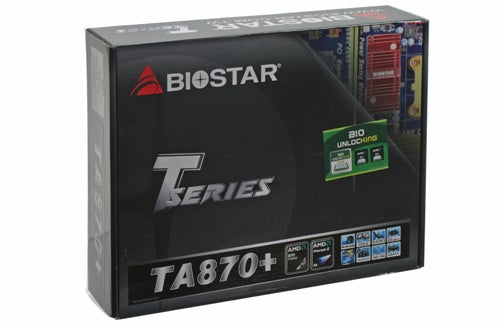 One unusual feature is that the freeware Memtest86+ (which scans your memory for faults or corruptions) comes integrated into the Biostar’s BIOS, and you can configure it to run when your PC starts. Obviously you can just download it from the net for free but it’s handy to have it accessible at this level (i.e. without requiring a hard drive or internet connection), especially when using the board in a fresh build.


The BIOS’ only real disadvantage, and then only for some, is that it doesn’t support multiple profiles. There is a configuration backup option, though, so you can save a single set of tweaked stable settings in addition to the default and active profiles to give you a bit of leeway.

Unsurprisingly, Biostar’s installation disc isn’t quite as sophisticated as some rivals’ efforts: for example, there’s no single button to install all the apps or drivers, and they’re not as visually appealing as we’re used to. The two utilities likely to see most use are Toverclocker, Biostar’s Windows overclocking utility, and Green Power Utility II, which provides various instant performance/power profiles. 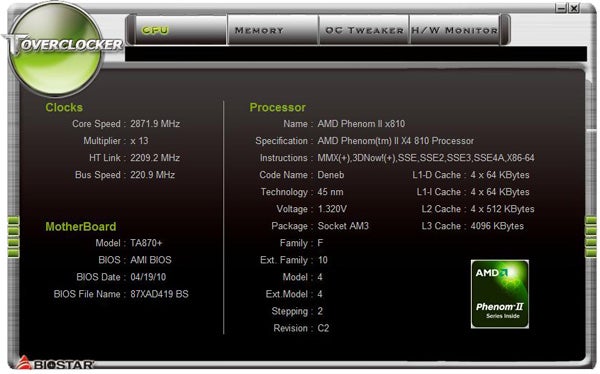 Unfortunately, Toverclocker didn’t manage to get the CPU even close to what the Overclock Navigator provided, so – as is often the case – you’re better off using the BIOS. The software’s testing function didn’t help much either, as overclocked settings would successfully pass the test only to crash the PC within seconds once actually applied.


Overall then, we have a motherboard that’s pretty much average for its price of around £70 (with this likely to go down as availability increases). Above and beyond many boards in this price range the TA870+ does offer the advantage of SATA 6Gb/s, but as we discovered in our review of the P7P55D-E Premium the benefits of this are minimal at best (at least when using mechanical drives) and with a bit of searching you can even find motherboards offering USB 3.0 (a far more useful addition) for under £75. 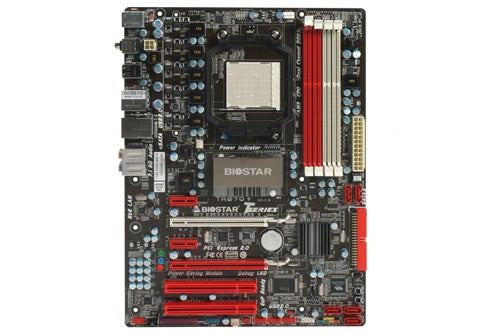 The TA870+ is certainly a good-looking board (we can only hope Biostar keeps this new colour scheme up) and its red & black livery will go well with the latest Radeon video cards, but its enthusiast potential is somewhat limited by its lack of proper CrossFire and merely decent overclocking performance. It’s also worth keeping in mind the board’s slightly smaller-than-standard size, which adds a little flexibility (especially for modded cases), but for that you’re probably better off with a micro-ATX board like the Asus M4A785TD-M to begin with.


Biostar’s TA870+ is an attractive and decently-performing motherboard that offers SATA 6Gb/s at an affordable price point. However, there are boards available providing various combinations of better overclocking performance, proper CrossFire support, more refined software and even USB 3.0, so think carefully before betting on the TA870+.

Addendum: There was some confusion as to the CrossFire capabilities of this motherboard, and unfortunately it turns out the second slot will only run at 4x maximum. The review has been amended to reflect this.