The problem with having a PC in the home is that it looks ugly and spoils whichever room you happen to put it in. Well that has traditionally been the opinion of the PC as a consumer product, and it’s something that Apple has capitalised on with its range of iMacs. Apple’s jibes at the PC being a boring beige box may have annoyed PC owners, but few of them could justifiably contest the remarks. But that image is changing now, and very few PCs are beige or boring anymore.


The size of a PC can still make it an eyesore to some consumers though, even if it’s built in a stylish aluminium case like the CoolerMaster WaveMaster that I reviewed a few months back. Even from a pragmatic point of view, I sometimes find myself questioning my decision to build my current PC in a tower case. With almost every thing I need integrated on the motherboard, the only expansion card I have in my PC is the graphics card. Add to this the fact that massive hard disks are so cheap now that you don’t need to have more than one (RAID arrays aside), and with DVD writers covering just about every optical disc duty, a single 5.25in bay is more than adequate for most users.


So, it was with all this in mind that I decided to build my wife’s new PC in a small form factor chassis. I am in no doubt that SFF PCs are going to be huge over the coming months and years. Gone are the days when you had to sacrifice power and features to have a small PC. Now you can have a small cube system that’s every bit as powerful as large desktop system. And it’s not just the size that matters, SFF PCs are becoming more stylish by the day, which goes a long way to tempt the décor conscious home user.


Although it was Shuttle that really pioneered the small form factor PC, it seems that almost every hardware manufacturer out there has an SFF system on offer. Having recently spent a few days wandering around CeBIT, I can testify to this fact. After much deliberation I decided to build my wife’s new PC in a Biostar iDEQ 200N.


Having already reviewed a P4 version of the iDEQ and an Athlon 64 variant, I thought I would go for the Athlon XP flavour of cube. With the Athlon 64 gaining momentum, Athlon XP chips can be picked up at bargain basement prices. I also managed to get hold of a 2500+ CPU that would happily clock to 3000+. Unfortunately, the clock multiplier in the iDEQ didn’t go high enough to push the chip into 3000+ territory, but it did tick over nicely as a 2800+.


The iDEQ 200N is a great looking box, finished in a kind of translucent silver. It also comes in black, but I have to say that I prefer the silver. The front fascia has a sliding panel that hides a single 5.25in bay and a 3.5in bay. As already mentioned, you’re unlikely to need more than one optical drive these days, and the 3.5in bay can be used for a floppy if you feel you need one, although I think that most users will put a memory card reader in there. Below the sliding panel is a large silver power button and a smaller silver reset button that’s flanked by power and HDD indicator lights.


At the bottom of the front fascia is a full array of ports, and since the iDEQ comes with its motherboard pre-fitted, you don’t have to worry about having to connect them all up. Here you’ll find two USB 2.0 ports, a six-pin FireWire port, an optical S/PDIF and headphone and mic sockets.


The array of connections at the rear of the iDEQ is no less impressive with two more USB 2.0 ports, another six-pin FireWire port, PS/2 ports for keyboard and mouse, a connector for the 10/100 Ethernet adapter and another optical S/PDIF. You’ll also find mic, headphone and line out sockets, which also double up as 5.1-channel outputs. Finally, there are D-SUB outputs in case you want to utilise the integrated graphics.

Entry to the internals is via the two side panels and the top panel. All of these panels can be removed separately, and all of them are secured with thumb screws, so there’s no need for any tools. You can literally gain access to the innards of the PC in a few seconds.


Now, as sleek and stylish as the iDEQ looks on the outside, it’s the inside that’s truly impressive. What sets this little cube apart from so many of its competitors is the attention to detail that’s gone into the construction. Basically, Biostar has done just about everything possible to make system construction as simple as it can be.


When you’re working inside a small chassis, cable routing can be the difference between an easy and a nightmare building experience. Thankfully Biostar has routed all the cables for you, so when you come to install your optical drive, the IDE cable and power cable will not only be exactly where you want them, but also clearly labelled. The floppy drive connector is right at the back of the 3.5in external bay, while the IDE and power cables for the hard disk are also right next to the cage. Talking of the hard disk cage, this is removable for easy disk installation. And, like the side panels, it’s fixed with a single thumb screw for easy access.


Unfortunately I couldn’t make use of the IDE routing for the hard disk, since chose to use an S-ATA drive (yes the iDEQ supports S-ATA drives too). There is of course, an S-ATA cable supplied and I found it easy to route it discretely around the front of the chassis, keeping it out of the way of everything.


Inserting the CPU is easy enough, and Biostar provides a copper CPU protector to stop you accidentally crushing the die when you clamp down the heatsink. Talking of the heatsink, this is custom item complete with a heatpipe to handle heat dissipation as efficiently as possible. It’s also very easy to attach the heatsink/fan assembly, although it’s a bit of a tight squeeze getting it past a row of capacitors. Also, the fan blows the hot air from the CPU directly out of the rear of the case, again keeping ambient temperature as low as possible.


If you don’t want to use the onboard graphics there is an AGP slot, which I chose to fill with a Radeon 9800Pro card. With a decent 3D graphics card installed you really can build a small form factor machine that can handle anything you care to throw at it. Surprisingly, even with an overclocked CPU and a fast graphics card, heat isn’t a problem inside the small iDEQ chassis. There’s also a single PCI slot, which is most likely to house a modem – pretty much the only thing that’s not integrated into the motherboard chipset. Of course if you have broadband you won’t need a modem and I found myself leaving the PCI slot empty. I filled the two memory slots with matched modules for a dual channel configuration. If you’re going to do this it’s worth buying as much memory as you can afford since there will be no expansion options later without discarding your old modules.


If there’s one thing that I did find a little annoying, it’s the lack of a parallel port. I still have an old laser printer that I use at home which has a parallel interface and I couldn’t connect it up to the iDEQ. Of course I am nit picking a little bit here, and realistically I should just get myself a parallel to USB converter cable.


Performance wise, the iDEQ should be comparable with any other system based on an nForce2 motherboard. We will be looking at the Athlon XP version of the AOpen XC Cube soon, so there will be a direct comparison there. It’s safe to say though, that you won’t be disappointed with the performance of the iDEQ.


There will be no shortage of small form factor PC chassis to choose from over the coming months, but for me, the iDEQ from Biostar is currently the best in terms of design and ease of build.


If you want to build a small and stylish PC the iDEQ will make an excellent base platform. With superb design, great layout and lots of features, the iDEQ has everything you need. And with the current price of Athlon XP processors, you can build a cube-based performance PC at a bargain price.

The Biostar iDEQ was tested using an Athlon 2500+ (clocked to 2800+), a Samsung S-ATA hard disk and two matched 256MB Crucial TwinX LL PC3200 memory modules. Both the onboard graphics and an ATI Radeon 9800Pro card were used for selected tests. 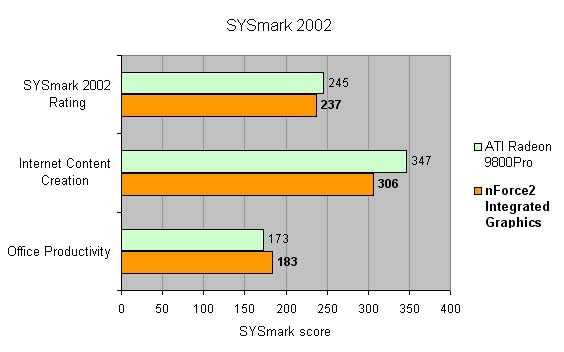 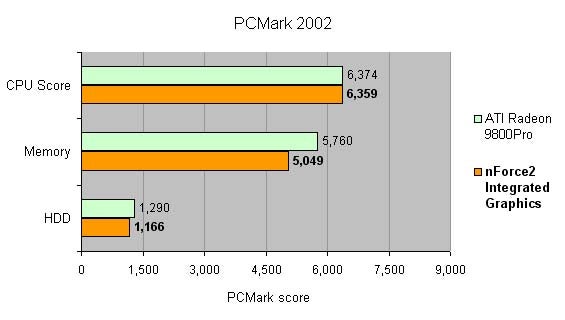