I might as well just come out and say it: the sequel isn’t as good. But how could it be? BioShock excelled because it took us somewhere we had never been, delivering some of us one of the most richly atmospheric, emotional experiences we’ve ever had from a video game. It was only logical that BioShock 2 would return to the undersea city of Rapture; to its magnificent, rusted art-deco style and the lunatic antics of its vicious, gene-splicing population, but it’s left its new developers with an uphill struggle. How do you shock, horrify and amaze an audience with something that has already shocked, horrified and amazed them before? Worse, how do you add to a storyline which the first game pretty much completed? With Ryan and Fontaine dead and Rapture at the point of total collapse, what exactly has the city left to offer us to justify a second visit? 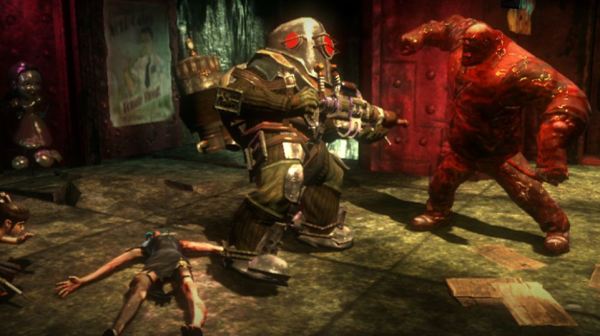 The answer is: a new story, a new nemesis, some intelligent new game mechanics and an experience that – in the end – still manages to affect you in a way that few other games can manage. The only thing you need to understand is that not all of this will be apparent within the first few hours. To get the most from BioShock 2 you’ll need to have a little faith.


Let’s start with what’s changed. As you probably know, BioShock 2 puts you in the hefty steel boots of one of the very first Big Daddies. Some ten years before the fall of Rapture you’re, apparently, slain with your Little Sister charge taken away from you. Now, with Ryan killed and Rapture society in the midst of a final breakdown, you awaken once more. Armed with a huge drill and whatever weapons and plasmids you can carry, it’s up to you to find your Little Sister once again and ensure that no harm befalls her. 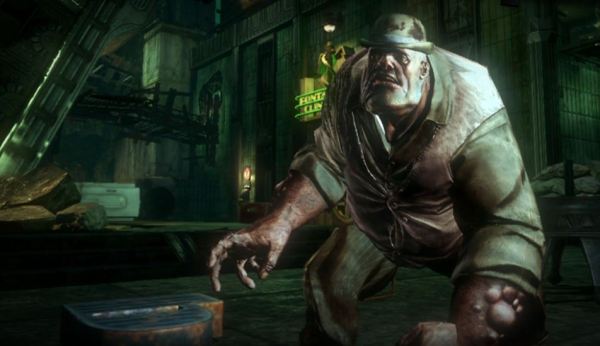 Without wanting to say much more about the plot, this puts you directly in the way of the schemes of a certain Dr. Sofia Lamb, who, with her collectivist ideals and pseudo-religious iconography, wants to create a new utopia in the wake of Ryan’s failure. As if your regular splicers aren’t enough, you now have to contend with Lamb’s Rapture cult, the Family, plus new enemies in the shape of the gorilla-sized Brute splicers and BioShock 2’s signature enemy, the Big Sisters.


Up to a point, BioShock 2 is business as usual. You quickly get Big Daddy-sized variants of the machine-gun and shotgun to play with, along with a new, more versatile version of the Rivet Gun. You make your way through previously unseen areas of Rapture – a luxury spa resort, an amusements centre, a poor men’s slum, a red-light district – following the instructions of a new ally, Augustus Sinclair, and battling those standing in your way.

As before, you won’t get far without Plasmids; genetic alterations that give you the power to fling fireballs, freeze enemies with ice, move and throw heavy objects with the power of your mind, or hypnotise foes so they’ll take your side in battle. By combining plasmids with conventional firepower, you can take on anything Rapture can throw at you, but if you do fall, don’t panic. Within seconds you’ll reappear at the neatest Vita-Chamber (though hardcore FPS players should note that you can switch this off if you fancy a challenge). 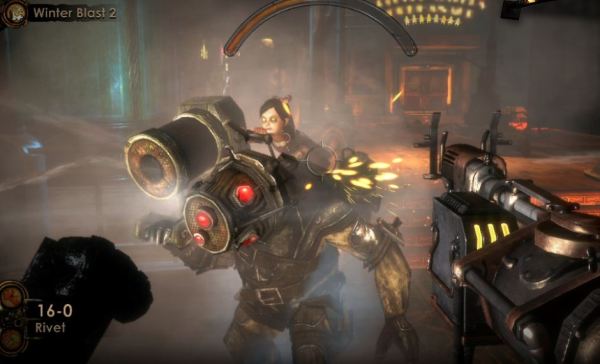 In a range of ways, however, things have changed quite dramatically. The ability to dual-wield plasmids and guns is just the start. The splicers now behave more intelligently, working together more in groups to bring you down. You can still hack turrets and security cameras, but hacking has been changed from a sliding-block puzzle mini-game to a simple stop the needle on the guage affair which doesn’t keep you in the game world (and potentially in danger) all the time. The drill, meanwhile, is a significant melee weapon, chopping through splicers in horrifying fashion and still providing service when it runs out of fuel with a hefty swing that soon batters back all but the toughest Brutes and Big Daddies.


Most importantly, BioShock recognises your Big Daddy status by changing your relationship to the Little Sisters. In the old days you needed a substance called Adam to purchase new plasmids, and the only way to get decent quantities was to take down a Big Daddy, grab his Little Sister, then either ‘rescue’ or ‘harvest’ your quarry. In BioShock 2 you now adopt the Little Sister. Instead of escorting her, you place her on your shoulder, at which point you can pretty much forget she’s there. At the press of a button, however, she’ll detect the nearest source of Adam, sending you to the loaded splicer corpse with a trail of silver mist. When you get there you drop the Little Sister off, then stand guard while she sucks out the Adam with a huge syringe. 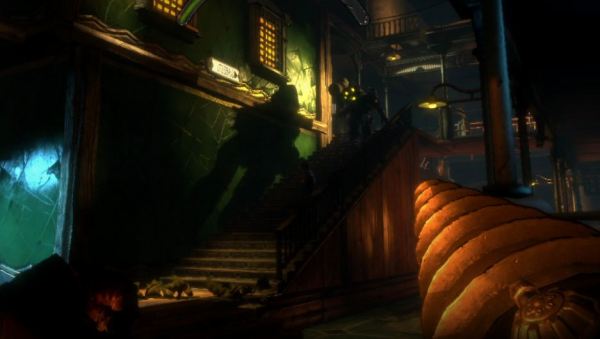 Easy? Not on your nelly. The second you put her on the floor, every splicer in the district will descend on your location, hungry for Adam and blood. The focus for you, therefore, is on making the area defensible. For a while this won’t come naturally and you’ll find yourself getting blasted into smithereens, leaving you and your Little Sister back at square one. With time, however, you remember that many weapons come with secondary ‘trap’ ammunition, and that hacked security devices, certain plasmids and the environment can be used to your advantage. Each ‘harvesting’ process effectively becomes a set-piece stand off where you do part of the setting up yourself.

It doesn’t stop there. When a Little Sister has harvested two lots of Adam it’s time to lead her to the nearest vent, at which point you can set her free or do some harvesting yourself. Whichever route you choose, you’ll incur the wrath of a Big Sister. A banshee wail screams out, the big music kicks in, and it’s up to you to scramble and find some way of stacking the odds in your favour before the gangly, suited harpy appears. 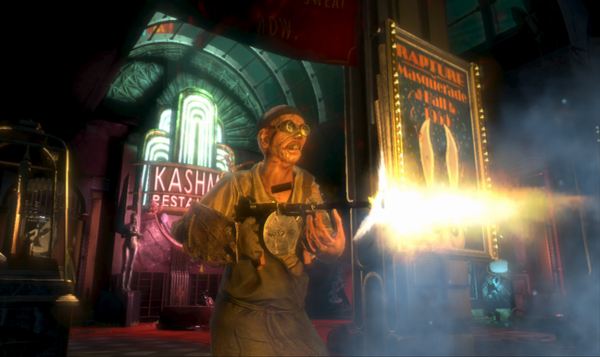 Fast-moving, brutal and heavily armed and armoured, the Big Sisters are all but unstoppable, and while you can, to some extent, rely on Vita Chambers and take them down bit by bit, you’ll have a much easier time of it if you plan ahead and use the same kind of tricks you use when defending against the splicers. Big Sisters can be stopped; you just need to use your brains to do so.


All of this is great, but it has to be said that, for the first few hours, BioShock 2 just doesn’t seem to have the magic of its predecessor. It’s hard to say why; the combat is better, the harvest/defend routine adds more variety, and the things that made the first game so atmospheric – the recorded diary entries, the excellent dialogue, the superb music, sound design and art direction – all work just as effectively as they did before.


Maybe it’s simply that you can’t help feeling that you’re playing a slightly less inspired version of BioShock, with the characters and plotline that made the first game so incredibly compelling replaced by new, lightweight substitutes. Even second-rate BioShock is great, and the range of weapons and plasmids gives it a flexibility and space to experiment that you won’t find in, say, Modern Warfare 2, but this just isn’t as spell-binding an experience. 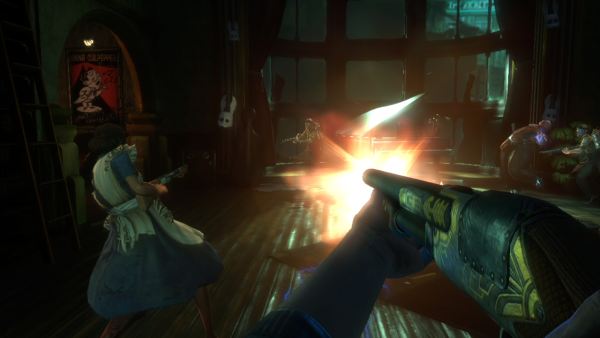 With time, however, BioShock 2 blossoms into something different. It’s not just that the Little Sister stuff opens out the otherwise linear level design, or that the levels themselves improve (which they do). It’s that the game suddenly finds its heart and establishes relationships and motivations that give you the will to push on through until the end. In these later stages the twist and turns of the plot are genuinely shocking, surprising and affecting, and I can’t remember a game since Ico where I’ve so much wanted to finish a game in one huge, breathless chunk. If the first two thirds of BioShock 2 are solid with sporadically awesome moments, the last third is pretty much magnificent. And this time, there’s a real sense that the choices you made – the moments where you took pity or revenge – mattered the whole way through. I won’t say more, you’ll have to play it.

In the end, then, BioShock 2’s single-player campaign finds a rapturous redemption. What’s more surprising is that the all-new multiplayer option doesn’t let the side down. I expected a lazy, half-assed effort, but instead we get a selection of all-against-all and team competitive modes which work hard to fit in with BioShock’s setting, atmosphere and core mechanics. This goes beyond adding plasmids to the armoury or using Little Sisters instead of flags or control points. 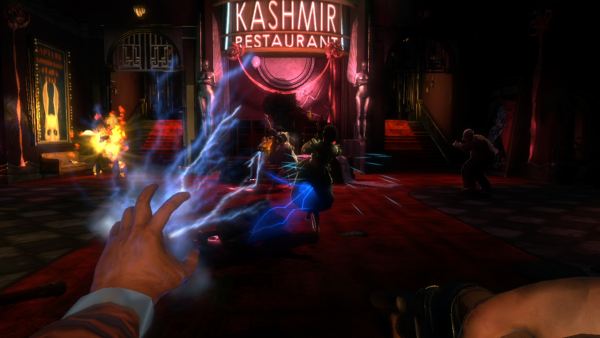 It extends to the ways in which you can use all the tools at your disposal – from hacking turrets to analysing fallen foes for a damage bonus – to get a vital edge on your rivals. It still feels like BioShock, and the decision to centre the multiplayer mode on a persistent character with an experience-based plasmid and weapon upgrade system works wonders. The more you play, the better you’ll get and the more fun you’ll have.


So, BioShock 2 isn’t as good as BioShock, but what matters is that it’s still great. Taken mechanically, stripped down point by point as an FPS it still falls victim to the gripes that so many whingers and moaners had about BioShock, but then the appeal of BioShock was never just about the gameplay: it was about the atmosphere, the emotions, the experience. The sequel improves the gameplay, and if it takes a long time to reach the same heights with the narrative, then at least it gets there in the end. Prepare for some early disappointment, but if you loved BioShock, you really don’t want to miss this. 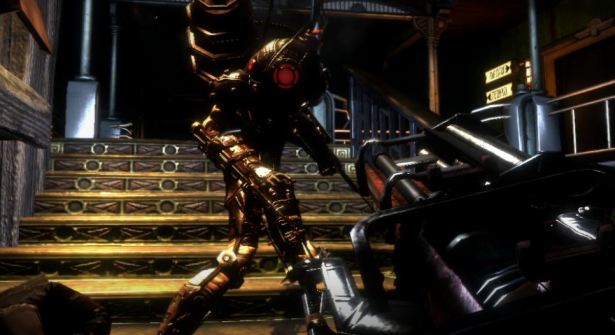 
The return to Rapture in BioShock 2 suffers slightly from ‘second time’ syndrome, but give it a few hours and an outstanding game shines through. The single-player campaign is so much more than a retread, and the multiplayer mode works better than you might expect. Rich, emotive, and ultimately very rewarding.