With a price tag of just £1,200, BenQ’s DLP-based W1200 projector would once, not so very long ago, have been an absolutely bog-standard effort in terms of features and, most likely, performance. Traditional DLP issues such as rainbow noise and ‘fizzing’ would have both been a cert, sophisticated picture adjustments would have been more or less non-existent, and fancy stuff like motion compensation processing would have been a laughably distant dream.

So competitive is the market today, though, that the W1200 has none of the bad stuff in that list and all of the good stuff – plus loads more positives besides.

In fact, almost the only thing it doesn’t do is make a great first impression. For while it looks quite nice in the photographs scattered throughout this article, in the flesh it’s a bit too small, plasticky and lightweight to really inspire confidence. 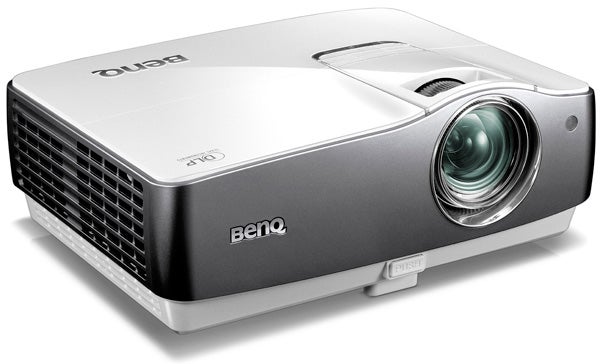 Things look up when you check out the W1200’s connections, though. Its twin HDMI provision is pretty standard for this price point, but system building-friendly jacks like an RS-232 port, IR port, USB port and even a 12V trigger output go way further than we’d expect. Also of note are a D-Sub PC input and a monitor output.

Where the W1200 really makes you sit up and take notice, though, is with its spec sheet. For this contains a startling array of features you just wouldn’t normally find on a £1200 projector.

For us the single most intriguing and promising thing about the W1200 is the inclusion in its optical system of no less than 12 separate lens elements. This has been done so the projector can reproduce full HD sources with greater sharpness and clarity, as the abundance of lenses can keep a tighter control on the image’s focus and purity during its optical ‘journey’ through the projector.

Also very unexpected – and possibly less welcome – is the W1200’s Frame Interpolation processing. As its name suggests, this is designed to calculate and interpolate new frames of image data to counter judder, especially when watching 24fps Blu-rays. But this sort of processing can – especially at the budget end of the market – leave films looking unnatural and ‘video-like’, as well as generating too many unwanted processing artefacts. At least the option is there to disable the frame interpolation if we can’t get on with it.

Another surprising touch for its money is the W1200’s claimed 85 per cent NTSC Colour Gamut versus the typical 72 per cent figure – a feat allegedly achieved thanks to a proprietary BenQ colour wheel coating.

Yet more good news for such an affordable projector comes with the discovery that it uses 10-bit colour processing, resulting, we would expect, in smoother colour blends and more natural tones than you would get with an 8-bit model.

While we’re talking numbers, it’s hard not to feel at least a bit impressed by the W1200’s combination of an 1,800 ANSI Lumens brightness and a claimed full on/full off contrast ratio of 5,000:1. Figures like these have the potential to deliver some real image punch. 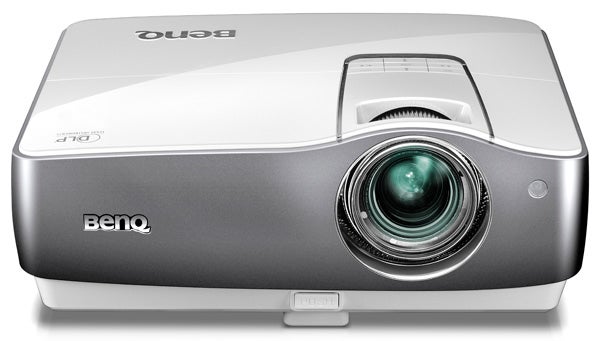 Heading into the onscreen menus keeps the pleasant surprises coming, as we’re presented with a long and comprehensive list of picture adjustments, along with three memory banks where you can store your own post-calibration image settings. Among the calibration highlights are a full primary and secondary colour management system; a gamma adjustment; Normal and eco lamp output modes; a flesh tone adjustment; and multiple levels of intensity for the frame interpolation system.

So extensive are the W1200’s calibration tools, in fact, that the projector impressively comes with the endorsement of the independent Imaging Science Foundation (ISF), who you can pay to come round and calibrate the projector to perfectly suit your viewing environment.

With so much flexibility inside the projector, we were surprised and disappointed to find the W1200 lacking a pretty basic set-up tool: optical vertical image shifting. Most people will thus be forced to use the projector’s keystone correction to get the sides of their pictures looking completely parallel – a real issue for purists given that all keystone correction does, essentially, is digitally manipulate the image’s proportions and thereby destroy the ‘pixel by pixel’ purity many home cinema fans demand from a full HD projector. Having said all that, the W1200 has an auto keystone system that works rather well, with damaging effects from the image manipulation proving hard to detect on any sensibly sized screen. 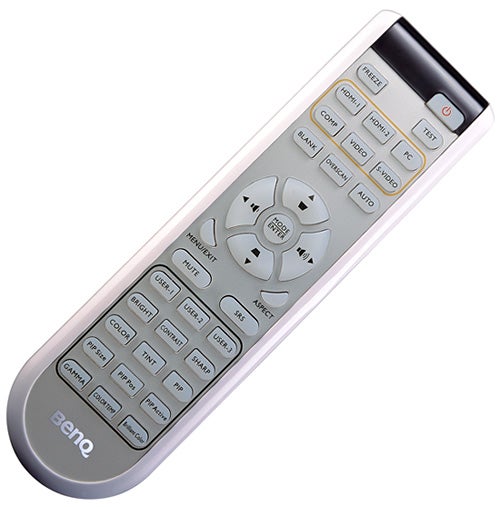 Nevertheless, we went out of our way to ensure for this test that we managed to get the image in the right place on our screen without needing to use keystone correction. And once we’d got this sorted, the first word from our lips was ‘wow’. Swiftly followed by ‘holy crap’.

For if there’s one thing the W1200’s pictures know how to do, it’s make an entrance. Immediately, even with the lamp output set to eco, pictures don’t just pop off our reference ScreenResearch screen, they erupt off it, driven by a scintillating combination of high brightness and intensely saturated colours.

It’s the vibrancy of the colours in particular that really makes the W1200 stand out from the similarly priced crowd. Colour-rich animated sequences look almost three-dimensional colours are so intense, but even straightforward video/film sequences look way more dynamic than usual. Occasionally it has to be said that a particular hue – usually a rich red or yellow – can appear too dominant. But the pluses of the W1200’s aggressive colours comfortably outweigh the negatives, making it appear that BenQ’s ‘special’ colour wheel coating is more than just a marketing stunt.

Look deeper than the W1200’s strident colours and you come across something arguably even more impressive: a remarkable combination of exceptional sharpness/detail with an almost complete lack of video noise. This combi is hard even for DLP projectors twice as expensive to pull off thanks to the technology’s tendency to suffer fizzing noise over moving objects or subtle dotting in dark areas when used in affordable implementations. So for the W1200 to have employed good enough lens optics, a sophisticated enough DLP chipset array and a good enough colour wheel arrangement to avoid such noise problems is a real game-changer for this level of the DLP market. 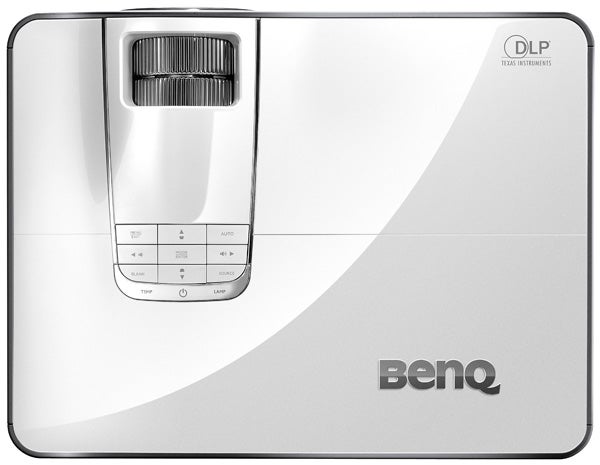 The quality of the W1200’s colour wheel is underlined, moreover, by surprisingly little evidence of that classic single-chip DLP problem, the rainbow effect. In fact, we struggled to detect the tell-tale red, green and blue stripes at all, even if we sat too close to the screen, flitted our eyes over the image or waved our fingers in front of our eyes. (The latter being a sure-fire way of detecting rainbowing – we haven’t just gone mad. Honest!).

The lack of rainbow noise is all the more impressive given how bright and punchy the W1200’s pictures are.

Also far better than expected for the W1200’s money is its motion handling. If you hate the very idea of frame interpolation, then rest assured that the W1200’s images don’t suffer as badly with judder as many cheap DLP projectors do. It helps, too, that motion problems aren’t exaggerated by significant DLP fizzing noise.

However, if you do fancy a go with the Frame Interpolation system, you’ll find that it’s remarkably good for the W1200’s money. So long as you leave it on a restrained setting, it does a great job of reducing judder without either making films look unduly ‘video like’ or, even more unexpectedly, generating much at all in the way of nasty side effects. 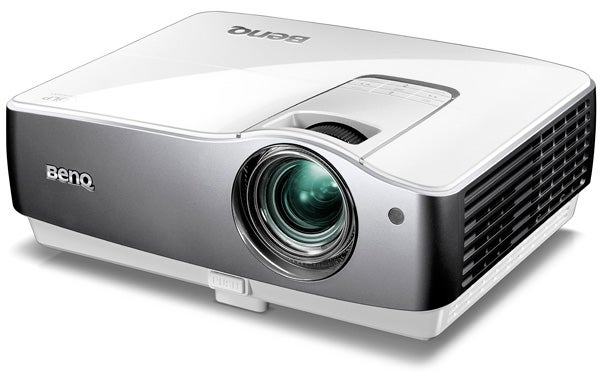 There are a couple of performance shortcomings with the W1200. First, while the punchy look to bright picture elements creates a good illusion of contrast, in truth dark areas of the picture look a touch washed out and a little short of shadow detail. What’s more, reducing the brightness setting to combat the slight greyness actually just crushes out more detail rather than producing an improved white/black balance.

To be fair, this issue probably reflects the fact that BenQ was thinking that the W1200 might often be used in a fairly casual environment, with a degree of ambient light to contend with. But if you’re able to use it in a completely blacked out room, we’d recommend even more than usual that you use it with a proper screen to give you a degree of control over the W1200’s light rather than just using a white wall. In fact, adding a curtaining system to cover the black bars when watching 21:9 films also considerably boosts the W1200’s perceived performance.

Our other issue with the W1200 concerns its fan noise. For while this is continually quite loud with the lamp set to normal, during our tests the fans also repeatedly shifted – for no obvious reason – in and out of their highest gear with the lamp set to Eco. And of course, a changing fan is potentially more distracting than even a quite loud but constant one. We guess this issue is a price to pay for the image’s impressive dynamism.

One final thing to say is that as with many other casual projectors, the W1200 has a built in sound system. Unlike most other projectors, though, the W1200’s sound system is surprisingly decent, equipped as it is with an unprecedentedly powerful 2 x 10W speaker array. Of course, this doesn’t alter the fact that using the projector for audio results in sound that doesn’t seem to be coming from anywhere near your screen, but we guess it could still be useful for watching sports or maybe gaming.

The W1200 does its best to turn us against it with its uneven fan noise, slightly flimsy build quality and worst of all its missing vertical image shift. But ultimately, no matter how much we tried to stay upset with it, the exceptional sharpness, purity, colour richness and motion clarity of its pictures just kept putting a big stupid grin across our budget-conscious faces. And if that isn’t a good reason to recommend a product, we don’t know what is.