A couple of months ago we found ourselves seriously impressed by BenQ’s W1200 DLP projector. Especially taking into consideration its £1,200 price tag.

So we’re intrigued to say the least to find ourselves sat down today with another new BenQ model, the W1100, that seems to have been based on the same chassis, but which costs only £828. This makes it a potentially hugely attractive proposition – especially as one of the main differences between the W1100 and W1200 is that the cheaper model doesn’t have a frame interpolation system sported by the W1200, which video purists probably wouldn’t use anyway!

Aesthetically the W1100 is identical to the W1200. Which isn’t a bad thing if you’re not sitting too close to it, as its combination of glossy white and matte grey colours works nicely, as do its rounded edges and the gentle lens-accommodating ‘hump’ on its top edge. The only catch is that closer inspection finds its build quality looking and feeling a tad flimsy.

The W1100 also enjoys the same connections as the W1200, namely two (v1.3) HDMIs, a D-Sub PC port, an RS-232C jack, a monitor output, a component video input, a composite video input, an S-Video input, a USB service port, both RCA and 3.5mm audio inputs, and a 12V trigger output for, say, driving a motorised screen. This amounts to a very satisfactory set of connections for the W1100’s price level.

Inside the W1100, meanwhile, you can find a 4-speed, six-segment (RGBRGB) colour wheel, and a DarkChip 2 (DC2) DLP chipset from Texas Instruments. These tools, in conjunction with the 230W lamp and other optics, are reckoned to turn out a very high maximum brightness of 2000 ANSI Lumens, plus a solid claimed contrast ratio of 4500:1.

It should be noted that the W1200 claims a higher contrast ratio of 5000:1 and lower brightness of 1800 Lumens – differences that actually point towards quite obvious differences in image quality, as we’ll discover later.

While we’re on the subject of W1100/W1200 differences, the cheaper model lacks the proprietary colour-boosting coating found on the W1200’s colour wheel – though both models feature full 10-bit colour processing.

One other surprising internal spec of the W1100 concerns its audio. Most budget projectors sport some sort of built-in audio system, so that casual users can just set the projector up wherever and whenever they like and still enjoy sound to go with their pictures. However, as well as producing sound that’s spatially distant from the pictures they’re supposed to accompany, the speakers built into projectors are usually pathetically underpowered. Remarkably, though, the W1100 – like the W1200 – claims 2x10W of output power for its integrated speakers, and even carries SRS TruSurround processing to make its soundstage appear more expansive.

Setting the W1100 up immediately reveals a lack of any optical image shifting. But this is wholly predictable where the sub-£1000 projector market is concerned, leaving problems with trapezoid images having to be solved via a provided digital keystone adjustment that manipulates the image digitally to correct distortions. Either that or you make sure it’s correctly lined up with your wall!

Focus and zoom are handled with passable precision via two wheels around the lens accessible via a hole on the projector’s top side, and we were quite impressed to find the projector delivering a 1.5x level of optical zoom. This compares very handily and helpfully with the 1.2x zoom of the similarly priced InFocus SP8600 – a rival we’ll be coming back to in more detail later on. 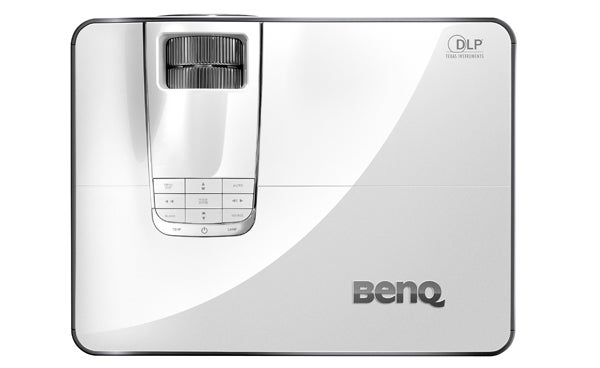 Other physical set up aids include a simple drop-down leg under the front edge to aid angling the projector up onto your screen from a desktop position, while calibration tools within the decently organised and presented onscreen menus are surprisingly wide-reaching.

The highlights from our movie fan point of view are a series of gamma presets that include the 2.2 setting almost always preferable for watching films; and very fine hue, saturation and gain tweaks for the red, green, blue, cyan, magenta and yellow colour components. Tools like this used to be saved for more expensive projectors than the W1100, but they’re apparently becoming standard on budget models now too. Certainly the InFocus SP8600 offered a similar level of image customisation.

There are also a few picture tools you need to treat with kid gloves or leave well alone – especially the noise reduction and detail enhancement tools tucked within a ‘clarity control’ menu. But the fact that a projector as cheap as the W1100 in any way rewards time spent calibrating it is achievement enough for its money.

After getting quite excited by its specs, though, we have to confess to feeling just a touch disappointed with the W1100’s performance, finding it quite a bit less satisfying than that of both its W1200 sibling and, more troublingly, the similarly priced InFocus SP8600.

There are four reasons for the initial sense of disappointment. First, the  W1100’s black level response is clearly less profound than that of the other two models, leaving dark areas of the picture looking greyer and less detailed. Second, the W1100’s pictures look noisier than those of the other two projectors. To be fair, the InFocus looks slightly noisier with certain colours, particularly oranges and reds. But across the picture as a whole, the W1100 is more prone to DLP’s potential fizzing noise.

The W1100’s colours feel a touch flat compared with the W1200 and InFocus SP8600 (which uses an RGBCMY colour wheel versus the RGBRGB one of the W1100) too, and finally the W1100 seemed less comfortable with camera pans than the other two models, suffering with more overt judder and loss of clarity. In this respect we found ourselves missing the Frame Interpolation processing of the W1200 more than we’d expected to.

Even had we not seen the InFocus SP8600 we would have found the issues just described sufficiently troubling to make us strongly suggest that you save up for the markedly superior W1200 instead, at least if you’re first and foremost a film fan. But if around £800 is your maximum budget, the InFocus seems to us to be clearly the better option.

This isn’t to say, though, that the W1100 isn’t without its charms. Its HD pictures are detailed and sharp, its colours still look very natural for such a cheap model despite their reduced saturations, and actually, notwithstanding the inevitable screen/projector spatial dislocation, the 20W audio system is really very usable in emergencies.

The W1100’s remote control is much more friendly, large and just plain usable than the credit card-like thing shipped with the InFocus, too, and its pictures to our eyes contain fractionally less rainbow noise. Though in reality neither projector suffers at all badly from this once irksome DLP failing. 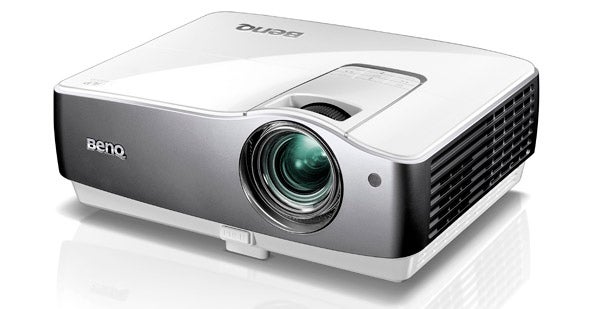 Perhaps most important of all, though, is the way the W1100’s increased focus on brightness over contrast helps its pictures retain more punch in relatively bright rooms. Both the W1200 and InFocus SP8600, by comparison, seem calibrated for use ideally in very dark rooms.

The last thing we should say about the W1100 is that strangely, while its fan noise with the lamp output set to normal is just as high as that of the W1200, in eco mode its fans didn’t keep adjusting their output noise nearly as regularly and distractingly as we noticed with the W1200. There’s still a slightly whiny timbre to the fan noise in eco mode, but overall it’s certainly preferable to the shifting noise levels we noted on our (possibly slightly faulty?) W1200.

If the W1100 had arrived before we’d spent so much quality time with its W1200 brother and the InFocus SP8600, we might well have loved it. Certainly its ability to deliver punchy pictures even in rooms with a degree of ambient light in them deserves to win it many fans among relatively casual users. For people able to get the most from a projector by blacking out their rooms, however, both the InFocus and step-up W1200 models are superior options.