Not so long ago we tested the BenQ W1060 projector, and found it OK but nothing special – a bit dated, to be honest. So we weren’t entirely surprised when, soon after that review appeared, BenQ approached us to see if we fancied having a look at the new successor to the W1060. That new projector was the £699 W1070, and it’s duly perched atop our projection stand as we speak.

Aesthetically BenQ’s newcomer is hit and miss. Its footprint is impressively small, making it well suited to the relatively casual ‘pop it in a cupboard when it’s not being used’ market most likely to be after so affordable a projector. Its combination of a glossy white top with matt silvery sides works nicely too, though the extensive amount of grilling around the sides might not be to everyone’s tastes.

BenQ W1070 – Leaking light
We’re also a bit alarmed by the amount of light spilling out of these grilles, especially the one to the side of the lens. This suggests that the W1070 certainly isn’t delivering all of its claimed 2000 ANSI Lumens of potential brightness out through the lens. 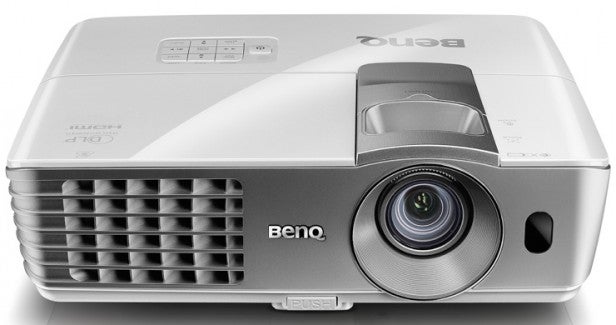 Talking of the lens, it’s a pretty uninspiring looking thing. It’s very small, and doesn’t look like it’s using particularly high quality glass. It comes as little surprise to find that this tiny lens supports only a very paltry amount of optical zoom. This made it quite difficult to get the BenQ W1070 positioned in a helpful place in our long test room, especially as the projector has clearly been designed with relatively small rooms in mind.

BenQ W1070 – Poor zoom/focus controls
It’s not just the limited amount of optical zoom that irritates either; we also didn’t think much of the zoom and focus rings the projector provides. They’re contained within quite a deep recess and are stiff to turn, making fine adjustments difficult to achieve.

There is one good bit of set up news, though: vertical image shifting. Admittedly this is limited in scope and only achieved via an almost painfully cheap-looking and faffy little screw hidden under a flimsy slide-back cover on the BenQ W1070’s top. But being able to optically shift the image up or down at all is a boon on a £700 projector, hugely reducing the likelihood that you’ll have to resort to the digital distortion nastiness of the provided keystone adjustment to get the image’s edges straight.

BenQ W1070 – Digital zoom
The W1070 carries more digital distortion nonsense in the form of a digital zoom to bolster the puny optical zoom on offer. But using this greatly increases the picture’s softness and noise levels, and so obviously isn’t recommended. 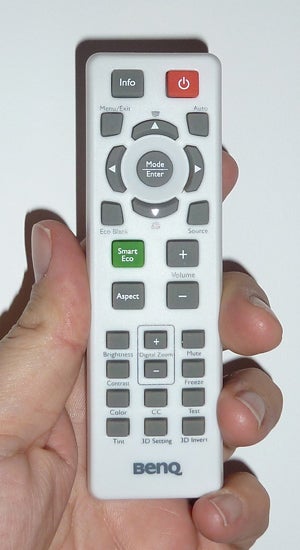 The remote control you get with the W1070, meanwhile, scores a major faux pas by not being backlit. This makes it painfully tricky to use in the sort of darkened room you’re most likely to be using the projector in – especially as the remote is unusually small and, as a result, rather crowded.

BenQ W1070 – ISF certification
The onscreen menus are a touch small too, but they’re reasonably clear nonetheless, and shouldn’t present anyone with any brain ache. There are a couple of unexpected surprises in there too considering how affordable the W1070 is, in particular an ‘ISF’ section that an engineer from the Imaging Science Foundation could use to professionally calibrate the projector to your specific room requirements. This proves that the projector has enough set up tools to earn the ISF’s official backing.

Among these tools are a series of gamma presets (including the most video-friendly 2.2), a Black Level adjustment, red/green/blue offset and gain adjustments for fine tuning the colour temperature, DLP’s Brilliant Colour option which boosts the image’s saturation levels, and a full colour management system where you can adjust the hue, gain and saturation of the red, green, blue, cyan, yellow and magenta colour elements.

The W1070’s lamp adjustment section is more interesting than most too. For as well as the predicted Eco (low light output) and Normal modes, there’s a Smart Eco setting which is essentially a dynamic contrast system that continually adjusts the light output to suit the requirements of the image being shown.

As well as reducing power consumption to 163W on average versus the 290W used in Normal mode, it does a handy job of helping the projector achieve a better balance of black level depth and shadow detailing than you get with either of the other lamp modes.

BenQ W1070 – Impressive stability
It does this, moreover, without causing the sort of nasty distracting brightness ‘jumps’ you sometimes see with dynamic lamp systems – especially those on relatively cheap projectors. In other words, the Smart Eco mode is a very welcome addition to the spec sheet. 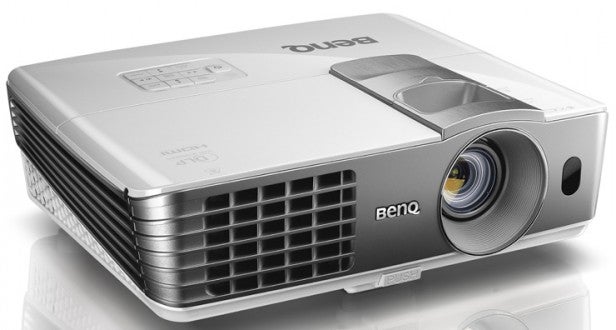 In fact, until we discovered this Smart Eco mode we felt a touch underwhelmed by the W1070’s pictures. Dark scenes looked more greyed over than we felt comfortable with even at the W1070’s price level, and shadow detailing was only OK.

Switching to the Smart Eco mode, though, immediately and radically improved both these picture elements, with blacks looking far more convincing, and shadow detail suddenly reaching a level that ranks as pretty exceptional for the W1070’s price level.

BenQ W1070 – Turning down the noise
After another quick adjustment we also managed to greatly improve another one of our initial issues with the BenQ W1070’s pictures: their rather high noise levels. Past experience suggested this could be an artefact of the projector’s Brilliant Colour option, and lo and behold, as soon as we turned the feature off noise levels dropped considerably, leaving images less affected by fizzing and colour sparkles.

Yes, turning off Brilliant Colour means the image’s colour saturations take a slight hit too, but actually for us this results in colours looking more natural and even-handed.

With our initial black level and noise issues largely resolved, we were suddenly able to appreciate just how much better the W1070’s pictures are than they’ve any right to be for under £700.

BenQ W1070 – Motion handling
Motion is handled surprisingly well, with seemingly no unnatural judder, minimal blurring, and we’re relieved to say, only the rarest and subtlest trace of DLP’s old fizzing noise issue as skin tones move across the image.

Contrast also looks good for most of the time. Extremely dark shots still reveal a degree of general clouding (with a fractionally green undertone using the Smart Eco mode), but this clouding is far lower than you would normally get at the sub-£700 level – not least because most projectors that cheap have been built first and foremost for the very different colour and brightness needs of the data projection market rather than the home theatre market.

BenQ W1070 – Impressive contrast
We were also impressed by the way the projector was able to combine dark and light objects within a single frame. A great example of this can be seen in the courtyard showdown towards the end of Harry Potter And The Deathly Hallows Pt 2, where Voldemort brings Harry’s ‘dead’ body to Hogwarts. The darkness of the clothes combines startlingly well with the paleness of the faces of Harry’s school chums and the misty mountainous backdrop, delivering a picture that wouldn’t look out of place on a projector costing twice as much as the W1070.

This scene and much darker ones like the start of chapter 12 reveal in an instant just how much better the BenQ W1070 is than its W1060 in terms of both the depth of black level and amount of shadow detail it delivers.

BenQ W1070 – Video-friendly colour
The W1070’s enhanced contrast also improves its colour response, helping it produce colours that are surprisingly punchy but also accurate, regardless of whether you’re watching a film with tricky, often low-lit skin tones like Harry Potter or Prometheus, or a dynamic cartoon like The Lorax.

The more we watched the BenQ W1070 strut its budget stuff, the more it occurs to us that a pretty key part of what makes its pictures so much fun for movies is their brightness. Its 2000 Lumens claimed output is a potent image tool when harnessed to a projection system that’s clearly tailored towards video rather than PC use, helping colours look punchy, bright scenes look extremely vivid, but also dark scenes look unusually rich in detail and depth.

Sharpness
Yet more good news concerns the W1070’s sharpness. It’s a full HD model (impressive in itself for £699), and delivers every pixel of that resolution onto the screen, bringing forth all the detail we love to find when watching high quality Blu-rays. 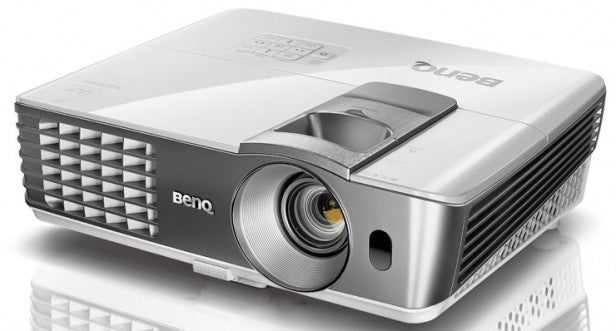 There are a trio of other problems to report too, though. First, even with the Brilliant Colour system turned off images remain a touch noisier than we’d like (but don’t feel tempted to use the provided NR, as this softens pictures and can make them look processed).

BenQ W1070 – Running noise
Second, when using the Smart Eco setting you can occasionally be distracted by a slight adjustment in the noise coming out of the projector if a) you’re watching a quiet moment and b) you’re sat fairly near the projector. Though to be clear about this, the W1070 is by no means a noisy projector generally considering how small and cheap it is.

Finally, black levels even at their post calibration best are only fair to middling compared with the best sub-£1200 projectors – though it’s surprisingly easy to see past this on account of the impressive shadow detail representation and the way the projector still delivers bright parts of dark scenes with plenty of punch. Plus, of course, the W1070 doesn’t cost £1200, it costs under £700.

BenQ W1070 – Rainbow Effect
If you’re extremely sensitive to the rainbow effect phenomenon associated with single-chip DLP projectors, you might just see signs of the tell-tale RGB striping over very bright objects if they appear against very dark backgrounds. But in reality the extent and obviousness of the rainbowing is remarkably limited for the W1070’s money, thanks to its 6x RGBRGB colour wheel.

You wouldn’t get any rainbowing at all if you bought an LCD projector instead, of course. But then neither would you get the same sort of contrast unless you spent considerably more. 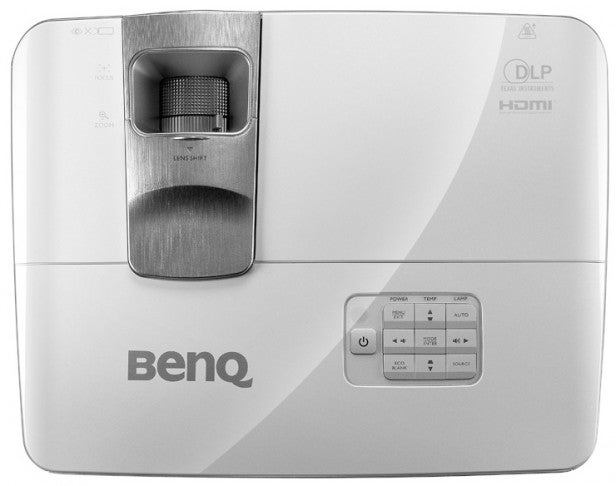 LCD also likely wouldn’t give as good a 3D performance as the W1070’s DLP engine delivers, at least when it comes to crosstalk. For while cheap LCD projectors really struggle to refresh fast enough to avoid the double ghosting phenomenon, the BenQ W1070 hardly suffers with it at all, helping its 3D images look sharp and detailed, especially as motion is well handled too.

The W1070’s improved contrast also aids its 3D images versus the rather disappointing efforts of the W1060 by allowing dark backdrops to look deeper and more detailed. And wrapping up a solid 3D effort is the decent levels of brightness and colour saturation retained even when you’ve got a pair of (optional extra) 3D glasses on.

Once we’d managed to work round its setup limitations and figured out how to avoid a couple of initial picture niggles, we were left with pictures from the BenQ W1070 that comfortably surpassed our expectations, making it just the latest entry on a freakishly long list of 2012 projector bargains. People on the hunt for an exceptionally cheap but still movie-loving projector have never had it so good.