Like our computers, which went from boring beige boxes to sleek LED-lit designer machines, monitors have become ever more style conscious. But despite some real stunners making their way through the TR offices, LCD monitors that focus primarily on looks are still an emerging market. Perhaps the most successful example of such a monitor to date is Samsung’s Pebble range, and the company doesn’t look to be letting up, with its gorgeous Touch of Colour series stealing quite a few headlines and hearts.


One company you would not necessarily associate with eye-catching looks is BenQ, but that might be set to change, because its V2400W under review today is probably the most attractive 24in monitor we have ever seen. 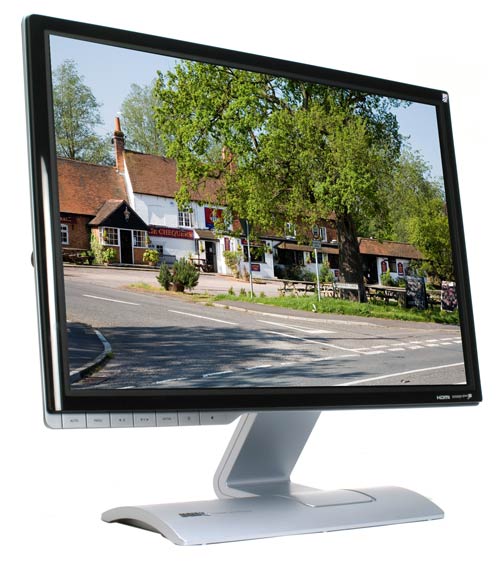 And BenQ is not modest about its achievement either. In its marketing, it refers to things like “magic through unexpected asymmetry”. It has even come up with a new category of design; Kinergy-Design, setting a “new trend in the world of design which is found between minimalism and luxury: simple, yet extraordinary”. To me it just sounds like its new monitor wasn’t the only thing BenQ applied asymmetrical principles to. But cutting past literally a page of near-poetic marketing fluff, what does the V2400W actually bring to the desk to cause such unusually extensive praise?


Apart from having already received 2008 iF and Red Dot design awards, the V2400W is ”the thinnest 24in LCD monitor in the world”, measuring a mere 6cm (2.44in) at its maximum depth. The bezel is also among the slimmer ones in the market, and the entire affair is set on a uniquely positioned, off-centre base. 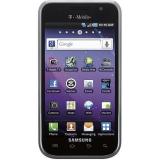 But before getting caught up in describing its inspired design, let’s get a major disappointment out of the way. Even though the V2400W comes equipped with HDMI and DVI connections in addition to VGA, the only video cable you will find in the box is the latter: analogue VGA. This might have been acceptable in the days when DVI was just emerging as a standard, but those days are thankfully long gone. By failing to provide digital connectivity out of the box, BenQ is not only doing a disservice to its customers, but also to its display, for not allowing it to show its best.

However, unwrapping the monitor itself made up for a lot. The base and screen come as a single, attached unit. Despite losing some flexibility this means no assembly is required, so we could put it straight on a desk to gaze in awe at its sensational slimness. The difference in depth between the V2400W and conventional 24in models is not just noticeable, but dramatic, and BenQ deserves praise for the amazing feat of engineering its designer monitor embodies.

It doesn’t do any harm that the V2400W comes with killer looks to match its slender proportions. The matte screen is surrounded by an unusual double bezel, with an inner surround of matte plastic and a slim glossy-black outer bezel. People who find reflective bezels distracting will be somewhat appeased by the inner surround, which also makes the outer one look even slimmer than it actually is.


This combination creates easily the most stunning implementation of a shiny bezel I’ve seen on a PC monitor, even matching some of the designer televisions that cost ten times as much. It is further offset by a matte silver trim, which, rather than cheapening the design or adding bulk, just lends an extra touch of class and emphasises the V2400W’s svelte contours.

BenQ has kept its gorgeous bezel quite clean, marred only by HDMI and BenQ’s ‘seneseye+photo’ logos in the bottom-right corner. Though most monitors that have it display HDMI logos, in this case it distracts more from the look than usual. Usefully, though, there’s a headphone output that enables you to listen to the audio contained within the HDMI signal.


Back to the bezel and thankfully the purple AMA (Advanced Motion Acceleration: BenQ’s name for response time overdrive) sticker on the top-right is removable. Meanwhile, the BenQ logo and the display’s model number are sensibly removed to the stand, where they actually look quite stylish.

Moving on to the rest of the monitor, BenQ radically defies convention when it comes to controls. Where other designer monitors try to hide or at least minimise their buttons, the V2400W incorporates them prominently as part of its asymmetrical design. They are silver to contrast with the bezel and located just below the screen on the left, balancing the silver stand that’s positioned towards the right.


Personally, while I don’t think the design works well enough to not detract slightly from its overall look, at least it makes the V2400W’s controls imminently accessible. Despite having all the appearance of physical buttons, they’re actually touch-sensitive. Those who read the review of the Hyundai W241D might know I tend to dislike such controls for providing no tactile feedback and a lack of responsiveness, but here BenQ has implemented a very usable solution.

Not only are the controls clear and legible, but they have lovely blue backlighting that activates at a touch, making them perfectly visible in complete darkness. In terms of feedback, they are physically differentiated by small gaps, and also emit a small beep (which can be turned off) to confirm successful ‘presses’.


Unfortunately, in terms of physical quality, the V2400W isn’t quite as accomplished. Build quality isn’t the best: any pressure makes the casing creak, and apart from the solid plastic stand, the entire monitor feels a tad flimsy. But I guess it’s the price you pay for the extremely thin profile, and construction is by no means shoddy: with due care the BenQ should last as long as any other. 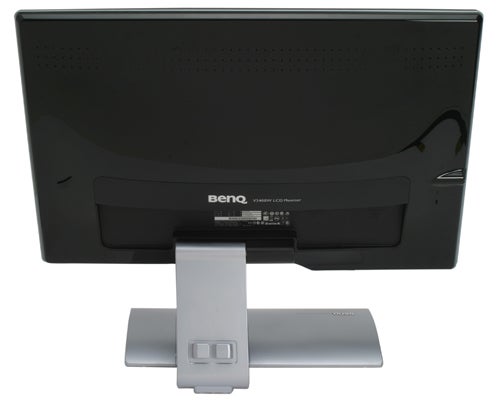 If, like me, you don’t think the stand is quite as attractive as the rest of the V2400W, you’re out of luck. There is no way to detach it, and as you might have guessed from that, no way to wall-mount this display either – a crying shame given its class-leading thinness. Moreover, the cable management clip looks a little ugly and cheap, though it does at least do its job competently enough. 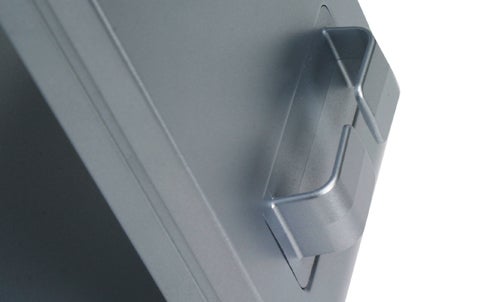 Although lack of adjustments is a complaint with many budget monitors, in the case of the V2400W I would say it’s another price you pay for its design. The only concession to ergonomic comfort is a 25 degree tilt. Again, with the extremely narrow bezel, it’s a real pity BenQ couldn’t find a way to include pivot, and the lack of height adjustment is a consideration for those with low desks.


Things start to look up when it comes to the OSD, however. Its design is almost as impressive as the monitor, with full-colour icons and context-sensitive button allocation. Functions are clearly displayed, so you always know what ‘key’ you need to touch, and overall it’s easy to use.

Best of all, though, not only does the V2400W feature a dedicated input selection button, but it can switch through inputs instantaneously – without the constant delay and rescanning that plagues so many of its competitors. You simply do not realise how incredibly annoying and unnecessary this process is until you come across the seamless experience offered by the BenQ.


On the other hand, you do have to trawl through the menu to get the aspect ratio controls, but at least they work well, offering modes that cover all the essentials. There’s the usual fill mode (something you should generally avoid), a 1:1 direct pixel mapping mode (ideal for 1080p sources), and an Aspect mode that cleverly stretches the picture only as far as it can without loss or distortion. 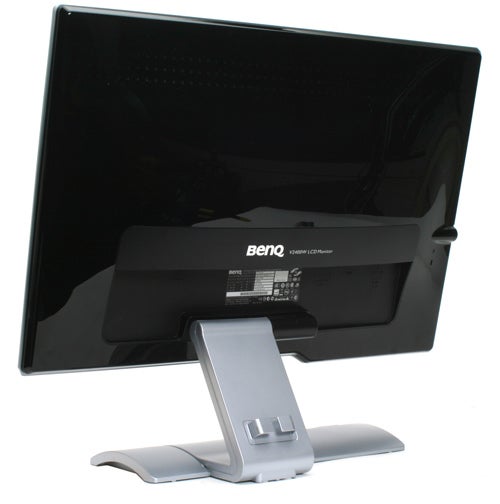 Finally we come to image quality, an area where designer monitors have consistently failed to match their exteriors. Let me just start by saying that, ironically, designers will want to look elsewhere, as the BenQ does not manage to avoid most of the classic TN panel pitfalls.


Viewing angles are typically poor, with strong loss of contrast and brightness and some colour shift at anything even approaching the quoted 160 degree angles. In grey-scale tests, the V2400W was not very adept at distinguishing whites or blacks at either end of the scale, with a brown/yellow tinge creeping into some grey shades. One area worthy of particular mention, though, is the predominately low level of backlight bleed. Only a small amount of bleed was noticeable from the bottom right corner and lighting across the panel was largely clean and even.


Image presets, for which the V2400W has a dedicated shortcut button, include movie, dynamics (my favourite mode for gaming), photo and standard, in addition to a less common sRGB mode. Thankfully, together with LG’s 20in Flatron L206WU, BenQ’s latest belongs to that rare breed of monitor where the dynamic contrast processing actually works. Like with the LG, a split-screen demo mode shows you its effects in real-time and you’ll immediately notice a difference. With it enabled colours are richer and more vibrant, and blacks visibly deeper. The only costs are slightly over-saturated skintones, and a reduction of dark detailing that’s so minor you’ll be hard pressed to even notice.


The experience actually makes the native 1,000:1 contrast ratio a believable figure, though not living up to its 3,000:1 dynamic claim. This system helps make the V2400W a capable gaming and movie display, though it should go without saying that graphical work is not recommended. 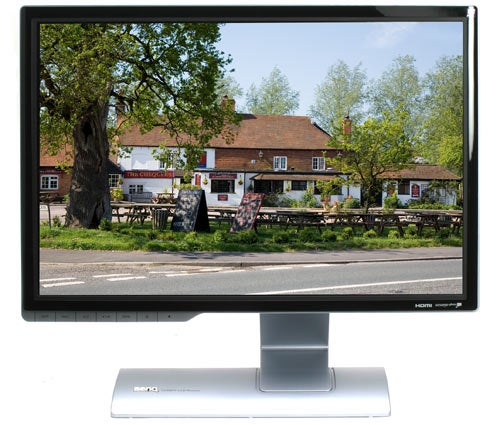 It is slightly ironic that BenQ’s biggest competitor might be BenQ, in the form of its G2400W. It’s around £50 cheaper and offers the same connection options. But thanks to less backlight bleed the V2400W has slightly better image quality, and of course there’s its gorgeous lines to consider. A more viable competitor might be the HP w2408h, which for the same money offers attractive design, all the adjustability you could want (including pivot), and a four-port USB hub. But, if you desire the slimmest and most attractive there is, the V2400W still comes out on top.


For a 24in designer monitor, BenQ’s V2400W is very affordable. And though it is unfortunate that it fails to match its stunning looks and incredibly slender chassis with equally amazing image quality or ergonomics, it still offers a reasonable selection of inputs, some clever processing, and a decent entertainment and office experience. Basically, if you want the slimmest 24in LCD monitor in the world, the V2400W obliges without compromising too much where it matters or leaving you broke.