In an era where the super-brands and mega-manufacturers are seemingly able to dominate the market with so little effort, is there any room for the smaller, budget-brand manufacturer? BenQ is a Taiwanese company that’s probably better known for producing attractively priced but generally well-made projectors such as the Joybee GP2 That said, the company also has a bit of form for producing budget compacts. It’s been quite some time since we last reviewed a BenQ camera – nearly four years in fact – however the GH700 does look, on paper at least, to be quite an attractive proposition. 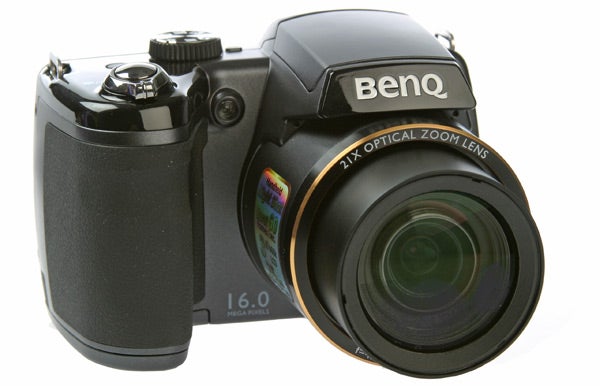 For a fraction over £200 (less if you pay in Euros) the GH700 comes with a Sony-manufactured 16MP backside-illuminated CMOS sensor, a 21x optical zoom, a 3inch 460k-dot rear monitor and the ability to shoot 1080/60i/30p Full HD movies. The big question then, is whether this makes the GH700 a genuine bargain worthy of serious consideration or merely a cheap plastic pretender? Let’s take a closer look and find out…

BenQ doesn’t provide any concrete details on the image processor used by the GH700, other than to claim it’s a “high-speed, high-efficiency digital signal processor” that’s capable of recording 10fps at full resolution, as well as delivering 1080/60i/30p Full HD movie recording abilities. Dig a little deeper though, and you soon start to find some compromises. Standard sensitivity, for example, ranges from a rather limited ISO 160 to 1600 in regular use, with the expanded settings of ISO 3200 and 6400 only available when resolution is set to 3MP or less. Likewise, EV compensation only stretches to /-2EV. 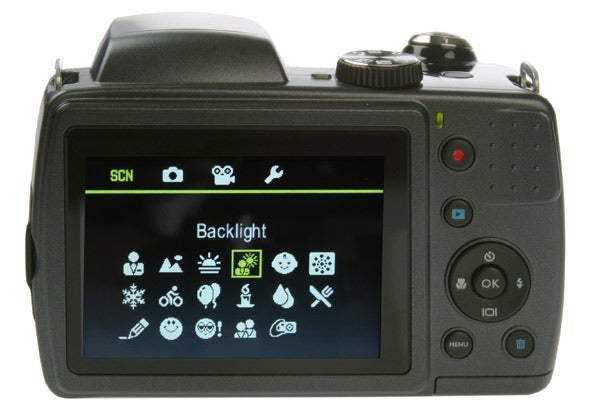 On the main shooting mode dial you’ll find a reasonably generous albeit fairly standard range of predominantly point-and-shoot exposure modes. These include an Intelligent Scene mode that automatically detects the correct scene mode and 17 individual Scene modes. Also offered is a Handheld Night mode and a Night Portrait mode, both of which automatically fire off multiple exposures and then combine the results into a single image to limit the unwanted effects of noise.

Continuing around the mode dial, there’s an automatic HDR that takes two consecutive images – one exposed for highlights and the other for shadows – and then blends them into one image to increase the overall dynamic range. Rounding things off on the point-and-shoot front is a Program mode that allows for a bit more user control over things like ISO and White Balance, and a Continuous shooting mode that’s essentially the same as Program mode, only with the GH700 shooting continuously rather than in Single-shot mode.

There is a Manual mode that allows you to set your own Aperture/Shutter speed combination, although it should be noted that this only offers a choice of two aperture settings – a high or a low setting – with none of the aperture values in-between the two available. Surely it’s no coincidence that we’ve seen similar restrictions on some Sony compacts in the past – the HX9V for example. 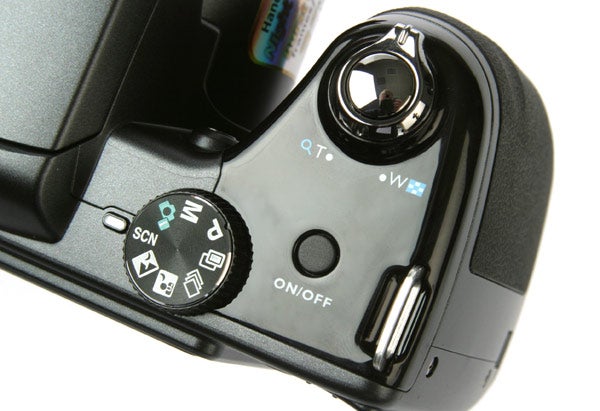 The last notch on the shooting mode dial is given over to Movie recording mode, with the GH700 offering a maximum capture quality of 1080/60i/30p Full HD capture. This can be lowered to 720/60i/30p HD or 640 x 480 VGA at 30fps. In addition there are also a couple of Hi-Speed Movie recording settings – 120fps or 240fps, both of which play in slow-motion at 320 x 240 pixels. Sound is recorded in stereo but there’s no way to attach an external microphone.

The design of the GH700 is pretty basic and, as such, errs on the side of functional rather than stylish. Physical buttons are kept to the bare minimum, although what is there is easy enough to reach. If you need to change settings then, chances are, you’ll need to enter the in-camera menu. Here again, things are kept to the bare minimum with barely two pages of options. Novice photographers looking for a simple, straightforward camera will doubtless find the GH700 pretty easy to get on with in this respect.

Build quality feels solid enough with the camera encased in a robust plastic shell complemented by a metal lens ring and top-plate. The gold detailing around the lens rim does, to our eyes, look a bit cheesy though. Overall, while it certainly doesn’t feel cheap and nasty, it doesn’t have much of a premium feel either. 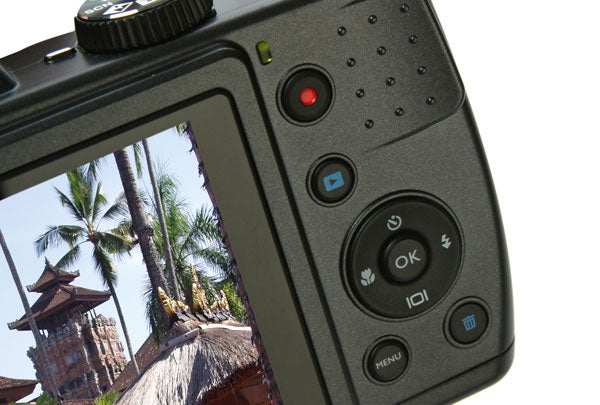 The finger grip is noticeably deep, on account of it having to accommodate the camera’s power source – namely 4x AA batteries – and those with smaller fingers may find this to be a bit of an issue in terms of comfort. There are good arguments both for and against using regular batteries; on the one hand it’s undoubtedly helpful when you’re caught short on power and a shop is close to hand, but on the other using disposable batteries isn’t the most eco-friendly approach. Our advice would be to invest in a good set of rechargeable batteries and a charger at the outset.

Starting the GF700 up from scratch, the camera takes a fraction over four seconds to switch itself on and be ready to shoot, which is fairly standard. Autofocus is limited to a choice of Face Detection, Centre or Wide Centre modes – there are no AF points dotted elsewhere around the screen towards the edges or corners, so you’ll need to employ the focus-recompose technique if you want to set an alternative point of focus away from the centre of the frame. 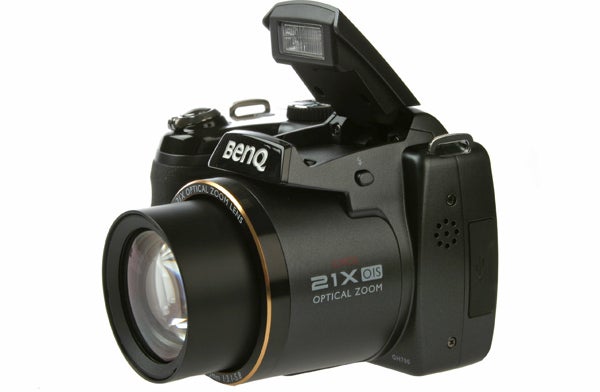 Autofocus speed is plenty fast enough outdoors in good light, but does take a pretty big hit indoors under less than ideal artificial light, or outdoors in twilight conditions or at night. An orange-tinted AF Assist light is built into the front of the camera body, and this can help out in dim conditions although its range is limited to a few feet at best.

Processing times are a bit on the slow side; when the GJH700 is set to Single-shot mode it takes around two seconds for the camera to process images, while in Continuous mode 10 full resolution JPEGs take just under ten seconds to process. In both Single-shot and Continuous modes you are unable to shoot any more images while the buffer is clearing. 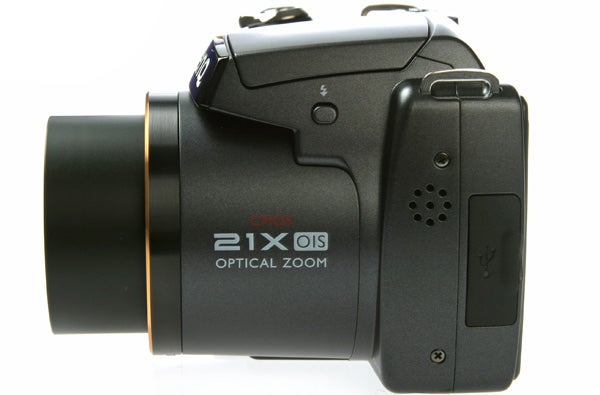 Image quality holds up pretty well on the whole, just so long as you’re aware of the camera’s limitations in advance. While the 1/2.3in Sony-made CMOS chip is perfectly capable of producing punchy images with vibrant colour in good, even light, it struggles with high-contrast scenes and when the camera is used at higher sensitivities.

Metering tends to be fairly accurate, at least in even lighting situations, although in high-contrast situations that extend beyond the GH700’s limited dynamic range the camera almost universally tends to expose for shadows at the expense of blown highlight detail. There is an HDR option you can call upon should you wish and while the results are just about acceptable they don’t look particularly natural.

There are also some issues with fine detail, which can appear smudged or “painted on” when images are viewed at larger sizes. This is partly a result of the aforementioned JPEG compression but also (at high ISO settings at least) some fairly aggressive in-camera noise reduction. To be fair to BenQ though, this is a fairly common problem with compact cameras that use small sensors and is certainly not unique to the GH700. 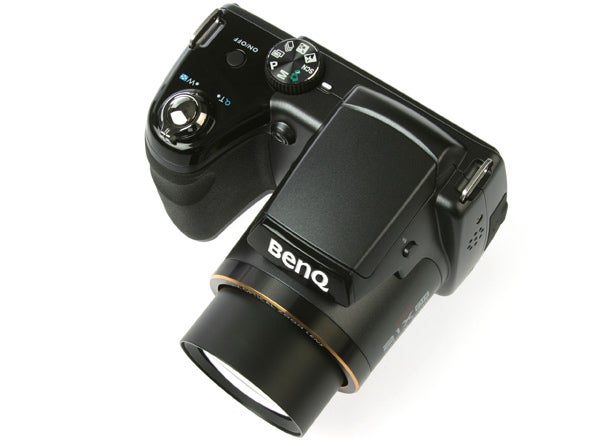 Much more damning than any of the issues highlighted above was the performance of the zoom. We found the lens to be especially soft when used at its telephoto extremes despite the camera’s built-in Optical image Stabilisation (OIS). In fact, we struggled to get any sharp images of distant objects – even when using a tripod and the self-timer, and with the OIS function switched alternatively on and off. In addition, we also found the lens produced noticeable vignetting and quite visible barrel distortion at 28mm.

Verdict
The BenQ GH700 is a budget 21x superzoom that comes with a Sony-made 16.2MP backlit CMOS sensor and Full HD movie recording. Despite these impressive headline specs, other features are a bit limited and it does feel and operate like a budget camera. Image quality holds up pretty well so long as the light is plentiful and even, although beyond this the GH700 can struggle. The biggest letdown, however, is the poor performance of the lens at its telephoto extreme – at 525mm we struggled to get a sharp image of objects in the distance, which kind of undermines the point of having such a long focal range in the first place. 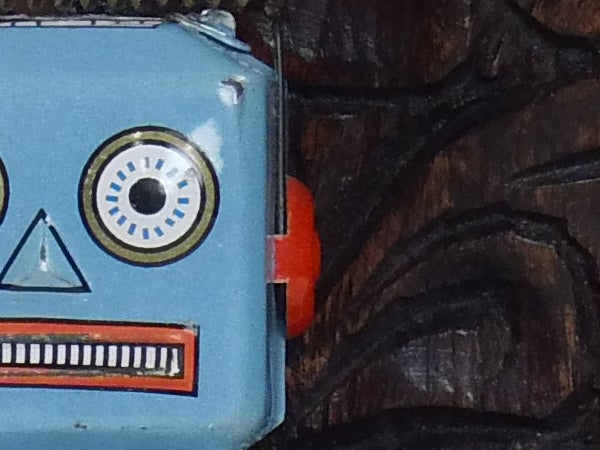 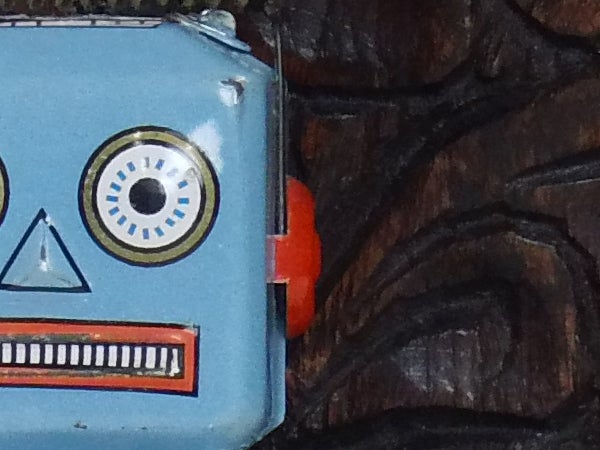 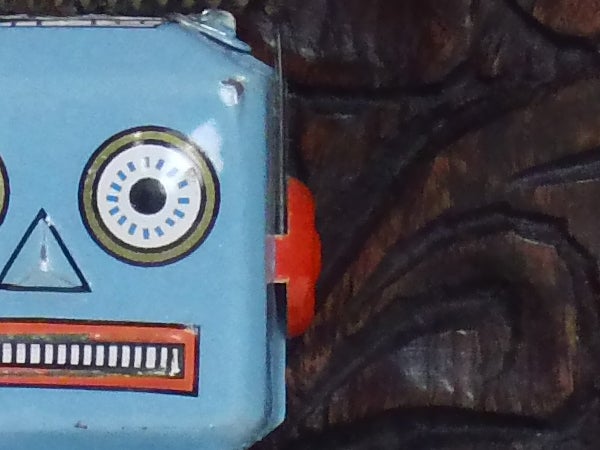 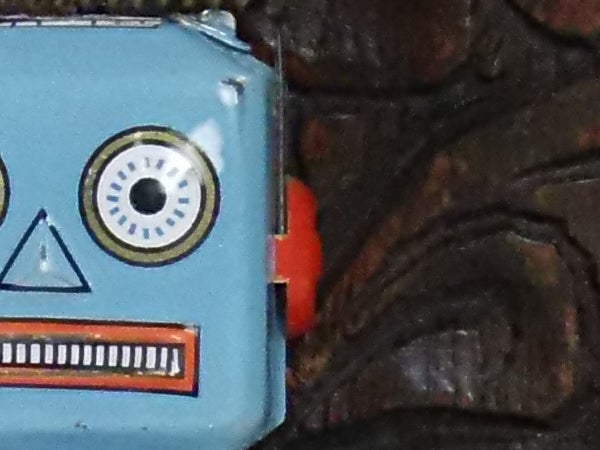 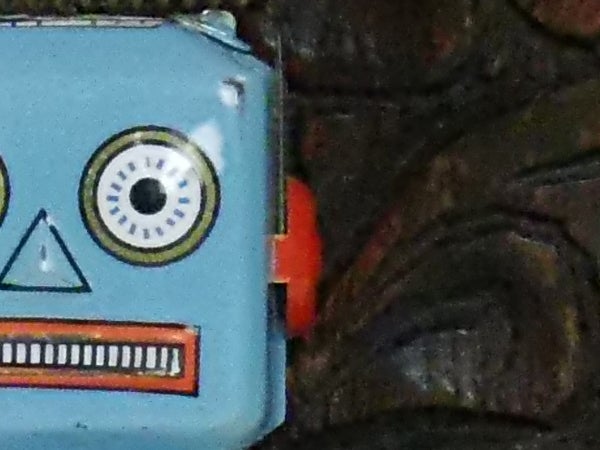 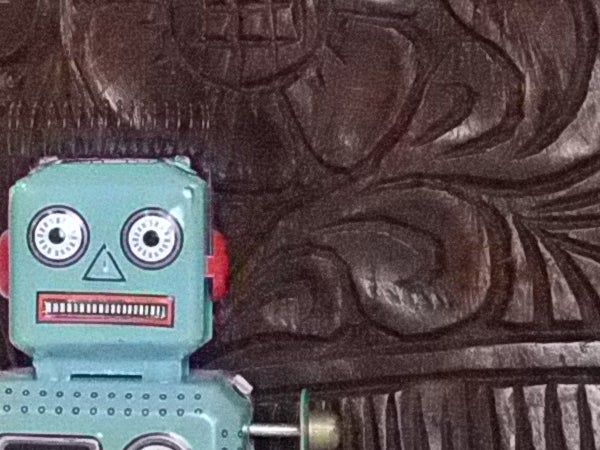 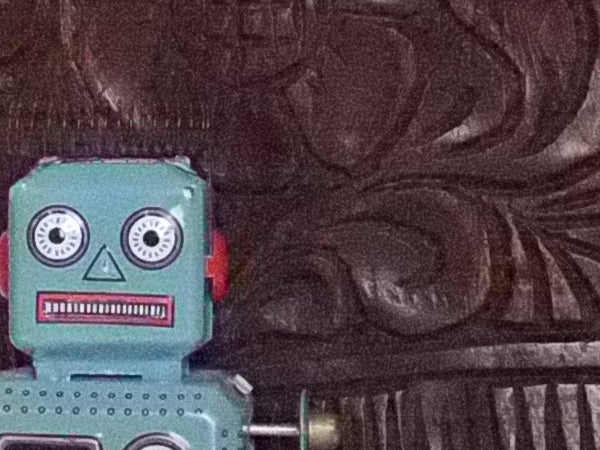 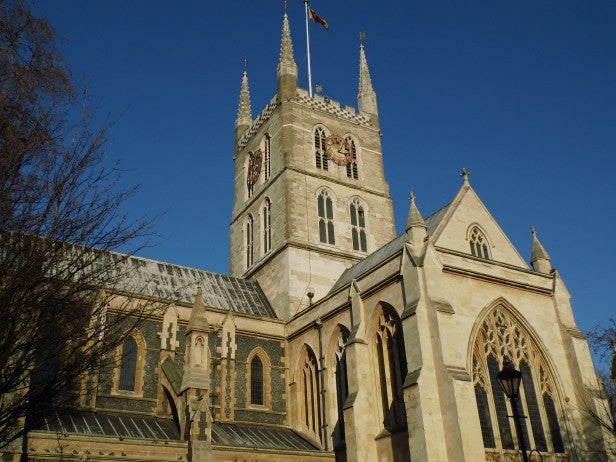 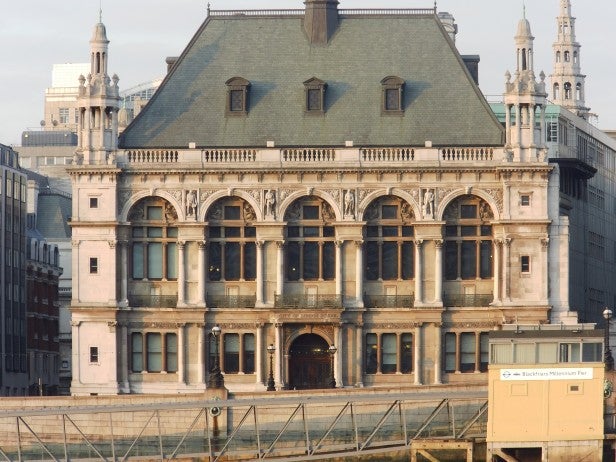 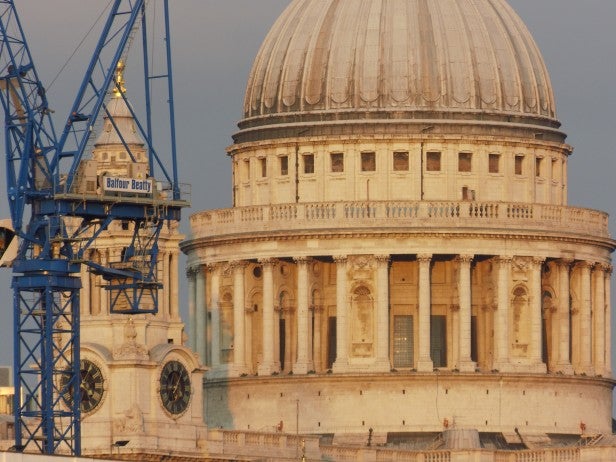 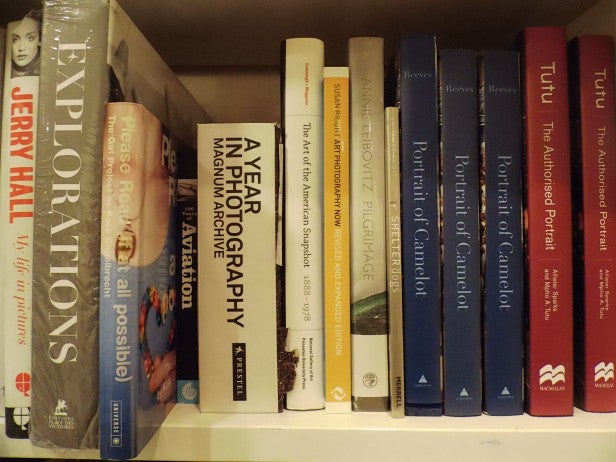 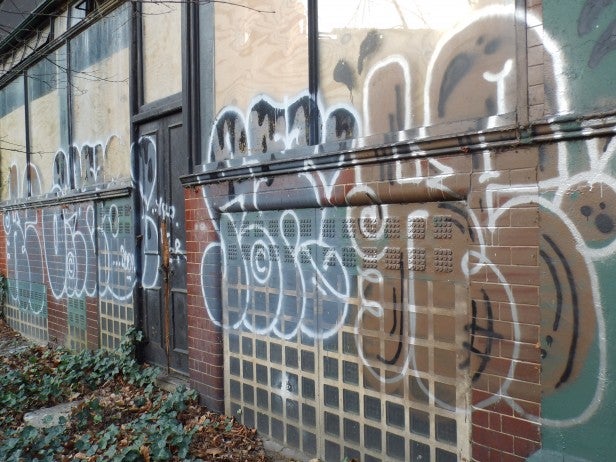 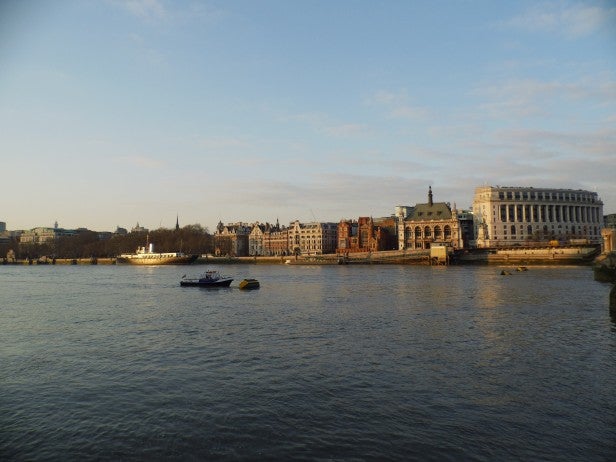 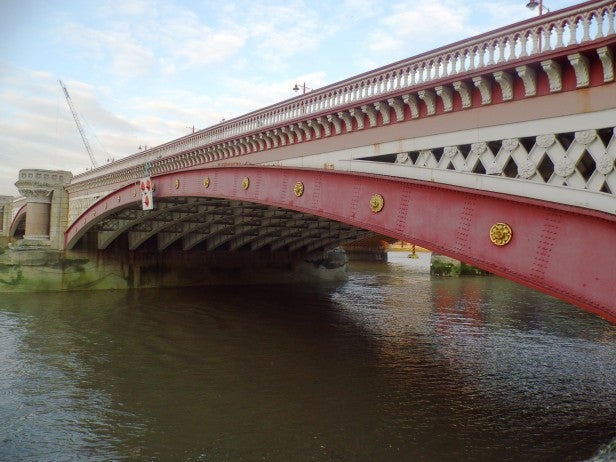