There’s no doubt that widescreen has become the preferred aspect ratio for TVs, driven primarily by the introduction of anamorphic DVD movies a few years back. With the subsequent introduction of widescreen TV broadcasts, it’s unlikely that anyone will be buying a 4:3 TV set again. However, the move to widescreen on the desktop is still lagging behind somewhat. That’s not to say that a widescreen aspect ratio is unusual in a computer environment – after all, I’m seeing more notebooks with widescreen displays than not these days. But the transition from standard 4:3 aspect ratio (yes I know that 1,280 x 1,024 isn’t actually 4:3) on desktop monitors has been a slow process.


Despite the relatively conservative uptake of widescreen desktop screens, we have seen an increase in widescreen support in games, with Valve’s Source engine being the best example. If you’re running a Source based game like Half-Life 2, Counter Strike: Source or Day of Defeat: Source, you’re treated to a multitude of resolution settings employing 4:3, 16:9 and 16:10 aspect ratios. 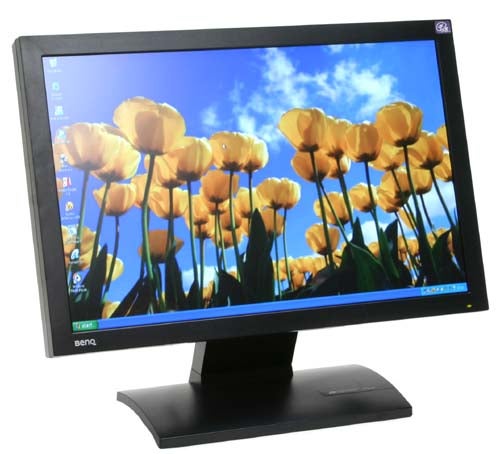 Now, I have looked at a few widescreen desktop displays in the past, including some very impressive 23in models with 1,900 x 1,200 native resolution, but even though these screens were fantastic for Windows work, hardcore gamers would probably have been put off by the relatively high response times. It’s also worth remembering that it’s only recently that we’ve seen graphics cards that could drive a modern 3D game at a 1,920 x 1,200 resolution.


Enter the BenQ FP202W – a screen that tries to address both the above issues and provide high-quality, widescreen gaming for the masses. BenQ claims that the FP202W is the first 20in widescreen monitor with a response time of 8ms and I’m not going to argue with that having failed to find a similar screen on sale. With a native resolution of 1,680 x 1,050, you’re actually getting slightly less desktop real estate than you would on a standard 20in display, which would run 1,600 x 1,200. But even so I find playing a game in a widescreen resolution a more immersive experience, while I even prefer running my Windows desktop widescreen. Using a widescreen aspect ratio allows you to have two documents side by side, which is very useful in my line of work.


The FP202W looks good in a minimalist kind of way. Both the stand and bezel are finished in the same matt, black plastic, which makes the image on the screen stand out that bit more. The bezel is reasonably slim at 2cm, but not the slimmest I’ve seen. There’s a small BenQ badge in the bottom left corner of the bezel, while a single power LED populates the bottom right. All the monitor controls are on the right hand side of the screen chassis, giving the front of the monitor a clean and sleek look.

Now, having no buttons on the front of the monitor does make it look good, but it brings with it a new set of problems. Although this isn’t the first time I’ve looked at a screen with the controls mounted on the side, there are usually labels on the front telling you what each button does. However, BenQ has put all the labelling on the side, along with the buttons, which means that you have to crane your head around to the side of the screen every time you want to adjust anything. I guess if you’ve got a very good memory and an uncanny sense of touch you could manipulate the controls without having to peer around the side, but I’m afraid I wasn’t up to such feats.


There’s the usual array of controls on offer – along with the power button you’ll find the menu/enter button, up, down, exit, input select, luminance presets and an info button. The luminance preset button is pretty handy and cycles between Standard, Movie 1, Movie 2 and Photo settings – although I would have thought it would make more sense to have lost one of the Movie settings in favour of a gaming setting. I also noticed that BenQ has done away with the normal colour temperature settings of 9300 and 6500, in favour of Bluish and Reddish. At first I found this quite bizarre, but to be honest it probably makes a lot more sense to most users than Kelvin levels. 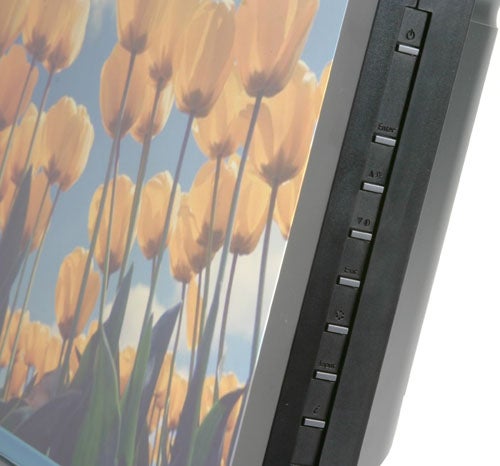 Despite the clean lines and stylish look of the FP202W, the range of adjustment is very limited. There is no height adjustment, no panning and definitely no pivot feature. In fact, the only adjustment it will manage is tilting forwards and backwards. It’s the lack of height adjustment that I find most disappointing, since when you’re settling down to play a game, you really want to get that viewing angle perfect.


Talking of gaming, the FP202W is a joy to use when you fire up your favourite game. I’m not a big advocate of the “response time is everything” myth, but playing a fast moving first person shooter on this screen is very impressive. One thing that BenQ has definitely done right is that it hasn’t sacrificed quality in order to achieve a low response time – while some manufacturers have resorted to 6-bit panels to get the response time as low as possible, the FP202W uses an 8-bit panel, producing the full 16.7 million colours.

The FP202W is also first rate when it comes to watching video and to put it through its paces I sat back and viewed a variety of high definition content, all of which looked stunning. However, the 1,680 x 1,050 resolution means that the FP202W doesn’t have quite enough lines to watch 1080 HD video, which is a bit of a shame.


Connection wise, you get a single DVI-D port and an analogue D-SUB port at the rear, along with a standard kettle plug power socket. Unfortunately the DVI port isn’t labelled as being HDCP compliant, but that doesn’t necessarily mean that it isn’t. I’m waiting for confirmation of this from BenQ on this one. On the plus side, BenQ has been thoughtful enough to include both DVI and D-SUB cables in the box. 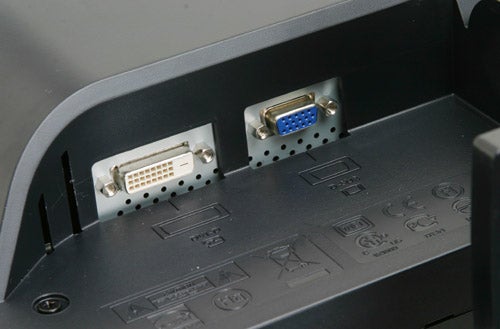 When it comes to price things get a bit tricky – you see this monitor is so new that I can’t find a single retailer selling it yet. So the only price I have is the RRP at £452 including VAT, which seems a little steep when you consider that you can buy a Dell 2005FPW 20in widescreen LCD monitor for only £356 right now. Of course the Dell uses a 16ms panel, but it does have height adjustment, panning, tilting and pivoting functions. So the question you need to ask yourself is whether that 8ms response time is worth an extra £100.


To be fair though, I would expect to see the FP202W at a street price of around £400 when online retailers start to stock it, and if you take the Dell out of the equation, this pricing is pretty average for the breed. Also I haven’t seen the Dell in the flesh, but if it’s anywhere near as good as the Dell 2405FPW 24in model I doubt I’d be disappointed.


The FP202W is an impressive screen for gamers, while maintaining 8-bit colour support for image editing and other colour sensitive work. Unfortunately, if you can live without having such a low response rate, there are cheaper and better featured 20in widescreen monitors available.