I’ve reviewed several BenQ digital cameras over the past couple of years, and on the whole I’ve been pretty impressed with them. BenQ’s range is fairly small when compared to the major brands, with just ten models ranging from seven to ten megapixels, including ultra-slim cameras with some fairly advanced features and more basic point-and-shoot models running on AA batteries. Today’s camera is in this latter category. The DC C850 is a budget-priced 8.0-megapixel camera with a 3x zoom lens, 2.7-inch monitor and two AA batteries. 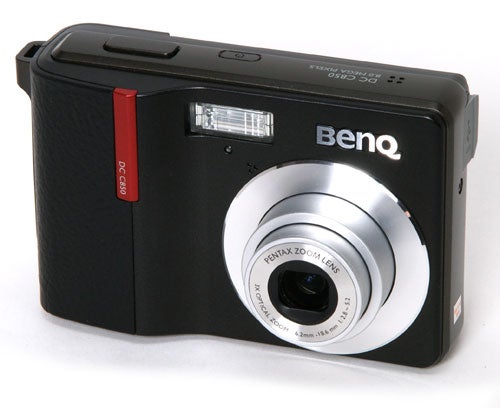 The C850 is going on sale with a recommended price of £79.99, although the street price is more likely to be around £69, which is remarkably cheap by any standard. At that kind of price it doesn’t have much competition, or at least not much worth worrying about. There’s the horrible Nikon L14, which even at around £70 isn’t worth buying. The aging 6-megapixel Panasonic LZ5 is still just about available for around £80, and Olympus has its entry-level 7-megapixel FE-210 at around £70, but the closest match is probably the Pentax Optio E40 which is widely available for around £80. There are a lot of similarities between the C850 and the E40, in particular the lens, which is – as far as I can tell – identical.


The C850 is superficially similar to the DC C1050 that I reviewed in January, but there are a number of important differences. While the shape of the body is almost identical, the C850 is made entirely of plastic. The overall build quality is good though, with no embarrassing creaks when squeezed. Measuring 93.4 x 62.2 x 33 mm it is slightly larger than the C1050, but it is still far from bulky. It only weighs 190g including two standard alkaline batteries, so it’s light enough to travel in a coat pocket. 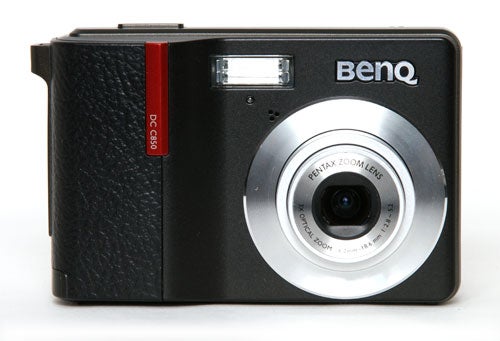 The handgrip on the right, which holds the batteries and memory card, has a comfortable textured vinyl surface which extends around to the back of the body, and makes the camera quite comfortable and pleasant to hold. However the back panel has a more rounded shape than the C1050, and lacks the raised thumb-grip area of that model. This, along with the larger monitor screen and different button positions means that there’s nowhere to rest your thumb without accidentally pressing the playback or menu button, which is a bit annoying. Other than this inconvenience though the control layout is very simple and straightforward, with just four buttons, a square D-pad and a rocker switch zoom control. The silver-on-silver indented labels are a bit hard to see in low light, but once you know which button is which this shouldn’t be a problem.

The main features of the C850 are its 3x zoom Pentax lens and its 2.7-inch high-res monitor. The lens has a zoom range equivalent to approximately 35-105mm, which is about average for a camera of this type. It folds flush with the body and only extends about 15mm at full stretch, so it’s pretty unobtrusive. As I mentioned earlier, it appears to be the same lens as found on the Pentax Optio E40, which is no bad thing. 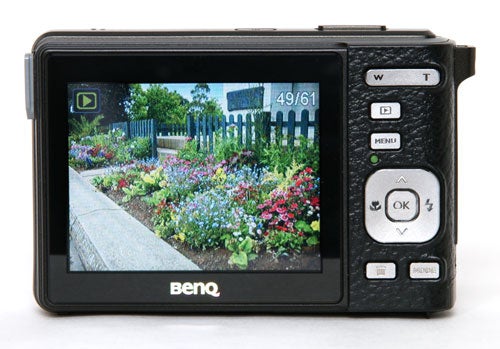 The monitor screen is 2.7 inches with a resolution of 230k dots, which is better than average. However it does have a few drawbacks, the main one being its relatively restricted viewing angle, which is no more than 45 degrees in any direction. It isn’t terribly bright either, which combined with the highly reflective surface makes it very difficult to see in bright sunlight.


Apart from these features the C850 doesn’t really offer anything beyond the usual point-and-shoot options found on the majority of compact cameras. It has three metering modes (centre-weighted, spot or multi-zone), auto bracketing and adjustable sharpness, but that’s about it. There are some optional colour filter modes, but the menu page for these appears to be broken and only monochrome, sepia and red can be selected. It has face detection, but then so does almost everything these days. It also has the latest must-have feature, smile-detection, which waits until the subject is smiling before taking the picture. It seems to work well enough with well-lit subjects relatively close to the camera, but like most such systems it is easily confused. 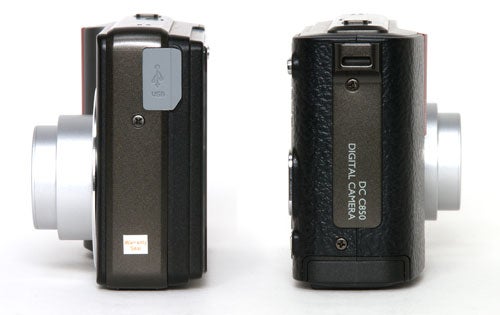 The camera has a basic Program auto mode and a range of 15 other scene modes covering all the usual situations. There is a mode called “Shake-Free”, but this just boosts the ISO setting to its maximum of 1600, with all the image noise problems this usually entails, so it’s best avoided.

The C850’s overall performance is surprisingly good for a budget camera. It starts up in a little over two seconds and shuts down again almost as quickly. In single shot mode at the highest quality setting it can shoot at a sustained 1.5 seconds per shot, which is pretty good for a cheap camera, however when shooting at higher ISO settings it takes progressively longer, showing a “Busy…” message for several seconds while it processes the image. Continuous mode is also quite impressive, managing to sustain well over a frame a second. However the camera doesn’t focus between shots, so it’s lees useful for moving subjects.

One concern with AA-powered cameras is battery life. The C850 was supplied with a set of standard Panasonic industrial alkaline batteries, as are many AA-powered cameras. Normally these will last for the entire testing period, but the camera’s battery level monitor indicated that they were exhausted after only a few dozen shots. I tested the batteries with a separate meter and found that they were still OK, but as far as the camera was concerned they were drained. This may just be a reaction to that type of battery, because when I switched to NiMH rechargeables the camera worked perfectly well for another 50 or so shots with the charge meter reading full.


The C850’s major weak point is its AF system, and it really is very poor indeed. With a well-lit high-contrast target it is fine, and focuses quickly and accurately. However I found that even a slight lack of texture was enough to confound it, even in good light. Its low light performance is exceptionally poor, failing to focus at all in a room lit brightly enough for reading, and since it lack and AF assist lamp


Unfortunately the final image quality isn’t too good either. Exposure metering is somewhat erratic, and the multi-zone metering seems to heavily favour the centre zone. Colour rendition is also poor, with highly saturated reds and especially yellows turning out as featureless blobs of colour. Image noise is also a problem, with some noise effects visible even at the lowest ISO setting, and getting progressively worse. Automatic white balance under artificial light was also very inaccurate, with strong colour casts in both tungsten and fluorescent illumination. This is a pity, because the lens actually performs very well, with good edge-to-edge sharpness and minimal distortion or chromatic aberration. 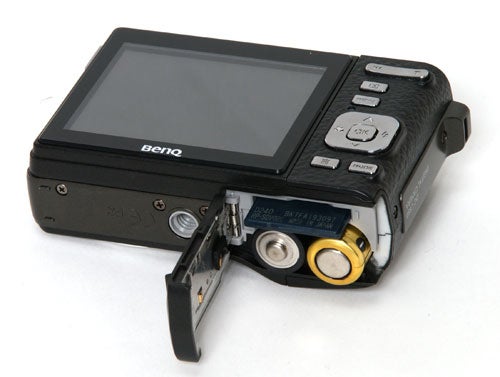 Some BenQ cameras are outstanding value for money, but sadly the DC C850 isn’t one of them. It starts off well with the promise of superior optics, good build quality and decent performance at a rock-bottom price, but it is let down by a very poor AF system and inferior image processing. It may be very cheap, but for just a few pounds more you can get a much better camera, including some other BenQ models. 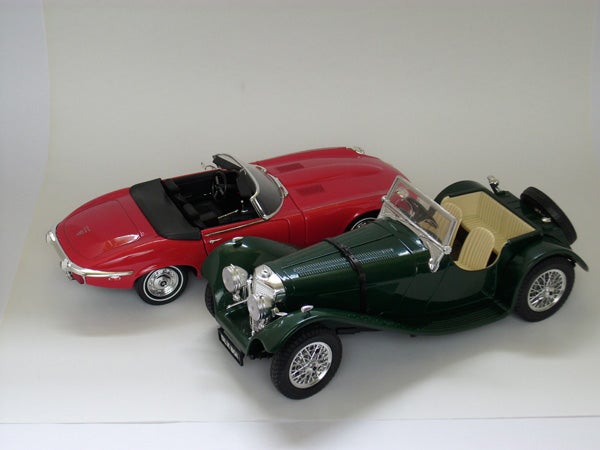 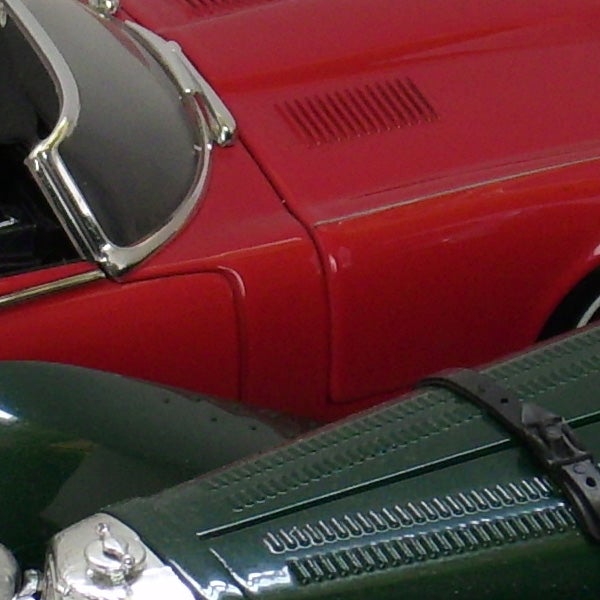 Even at 50 ISO there is some colour mottling visible in the darker areas, but the level of fine detail is pretty good. 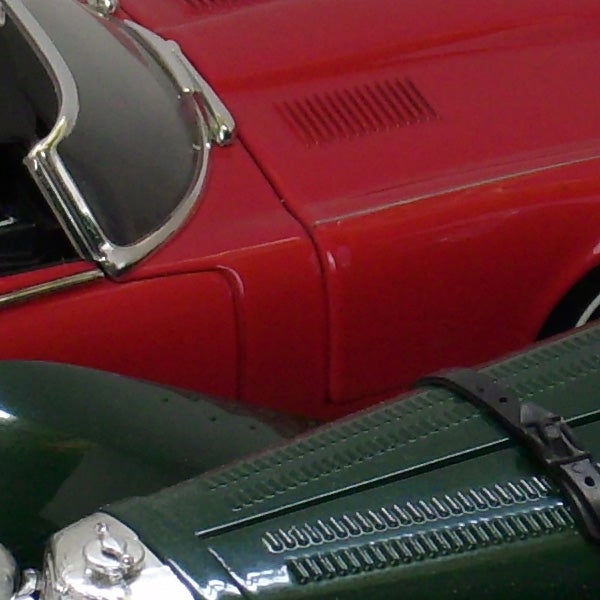 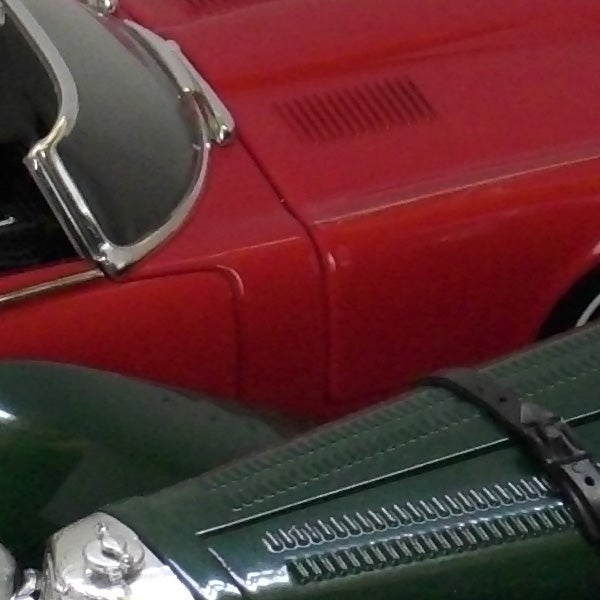 At 200 ISO the noise reduction is blurring out the fine detail. 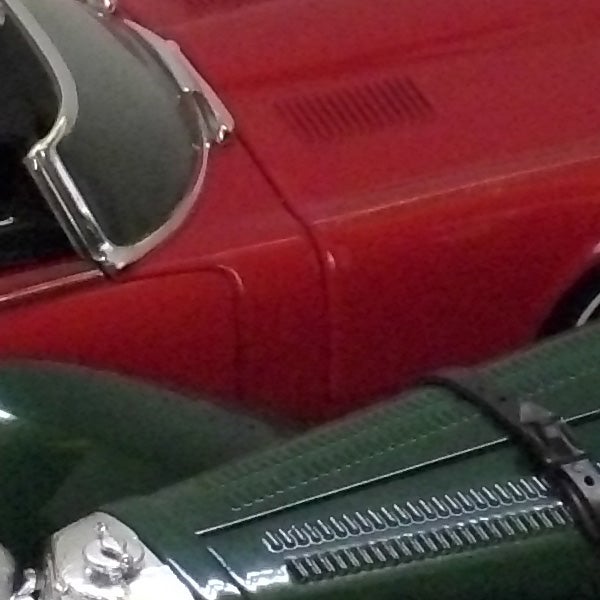 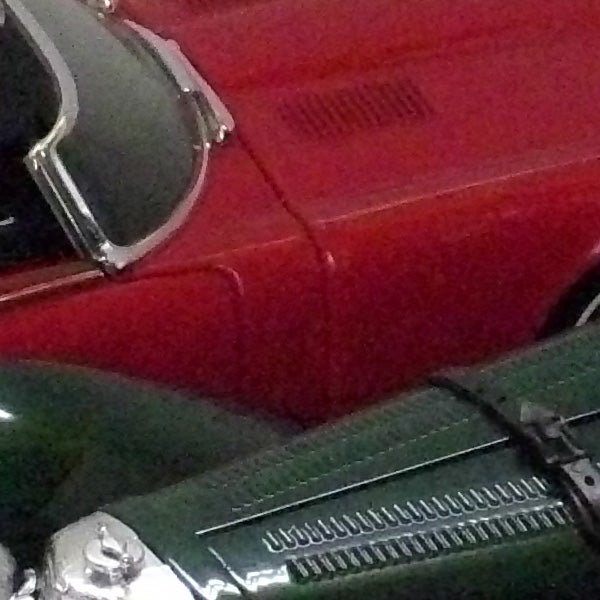 Both noise effects and detail blurring at 800 ISO. 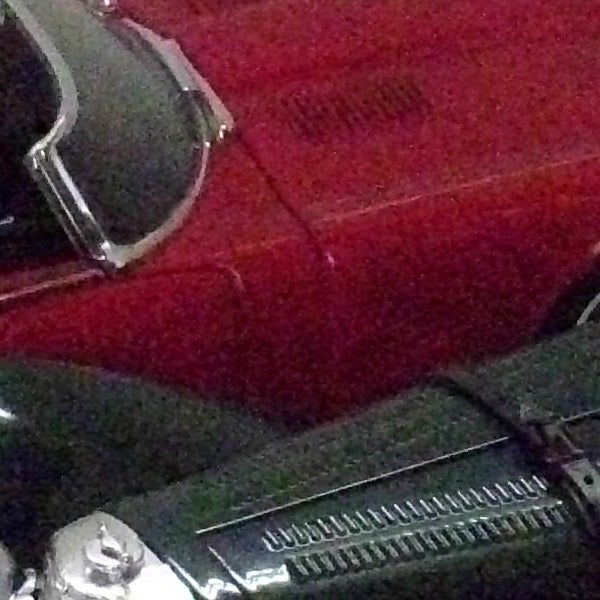 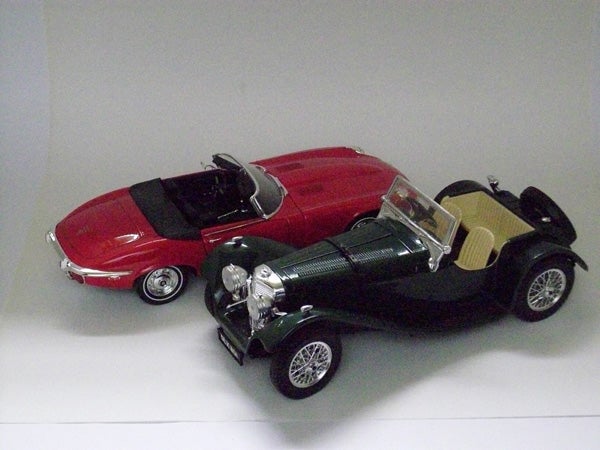 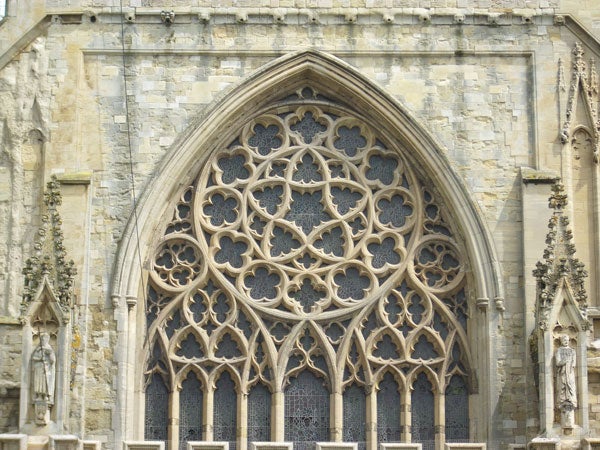 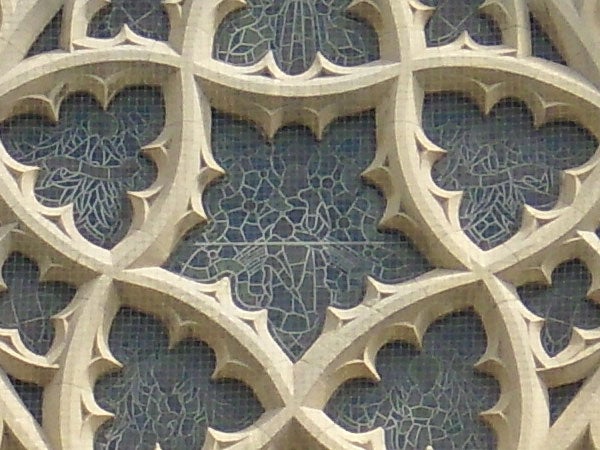 The level of detail is very good for such a cheap camera, mainly thanks to the Pentax lens. 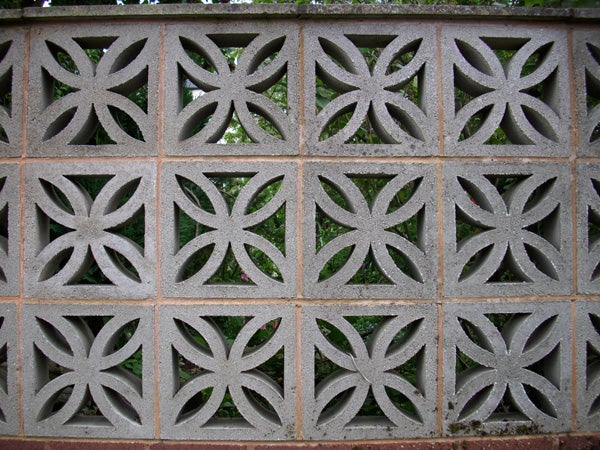 There is some barrel distortion at wide-angle, but I’ve seen a lot worse. 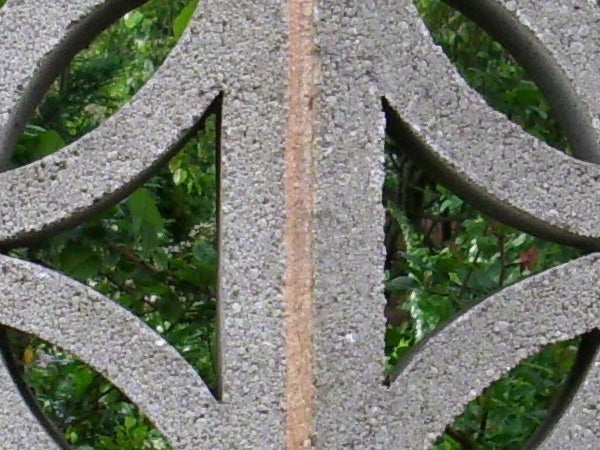 Centre sharpness is excellent for a budget compact. 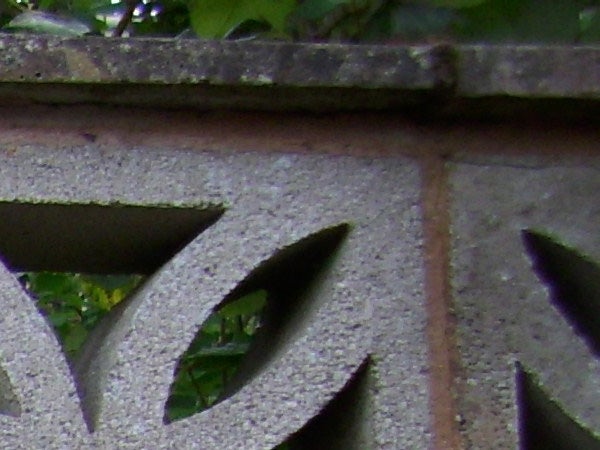 Only in the very corners of the frame is there any sign of blurring and chromatic aberration. 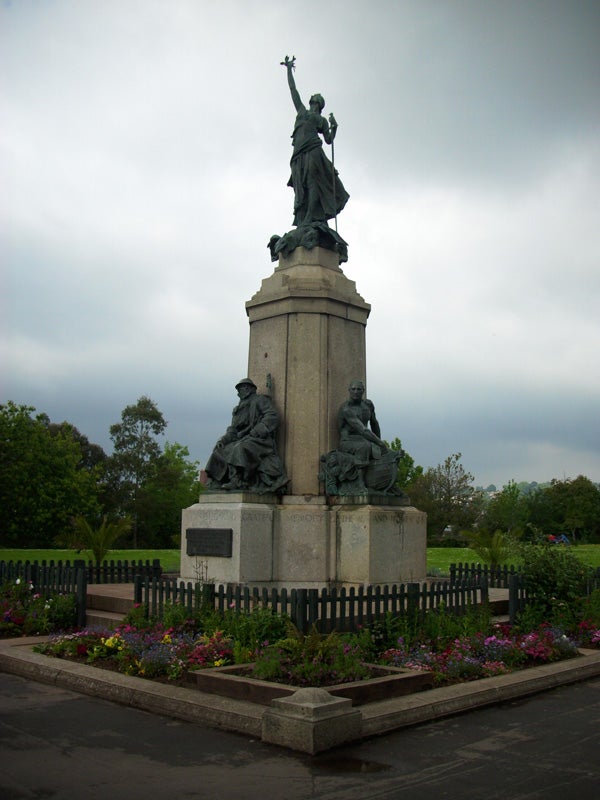 The AF system had a hard time focusing on this statue, despite the fairly bright daylight. There is also slight darkening in the corners of the frame. 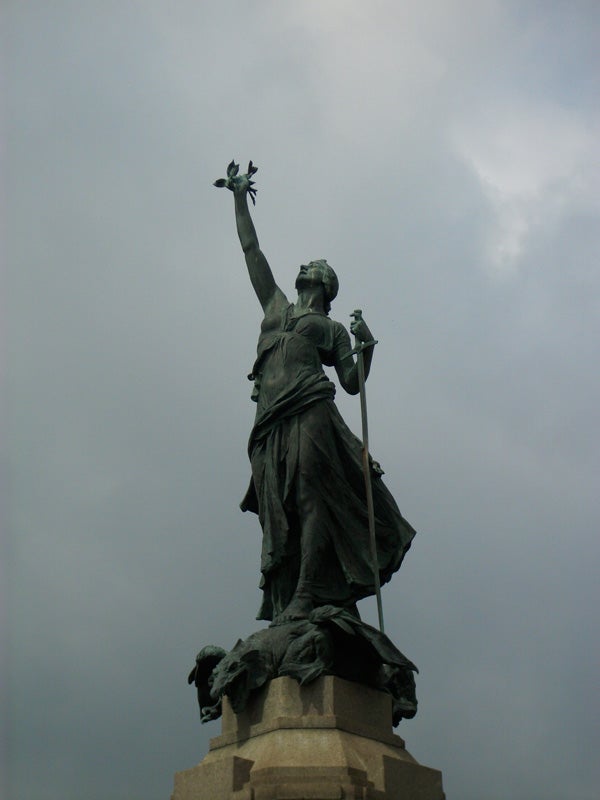 Again the AF system found it hard to focus on this. The zoom range is approximately 35-105mm. 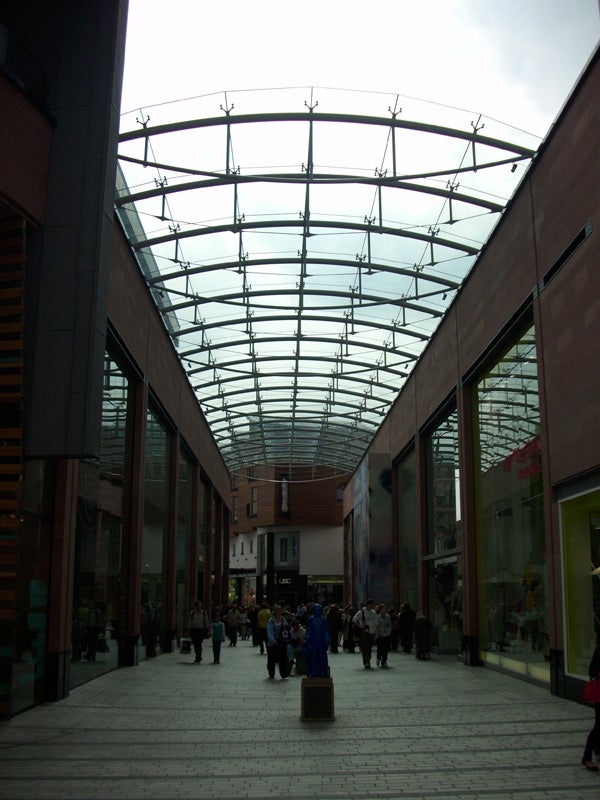 Dynamic range isn’t too bad, but the white balance on this shot is way off, and also it is slightly under-exposed. 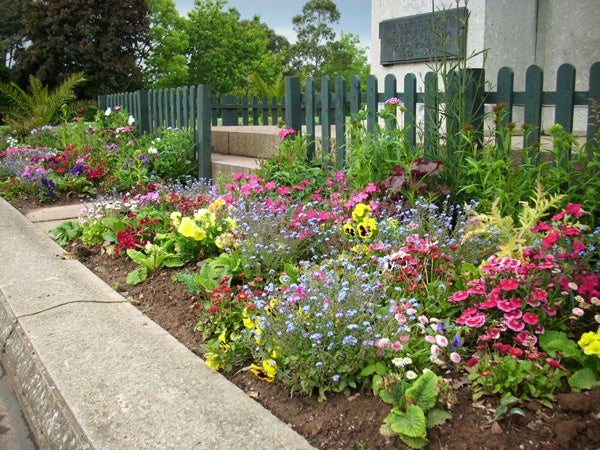 The bright yellow and red flowers are over-saturated and lacking in detail.