There are basically three ways that digital cameras are made. Some are made almost entirely by one manufacturer using a majority of its own components. Others are assembled by the brand manufacturer from components made by a variety of other manufacturers. The third and most common way is to go to a large Chinese electronics company, select a ready-made model from their extensive range, and put your own brand label on it.


This method is used by several well-known camera brands for some of their lower-end models, but is also used by companies with no camera manufacturing capability of their own who nonetheless want a piece of the lucrative digital camera market. There are three or four large Chinese digital camera manufacturers, and between them they make the majority of the camera models that we know by the common brand names under which they are sold. 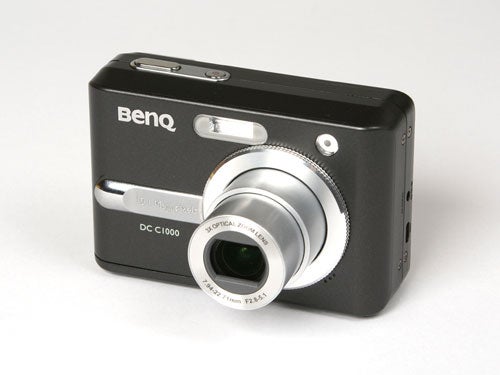 This is by no means a bad thing. Not too long ago, Chinese imports were synonymous with sub-standard cameras with lousy performance, shoddy construction and poor picture quality. However over the past couple of years, no doubt spurred on by the demands of the brands that they supply, they have come on in leaps and bounds, and now offer models that can compete on equal terms with some of the best that the big-brand Japanese manufacturers can offer.


Take this BenQ DC C1000 for example. The BenQ brand is best known for its range of computing-related products such as scanners, DVD drives, laptops and particularly digital projectors, most of which are very good and are generally excellent value for money. It also sells a range of digital cameras made by one of those nameless Chinese exporters and sold under the BenQ brand name. 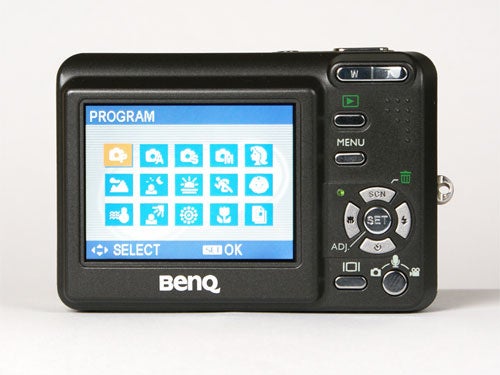 The DC C1000 is its latest model, and it’s quite a beast. In line with current market trends it has a 10.1-megapixel CCD, a 3x optical zoom lens, 2.5in LCD screen and a range of manual exposure options and programmed scene modes that will tempt any keen photographer. It is well made, attractively designed, and has a list price of just £189.99, which compares favourably with the likes of the Casio EX-Z1000 (£242).


I have to admit that I was initially surprised by just how good this camera is. Despite what I said earlier, I will admit that I still have lower expectations of Chinese export cameras. However the DC C1000 has a lot to recommend it.

The initial impression is of a solidly made and nicely designed camera. The body is half metal and half plastic, and finished in a nice matt black with chrome details. Overall build quality is excellent, with no embarrassing creaks or groans when squeezed. It is quite chunky compared to some more expensive models, and weighs in at a not insubstantial 140g without batteries. It runs on 2x AA’s, so add a couple of Duracells and that weight will go up to a hefty 190g. 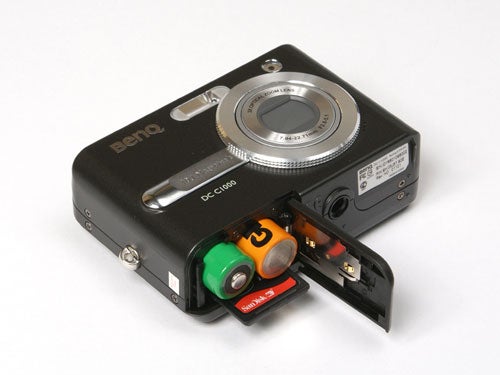 The control layout is sensible, making the most of the limited amount of space on the back panel. I found that I kept accidentally pressing the scene mode button with my thumb while shooting, but then I have enormous hands so this won’t be a problem for everyone.


The control interface is a little complex, but not too confusing once you get used to it. The main menu is only used for setting things like picture quality and metering mode. Other frequently used functions such as white balance, exposure compensation and ISO setting are controlled via the ‘Set’ button in the middle of the D-pad, while the 15 scene modes and manual settings are activated via the up button on the D-pad. The scene modes include all the usual suspects, such as portrait, landscape, night scene, sunsets, sports etc. 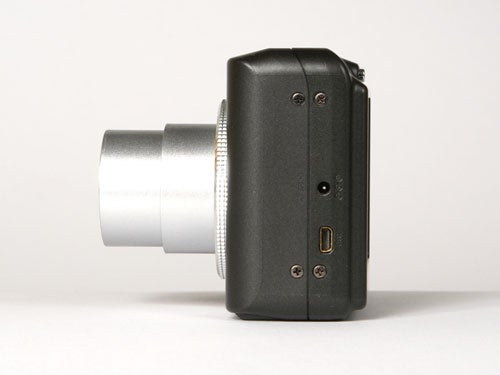 Unusually for a snapshot compact, the DC C1000 offers manual exposure control, including aperture priority, shutter priority and full manual. The lens has an aperture range of f2.8 to f6.4 at wide angle, or f5.2 to f11.6 at telephoto, which while a bit slow over most of the zoom range is nonetheless quite a respectable aperture range for a camera of this size. In aperture priority or manual modes the aperture can be altered in 1/3-stop increments. The manual shutter range is eight seconds to 1/2000th of a second in ½-stop increments, again not too shabby and quite useful for creative photography.


Overall performance is quite good, but with a few exceptions. The camera starts up in just under four seconds, which is a touch on the slow side by today’s standards, but not at all bad. 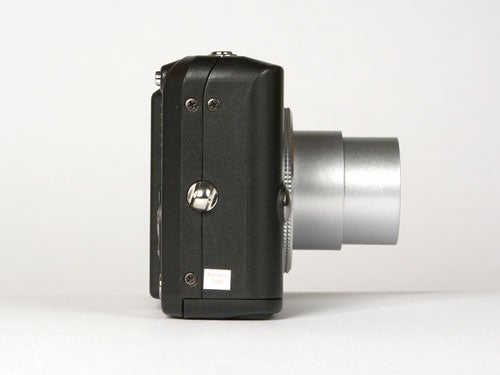 In single-shot mode it has a shot-to-shot time of about three seconds which pretty good, however the continuous shooting mode lets it down badly. It shoots four shots in about six seconds while you hold the shutter button down, but since the screen goes blank and there is no shutter sound, it’s impossible to tell when it’s taking a picture, or when it’s finished.

Focusing is also something of a weak point. It is quite slow, taking just over a second to focus in good light. In normal mode the closest focus distance is 80cm, which is rather a long way away. The macro mode is supposed to be 5cm, but I found that the camera had real problems locking on at this range. It seemed to work a lot better at about 10cm. 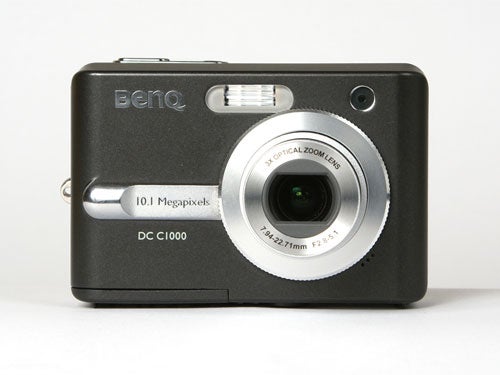 It also has major problems focusing in low light. In fact as I’m sitting here at a little after 5pm on a sunny afternoon with the curtains open, about half the room is apparently too dark for the DC-C1000 to focus. It has no AF illuminator lamp, so you can forget using it to take photos in most social settings. Which is probably a good thing since the flash is underpowered and doesn’t fully cover the frame at wide angle.


Fortunately the camera has several other strong points, including a good video mode capable of shooting VGA quality at 30 frames per second with audio. It records straight onto the SD card, with a 1GB card providing enough space for 17 minutes at full resolution.


In still mode, the highest quality setting produces JPEG files of roughly 4.5MB, so the same 1GB card is enough for 169 shots at maximum size and quality. This is actually a larger files size than the Casio Z1000, and slightly larger even than the files produced by the excellent Samsung NV10, so at least image compression shouldn’t be a problem. 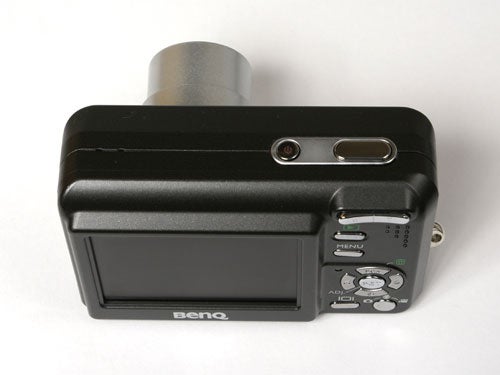 And indeed it isn’t. In fact picture quality is the DC C1000’s main strength and saving grace. It may lack the crisp sharpness of the NV10, but it has plenty of detail, good colour rendition and surprisingly little lens distortion. Since it has a maximum ISO setting of only 200, image noise isn’t really a problem either.


Exposure is also very good under most circumstances, however I found that the exposure system had an annoying habit of selecting a much smaller aperture than was really necessary, producing longer shutter times and consequently a lot of camera shake. It also lacked dynamic range, but then that is also a problem on several of the current 10.1MP cameras.


All in all though, the BenQ DC C1000 is a good camera for the money, and as long as you can put up with its limitations it will provide you with high quality photographs at a bargain price.


The BenQ DC C1000 is a well made and stylish camera, with acceptable performance and good picture quality at a bargain price. If you really have to have a 10MP compact camera and haven’t got a lot to spend on it, then it’s certainly worthy of serious consideration. 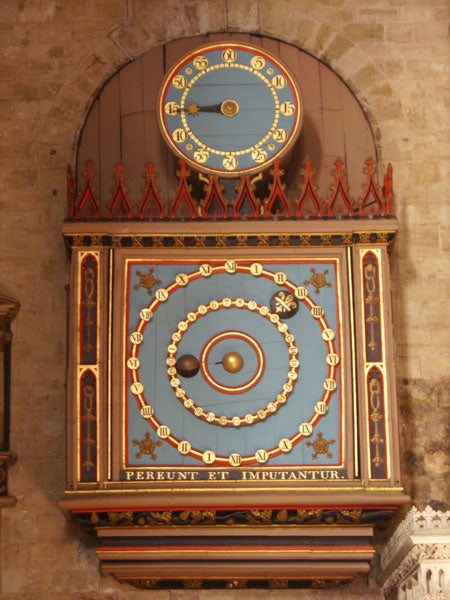 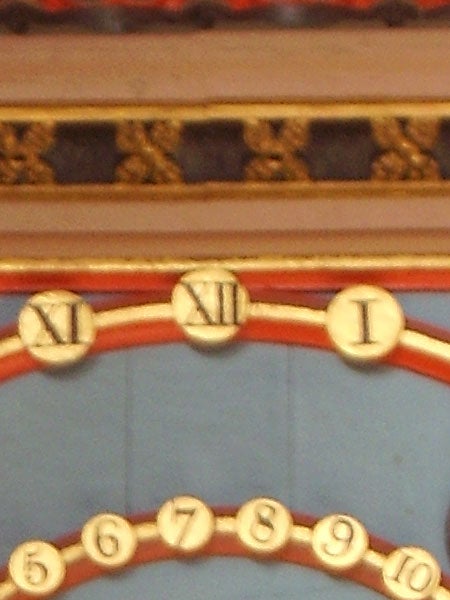 At the lowest ISO setting there is, unsurprisingly, no problem with image noise, but the narrow aperture means a long exposure time, producing some movement blur despite the tripod. 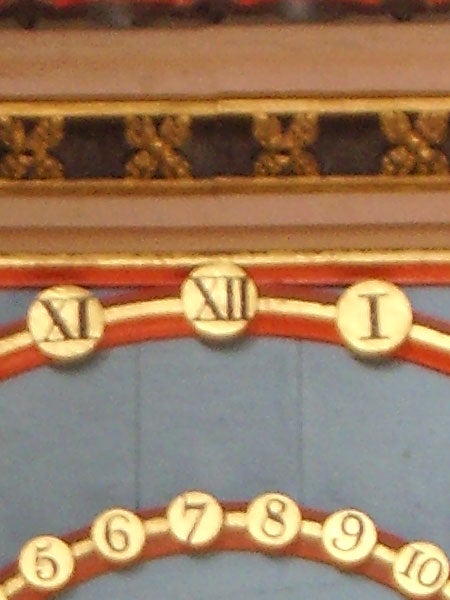 At 100 ISO there is still no image noise, although the shot lacks fine detail, suggesting that the noise reduction system is a little heavy-handed. 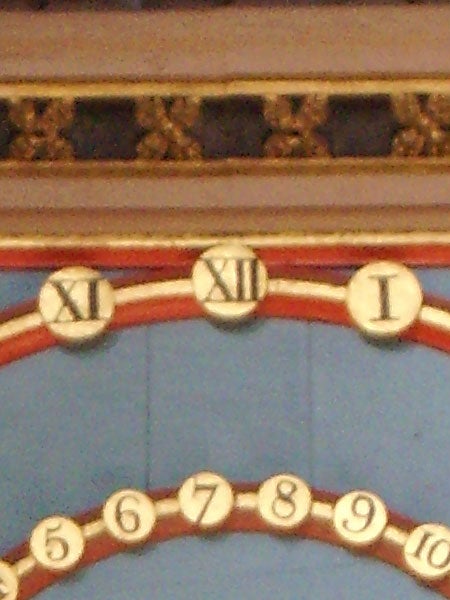 The highest ISO setting is only 200, but even so there is some slight image noise and colour speckling visible. 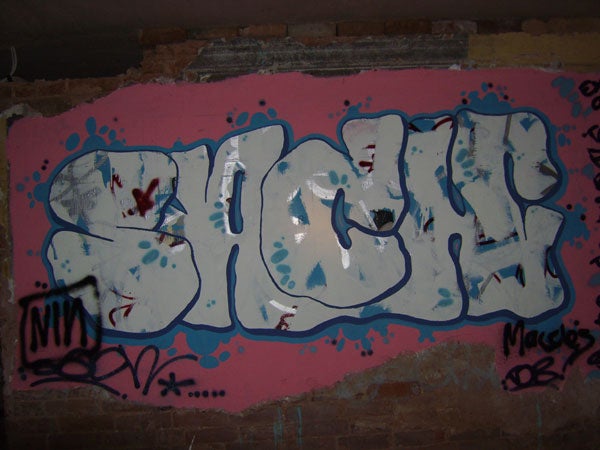 The DC C1000’s built-in flash is rather under-powered and doesn’t fill the frame properly at this wide angle setting. Compare this with the similar shot taken with the Samsung NV10. 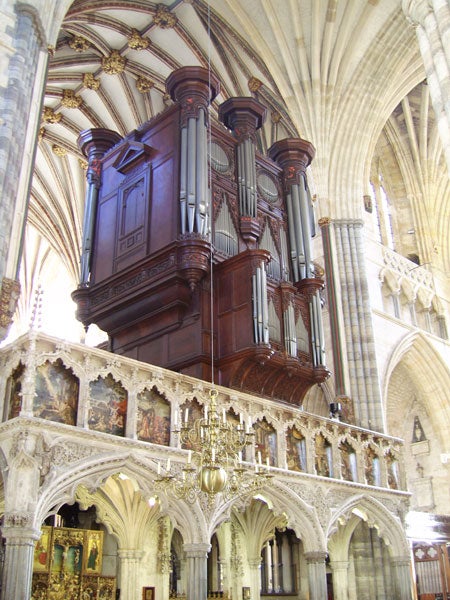 Everyone likes a big organ, and here’s the magnificent example from Exeter cathedral. The camera has done a good job of capturing all the intricate detail. 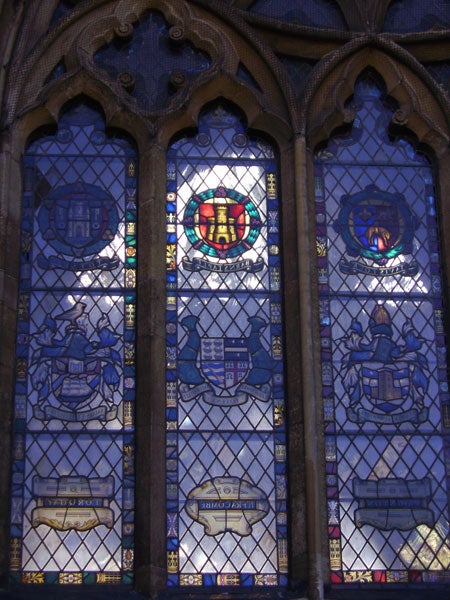 The DC C1000 does an excellent job of capturing the delicate colours of this stained-glass window. 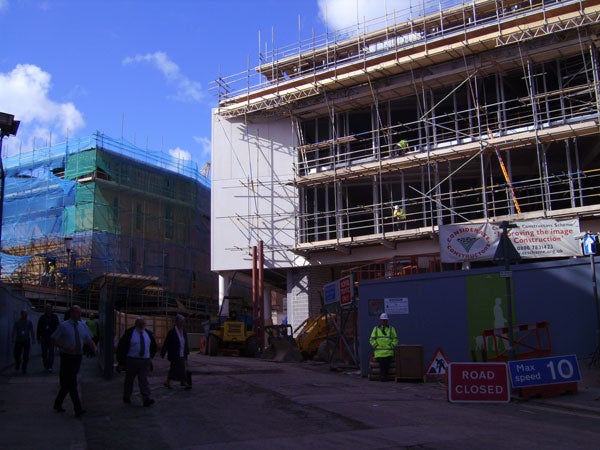 Although the exposure on this shot is accurate, the shadows are very dark, a sign of limited dynamic range. 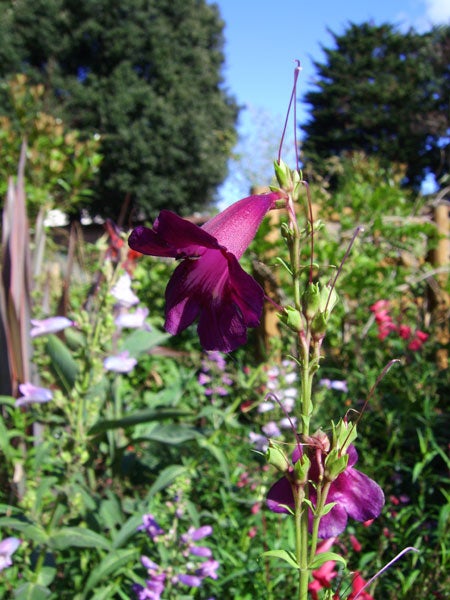 The stated macro range is 5cm, but it focuses a lot better at about 10cm. 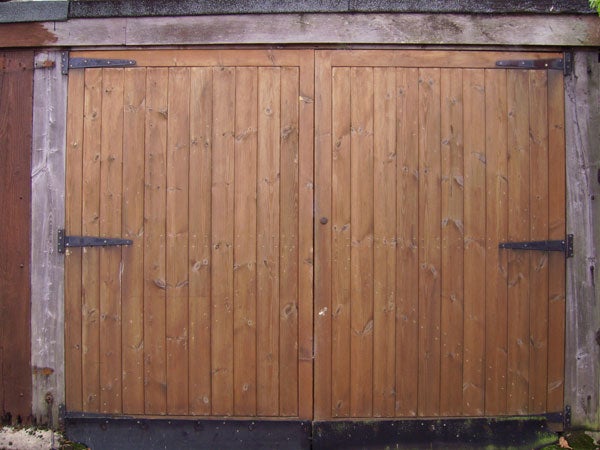 Despite its bargain price, the DC C1000 has a fairly good lens on it, producing little spherical distortion and good edge-to-edge sharpness. 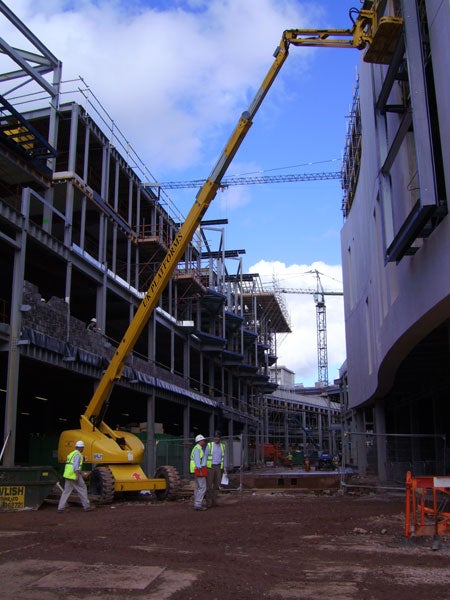 The wide-angle end of the zoom range is equivalent to about 35mm, wide enough for most situations. 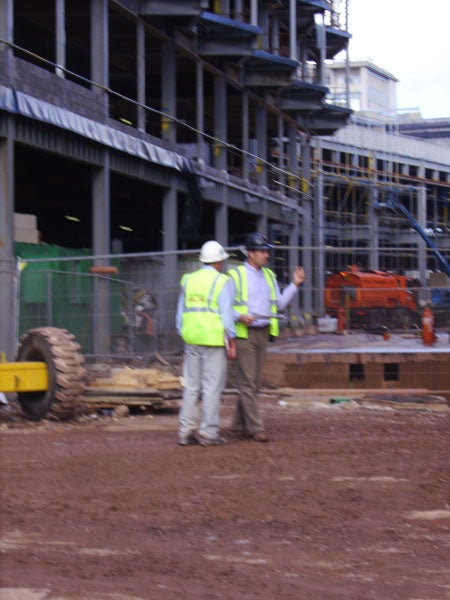 Taken from the same location, this shows the telephoto end of the zoom range, roughly 105mm equivalent. Unfortunately it also shows how slow the lens is at this setting, producing motion blur. 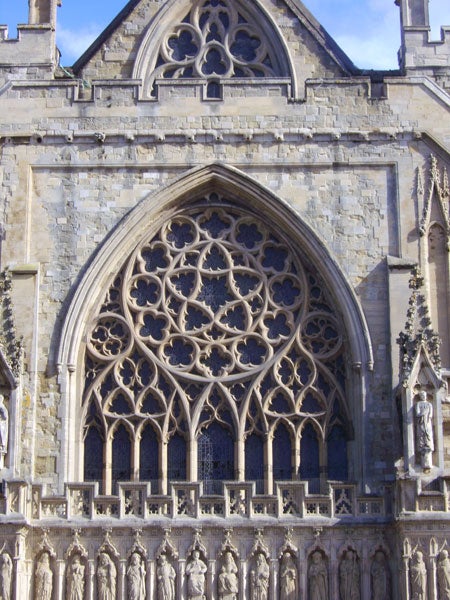 As usual, here’s a shot of the front of the cathedral. See the blow-up below to compare fine detail. 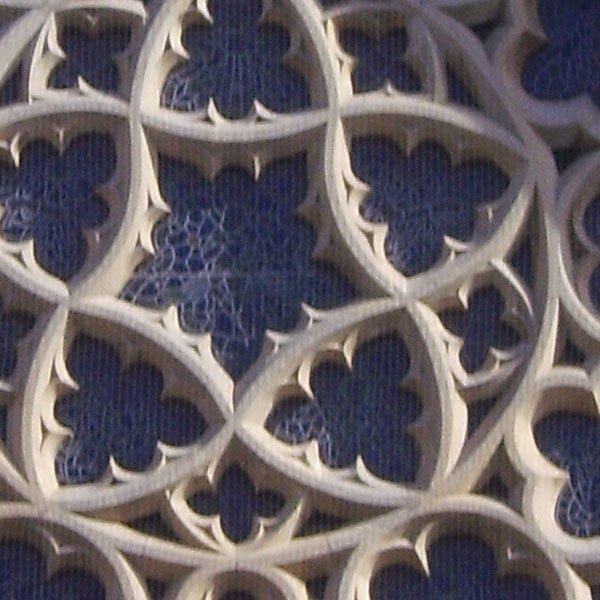 This 600×600 100% enlargement shows how the camera captures fine detail. Not too bad, but compare this with the similar shots I’ve taken with other cameras.