Are you hip to the nu-school? Totally radiculous? Do you know your Heelflip 360 from your No Comply? If these words make no sense to you, chances are you’re not going to need the Belkin SportCommand. You see, it’s really geared at outdoorsy-extreme-sportsy types who are likely to break iPods left right and centre through a combination of totally ditchin’ bails and/or alcohol-related tomfoolery. If you’re just listening to your iPod on the train, this isn’t going to be for you. Get back to your boring life, sucker. 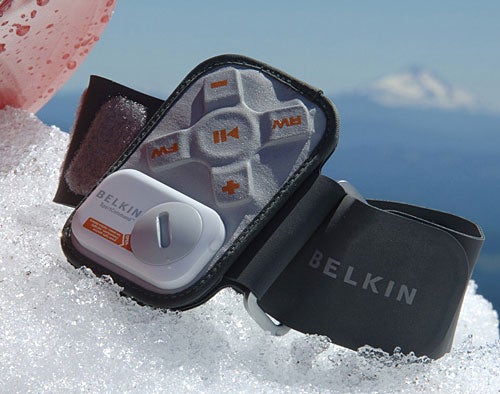 If, however, an average weekend for you consists of a lot of piste and even more pissed, you should seriously consider looking at this. What exactly is the SportCommand? Well, it’s a remote control for your iPod. A little white dongle attaches to the bottom of your iPod (anything with a 4th gen dock connector or beyond), and you can then tuck it away in your backpack or pocket, out of harm’s way. The main SportCommand ‘pad’ is a soft cloth pad which you can velcro-strap to your arm or thigh. You can use its big-button controls to easily change tracks and volume on your iPod, safe in the knowledge that any painful accidents resulting from your extreme skills won’t also result in a painful credit card bill. 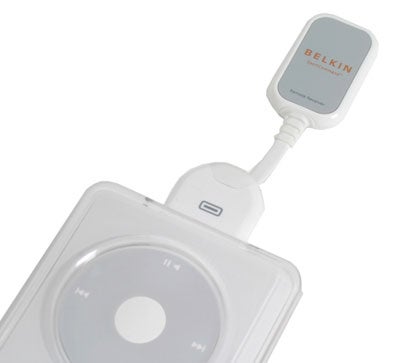 The main pad has five buttons on – track next/previous, volume up/down and a central play/pause button. You can’t do any complex iPod navigation here, so don’t expect to be filtering songs by genre with this thing. However, you can happily navigate through playlists and albums, skipping the ones you don’t like and turning the volume down when you want to hear what someone is trying to yell at you from across the slope.

Soft, flexible and cloth-esque, the SportCommand has suitably massive buttons for prodding at with glove-covered hands. We found that, wearing our winter gloves, operation was as expected. It’s water resistant, but not water proof. However, unless you enjoy your sports underwater, you’re going to be fine out in the snow or rain with this on. The white segment on the front is the battery / receiver unit, and this is, allegedly, more waterproof. We plunged it into water and found no ill effects, so must assume this to be the case. Unlike Apple’s own product, you can twist the front off and get at the battery, replacing it as you need to. Belkin doesn’t give a shelf-life for the product, but we’d expect to get a good year or so out of it before you need to think about changing the battery.


In the box you get a couple of Velcro loops – a small one that will keep it attached to smaller arms, and a second loop, which attaches to the first, to enable you to strap it around coated arms or legs. These hook in through metal loops on the back of the SportCommand and have super-secure Velcro – once you’ve attached it, this thing isn’t going anywhere. You also get a carabina for you to attach this to a belt or loop or some description. This looks a little lame, but will get the job done. 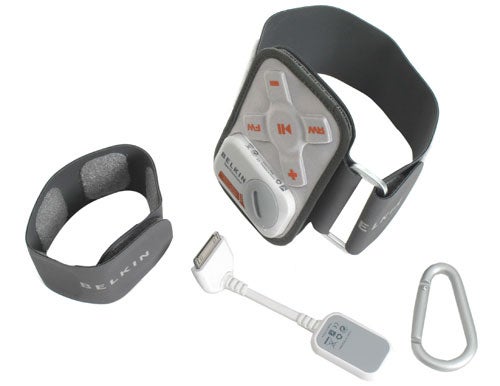 In practice, the SportCommand works just as you would expect. However, one has to question its point, on some level. You can’t do any complex navigation with it, meaning you have to set up a playlist of some sort to start with. Couldn’t you just set the volume on the iPod before you put it away, and avoid putting tracks you didn’t like in the playlist, meaning you didn’t have to skip? Since the iPod is the thing with the headphone connection, you have to make sure you have headphones with a cable long enough to run through to your backpack or wherever it is you decide to stow your iPod away, which can get awkward.


Then we come to value. £46 is simply too much for this product – heck, that’s not far off the cost of an iPod Shuffle, which can attach to your clothing and give you the same degree of control over your music, and which is verging on the disposable given the price differential. We all know that extreme sports gear is expensive, and I suspect that Belkin is thinking that this should be no different. But, when competing with products that simply mount your iPod on your arm, or even the possibility of just hitting play and tossing your iPod in your backpack, it’s really hard to justify this kind of price for the SportCommand. 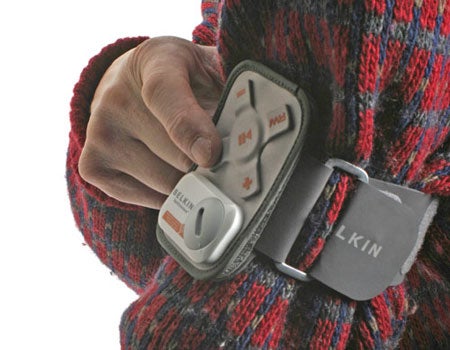 
Overall, the SportCommand is clearly a product that does what it says on the tin. If you immediately look at this and think – “Yes, finally!” – then you won’t be disappointed. However, it’s hard not to suggest that anyone hitting the slopes doesn’t save a few quid by cutting back on a a couple of beers and spend the extra on an iPod Shuffle instead.