The Beldray BEL0747 2-in-1 Cordless Steam Iron has a neat double-use design, but there are better irons on the market if you don't need this feature.

The Beldray BEL0747 2-in-1 Cordless Steam Iron can be used as a corded or cordless iron, offering up a level of flexibility not found with other models. You slip the cordless iron back into the stand for a quick five-second recharge while ironing to keep going. The iron has a large 300ml water tank, and an integrated anti-calcium filter to prevent limescale build-up, to ensure optimum performance.

The steam burst and water spray will remove stubborn creases and smooth heavy fabrics, while the anti-drip function prevents leaking. The vertical steaming option allows you to tackle curtains and hanging clothes, and there’s also a smooth ceramic soleplate and a self-clean function for removing impurities. Cheap build quality and the lack of a few features hold this iron back, however. 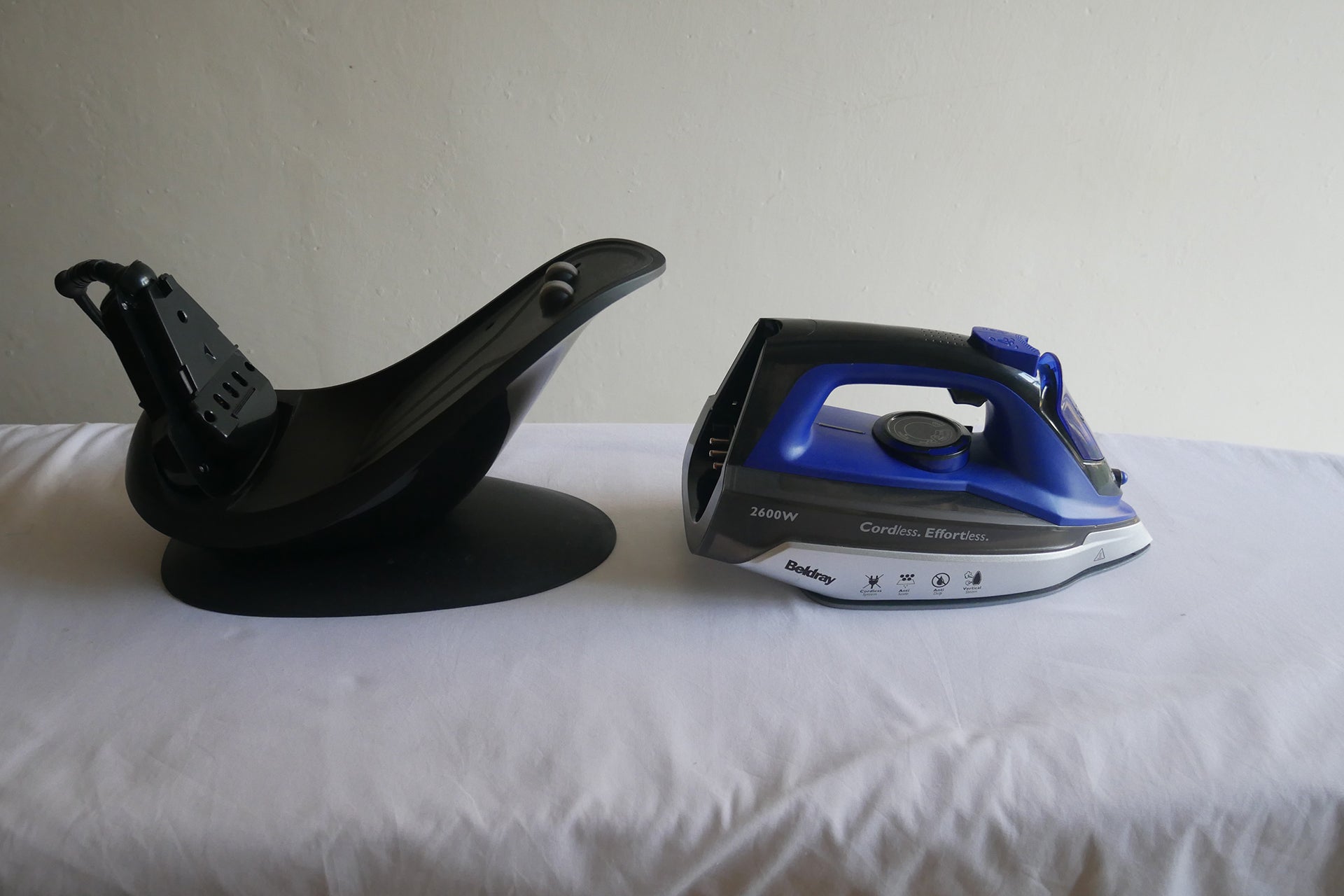 To fill the Beldray 2-in-1 Cordless, set the steam setting indicator – found in a little hollow on the top of the iron – to “0” by pressing the steam control trigger on the underside of the handle. Then place the iron on to its stand and open the water tank cap at the front of the iron. Fill, taking care not to go past the “max” mark. 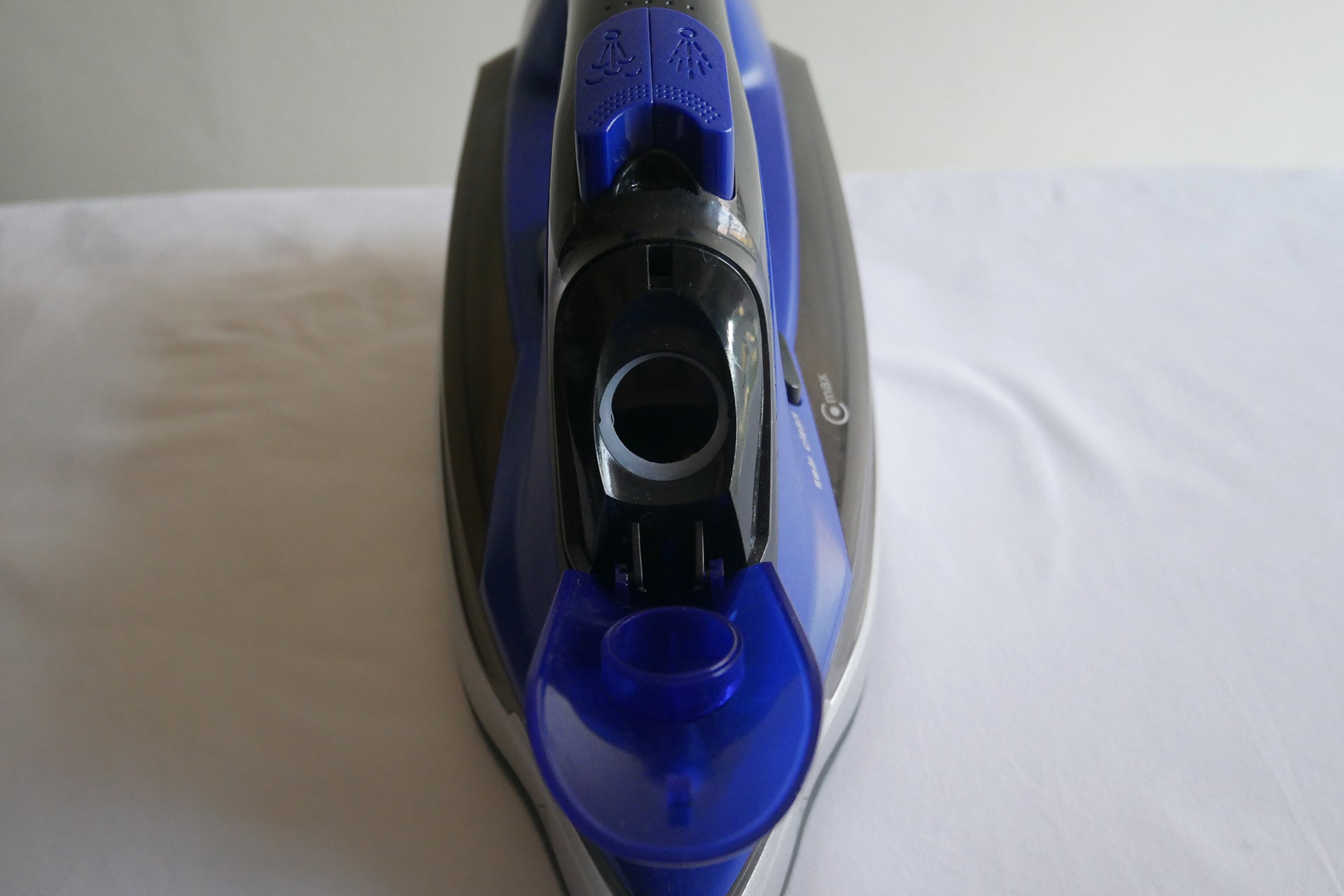 To increase the temperature of the iron, you turn the variable temperature control dial (under the handle). For ironing with steam you need to put the steam setting indicator on 1 or 2. The makers claim it’s best to use the iron as a corded one if you’re doing a lot of steam ironing. The iron will only produce steam on the three-dot “linen/cotton” setting.

To use the steam burst, press the Steam Burst button on the top of the iron, on the right-hand side. You need to wait five seconds between each burst to prevent water from leaking out through the steam holes.

To steam vertically, set the steam setting indicator to “0”, and the control dial to the hottest 3-dot “linen/cotton” setting. Hold the iron 15cm away from whatever you want to steam, and press the Steam Burst button. As mentioned, you should wait five seconds between each press. The water spray button is next to the Steam Burst button on the top-front of the iron. The spray comes out of a small nozzle above the tip of the iron.

The iron also has a resin anti-calcium filter built in to the water tank. This is permanently activated and doesn’t need replacing.

The self-clean function needs to be used at least every two weeks if you live in a hard-water area. To do this you switch off the iron, you first set the steam control indicator to “0”. Put the iron on its stand and fill the water tank. Next, switch the iron on, set the dial to the highest setting and wait until the temperature control light switches off.

The plastic stand upon which the Beldray 2-in-1 rests looks a little weird; it isn’t a design that everyone will warm to. However, the whole process of turning the iron from corded to cordless and back again works well, provided you ensure the iron is sitting very firmly back on its heel. The plastic switch on the rear of the stand is pretty stiff. 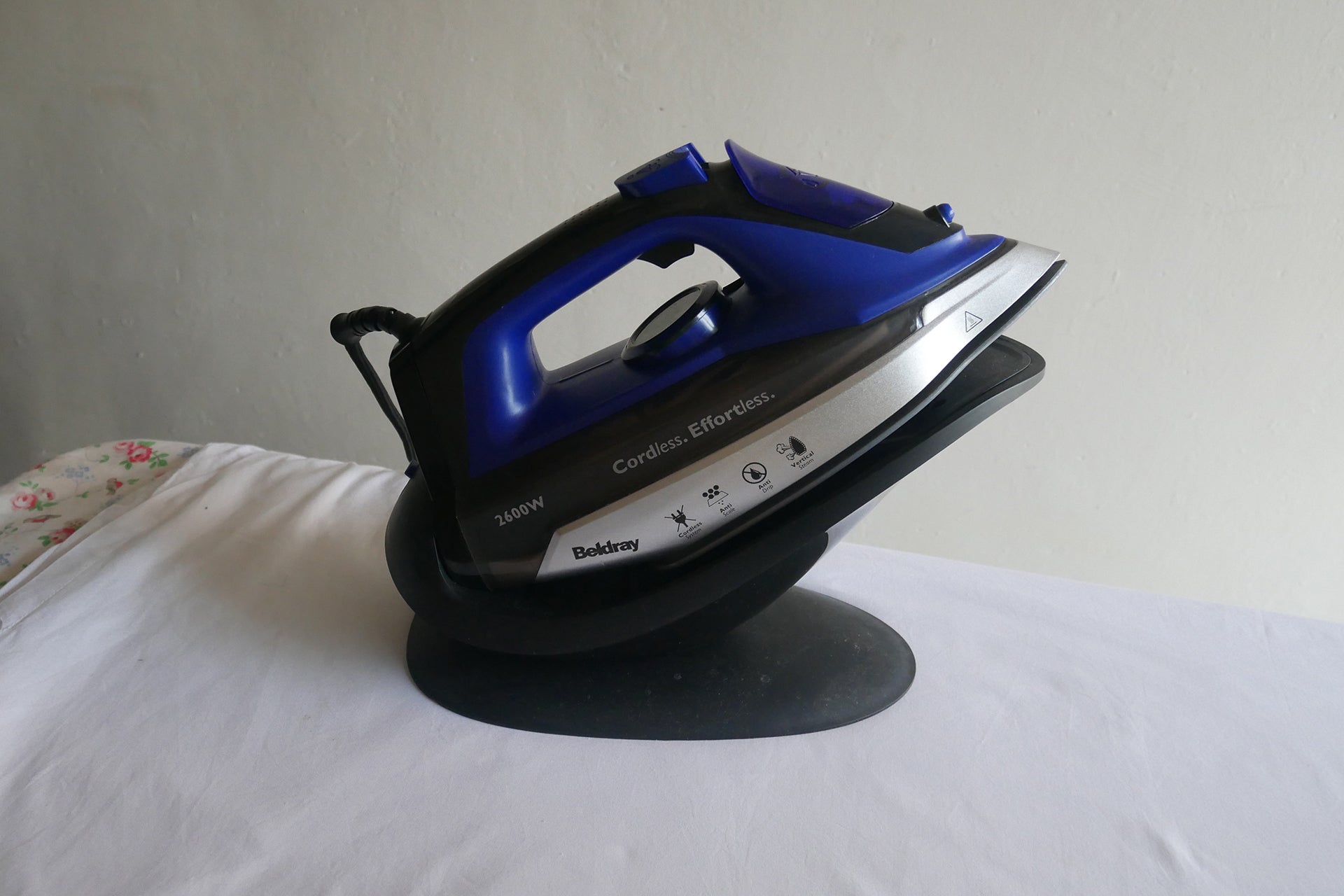 The Beldray 2-in-1 Cordless Steam Iron heated up from cold to the hottest setting in a fast 22 seconds. There’s no auto shut-off feature. I managed 31 minutes of ironing at full steam from a full tank of water. (After 25 minutes, the steam burst had stopped working.) The heat settings were 93ºC, 150ºC and 190ºC.

The water spray is unusually fine and good on this iron; you almost can’t see it on the fabric. The 45 steam-hole soleplate didn’t glide too well, however. Occasionally, when I was ironing on a very dry fabric it would feel sticky – but the instant I used the super-fine water spray (or a damp cloth), the issue vanished. 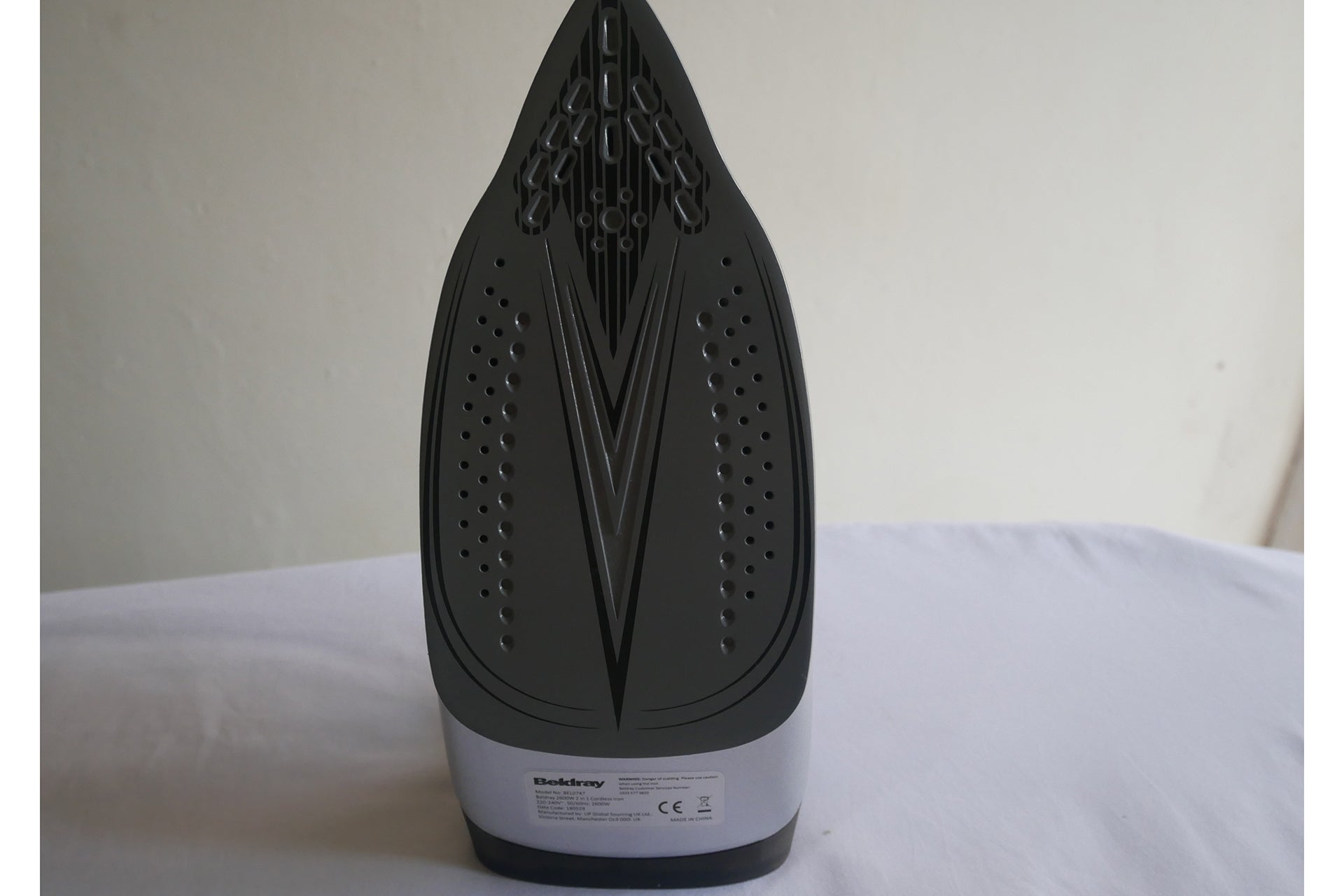 The Beldray 2-in-1 did a good job of dry ironing, produced decent results at low temperatures, and produced a professional crisp finish on a silk cardigan. Cotton blends came up nicely, too; the tip is narrow and curved, which works well around buttons and lace trim. The steam burst is more effective and steamy when used vertically to steam clothes. It was rather gentle when used horizontally, and didn’t manage to get the creases out on the bottom of a folded sheet or smooth dry crumpled linen.

Used in the cordless mode the iron still managed to supply a horizontal and vertical steam blast, but it had a lot less power to remove creases from heavy cotton fabrics. You really need to use it in the corded mode for those. When it’s corded the iron weighs 1.6kg and without only a kilo, which is the very lightest I’ve tested. If you need a light iron – for instance, if you have arthritis in your hands – then the Beldray 2-in-1 is a good choice.

In cordless mode, the iron lost heat fairly quickly. Starting at 190ºC at the top cotton temperature, 30 seconds of steaming and pressing a curtain saw the temperature fall to 130ºC; it wasn’t really having much effect on creases.

I found it hard trying to stop myself from using the steam control trigger to activate the steam burst. The steam control trigger simply changes the dial on the top of the iron from 0 to 1 or 2, and the Steam Burst button is on the top of the iron. But since so many other irons use a trigger under the handle for their steam blast, it was instinctive to try to use the trigger for that.

The Beldray BEL0747 Cordless Steam Iron works well, and the 2-in-1 feature is well designed. The cordless iron is unusually light, so a good choice for those with weakness in their hands. Plus, the corded version looks and feels exactly as a normal steam iron would, and is powerful enough to remove creases from heavy cotton fabrics.

However, the cordless version loses heat fast, so is really only useful on  hard-to-get-at areas on delicate fabrics. For most people, a different model on our Best irons list would make more sense.