Battlefield: Bad Company is F.U.B.A.R. Really. And I mean that in the most complimentary way. Where Frontlines: Fuel of War nervously adjusted the Battlefield template to make it work for consoles as a single-player FPS, Bad Company takes the single player console FPS, gives it a damn good shake, and makes it feel like a Battlefield with 50 per cent more bang and boom. The fact that it does this so successfully is remarkable. The fact that it still contains a fabulous multiplayer component makes it nigh unmissable.

This isn’t the modern military FPS that you’re used to. Sure there are objectives to meet, orders to follow and masses of troops, tanks and helicopters to obliterate, but Bad Company is all about breaking the rules. For one thing, any pretence that you’re simply doing the right thing is broken one third of the way in when your tour of duty in an ugly little Free World vs. Russia skirmish is abandoned for a more self-interested chase after mercenary gold. This isn’t a modern-day Saving Private Ryan – it’s Kelly’s Heroes meets Three Kings meets The Dirty Dozen. Your comrades aren’t decent soldiers, but guys who find themselves in the wrong place at the wrong time because they can’t help doing the wrong thing. And the bad news is that you’ll fit right in with them. 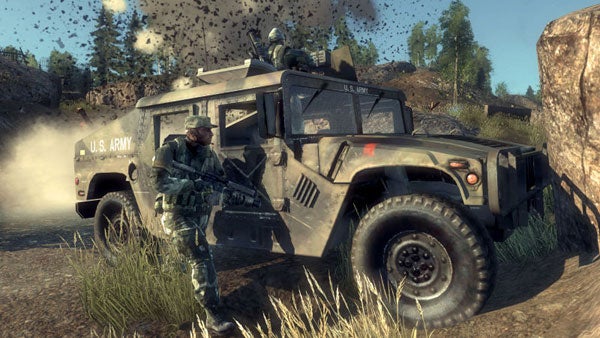 You see, Bad Company encourages an almost childlike glee in mindless destruction. As we mentioned in the preview, this is the game where just about everything, from houses to fuel depots to barricades to warehouses to large areas of woodland can be wrecked if you just apply enough firepower. In a game like Rainbow Six, bang and enter means opening the door, throwing in a grenade, then wandering in to mop up. Here it means simply blasting away the door, the wall, and everything inside as well. To help, DICE hasn’t just made sure you get a plentiful supply of grenades, rockets and C4. No, the level designers have been careful to ensure that the maps are positively festooned with gas tanks, oil drums, ammunition crates and myriad other items that go “BOOOOOM” to ensure that every stray bullet has a chance of causing carnage. If you leave a village, town or farmstead without having given it a post-apocalyptic makeover, then you’re probably not playing Bad Company properly.

The corollary of all this destruction is that safe spots are few and hard to come by. You might think that you’re safe lurking behind the wall or ducking behind that sandbag shelter, but a rocket or tank shell will soon relieve you of any illusions. This isn’t a game of controlled duck and cover gunplay – it’s a game of constant movement and regular bouts of panic. Keep moving, keep shooting, and improvise, improvise, improvise. 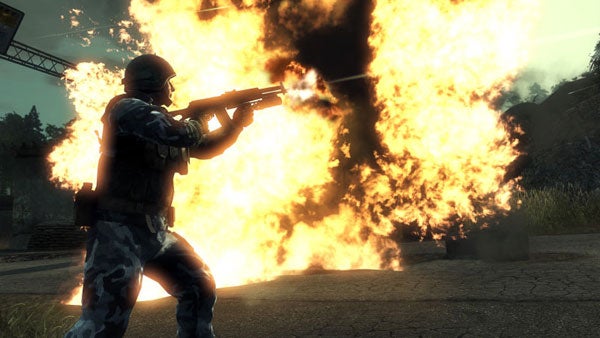 Lucky, then, that it’s a game that gives you so much freedom to do just that. Much has been made of Bad Company’s large, open maps, and while the game uses an artificial ‘leaving the battlefield’ limit to keep you straying from your next objective, you’re nearly always given a pretty large swathe of landscape to traverse, a number of routes in to your target area, and a selection of approaches you can take. As in Frontlines, vehicles aren’t forced on you; instead you can use tanks or armoured personnel carriers as just another tool in your toolbox, along with sniper rifles, rocket launchers and some handy little gadgets that call in mortar bombardments or air-strikes.


“Play it your way”, the game seems to be saying, “Blow things up, get in close, play it sneaky, whatever – just have fun.” And yet the maps and objectives feel less bland and more deliberately constructed than they did in Frontlines. The action might not be as breathtakingly orchestrated as it is in Call of Duty 4, but then Bad Company is all about guiding you to create your own cinematic experience, not funnelling you through one that has been laid in stone already. 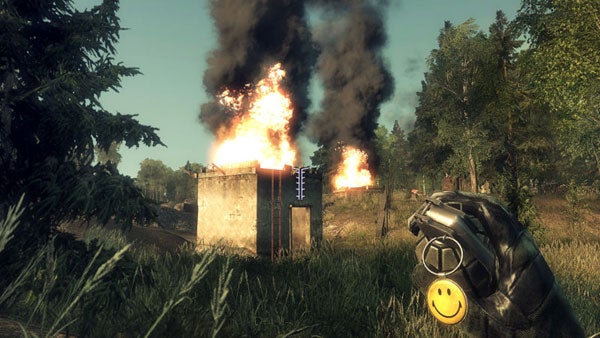 The result is noisy, bombastic and frequently hilarious. The dark humour is almost perfectly pitched, with dialogue that has actually made me chuckle out loud – not something I can say about Gears of War or CoD 4 – yet the experience can be just as overwhelming. DICE’s Frostbite engine is an incredible technical accomplishment, dishing out beautiful outdoor scenery with some gorgeous natural lighting, then using it as a background to stage an almost ridiculous level of comic-book violence; imagine Hollywood had decided to reshoot Rambo on the locations of The Sound of Music. Your three bad company cohorts are superbly modelled, with none of that rubbery-skinned bodybuilder nonsense we’ve had to get used to post-Gears of War, and if the enemy troops suffer from a relatively small library of uniforms and faces, it’s not as if you’ll spend much time looking at them before you shoot them (or likely visa versa).

Admittedly, there are a few details that prevent Bad Company’s single-player campaign from being an unalloyed triumph. First, there’s the issue of AI. Your own comrades aren’t exactly the army’s elite troops – there’s a reason why they’re in B(ad) Company, after all – but you’d think they could shoot straighter and think faster than they seem able to. With no squad control options (which would only get in the way of the action) there are times when you feel more like a one-man army than a member of a team. Your enemies aren’t really much better. Whether they’re snipers, machine-gunners, crack mercenaries or ordinary Russian grunts, they seem unable to move or outflank or coordinate tactics, relying instead on Olympic-standard marksmanship to win the day. As a result the fire-fights, while always satisfying, don’t provide as gritty a challenge as they might in some rival FPS games. 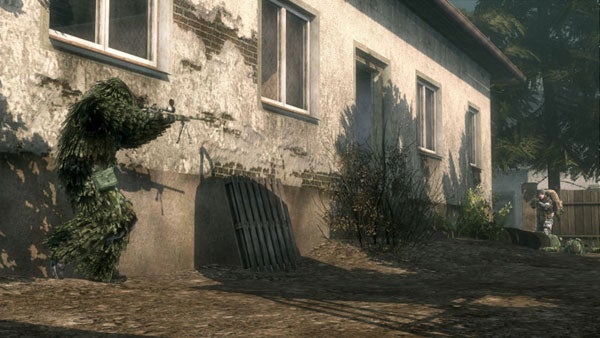 The more controversial issue is the game’s approach to health and dying. While it’s hardly realistic, we’ve got used to the Call of Duty-style health recharge system and to returning to checkpoints when we die. Instead, Bad Company features a system of Battlefield spawn points and a persistent battlefield, leaving you to respawn and get back into the action as fast as possible rather than save and reload as you might in other games. This means that you can win difficult fights through a process of attrition, knocking back enough enemy forces with each respawn to steadily whittle them down to nought. On top of this, a handy recharging syringe gives you an almost instant health recharge at any point. Sure, it gets irritating in protracted battles to have to duck behind cover and administer the medicine, but it does feel a little unfair on your rather more mortal (if suspiciously eagle-eyed) opponents. I can see one group of people complaining that this makes Bad Company a dumbed down military FPS, and another moaning that, were the AI enemies smarter and their marksmanship toned down, we wouldn’t need this sort of ‘cheating’ to get by. 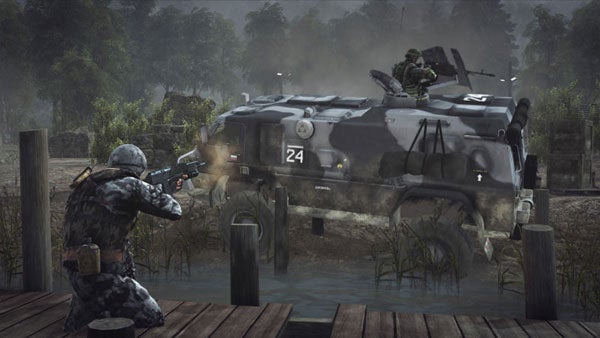 Both groups have a point, but I’ve got my fingers in my ears and I’m not listening, for the simple reason that Bad Company is still an incredible amount of fun. Instead, my most serious moan would be that after a long stretch of entering villages, farmsteads, towns and encampments and killing all troops or blowing up X objectives, the action can grow a little repetitive – particularly if you’ve already been doing similar things in Frontlines or Call of Duty 4. All the same, Bad Company always has enough set piece confrontations, new items or fun new twists to keep things engaging, and there is a lot of game on offer. Each map is huge, with multiple objectives to work your way through, and on the side you have hidden caches of gold bars to discover and elite special weapons to collect, giving the game plenty of replay value after you’ve work your way through once.

And let’s not forget the multiplayer option, either. We may be limited to 24 players per map, but the maps are cleverly designed to concentrate the action into a number of choke points. What’s more, there are still plenty of humvees, tanks and helicopters to take for a spin, and the new Gold Rush mode makes this arguably the most action-packed Battlefield yet. As we mentioned in the preview, the idea is that the two teams are either attacking or defending several sets of two gold chests. With each one the attacking force destroys, they get more resources to use to attack the next. The effect works a little like the frontlines in Frontlines; players aren’t skirmishing over a number of objectives spread across a map, but are encouraged to battle over the same key points, and while you could argue that this dumbs down some of the tactical finesse of Battlefield proper, it does mean that you’ll have those objectives under constant assailment from tank rushes, air bombardments or sneaky devils with demolition charges. 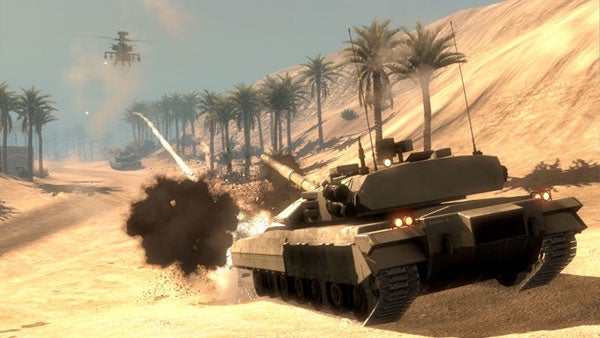 Attackers are encouraged to improvise. The defenders have to stay on their toes. Throw in the destructible environments and you have an online component that is even more frantic, furious and blood-crazed than the single-player campaign – which is saying something. And with a full set of classes, unlockable weapons and persistent stats, it should have legs as well. If Bad Company doesn’t steal more than a few players from Halo 3 and Call of Duty 4, then something is going very wrong with the online gaming world. 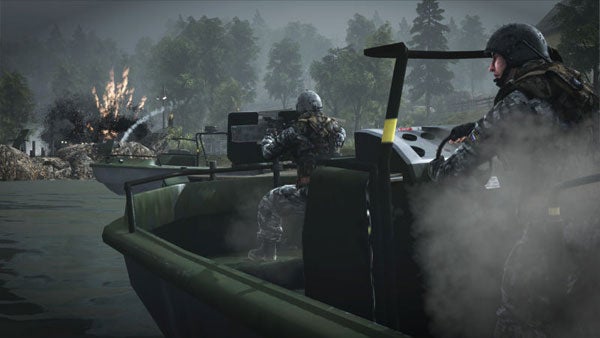 For me, Bad Company has been one of this year’s most pleasant surprises. I didn’t expect anything more than a decent effort at a single-player Battlefield tied to another spin on the classic online action. Instead I found the first modern-day FPS to give Call of Duty 4 a run for its money. It hasn’t quite topped Infinity Ward’s classic, but that’s no disaster when Bad Company has such a strong flavour all its own. The most hardcore fans of military shooters might get annoyed by the mediocre AI and respawn mechanics, but for more casual action gamers this is the first must-have FPS of 2008.


Frantic, furious and stupidly explosive, Bad Company is the most extravagantly entertaining FPS of the year so far. Throw in an excellent online component and you have an unmissable package.