You can almost imagine the meeting: the bigwigs from EA and the guys at DICE getting together to discuss how to follow up Battlefield 2. “Hey”, says one of the money men, “Let’s make this the most controversial Battlefield ever.” “How?” replies a DICE dude, “Do you want us to get edgy? Have the troops shooting up with performance-enhancing drugs, or blowing up civilians willy-nilly? Shall we up the overt political content? Set it in North Korea? Have the US troops sticking it to Kim Jong-Il?” “Nope” the suit replies, “That’s not the sort of controversy we have in mind. We were thinking spyware, in-game advertising, poor security practice, patches and a game that has the hardcore fans practically screaming ‘glorified mod’.” “Great!”, says a DICE designer “we’ve got plenty of ideas in that direction.” 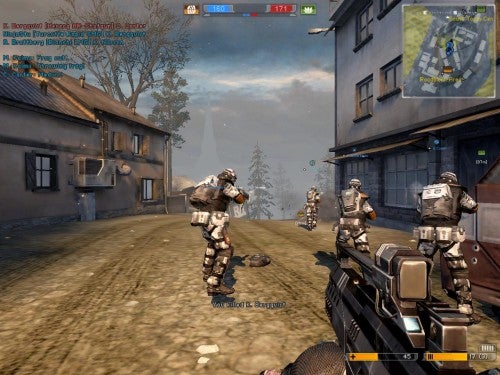 Well, maybe that’s a bit harsh. In truth the spyware thing has been blown out of all proportion. Yes, EA is using your IP address to bombard you with vaguely relevant in-game advertising, but it’s not watching your browsing habits and squirrelling the information away on its world-domination ready servers. Admittedly, there is an argument that a) we don’t want in-game advertising, b) it’s not as if EA is making Battlefield 2142 cheaper as a direct result and b) it’s not as if EA needs the money. It’s also slightly odd to want to advertise in a game set after an environmental crisis and the end of civilization as we know it. Who wants to be the biggest name in street fashion or the automobile industry in a clutch of war-torn cities on a mutilated planet?


And while we’re moaning, let’s just say that Battlefield 2142 doesn’t exactly have the best ‘out of the box’ experience. Firstly, you have to install a patch within days of the game shipping – doesn’t exactly scream quality control, does it? Secondly, actually getting the game to connect to the main EA server can involve opening more ports on your firewalls than anything I’ve ever seen. Thanks guys. Nothing makes my morning like a trip through my router’s configuration menus and with malware proliferating and getting ever more intelligent, I really want to open a big enough hole in my security for the hacker equivalent of the Spanish Armada to sail through. I’d excuse the hassle if Battlefield 2142 was the smoothest online experience of all time, but amazingly it’s even more tetchy about connections than the notoriously sulky Battlefield 2. I’m sure all will be resolved with time, but don’t be surprised if you’re booted off servers or face intermittent connection failures quite a bit, in the early days at least. 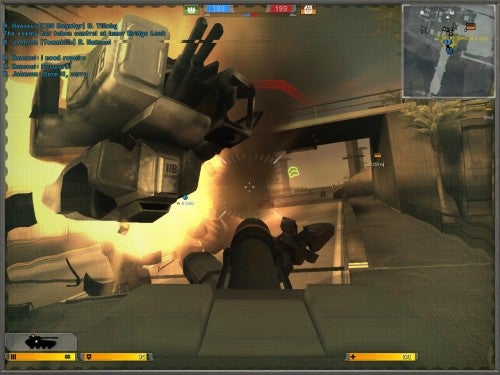 However, I think all the above issues will be forgotten about after a couple of months. What won’t be is the game itself; Battlefield 2142 is as good as Battlefield gets, but your appreciation of it will be either hampered or enhanced by factors which could easily have you swinging either way.


The first is the decision to include an MMORPG-style levelling system. As you fight (online and on ranked servers only) your soldier earns points for kills, assists, neutralisation and capture of control points, etc, etc. Earn enough points, and you graduate to the next rank. This in itself is fine, but DICE has linked ranking-up to a series of unlockable soldier upgrades, affecting either individual classes or global abilities. 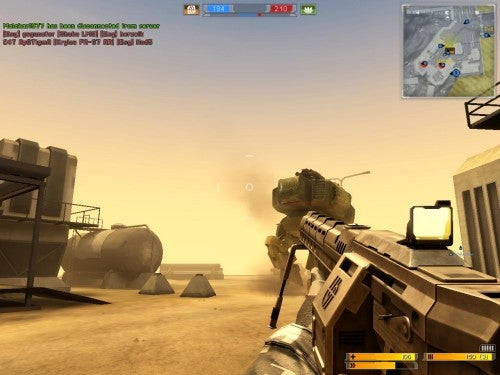 Now, I know DICE wanted to reward loyal players and make Battlefield 2142 as engrossing and addictive an experience as World of Warcraft, but if so I think the basic concept is mistaken. World of Warcraft isn’t necessarily competitive; Battlefield 2142 is, and the effect of the rank system may well be to alienate new players – who are going to have an even tougher time fighting established veterans as time goes on – and spoil the game for more casual players who haven’t got the hours to unlock each and every upgrade before they start really having fun. The hardcore fans will love it, but didn’t I also read DICE saying that Battlefield 2142 was meant to be a populist, mainstream sort of game? 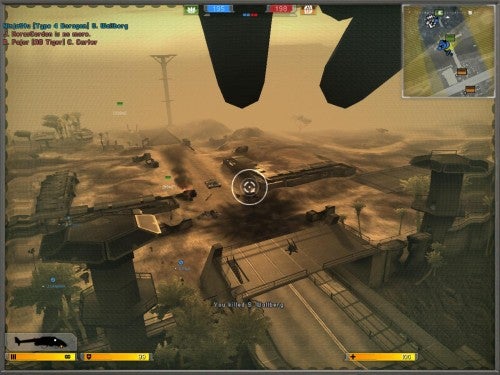 Still, DICE might need all the help they can get with the hardcore, because veterans might be disappointed to find that Battlefield 2142 is closer to Battlefield 2 than the sci-fi setting might have you imagine. Forget combat evolved, this is in many respects modern combat in a near-future radiation suit, with similar landscapes, similar weapons, similar objectives and, in general, very similar gameplay. The guns and the outfits have changed to match the setting – EU forces against a Pan Asian Coalition in a resource-starved future Earth – but at a glance you might be hard pushed to distinguish 2142 from its illustrious predecessor. The game looks great, with the same attention to detail, lush lighting and atmospheric scenery as before, and there are some wonderful weather effects at work, but does it look much better than Battlefield 2? Not really. And when it comes to it, capturing and defending control points feels pretty much like it did last time around. The Internet voices complaining that 2142 is essentially a new skin on an old game do kind of have a point.


Of course, it’s not a totally fair point, and there are some real differences if you care to look for them. Firstly, after the slight confusion of classes added with the Special Forces mission pack, Battlefield 2142 has streamlined the kit system, rolling together some troop types and augmenting others so that, for instance, the general purpose Assault troop now doubles as a medic provided you give him the right upgrade. What’s more, the game is stacked with new vehicles, and while some are essentially augmented jeeps or tanks, others, like the hover-tank or the game’s signature Mech-like walkers have a radically different feel and demand new tactics, both offensive and defensive. Arguably, some maps suffer from having too much heavy artillery. At times, moving without armour feels a lot like suicide – though you can argue that this encourages teams to think more carefully about how they use their resources, and gives the new Recon class (part scout, part sniper) more of a battlefield role. 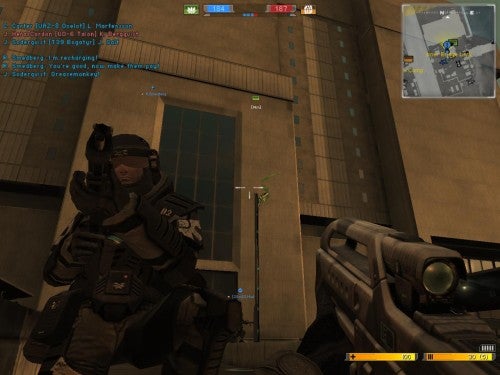 The biggest change, of course, is the addition of the new Titan missions. Here each team has one floating battle-cruiser to protect and a rival cruiser to obliterate, and doing so means occupying automated missile silos so that they can fire off strikes and run down the enemy Titan’s shields. Once that’s done you can either send off more salvos and wreck the Titan’s hull, or – more daringly – land on the Titan by air and attack vital controls from the inside. 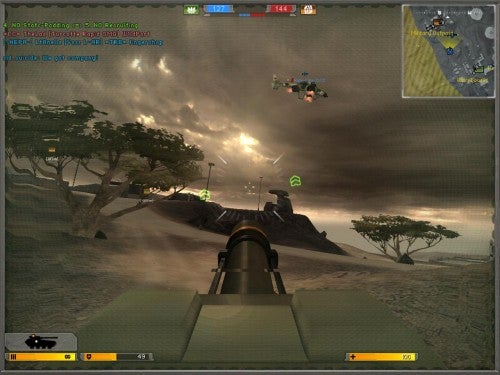 It’s a nice idea, but not entirely successful. Firstly, occupying silos isn’t an awful lot different from occupying control points, so the early part of the game is very much Battlefield as you already know and love it. Secondly, the Titans, once you get inside them, are only partly realised – much like the capital ships in Star Wars: Battlefront 2 – and the difficulties in getting troops of both sides to and from the mothership can make these attacks a lot less exciting than they might be. In other words, what should have been Battlefield 2142’s biggest selling point is fun, but not to the point of making the game a must-have. 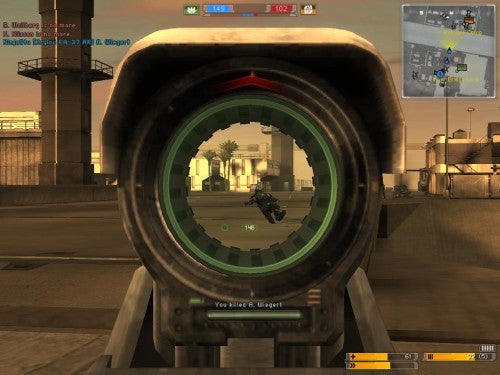 Yet, with all this said it’s hard to call Battlefield 2142 a major disappointment. The formula hasn’t changed, but then it wasn’t broken in the first place, and the tight map design and well-balanced arsenals DICE has put together here ensure that each and every game dishes out big, tasty dollops of Battlefield goodness. If you like fierce confrontations in hotly contested choke points, you got ’em. Ditto if you like roving around behind enemy lines taking easy kills and sneakily capturing control points, or simply flying around in a heavily tooled-up aircraft blasting all and sundry into smithereens. Best of all, the game still feels wonderfully cinematic. The air raids and artillery attacks are as terrifying as ever, and the walkers add a new note of alarm when you see one of the big bastards striding towards you. Most of all, Battlefield 2142 gives you plenty of chance to feel like the big war hero; the guy who saves his squad, holds his post to the last, or takes the objective on his own. Few other games give you more kicks on that front.


And whether it was just a lucky choice of servers or the adoption of the new game by an already experienced player base, I can’t help feeling that people are finally learning how to play Battlefield properly. Sure, there are still players who run to the nearest tank or gunship and race it towards enemy forces without any thought of anything beyond their own kill score, but there are a lot more players who stop and wait so you can man the guns, who pick you up in the middle of the battlefield and whisk you into the fray, or who just stop and heal you when you’re wounded. Even the squad system seems to be taking root. In fact, the one thing that has made my experience of Battlefield 2142 better than my experience of Battlefield 2 was last year hasn’t been anything in the actual game, but simply the improved skills of the people playing it. 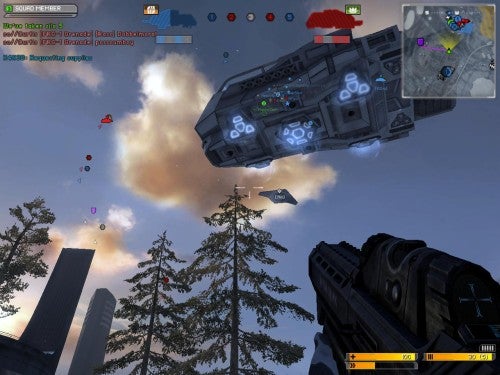 All told, there’s no doubt that Battlefield 2142 could have been more than it is. The setting and the action could have been more imaginative or more convincingly futuristic. The gameplay could have been more innovative, and in some ways it would have been better to wait a year and unleash a more exciting DirectX 10 graphics engine on the world. But that’s all beside the point. The only thing that matters is whether it’s worth your time and money. The answer? Well, if you already have Battlefield 2, not necessarily. As I’ve said, it’s not that different a game. But if you’re new to the series, or just a fan looking for new maps, new vehicles and a few cool tweaks, then don’t let the controversy cloud one thing: at heart, Battlefield 2142 is one of the most exciting and compelling online experiences around.


Battlefield 2142 sits uncomfortably somewhere between glorified mission pack and mildly unimaginative sequel, but while it’s not a revolutionary update it is still an extremely satisfying game. 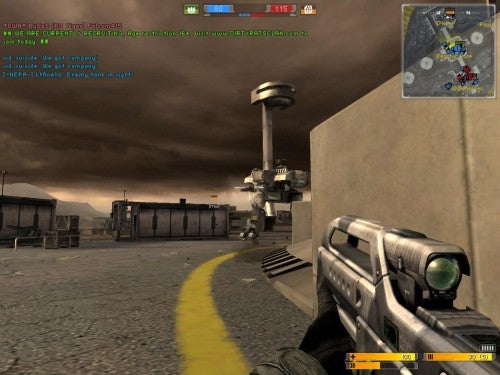