For a minute, let’s sit back and see Battlefield 2 for what it is: the ultimate modern warfare action toybox – a kind of ‘World of Action Man’ for bigger boys to play with. It’s a game that gives you everything you need to create a hundred different combat experiences, or more slightly tedious frontline stories than anyone in the pub will ever want to hear. The thing is; this toybox is already so stuffed with toys – kits, vehicles, maps, weapons – that it’s hard to imagine what the accessories in an expansion pack could bring. EA’s solution with Special Forces is to give it a theme. This, we’re told, is the battle going on behind the scenes; a battle fought by elite troops in black uniform and balaclava, with the aid of sneaky gadgets and underhand techniques. 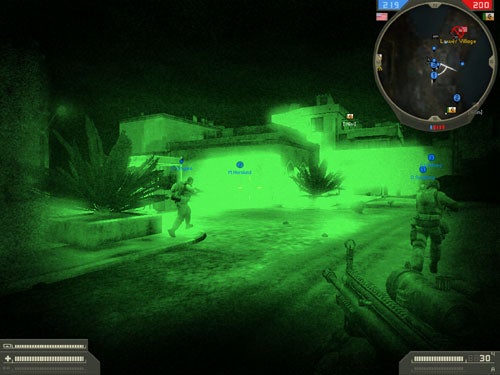 In truth, this all comes down to some revamped kits, new maps and new vehicles, and a slight shift in perspective from Asia and the Middle East to what was once the USSR and the Middle East. This brings with it some new elite forces, pitting the British SAS against the Russian Spetsnaz and US Navy SEALs against similarly equipped MEC units (a pseudo-Republican Guard that actually deserves the reputation). There are also eight new maps, and these prove that DICE hasn’t lost its touch for creating eerily beautiful combat environments with oodles of detailed décor. The palace and gardens in the Warlord map would be a high point for most FPS games, and the misty waters and war-torn streets of Ghost Town certainly give them a run for their money. The new units are as intricately worked and brilliantly animated as their vanilla Battlefield 2 counterparts, and the effects are as special as they have ever been. Battlefield 2 remains the most gorgeous, cinematic online combat experience in town. 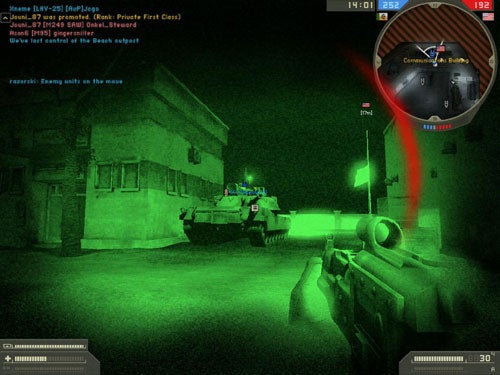 What’s more, two of the maps now take place in darkness, encouraging a more stealthy style of play. In fact, without one addition – night vision goggles – it would be practically impossible to make your way around, let alone draw a bead on that sniper lying low in the grass. Sadly, the goggles make you all the more vulnerable to the new flash bang grenades and you will also need to keep your gas mask handy once the tear gas start flying around. One deep breath of this stuff and your view warps and blurs in a lovely, psychedelic style. Be sure to enjoy the experience in the few seconds before the opposing troops use your head for target practice. 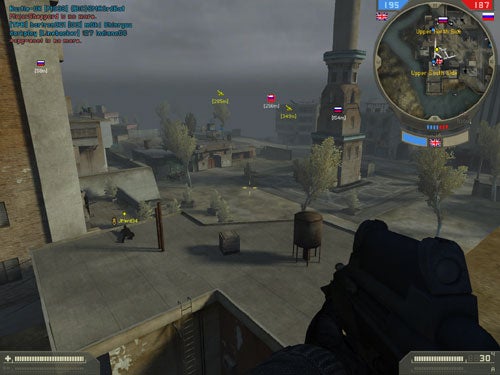 Of course, as anyone who had SAS action man will know, the real thrill of Special Forces action lies in the cool ways you can grapple, climb and slide your way around. To this end, the Special Forces and Sniper kits come with a handy crossbow that fires zip-lines for quick movement from rooftops to the ground, while the Assault and Anti-Tank kits gain a grappling hook that acts like a portable ladder. Expect these to become the camper’s new best friend… 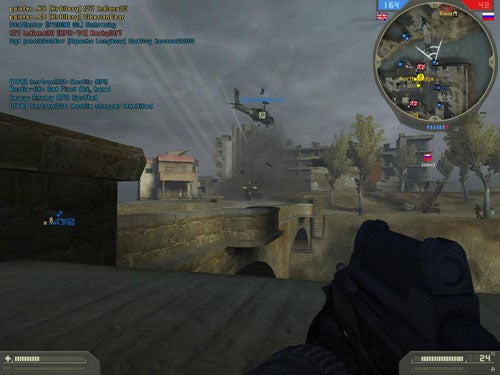 And finally, we get new vehicles. As at least two of the new maps are heavily water-based, it makes sense to get an amphibious personnel carrier, while the Jet Ski makes for some thrilling beach outpost raids. There are also civilian cars and pickup trucks to be grabbed and driven around, and a thoroughly enjoyable little four-wheel ATV for the Battlefield 2 stuntman crowd. Older BF2 favourites are beefed up with missile launchers and heavy machine guns, and there are even new attack helicopters for the flyboys to hog and harass the troops beneath. In terms of bangs for bucks, you can’t say that Special Forces doesn’t try hard. 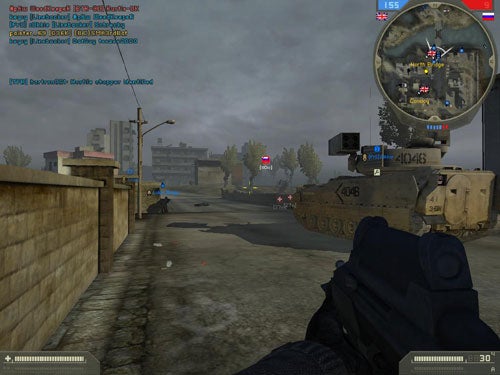 But, try as it might, Special Forces fails to do what it really sets out to: give the Battlefield 2 experience a convincing new twist. This is still Battlefield 2, and it’s still all about killing enemies and capturing control points. It hasn’t become a 64-player Counter-Strike or Rainbow Six, and there are times when it’s hard to remember that you’re not just playing the basic game. Of course, a big shift might well have spoilt what makes Battlefield 2 work so effectively, but the fact remains that this isn’t as different a game as you might expect. While the night battles put more emphasis on stealth and visibility, they still work in the same ebb-and-flow, capture-and-loss way as conventional Battlefield 2 maps. The grappling hooks and zip lines don’t seem to get an awful lot of use, and I saw more flash bang and tear gas grenades while practicing with bots than I ever did online. Perhaps the only major tangible change is a readjustment in the favour of infantry, with fewer tanks rumbling around and fewer planes and helicopters raining death from above. This is definitely a good thing, but it’s hardly the stuff of revolution. 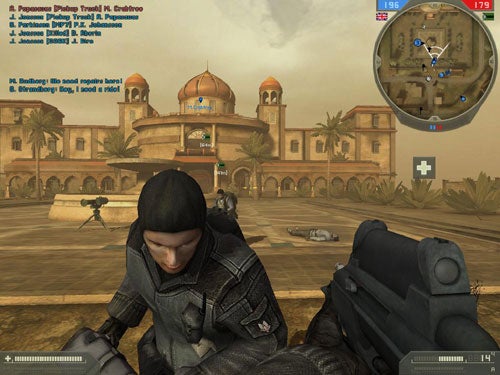 And while I’m moaning, there are some odd design decisions in place. One map, Iron Gator, seemed a disaster every time I played it. It sees MEC Special Forces attacking a carrier full of heavily armed Navy Seals. No prizes for guessing who always seems to have the upper hand. I’m sure there’s a trick that stops this map being a waste of time, but neither I nor my MEC comrades seemed to have a clue what that might be. It was also a little mean to put such a limited battery on the night vision goggles. When they’re practically essential for survival, they leave you feeling horribly vulnerable during the recharge period. 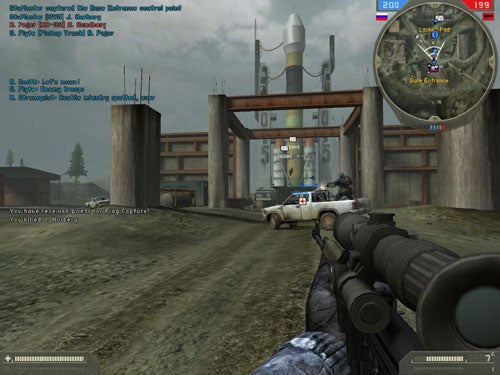 In the end, however, Special Forces’ biggest problem – and greatest asset – is the same as standard Battlefield 2: even an expanded toybox is only as good as the people you share it with. Now, the overall standard of play has improved dramatically since Battlefield 2 was launched, and on a great server, with squads in place and teams pulling together, Special Forces is an unforgettable experience. Even without that level of organisation, it can be an awful lot of fun – if anything, the new maps and infantry-based combat style suit the lone wolf mentality better than the larger, more open maps of the original set. However, the bastards who camp at spawn points are still there, you will still find maps where helicopters and artillery make your life a constant misery, and there are still plenty of chimps who – on a map where the only way into battle is across a stretch of water – grab the one boat, ignore potential passengers, and just rush off into action. If more of these people played with microphone headsets, they would be able to enjoy the sound of their comrades’ teeth grinding… 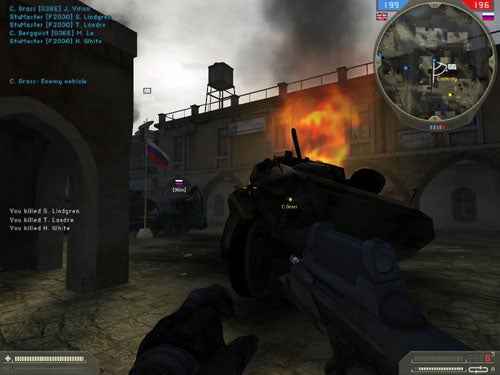 So I can’t say that this is a must-have, absolutely essential expansion pack. In the unlikely event that you’re bored of Battlefield 2, Special Forces won’t reignite your interest, and if you’re already stupidly addicted to Battlefield 2, then you won’t need these revamped kits, new maps and vehicles to hold your interest. That doesn’t mean it’s a pointless expansion, though. The new maps are brilliant, the new vehicles are fun and the kits and capabilities have real potential. UK players will love it, if only to have a few more British voices in the game – hats off for the SAS accents, boys – and a little less US Marine gung-ho nonsense. Maybe these forces aren’t as special as they might have been, but the new toys on offer are definitely worth adding to the box.


A solid selection of accessories that won’t change the way you play Battlefield 2, but will enhance the experience if you want some new toys.