What is the Bang & Olufsen BeoLab 14?

How much is a lot to pay for a surround system? We review sets that span anywhere from a hundred quid to thousands. The £2,500 Bang & Olufsen BeoLab 14 may sound perilously expensive, but it really sits in the middle of this range.

Bang & Olufsen’s main design aim with the BeoLab 14 was to produce a surround sound system you wouldn’t need, or want, to hide.

Like everything Bang & Olufsen produces, these speakers are style-driven, and look the right match of striking and stylish – as long as you don’t mind a sprinkling of the 70s sci-fi seasoning. 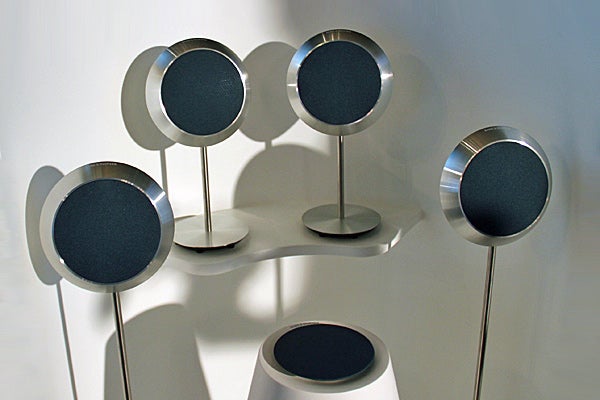 The outer enclosure of the satellite speakers is formed out of a single piece of aluminium, bent into shape under huge pressure for seam-free sides. They look elegant, and you have some control over the look too.

The front of each satellite is covered by a fabric grille, which comes in an array of shades. Blue is the standard, but black, white, grey and red are also on offer. 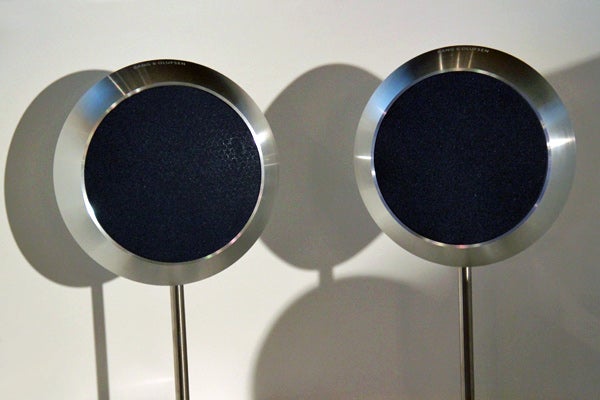 Ever aiming for the lounge-friendly look, the cabling of the BeoLab 14’s satellites runs down the speaker stand, and there are three different types of stand on offer. There’s the roughly metre-high floor stand, the shorter tabletop stand and the wall mount.

All the stands use a thin metal stalk that makes the BeoLab 14 satellites look like petal-free metal flowers. The speakers are tilted upward slightly, which mitigates the relatively short height of the floorstand. 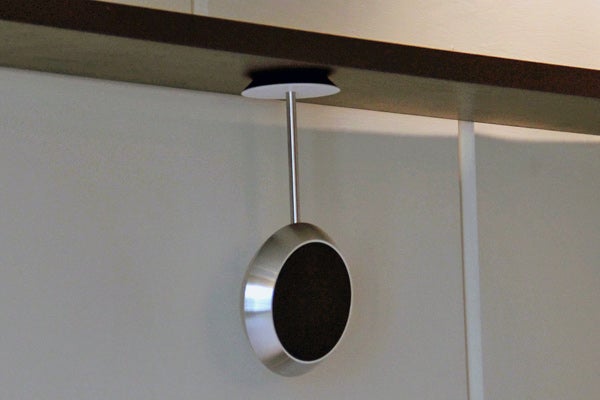 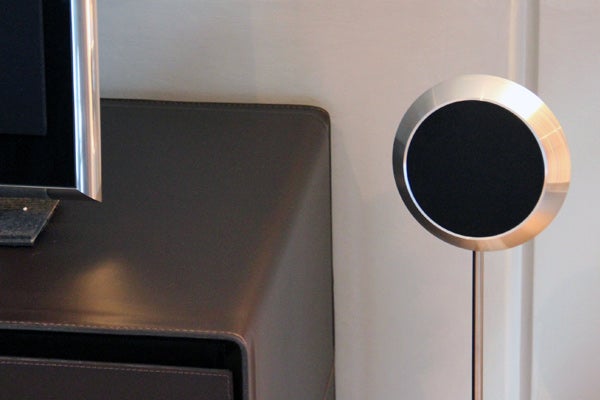 The Bang & Olufsen BeoLab 14 speakers are, like virtually all home cinema satellites, passive – they do not incorporate their own amplification.

However, unlike normal surround sound speaker packages, amplification for the sats is built into the subwoofer. Using class-D amps built into the sub enclosure, each satellite is supplied with 140W of power, while the sub keeps 280W aside for itself. 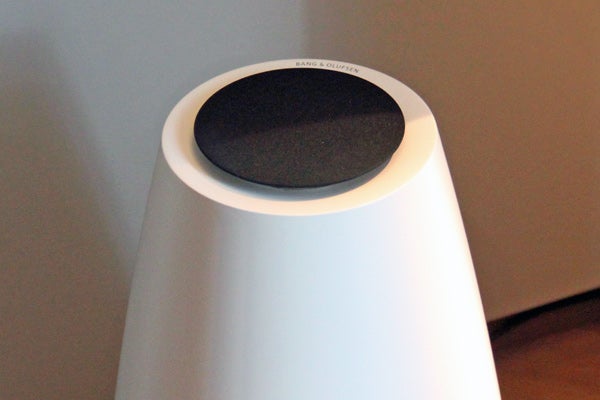 The downward-firing sub has a bass radiator up top

The standard Bang & Olufsen BeoLab 14 setup, which costs £2,500, is actually a 4.1 setup rather than the standard 5.1 type – giving you four satellites and a single subwoofer. This is because the key audience for the BeoLab 14 is current Bang & Olufsen TV owners – these TVs pack three-way speakers into the TV casing, which will act as the centre channel when hooked up to the BeoLab 14. 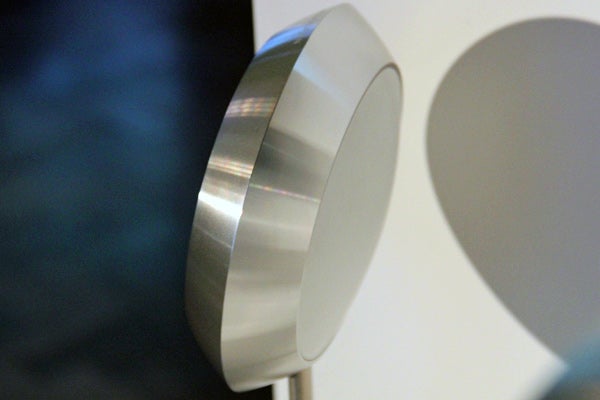 The sats are a bit gorgeous…

The system can be used with non-Bang & Olufsen TVs, but unless you want to use a “phantom” centre, you’ll need to purchase another satellite, which will push the price up to £2,795.

Its connections aren’t the type you’ll find on other surround systems, either. The Bang & Olufsen BeoLab 14 uses balanced Power Link connectors that look like Ethernet ports. To hook it up to a non-B&O system you’ll need to use phono adapters, which rather spoils the streamlined nature of the BeoLab 14.

The Bang & Olufsen BeoLab 14 may look futuristic, but its driver selection is fairly conservative. Its subwoofer uses a single 8-inch driver, the size found in almost all style systems like this, and each satellite has a single 2.5-inch full-range driver.

At this size, any low-mid and bass frequencies will have to be supplied by the subwoofer, as a driver this size simply can’t produce convincing bass. As far as we could see, the BeoLab 14 doesn’t give you any manual control over the crossover frequency – this is a system that’s designed to largely run itself, and will even drop the level of the system if it’s put under too much strain. 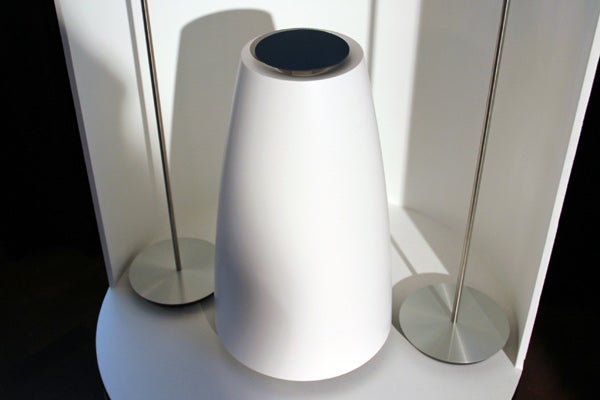 We got to hear the BeoLab 14 system in action and were fairly happy with its performance given the dimensions of the satellites, if not quite its price. The subwoofer is able to fill medium-sized rooms and offers decent bass depth, although it did start to sound a little ill-disciplined when strained at one point.

Clarity was solid, but the system lacked the treble finesse and ‘air’ of a setup with dedicated tweeter drivers, and the material used in the demo didn’t reveal too much about the system’s mid-range performance. We’ll endeavour to get a Bang & Olufsen BeoLab 14 in for a full test soon. 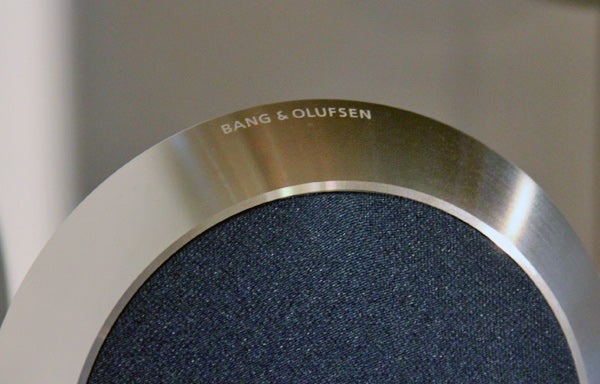 The Bang & Olufsen is an attractive surround system that will look fantastic next to a Bang & Olufsen TV. However, when the market is replete with style-oriented systems, we’re not sure how many non B&O devotees it’ll hook in. It may have a better-recognised brand, but Anthony Gallo, Scandyna and even hi-fi standards like Monitor Audio and B&W, offer similarly-performing style systems for less money.