AVM has traditionally focussed on delivering extensive VoIP services with its unforgettably named Fritz!Box routers. We rather liked its Fon WLAN 7140 for its sophisticated SIP functions and the latest 7170 brings even more features to the table.


AVM offers two new models and your choice will be determined primarily on whether you want wireless services as well as only the 7170 is endowed with these – the 5124 is aimed at basic Internet and VoIP services only. AVM has never been tempted to enter the draft 802.11n fray so you’ll find the router incorporates a standard 802.11b/g access point. It also supports 125Mbps g++ which the company reckons is around 35 per cent faster that 11g speeds.


As with its predecessor, the 7170 functions as a two-port PBX enabling phone calls to be made over the Internet and landlines as well. Another feature that makes this router stand out is support for ISDN as well as its S0 bus, which allows ISDN telephones and PBXs to be connected via a dedicated port. We’re not convinced this is a big selling point as ISDN in the UK is in decline with some businesses using it mainly as a backup connection to their broadband link. We used to have two ISDN lines into the lab but dropped them a few years ago due to their prohibitively high operating costs. 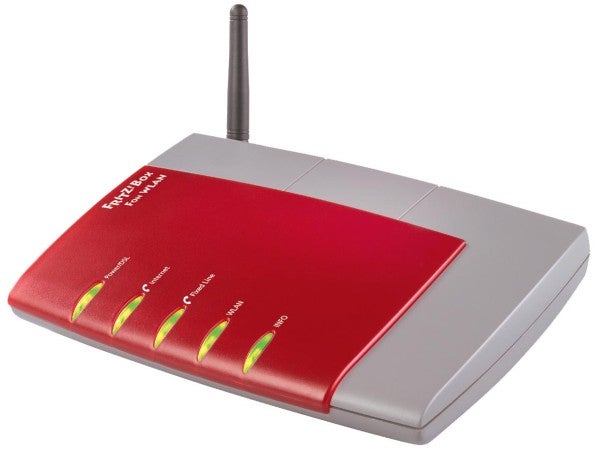 Along with an integral ADSL2/2+ modem, the router provides the standard quad of Fast Ethernet LAN ports. It has a pair of analogue phone ports and you get a USB port that can handle printers or storage devices. It also supports AVM’s ‘Stick and Surf’ although to use this you’ll need one of AVM’s optional Fritz!WLAN USB sticks. You plug this into the router and it’ll download all wireless network information to it including wireless channels, SSID and security settings. When the Info light on the stick stops flashing you plug it into your laptop whereupon it automatically installs its drivers and utility and configures the wireless connection. We tested this on a Fujitsu Siemens 1.6GHz laptop running XP SP2 and watched it work perfectly.


Physical cabling can be problematic thanks to the cumbersome Y-cable provided in the box. This is required for combined analogue and DSL operations where the lower RJ-45 connector is plugged into the router’s DSL port and the Y-branches go to the subscriber unit and splitter. Nevertheless, general installation is handled smoothly by the CD-ROM based quick start wizard and this includes Internet and SIP setup. For the latter we used our Sipgate (www.sipgate.co.uk) account where we just needed to enter our Internet phone number, account ID and password plus the SIP registrar URL.

The router’s web interface is very nicely designed and its home page offers a status readout of the various ports along with quick access to phone books, a call log and a handy Internet traffic monitor. A new feature is Child Protection which enables you to block Internet access for specific users during selected times. The user manual doesn’t mention this but it’s easy enough to configure as you select a computer from the list and decide when it is allowed to access the Internet. We found it worked well although the blocking web page sent from the router hasn’t been translated from German. Where PCs have multiple user accounts you can also block by username but you’ll need to download a small utility from AVM to the system in question to allow this to function. You need to log in and establish Internet access for each user account which then make themselves known to the router after which you can create blocking policies for each one. 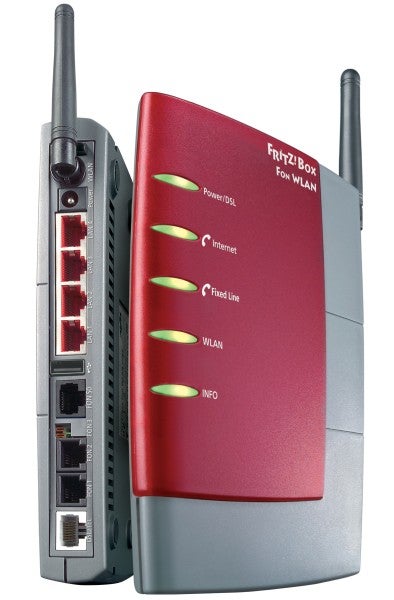 The VoIP functions are virtually identical to this router’s predecessors so rather than waste space here we recommend taking a closer look at our earlier review of the Fritz!Box Fon WLAN for the lowdown on these features – suffice to say they are very impressive. USB storage is accessed directly from the web interface where selecting the device loads up a browser FTP session enabling you to copy files to and from it. Alas, it appears AVM hasn’t updated the port so it’s still the 1.0 variety and is consequently painfully slow. Copying a 58MB selection of photographs to USB stick returned a meagre 2.2MB/sec.


The wireless access point may only be basic but it does provide all the key security features including WEP and WPA/WPA2 encryption. RADIUS server authentication isn’t on the menu but we can’t see many users requiring this business level feature on this type of product. As expected, performance is on the low side with our test laptop equipped with a TrendNET draft-n wireless PC Card returning average real world speeds of around 20Mbps over a two metre line of sight connection.


The ISDN features are of limited value to UK users making this a comparatively pricey router although there’s no denying the 7170 delivers some of the best VoIP features around. The USB port is still the slower variety although it is more versatile than those offered on many competing routers and the new Child Protection option also has some interesting possibilities.

(centre)You only get 802.11g wireless services but essential encryption is on the menu.(/centre)

(centre)Child Protection is a useful feature although an English warning message would have been good.(/centre)

(centre)Pop a USB storage device in the router and it’ll fire up an FTP session with it.(/centre)

General monitoring features are a cut above the rest with plenty of information about line quality.(/centre)

AVM’s Energy Monitor is a bit different but we’re not quite sure what it all means.(/centre)