Formerly known as Liquid Edition and part of the Pinnacle empire, Liquid was acquired by Avid when it purchased Pinnacle at the end of 2005. Liquid Edition 6 hit the headlines back in 2004 as the first editing software to arrive with support for the high definition HDV video format, although the free 6.1 update was required before HDV capture actually worked. Since then, Liquid 7 was the first version under the Avid brand name, and has just been updated to 7.1. 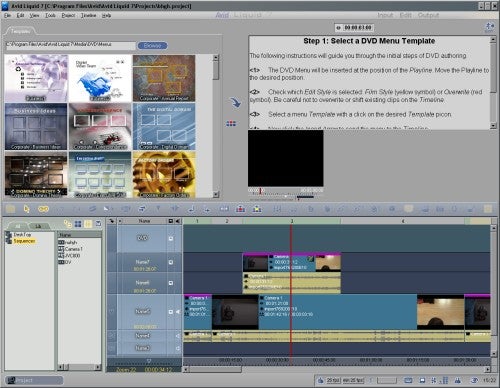 In this second part of our trilogy on the current contenders for semi-professional video editing, our first being of Matrox’s RT.X2, we look at what’s new in this version, and how Liquid 7 compares to more hardware-oriented options. As with previous iterations, Liquid comes in two varieties – one with hardware and one with just software. However, since Liquid 6, the hardware has consisted of a USB 2 breakout box, which takes no part in effects rendering. So aside from video capture and output, everything Liquid does is performed in software, whichever version you buy.


Since its original release, Liquid has done things somewhat differently to the competition. Earlier versions introduced a clever system of background processing to take advantage of idle clock cycles for rendering effects, and this system is still available with 7. However, Liquid was also one of the first editing applications to harness the power of your existing graphics card for real-time effects rendering, back in 2003 – whilst most other vendors were still taking proprietary hardware approaches. 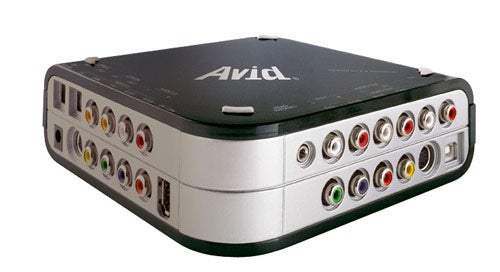 With version 7, Liquid still has a relatively steep learning curve for those weaned on the likes of Adobe Premiere. The interface still uses a timeline, but the effects toolset for example will be unfamiliar to users of other packages. Fortunately, the previous interface which took over Windows entirely has been ditched, and in an attempt to woo users of the lower end Pinnacle Studio software, some friendly wizards have now also been added. These are available through the Input, Edit and Output icons on the top right of the interface. The most notable new wizard is EZ Capture. As the name suggests, this allows you to bring in video without the rigmarole attached to the Logging Tool. The latter is very much aimed at ‘old school’ video professionals, forcing you down the time-consuming (but well organised) clip logging and batch capture route. EZ Capture also allows you to capture DV straight to MPEG-1 and 2 over FireWire – a handy time saver for disc production.

The Pro box, although just an IO device, does bring a few very welcome features, as well as just analogue composite and S-video capture. It can bring in video from component sources, although only at standard definition. It also offers digital audio input and output, with both optical and coaxial connections. The box even includes a FireWire connection, which supports both DV and HDV so you don’t need built-in IEEE1394 on your editing PC. To streamline optical disc production, you can also use this to capture DV straight to DivX, as well as MPEG-1 and 2. When HDV editing, the Pro box can be used to down-convert HD to SD and output it over the analogue connections, so you can preview output on a standard monitor. The Pro version of Liquid included with the box also enables DivX support thoughout the application, allowing you to edit in this format. You can now edit WMV9 natively as well. 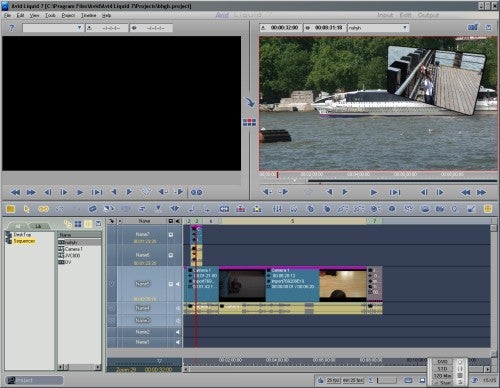 However, many of Liquid 7’s most compelling features are not new with this version. The Multicam tool also arrived with version 6. This allows you to synchronise up to 16 clips from different cameras in a live event shoot together, and switch between them whilst previewing all of them at once. Since version 6, Liquid has also incorporated powerful DVD authoring tools, which use the TitleDeko titler interface for design and offer plenty of interactivity control. You’re unlikely to need a third-party authoring tool, as TitleDeko is one of the best titlers around, and is a great environment for DVD menu design as well.


And so we come to editing performance. There are three types of filter included with Liquid – classic, GPU and CPU. The classic ones are mostly still included for backwards compatibility with earlier versions of the software, and aren’t hardware accelerated. The CPU and GPU effects, however, are rendered in real time. The two overlap, so you can mix and match to get the most out of your system. We found that with DV, our dual Opteron 246 test system was more than capable of playing back four streams of DV in real time. Even with a filter on each clip, performance was acceptable if no longer entirely real time. With HDV, however, Liquid baulked beyond two layers, and adding filters slowed it down significantly. But considering all of this is performed in software, this means the software-only version of Liquid gives you a very productive workflow for the money – and the faster your PC, the more you’ll get.


Many of the enhancements of 7.1 over 7.0 will seem pretty opaque to the average user, apart from the myriad bugfixes, of course. The new features are not as major as the proper HDV support added in Liquid 6.1. However, you can now output Flash Video, iPod and PSP files using the Export to File function. Version 7.1 now also supports XDCAM sources, Canon’s XL-H1, and going back out to tape on JVC ProHD devices – useful to some, but not to many. The performance with the Multicam system has been noticeably improved as well, in particular its responsiveness to actions like scrubbing the timeline.

Liquid 7 already included 60 new real-time filters compared to its predecessor, all of them potentially rendered in real time. Of these, 56 were borrowed from the Commotion compositing software. So these include a number of wacky options like particle effects, blurs and distortions as well as lots of different types of keying filters. The Lighting filter lets you adjust brightness for foreground and background separately, which is useful for fixing flat-looking video clips. But on a more everyday level, there’s an image stabiliser, although this doesn’t have any user-configurable parameters. The new real-time White Balance is excellent, though, and includes one-click correction using an eyedropper. The Linear Time Warp is also pretty incredible, giving you graph-based control over playback speed. You can continually vary the clip speed over its duration. However, it’s only real-time with DV, and only if you don’t use the continual variability. 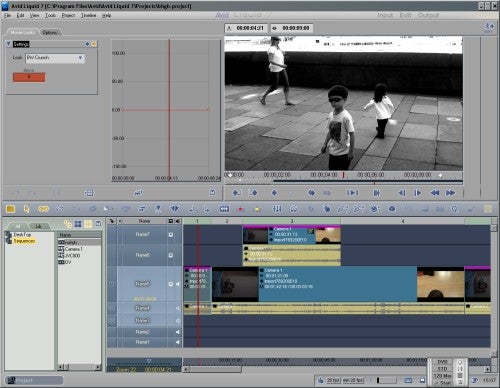 Alongside the 7.1 update, you now also get Magic Bullet Looks for Liquid. These include 55 excellent filter presets for creating the appearance of different types of film treatment. Magic Bullet has a great reputation in video editing, and its filters have been used by MTV and in Hollywood movies such as Jackass. However, we found Magic Bullet Looks would not render in real time, even with DV clips on our dual Opteron 246 test system.


Avid Liquid 7.1 is a rather different beast than Matrox’s RT.X2, particularly in software-only form. The Liquid rendering engine is undoubtedly powerful with DV, but it struggles a bit with HDV, even on a relatively powerful dual-processor workstation. In contrast, whilst the Matrox RT.X2 does need powerful hardware, you get very capable HDV editing in return. So in this respect, you get what you pay for with the more expensive Matrox product. 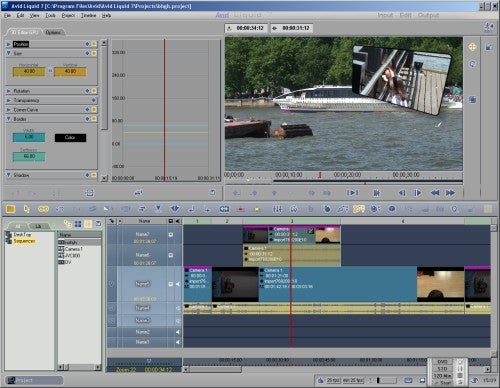 On the other hand, Liquid is a complete package. With Liquid’s extremely strong built-in DVD authoring, small production houses or serious end users have everything they need for taking their productions from tape to disc in one package. We’ve even seen professionals use Liquid for its authoring abilities alone. So whereas Matrox’s RT.X2 leaves you to obtain third-party DVD authoring, Avid Liquid 7.1 offers much better value, although the premium for the Pro breakout box is a little steep.