A few months ago I looked at a couple of HDMI switcher boxes, one of which was supplied to me by AV Tool. Although that particular four port switcher was well built and worked flawlessly, it was part of AV Tool’s professional TV One range, which meant that the price was very high. Now I’m looking at the AV Tool branded four port switcher, which carries a price tag that’s far easier to swallow.


The AVT-5941 switcher certainly doesn’t look as industrial as the professional TV One device that I reviewed previously, but it does look more substantial than the three port HDMI switcher from Belkin. It also has one major advantage over the Belkin – a power switch. I still can’t understand why Belkin decided to not have a power switch on its device, thus resulting in two green lights glowing constantly, even when all your equipment is switched off, but at least AV Tool hasn’t made the same mistake.

It is however slightly disappointing to see that there is no HDMI cable in the box, while Belkin supplies a cable with its unit, even though it’s considerably cheaper – albeit only a three port device. In AV Tool’s defence, any serious home cinema enthusiast will probably have specific cables that they use with their equipment, and would want to use exactly the same HDMI output cable as the inputs. But it’s also fair to say that HDMI switchers will be particularly attractive to consumers with low-end TVs that only sport one HDMI port, and they would definitely welcome a cable in the box.


The unit itself is constructed mainly from extruded aluminium, with curved top edges. The silver finish will please user with silver AV components, but those who opted for black components may be less pleased. That said, I currently have the switcher sitting on top of a Panasonic DMP-BD10A Blu-ray player and it’s far from offensive. The front of the unit has LEDs to indicate which input is currently active. There’s also a button which cycles through each input, while holding the button down will switch the device off. Obviously pressing this same button while the device is off will bring it back to life.

At the rear you’ll find a total of five HDMI ports – four for input devices and one output that links to your TV. There’s also a power socket for the bundled power adapter. Also in the box is a credit card size infrared remote control. The remote can switch the unit on and off, while buttons numbered one to four will switch directly to your desired input. The range of the remote is very respectable considering its size, so you shouldn’t have any problems even if your living room is huge.


Although the HDMI ports in this switcher are referred to as version 1.2 on the box, the guys at AV Tool assured me that it will happily pass through an HDMI 1.3 signal without losing any data. This should mean that if you have an HDMI 1.3 source and TV with this switcher in between, the signal will reach the TV unsullied. Unfortunately, there’s still no software available that makes use of the Deep Colour feature that HDMI 1.3 brings, so I couldn’t test this for sure. But considering that a switcher is basically a pin-to-pin extender, there really shouldn’t be any problems.

Testament that this switcher box is pretty much transparent to the signals passing through it is the fact that Panasonic’s Viera Link system works. I hooked Panasonic’s Blu-ray player up to the Viera TH-37PX70 37in plasma TV with the AVT-5941 in between. Making sure that the switcher box was powered on and set to the correct input, I powered on the Blu-ray player – instantly the TV powered on, selected the correct HDMI input and I was ready to watch a movie. Likewise, if I switched off the TV, the Blu-ray player automatically powered down at the same time. 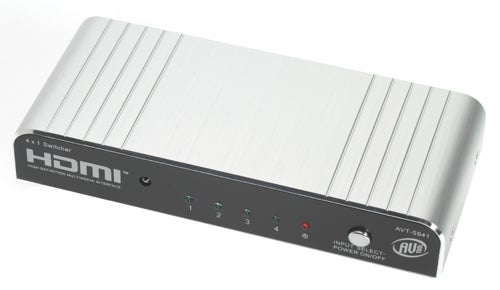 Performance wise, the images produced when source devices are connected to a TV through the AV Tool switcher are identical to when they are connected directly, which is pretty much what you’d expect from a digital signal anyway. The AVT-5941 was happy to pass any resolution signal, including 1080p from both Blu-ray and HD DVD players.


Quite simply, this is the type of product that you either need or don’t need, but in my opinion many consumers are going to find that they do need an HDMI switcher.


Let’s look at my living room for example. I know that I’m not particularly indicative of the average consumer, but just humour me. I have a Panasonic TH-37PX600 plasma TV with two HDMI inputs, but I have three HDMI source devices that need connecting – there’s my Sky HD box, my PlayStation 3 and my HD DVD player. Pretty soon I’ll be looking to connect up Netgear’s HDMI equipped HD EVA8000 media adapter, and hopefully Microsoft will get me a review sample of the Xbox 360 Elite in the not too distant future. This will mean that I’ll have a total of five source devices vying for my two HDMI ports, so my only real option (other than not having so much kit in my living room) is to use a four port switcher like this one. 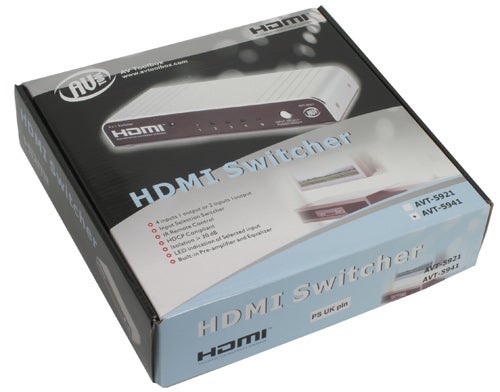 Considering that the vast majority of TVs sold still come equipped with only two HDMI ports, I’m sure that I’m not the only one who will be running out of connection options. Even an average consumer could well find themselves with a Sky HD box and a PlayStation 3, then if they want to use any other digital video device, they’ll have to go through the hassle of unplugging and plugging in cables. Even the latest generation of high definition camcorders have HDMI output, so you’ll want to keep a port free for playing back your home movies before you edit them and burn them to disc.


With a price tag of £119.99 including VAT, the AVT-5941 is a far more affordable option than the TV One device I reviewed before. And even though you may think that it’s a lot to pay for a switcher box, it’s still a hell of a lot cheaper than buying a new TV with more HDMI ports.


The AV Tool AVT-5941 is an excellent solution for anyone who needs more HDMI inputs on their TV. The unit is very well made and performs superbly, even passing through CEC signals without issue. With the amount of HDMI equipped source devices increasing all the time, more consumers are going to find themselves short of inputs, and if you fall into that category the AVT-5941 will be the perfect solution.