If wireless earbuds frustrate then a wired in-ear such as the AF100 MK2 might just fit your requirements. Their performance is a smooth and musical one, and while that comes with its drawbacks, these are a charming pair of IEMs

The Audiofly AF100 Mk2 are in-ear monitors from the Australian brand’s latest range of headphones.

Is there still room in the headphone market for the once popular in-ear? The true wireless market is booming, with audio brands launching wireless earbuds every which way you look. These days you’re lucky to get a smartphone that has a headphone jack. If the end is not nigh, it’s certainly being ushered in.

But the great thing about in-ears is that you don’t have to fuss about compatibility, and choppy wireless connections are banished in favour of uninterrupted performance.

And Audiofly certainly still sees life in wired in-ears. Their new PRO MK2 range of headphones is made up of wired and wireless options for musicians and audio professionals in mind. The AF100 MK2 is the cheapest IEM in the range, and with it, Audiofly hopes to bring its musical expertise to everyone else.

The look of the AF100 MK2 is unlike any in-ear we’ve recently tested. The 9mm dual-diaphragm dynamic microdriver (try saying that quickly five times) are housed in a semi-transparent plastic casing so you can just about see the tiny magnet and wires inside. It gives these IEMs a bit of character that a boring-old black or white finish wouldn’t.

The plastic material that house makes the AF100 MK2 feel cheap and disposable and the use of plastic gives them a rugged feel when it comes to fit. It’s not the smooth, slick impression you’d want when putting in an in-earphone in for the first time. They prove to be comfortable once you get used to them.

The AF100 MK2 uses an over-ear hook design, which means instead of just planting them straight into the ear, the cable is meant to travel up your back and through to the back of the ear. The over-ear hook design is a common approach for IEMs of all prices and allows for a better and more secure fit in the ear.

And as such, the seal is measurably improved over some true wireless offerings. They’ll bat away most noises when you’re outside, though you’ll need to take care in busy areas as there is, of course, no passthrough mode unless you remove them. 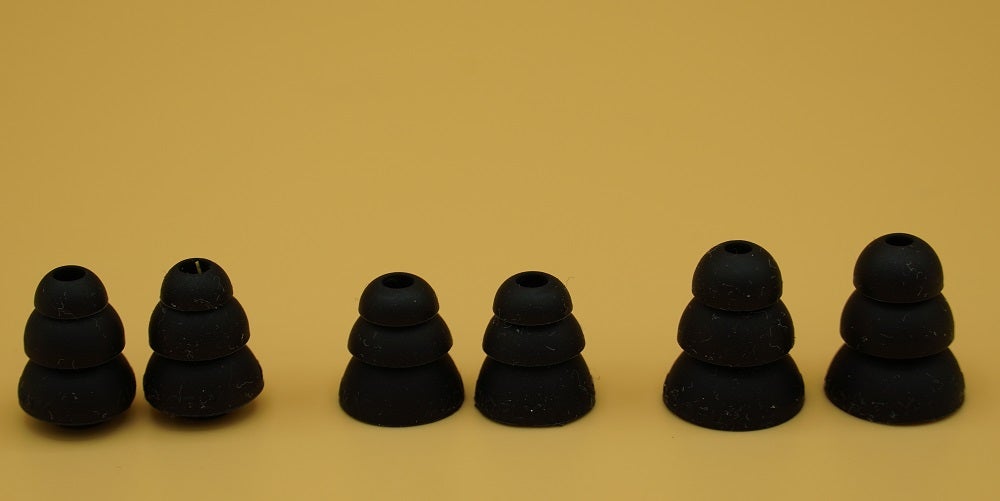 The headphones come with tri-flange eartips

If you’re finding the fit tricky, the IEM comes with a range of ear tip options. There are three silicone domes (S, M, L), three silicon Tri-Flange (S, M, L) and one foam earphone tip, which is the default choice. Switching between them aids the fit for even better noise isolation, although this does change the character of the audio too.

The IEM is rated at IPX4 resistance, which protects it from splashing water. If you want to keep them further safe, the AF100 MK2 comes with a small storage case. The 1.2m double braided cable is a lot easier to untangle than some other in-ears I’ve tested. 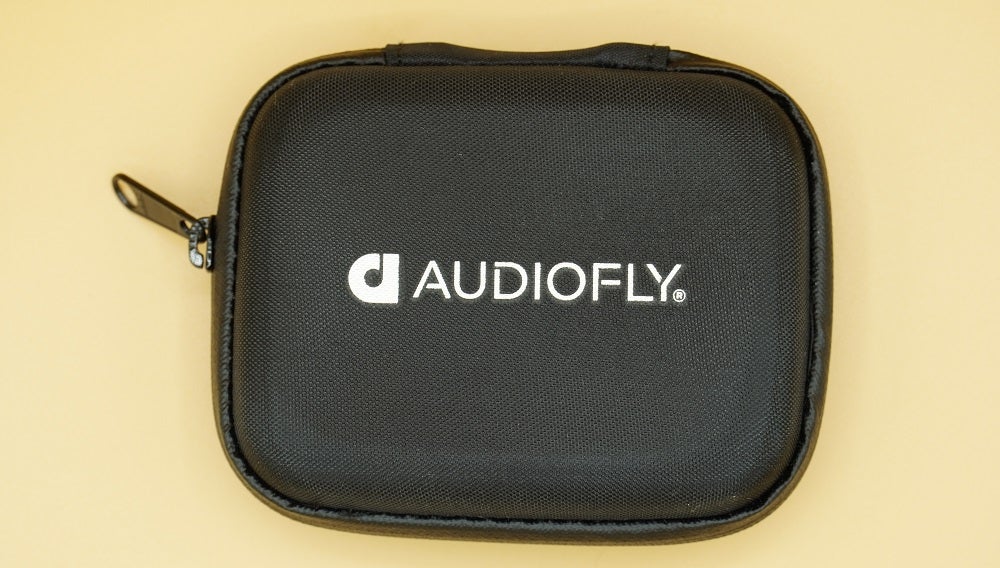 Audio quality — Balanced, expressive and musical in its presentation

It’s worth observing the manual refers to burn-in. Plenty of review sites and forums have debunked it having an effect, arguing headphones should sound great out of the box.

That ought to be true but isn’t always our experience. It would seem Audiofly agrees to an extent. They suggest running the headphones in at moderate volume for around 40 hours to break in the mechanical parts. With that in mind, we give the AF100 the time they need, and while the effects aren’t too pronounced, it gives us a solid foundation to assess them. 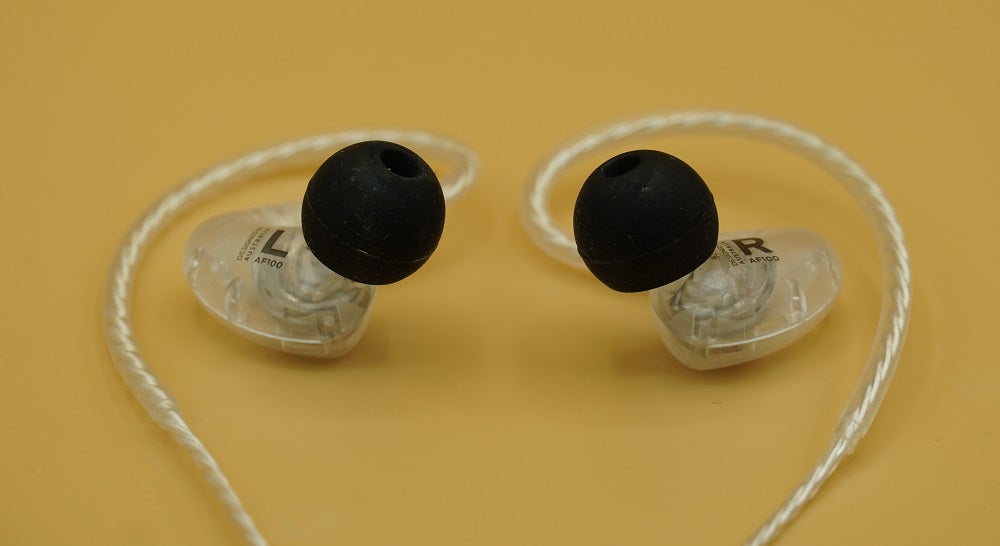 First and foremost they’re a likeable pair of IEMs. Changing the ear tips affects the presentation, so if you don’t initially like aspects of what the AF100 MK2 do, it’s worth trialling other ear tip options.

We start with Janelle Monae’s Can’t Live Without Your Love from The Electric Lady album, and the AF100 MK2 makes a positive impression with its smooth, slightly warm but still balanced sound. The presentation can feel a bit thick at times, a trait that seems to be common with the other Audiofly headphones tested on Trusted Reviews, and it does seem to get in the way of the AF100 MK2 dredging up detail. The brass instruments in Can’t Live Without… aren’t described with as much detail, getting slightly lost in the track. 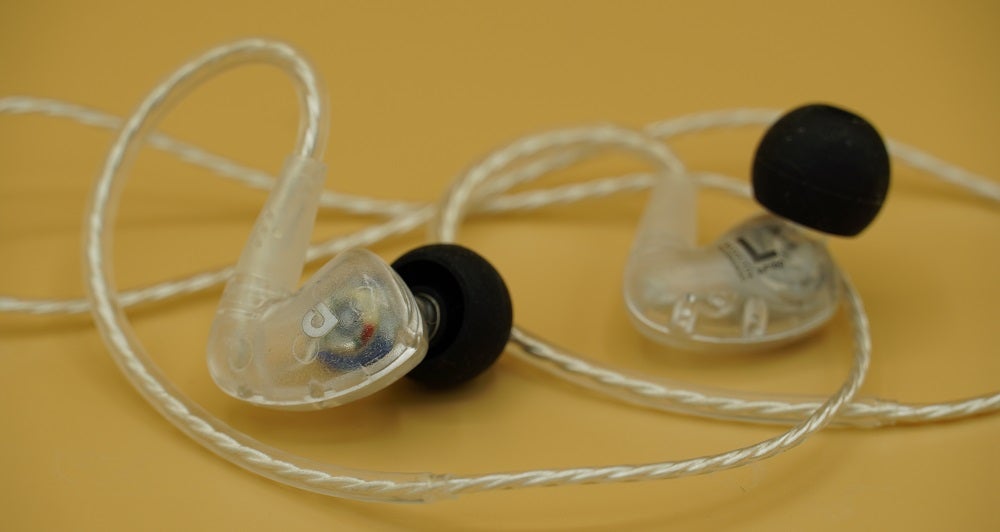 But its easy-going musical quality is charming and infectious. Vocals are clear and well-expressed, and the soundstage of whatever was played was reasonably broad, granting tracks space to play in. It’s not the sharpest or most detailed of performances, but it is fun.

Dynamically they’re assured, with transitions handled smoothly, though they could conceivably be more impactful. Treble frequencies ring true and bass is measured and not over-zealous in its handling.

Something that doesn’t quite sound as organised is the midrange. Changing to a foam ear tip helped elevate the thin-sounding midrange, but it still lacked a bit of detail and fullness. The strings in I Was Made For This from the Avengers: Endgame track sound a little hollow compared to the more energetic Shanling ME100.

Even so, these are a winning pair of in-ears with a presentation that rarely fails to draw you in.

You should buy the Audiofly AF100 MK2 if…

Unlike wireless, wired headphones aren’t prone to connection drops, so you’ll get the best sound in any circumstance.

The AF100 MK2 are fairly neutral and balanced, but aren’t the most detail orientated.

Their IPX4 rating brings water and sweat resistance, so they can be used for exercise, too.

You shouldn’t buy the Audiofly AF100 MK2 if…

These are wired in-earphones and there’s not much else to them other than that. If you want actual features you get from wireless earbuds, look elsewhere.

It should be obvious, but if you can’t plug these headphones into your mobile device then they’re of no use. They’re of more use with personal music players.