Back in January I reviewed the ATP PhotoFinder GPS picture tracker, a handy gadget used to record the position at which a photo was taken using co-ordinates from the international Global Positioning Satellite network, the same system your car’s Satellite Navigation uses. The device has proved to be a big hit with the growing hobby of Geotagging, so not surprisingly ATP has followed up with the launch of the PhotoFinder Mini, a more sophisticated device with some additional features. 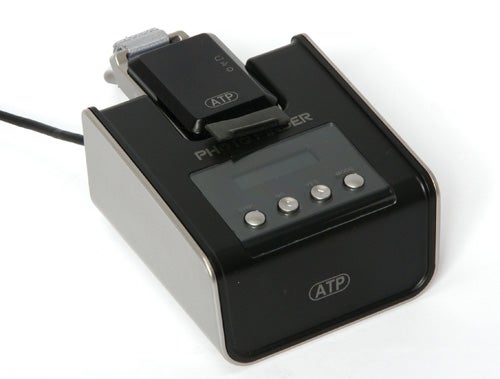 Unlike the original device, the PhotoFinder Mini consists of two separate parts, a small base unit containing card reader slots for SD/SDHC, CompactFlash or Memory Stick, a battery charger and USB plug on a shot cable, as well as a docking position for the second and smaller part, the GPS receiver itself. This part is about a third of the size and half the weight of the original self-contained PhotoFinder and about half the size of the Sony GPS Location Recorder, measuring approximately 24 x 35 x 60mm, and weighing approximately 40g. It has a short fixed webbing strap connected to a small metal karabiner-type clip used to attach it to you camera bag or belt, but it is so small and light that you can attach it to your camera’s neck strap without it getting in the way too much. 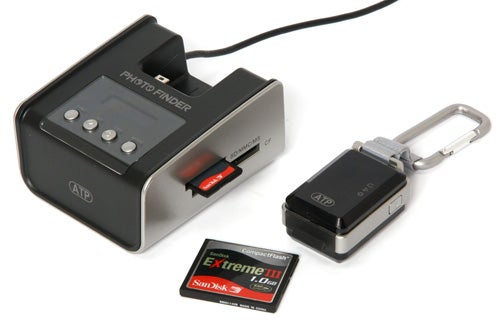 The receiver unit has a mini-USB socket and a slot for an MMC Micro memory card, which is used to store the recorded GPS data. It comes with a 128MB card as standard which provides enough storage space for around 16 hours of data, which is also the maximum duration of the unit’s rechargeable battery, but larger cards (up to 512MB) are available. It’s a shame that it doesn’t use the cheaper, higher capacity and more readily available Micro SD cards used in many mobile phones, but it’s not a major handicap.

The original PhotoFinder did look a bit cheap with its Day-Glo-green plastic, but a bit more styling effort has been put into the PhotoFinder Mini. Both parts of the device are attractively designed and quite well made, although the rubber port cover on the bottom of the receiver unit is rather loose and comes open with little provocation. The shiny black plastic does pick up scratches quite easily too, but it appears to be sufficiently robust that it won’t mind a few knocks and bumps. My review sample, supplied direct from the manufacturer, is fitted with an American-type two-pin mains plug, so I’ve had to use a mains adaptor for our three-pin British sockets, but I expect that UK retail units will be equipped with the appropriate mains plug. 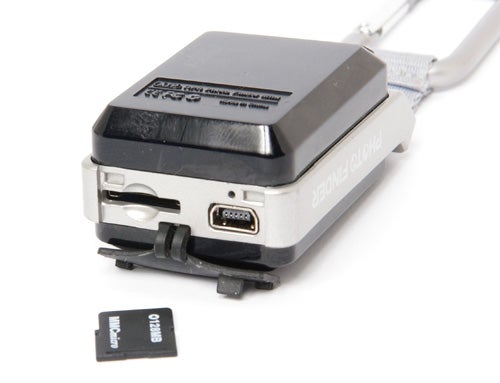 The PhotoFinder Mini is quite easy to use; the only control on the receiver unit is an on/off button. Holding the button for three seconds activates the unit, whereupon it starts scanning for satellite signals. A small blue LED flashes inside, visible through the black acrylic body to indicate the status of the GPS signal. The original PhotoFinder took around 10 minutes to locate a signal, which could be a bit frustrating, but the new device is much quicker. I found that on first use it would take three of four minutes to find a signal, depending on the surroundings, however on subsequent attempts, such as when leaving a building or a car, it would find its signal again in about 20 seconds, which is pretty quick. 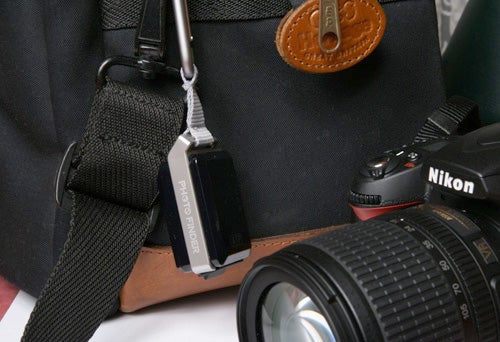 The device doesn’t connect to your camera in any way. It works by comparing the time code on its recorded GPS data with the time recorded by your camera in the JPEG EXIF data of your photos, so it’s vitally important to ensure that your camera’s internal clock is set to the correct time. It is possible to set the time-zone when downloading your pictures, but it’s a good idea to make sure this is also set correctly on your camera as well.

When you get home, you simply pop the receiver unit into the base station, put your camera’s memory card into the slot on the base unit, and press the “Sync” button to start adding the GPS data to your pictures. There are a couple of quick options to confirm, but the actual process is very quick and simple. If for some reason it fails to tag any pictures it will tell you, but I only had this happen once on several expeditions. 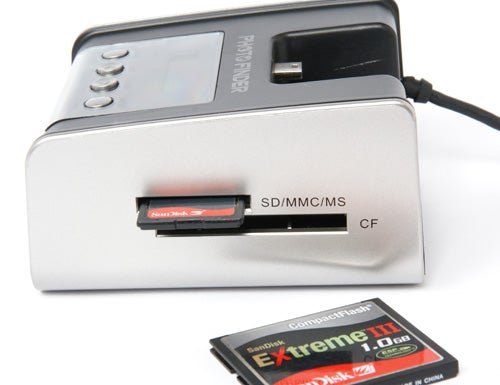 The PhotoFinder doesn’t come supplied with any software of its own, but instead relies on Google Picasa and Google Earth, both of which are available for free download. Both programs are well-proven, and the Geotagging feature on Picasa works flawlessly with the EXIF GPS data recorded by the PhotoFinder, automatically logging the position at which the photo was taken in Google Earth. The accuracy is quite impressive, hitting the correct position to within about 5-10 metres. The improved performance of the receiver means fewer missed locations, and the only time I found that the unit failed to record data was when I was either indoors or surrounded by tall buildings. 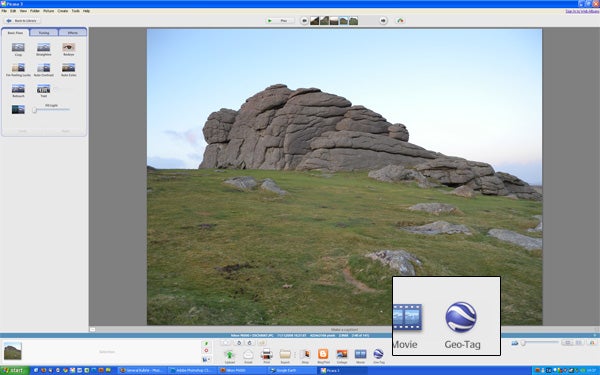 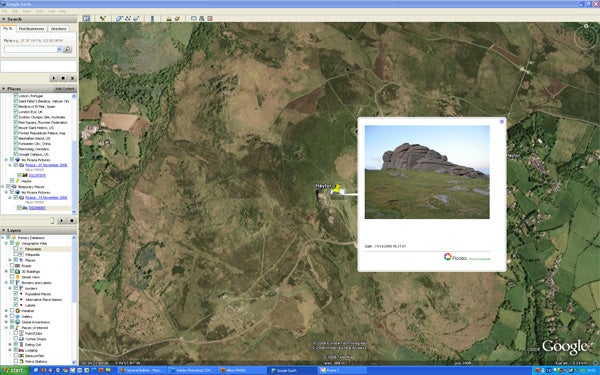 The ATP PhotoFinder Mini is a great little gadget, the perfect tool for anyone who’s into Geotagging or who just wants to record the location of their photos, for example for birdwatching or exploration. It is small and light enough to take anywhere, attractively designed and – apart from that rubber cover – well made. It is quite easy to use and performs well in most outdoor locations.