Whether they’d top your list when it comes to gaming or not, few can argue that ATI’s All-In-Wonder series of graphics cards have continued to lead the way with their powerful blend of class-leading multimedia features. Fending off the competition for a year or two is a noteworthy achievement in the cut-throat world of PC graphics, but the fact that ATI has managed to do it since it launched its first All-In-Wonder part back in November 1996 perfectly demonstrates its dominance in this field.


The All-In-Wonder X600 Pro is significant in that it’s the first All-In-Wonder graphics card to be built around the new bi-directional PCI Express x16 technology, and although powered by an RV380 VPU it’s essentially a PCI Express adaptation of the RV350 Radeon 9600.


The part comes equipped with 256MB of Hynix DDR SDRAM rated to run at 300MHz, which is precisely what it’s clocked at. The VPU is clocked a touch higher at 400MHz.


Basic display support encompasses analogue CRT monitors via a traditional VGA output, digital LCD and flat panel displays via a DVI-I output, TV and VCR connection via S-Video and composite connectors and HDTV via an optional component video adaptor. Dual independently driven displays are also supported. I must admit I was slightly surprised ATI didn’t opt for dual DVI outputs and a dongle, and equally surprised to find that no DVI to D-SUB dongle was supplied as standard, making a dual analogue display setup impossible without an additional purchase.


ATI seems to have put some effort into solving the problems caused by having so many physical connections offered through such a limited amount of space. In addition to the D-SUB and DVI connectors on the card’s bracket, there’s now an additional connector which takes a small metal I/O block sprouting four short fly-leads. Of these four cables, one accepts a coaxial RF TV or cable input and another takes the antenna for the FM radio tuner. The other two are used to feed signals to and from the newly designed I/O connector boxes (breakout boxes).


The new I/O boxes each feature four connectors on their front face, one for S-Video, one for composite video and an audio left and right connector. The only other distinguishable difference between the two I/O boxes other than cable colour is that the output box cable also sports an additional pass-through audio connector to allow simultaneous connection to your speakers, a line out jack and a coaxial S/PDIF output. Each I/O box, which is designed purposely to look like a domino tile incidentally, has ten raised plastic lugs on its top face and ten corresponding holes on its lower face allowing them to be stacked together securely.


At the heart of the X600’s multimedia talents lies the Theater 200, which combines analogue video decoding with stereo audio processing. Onboard are some neat anti-aliasing routines, automatic gain control and a pair of 12-bit analogue to digital converters. You also get high quality horizontal and vertical video scaling, adaptive 2D comb filtering and of course, support for PAL, SECAM and NTSC broadcast standards. Macrovision detection is also in place, though whether you view this as a plus or a minus depends on which side of the industry you reside.

Staying with the hardware, one very obvious change to the card is the very dramatic shrinking of the TV tuner module. This is down to the fact that ATI is using a digital TV tuner, though that’s in the sense that it uses digital circuitry rather than being able to receive digital signals. It’s still only picks up analogue TV.


The bundled software may vary so I’ll not cover that in this review, but what is certain to come with the card is ATI’s Multimedia Centre software suite, currently at version 9.08. Multimedia Centre is very much the cockpit from where you steer your All-In-Wonder journey and offers single-point control to a bewildering array of functions and features including TV channel selection and scanning; pausing, recording and scheduled recording of live TV broadcasts; tuning, pausing, recording and scheduled recording of live FM radio broadcasts and much more.


The user interface, which was seen as fresh and funky when it first appeared, is now looking decidedly dated. It’s also not the most responsive of interfaces with a very slight but perceptible lag at times between hitting a button and something actually happening.


More impressive are features such as ThruView, which assigns a variable level of transparency to your windowed of full-screen TV broadcast and then allows you to work through it, for example by clicking icons or selecting text lying behind it.


Another useful feature is EAZYSHARE, which enables an All-In-Wonder equipped PC to send TV to any other “Built By ATI” RADEON™ graphics card installed on any other machine on your predefined network. These satellite machines can also be given permission to change the TV channel and perform a variety of other TV-related tasks such as PVR, pausing live TV and more.


Perhaps one of the most useful software additions, certainly for HTPC use, is EAZYLOOK. This is simply a skinable user interface designed to make it easier to access the All-In-Wonder’s many functions using the lower resolution found on most TV screens. Three coloured skins are supplied as standard. It’s also designed to integrate seamlessly with ATI’s Remote Wonder controller. The X600 we were sent incidentally came equipped with the Remote Wonder II, a USB 2.0 remote multifunction control which has had a chequered past in terms of software compatibility, though which has seen recent improvements thanks to the creation of third party plug-ins. If you buy one of these cards, it may or may not include the remote depending on the bundle.


For me, one of the most useful additions to the software is the ability to now capture to MPEG 4. Also, the multimedia player can now handle RealMedia, Microsoft Windows Media Video 9 and DivX content.


These are just some of the many functions available from the current software suite. For more details I’d advise you to head on over to ATI’s site at www.ati.com and look through the features for the latest Multimedia Center incarnation.


Setting up the software generally goes one of two ways. It either goes off like a dream first time, or it takes a wrong turn and leaves you in a mess that’s far from easy to dig your way out of. Admittedly there are a lot of components to install with an All-In-Wonder card but smart software should come with smart installation, and when ATI’s installation goes wrong, it’s anything but smart.

This aside, my only other major gripe, apart from the dated feel, was the excruciating length of time it seems to take for the TV app to perform an exhaustive channel search. My advice is perform the quick search first and if, as in my case, channels go undetected, then activate the exhaustive search and go and grab a coffee, a sandwich, make a few phone calls and snatch forty winks. When you get back it might have finished.


Like most PC-related TV tuners, reception sensitivity was some way below what you’d experience from a regular TV. I also noticed that the tuner got quite warm over time.


As a final note, many PC users now have a machine in the bedroom so perhaps it’s time we saw the software offer an integral sleep timer, a TV or radio alarm function and perhaps even a mood-light. 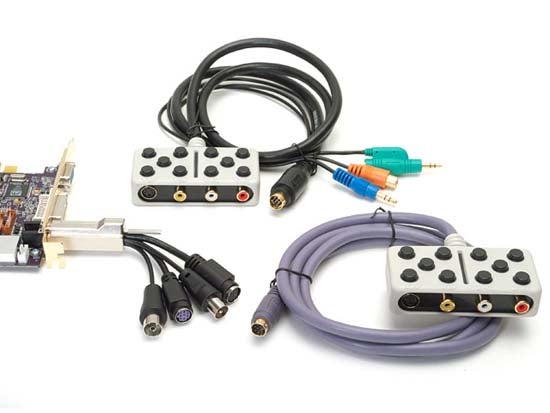 
Compared to its All-In-Wonder brethren based on the newer Theater 550 chip, the X600 Pro’s analogue TV image quality definitely doesn’t pass muster. This combined with the slightly sluggish and dated-looking software creates a strangely “old technology” feel to the whole package.


ATI doesn’t seem to have done anything to iron out its software installation difficulties either, and it remains unnecessarily complex if things don’t go as they should at the first attempt, something that seems to depend as much on platform, existing drivers and current software on your system as it does on you having read the manual and knowing what you’re doing.


There’s much to like about the hardware, particularly the new cable connection system, but the software doesn’t do it justice.


With little to offer in terms of 3D gaming – it achieved 23fps in Doom 3 and 33fps in Far Cry at 1,024 x 768, and a generally lacklustre multimedia showing, it’s hard to get excited about the All-In-Wonder X600 Pro on any level. I’m sure better value and better-balanced cards are not far away and I’d be tempted to bide my time until they appear.


Ultimately you need to decide if you can get better functionality from a separate graphics card and TV tuner card for the same price. If so then that’s the route I’d take personally, just so they can be binned and upgraded independently. If not, then the AIW X600 Pro may be worth considering, although check the bundle carefully before you buy if you want the Remote Wonder.