We were suitably impressed when ATI released its last range of high-end graphics cards. The HD 4870, HD 4850, and HD 4870X2 all produced impressive performance and most importantly delivered it at a decent price. However, relative prices are one thing but if you simply can’t afford or can’t justify spending more than £50 just to play the latest 3D games then you’ll be wanting something a little cheaper. Something like this ATI HD 4670, in fact. 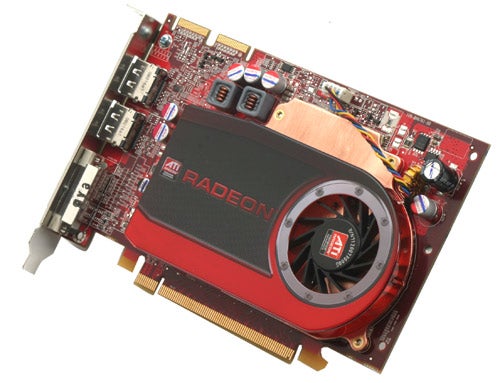 It’s based on the same basic design features of the Graphics Processing Unit (GPU) chip that lies at the heart of the 48×0 series of cards but, as you would expect considering its price, there’s just less of all the processing bits inside. So, rather than 800 stream processors, the HD 4670 features just 320 and instead of 16 ROPs it has only 8. It also uses the more conventional GDDR3 memory found on the HD4850, rather than the super-fast GDDR5 memory used on the HD 4870, and the GPU talks to this memory over a 256-bit interface. Core clock speeds and memory speeds also differ though these aspects will vary depending on the exact configuration the card manufacturer’s release – expect there to be plenty of exotic overclocked versions.


As well as the HD 4670, there is the HD 4650, which uses the same smaller GPU but along with lower core clock speeds, the memory type has changed to DDR2 and the interface has been reduced in width to ”just” 128-bit.

In terms of features there’s little to distinguish the HD 4670 from its more powerful brothers. As well as the 3D graphics processing elements, you get ATI’s Universal Video Decoder (UVD) and Avivo video that accelerate and improve the quality of video playback. There’s also support for the latest edge-detection anti-aliasing mode, which offers by far the best image quality we’ve seen on any graphics card.


If you’re looking to spread the cost of your graphics upgrade, you can buy one of these cards now then in a few months time you can buy another one and take advantage of CrossfireX to use the power of both cards together – assuming you have a CrossfireX or SLI capable motherboard, of course.


We’re always a little sceptical of these dual/multi card configurations, due to their potential problems with compatibility and stability, and if you had a choice of getting two cards or a single one for the same price we’d always recommend going for the latter. However, in such a price-sensitive market this route makes sense. I’d certainly rather buy one card now and have some gaming ability in time for Christmas, then save for a few more months and improve performance further, rather than save the entire time.

The card itself is very short so it should fit in just about any non-low-profile case. Likewise, the HeatSink/Fan (HSF) doesn’t protrude into the next slot so there’s plenty of room for other expansion cards. However, this does mean heat from the card isn’t allowed to escape so your case will have to be well ventilated elsewhere to keep things cool.


When I first saw the cooler I was rather worried it would be pretty noisy as the tiny fan span itself silly trying to keep the card cool when under load. However, wrong I most certainly was proved. While it’s by no means silent mid-gaming session, it is far from disturbing and is to all intents and purposes silent when idle or watching video. 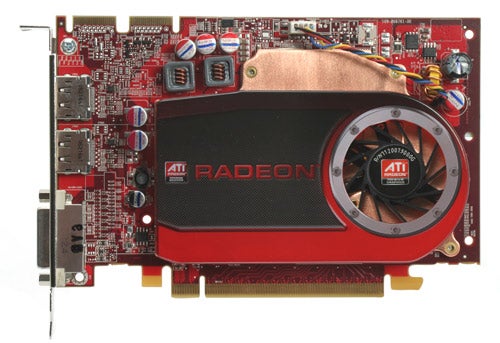 Along the top edge are the two connectors for using the HD 4670 in CrossfireX. Just one connection is needed for two cards whereas the second connector is needed if you add a third card.


Simplifying things further is the HD 4670’s power requirement. It also doesn’t require any extra power connections as it draws all the power it needs from its PCI-E 2.0 slot. Essentially, so long as your computer’s motherboard has an x16 PCIe-Express 2.0 slot you’re good to go. 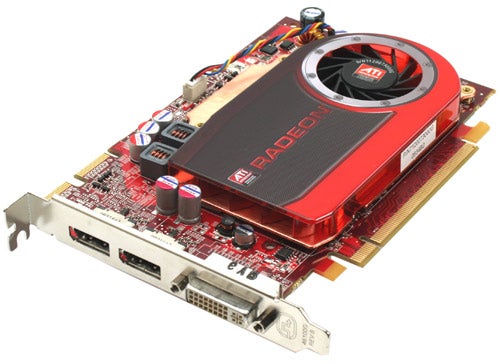 Our test sample provided by ATI came with an interesting output configuration. Rather than the conventional dual-DVI-I outputs, it has a DVI-I and two DisplayPort sockets. As well as giving you the ability to connect three displays to a single card the use of this new (soon to be standard) connection will be useful for when you do eventually upgrade you monitor. If you do still rock an old CRT monitor with a VGA connection, a DVI-to-VGA dongle on the single DVI-I output will sort you out.


Now the biggest contender for your money at this price point is nVidia’s 9500GT. This card actually has almost identical components to nVidia’s previous generation 8600GT so it seems performance is unlikely to blow anyone away. Nonetheless we’ve put one up for test so we’ll see how it goes.

For testing we ran through our usual set of gaming tests and also measured the power draw of our test bed with each card installed. The test setup is as follows: 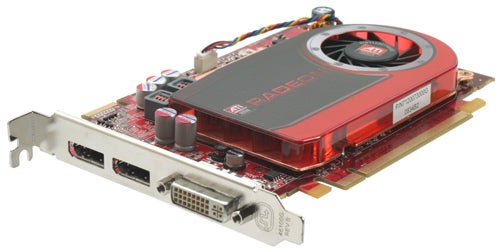 Installation and testing passed without a hitch and we experienced no stability problems whatsoever. The card did become quite hot to the touch but we’ve come to expect that from ATI’s cards and it has yet to cause a problem.


As for performance, the HD 4670 held up very well. Framerates were consistently within a ‘playable’ range for all games except Crysis where, at the settings tested, it struggled to hit 25fps. However, turning down the graphical settings a little should give you playable performance even in this most demanding of games. Most importantly, the HD 4670 distinguishes itself as being by far the best performer for its price.

Power consumption is of course a great concern in the current economic and environmental climate so it’s good to see the HD 4670 does its bit as well. We did note that the 9500 GT consumed a little less power though. Nonetheless, you can rest assured that adding an HD 4670 to your system won’t suddenly triple your electricity bill.


We really like the ATI HD 4670. If you’re seriously into your gaming and have an enormous 24in (or above) monitor, then it’s probably not for you. However, if all you have is a modest PC and a modest upgrade budget and you fancy a bit of 3D gaming fun, this card is the perfect option.