What is the Asus Zenbook Flip UX360CA?

With the Zenbook Flip, Asus has combined its knack for thin and light laptops with a 360-degree hinged screen design to make a high-class convertible laptop. The Zenbook is expensive, but it’s one of the finest examples of a convertible laptop around.

My review sample had 8GB of RAM, a 512GB SSD, Full HD display and an Intel Corel m5 processor, but there’s also a £750 option with a Core m3 and a 128GB SSD. The more expensive model offers better value, but the cheaper version has a decent specification for the price.

There’s a very similar model, the UX360UA, that’s priced from £800. It’s largely the same in terms of design and build, but you get a full-fat Core i5 instead of the Core M model reviewed here. Comments on the design, build and screen will still be relevant, but performance and battery life will differ signficantly between models.

Take the Zenbook Flip out of the box and immediately it looks like an expensive product, with its aluminium shell typifying Asus’ best ultraportables. The star of the show, though, is the touchscreen display, which folds 360 degrees into tablet mode.

Although the tablet mode is never going to make the Asus as easy to use as a conventional tablet, putting it in ‘Tent’ mode with the laptop standing on its edges is particularly useful for watching movies on a plane or train and streaming video in bed.

The Flip is remarkably thin at just 1.37cm, yet has plenty of ports and features. On the left of the device, you’ll find the power button, volume rocker, SD card slot and a single USB 3.0 port. Move to the right and you’re greeted with a 3.5mm combo jack, Micro HDMI, USB Type C, USB 3.0 and DC power input. 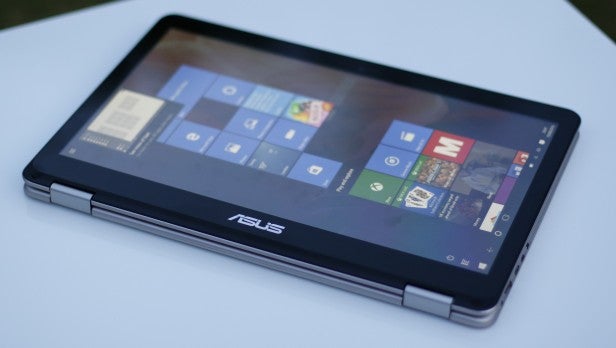 I have two gripes here, the first being the lack of any port that can drive an external high-resolution display – a Thunderbolt 3 port would have been very welcome. The second is aimed at the volume rocker, which isn’t easy to use and I found that I kept hitting the power button by mistake.

While an Ethernet adapter isn’t provided, you do get a HDMI-to-Micro HDMI adapter included in the box, so you can hook up to an external monitor straight away.

At just 1.27kg, this is a supremely light machine. It might not be as light as Asus’ other Core M-powered Zenbook UX305, but it’s close. You won’t mind using this machine as your partner on the road.

For such a thin device, its keyboard is a real treat to use, with plenty of travel on each key. Function keys are easy to press, with most of the functions you’d expect. It seems slightly wasteful to have both a volume rocker and dedicated function keys, especially when Asus hasn’t made room for media control buttons such as Play and Forward. My review model’s keyboard wasn’t backlit, either, which is surprising and disappointing on a device costing this much. One other thing to note is the small size of the arrow keys, but aside from that the keyboard is pleasant to use and well laid out. 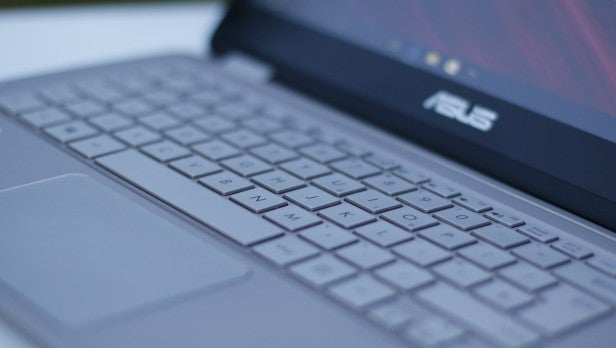 The trackpad is also good. It’s fairly large and has a smooth finish. Tracking accuracy is on point, making navigating small menus easy. Windows 10 features an array of multi-touch gestures, with the Zenbook handling them well. When combined with the touchscreen, you have an excellent arsenal of ways to interact with your machine. The only real weakness is in the button clicks at the bottom of the trackpad – they aren’t bad by any stretch of the imagination, but there were a few missed clicks during my testing.

On paper, the 13.3-inch screen is very good. In practice, it’s a mixed bag. The vibrant IPS display delivers rich colours and strong contrast, and the touchscreen is responsive. Viewing angles, too, are good and everything is pin-sharp on the 1080p display. 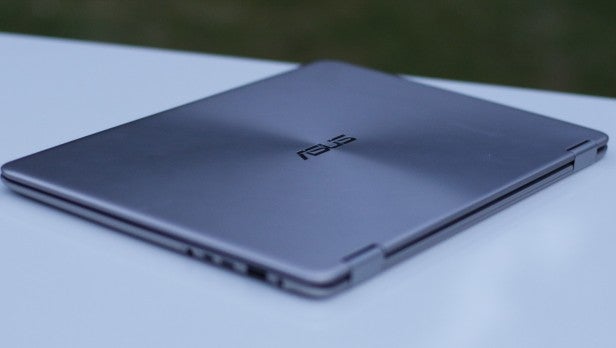 Sadly, though, cracks start to appear once you use the Zenbook for several hours. The main issue I have is with the reflectivity of the display. Even in modest light, the screen picks up the room around you, which can be distracting, and it’s far worse in bright environments. Normally this wouldn’t be a huge problem, but I found the display wasn’t bright enough to overcome the glossy screen. A smaller issue is that the screen has a slight haze to it – this is something that’s often found in matte displays, rather than the gloss finish here.

In the general scheme of things, these aren’t huge problems and wouldn’t put me off buying the Flip, but people who want a top-quality screen for working outside may wish to look elsewhere.

Another problem is with the hinge the display rests on – it’s a little bit too flexible for my liking, and I wish it was stiffer. Again, it’s not a huge problem, but when moving around with the laptop open, the screen will often slip to a 180-degree position, which can be quite annoying. 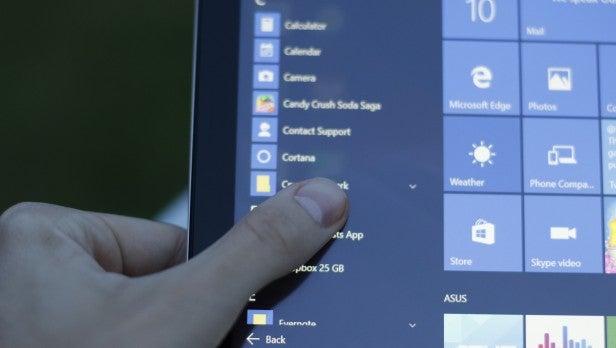 As for the audio quality, the Zenbook Flip has a pair of small stereo speakers on its underside. This is problematic when used in tablet mode, as the speakers are completely blocked, and the resulting sound is muffled and generally unimpressive.

When used in laptop mode, though, they’re much better. The speakers provide a fairly big sound for such a slim device, and the audio is very clear with a respectable amount of detail. It provides a performance that’s more than just listenable, which is a great surprise on a device like this. As with all ultraportables, headphones or speakers are a must for serious use.

Powered by Intel’s M-series processors, the ZenBook Flip is aimed at users who want a thin and light device, while still being able to cope with everyday tasks without issue. The m5 in my review sample coped with everything I threw at it, whether it was word processing, web browsing or video playback. Even with lots of tabs and programs open, the processor performed admirably, especially when you consider the laptop uses passive cooling only – there are no noisy fans here. 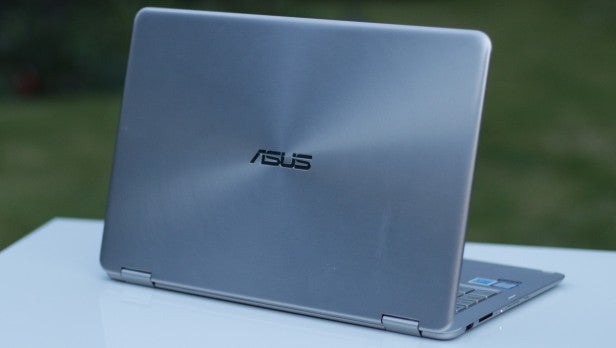 The notebook managed Geekbench scores of 2,335 (single-core) and 4,723 (multi-core), with a PCMark Home score of 2,274, which compares very similarly to its competition. Real power users will want to look at something with a Core i5 or i7, but you’ll lose out on the charms of a thin and light laptop.

Related: Everything you need to know about Intel Core M

Give this machine a miss if you want to play games on your new laptop. The integrated GPU has come a long way, but even in Minecraft on the ‘Fast’ presets, you’ll be unable to get a capped 60fps. This is the sort of machine to use for lighter, much older games. 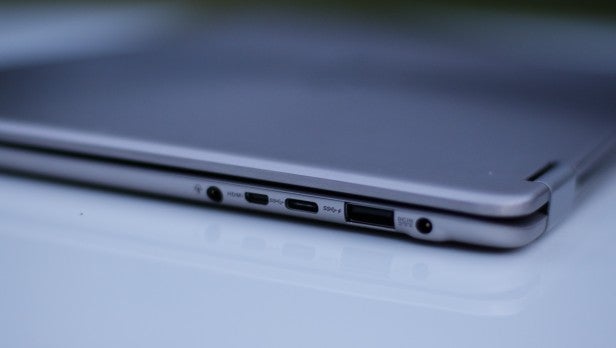 There are a couple of smaller issues present on the Zenbook. The first is that the SSD is limited to Sata 3 speeds rather than superfast M.2 PCIe, with read speeds recorded at 494MB/s, and writes at 345MB/s. This is still speedy enough and completely outclasses devices with hard disks, although at this price a faster SSD would have been most welcome.

While it’s hard to test thoroughly, the Wi-Fi range seemed to be reduced compared to my other laptops and mobile devices.

Despite the impressive performance, battery life is reasonably good. The Zenbook Flip managed 7 hours 37 minutes at 57% brightness in the Powermark benchmark, running through a cycle of 5 minutes of video and 10 minutes of web browsing. In my real-world testing, I found that I had around 20% depletion after 2 hours of web browsing, which should get you a full working day of use and a little bit extra for the commute home. If you opt for the more powerful m7 and higher-resolution screen options, you should expect battery life to be reduced. 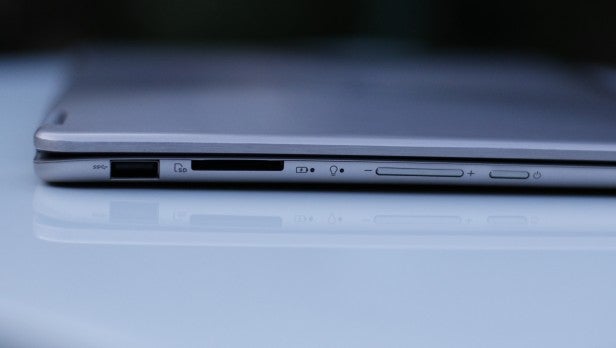 Should I buy the Zenbook Flip?

It’s great to see a notebook that offers more than just a lower price. The Zenbook Flip is no doubt a luxury product, with its ultra-thin design, luxury feel and solid performance. Even if you don’t need the touchscreen, it’s a product that’s a worthy competitor to the Apple Macbook.

There are a few things that hold it back a little, with a weaker hinge than I’d like and a highly reflective screen. But as a complete package, the UX360CA proves that it’s possible to have a fantastic ultraportable notebook with minimal compromise. 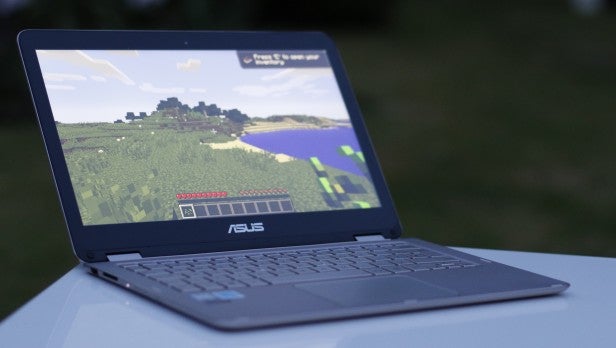 However, if a convertible screen isn’t important to you, then you’re paying a big premium over a more conventional laptop such as the more powerful and slightly lighter Lenovo Ideapad 710S.

A svelte hybrid laptop with a high price to match.