Last sighted a couple of months ago at Computex, the Xonar D2 is Asus’ brazen attempt to take Creative head-on. Asus isn’t pussy-footing around with the Xonar either, this is intended to be a serious contender and as such it’s a card brimming with features and promising a high quality audio experience. Can it deliver? 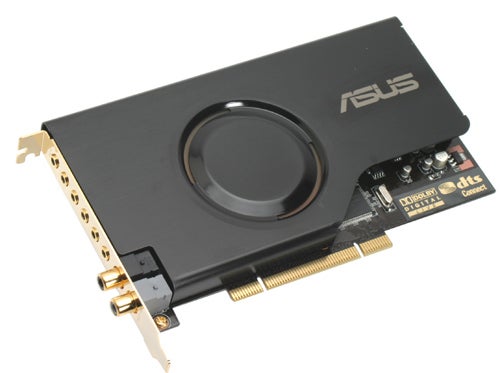 First impressions are excellent, it’s an impressively heavy card with a large metal shield covering most of the card, to help protect from electronic interference. There’s a range of audio cables including three stereo mini-jack to twin phono for connecting the analogue outs from the card to an amp as well as an optical cable with adapters (as the card combines S/PDIF with optical audio outs). I was pleasantly surprised to find a separate MIDI bracket and MIDI cables. Despite USB now taking over from MIDI interfaces, it’s always gratifying to have it, although you will need to use up a whole rear bracket just for this one connection.


Where some of the higher-end Creative cards come with the functional (and perfectly acceptable) Cubase SE, Asus has provided a generous package that includes ‘lite’ editions of Ableton 6, Sonar and Project 5 together with Cyberlink Power DVD 7. There’s no sample editing program in there, but there are plenty of free ones on the web, such as Audacity. Unfortunately, this review model didn’t include the software so I can’t say how these cut-down versions compare to the full commercial releases. 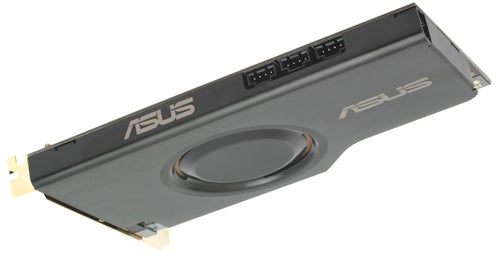 As is common with even the budget cards now, there’s a wide range of surround options available including up to 7.1 analogue out, Dolby Digital Live, Dolby Pro Logic IIx (for upmixing stereo or even 5.1 to up to seven surround channels), Dolby Headphone, Dolby Virtual Speaker (pseudo-surround from stereo speakers), DTS Connect, DTS Neo:PC and DTS Interactive. The range of surround options and the inclusion of Dolby Digital Live is one area where this card differentiates itself from the X-Fi.


The card also offers ASIO support. Whilst once restricted to cards designed for the audio production market, ASIO is now much more widespread. It’s a low-latency driver intended to provide a high degree of responsiveness for music making applications, where timing is crucial (it’s no good playing a note on a keyboard only to hear it two seconds later).

Other included features are EAX 2, which is the bare minimum for a gaming sound card but all that can be offered since later versions of EAX are exclusive to Creative. The card also supports Open AL and what ASUS call ALT DRM backup, which lets you record what you are hearing, circumnavigating DRM restrictions.


Before getting to what the thing actually sounds like, you need to know about the most important design element of the whole card. Every output on the back shines with a different colour. For totally superficial people like myself, it’s almost worth the squids just for this. So…. pretty… 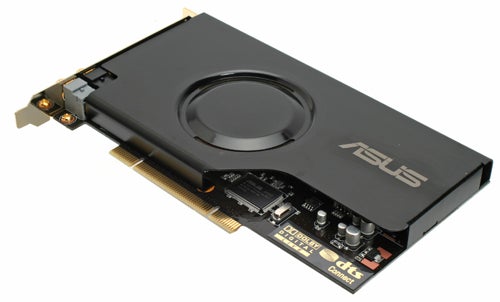 There’s also a practical purpose to the illuminations as it provides a reference to the function of each of the mini-jack connections when you’re scrambling around the back of your computer in the dark (although, dear Asus, it would have been sensible to have actually included a description of the colours in the paper manual, there’s no point being only half user-friendly).


It’s always good to know what converters a card uses, it’s easy to make all kinds of claims about audio quality but without decent chips to record the sound coming in and convert it back out from digital to analogue, any claim about quality should be treated suspiciously. The card uses the Cirrus Logic CS5381 analogue to digital converter, a genuinely a high-end audio chip that can be found in pro-audio gear costing thousands of pounds. The digital to analogue chip is also well regarded. It’s not just about converters though, clocks are just as important and much more expensive, which is why budget gear such as this card will never compete with high-end audio equipment, but on paper the spec is more than sufficient for most people.

The mixer software does a reasonable job of presenting the myriad of surround options, although as is often the case, the eye candy gets in the way of legibility with small text and colours that stand out poorly against the background. There really should also be a way of linking the master left and right level sliders and I found the large master volume knob rather sticky and temperamental but these aren’t serious niggles. At least there isn’t any Creative-style bloatware with a reasonable 60mb specified install space requirement.

Running the Right Mark Audio Analyzer utility (which in a sign of its confidence of the card’s quality as Asus includes it on the driver CD), gives perfect results. With a signal to noise ratio of -118dB at 192Khz, 24-bit when performing the test according to Asus’s detailed instructions, the card delivers on its claims. The RMAA results are not as strong as Creative’s X-Fi offerings, which I reviewed exactly two years ago but it’s not only about numbers. 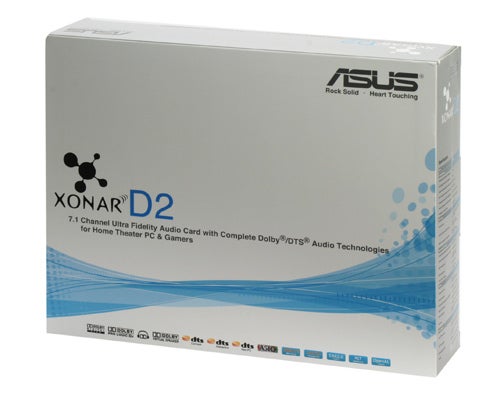 As an informal test to measure background noise in a real settings, I use a sample editor (such as Adobe Audition), set the recording input to be line level and turn it up to full. The Asus gives the best result I’ve ever seen, with a very low background noise level of just -106dB.


Listening to a piece with a wide dynamic range is a satisfying experience with a well-rounded and nicely defined sound. It’s a pleasurable experience which is the only factor that matters.. Remember though that if you use Dolby Digital Live to connect the card to an amp digitally, the quality of the converters on the amp you’re using will be an important factor and of course Dolby Digital is a compressed audio format, so if quality is important, buy some decent cables and use the analogue outputs.


If you’re after a basic home theatre card, there are cheaper options that give decent results, such as the Aureon 7.1 PCI previously reviewed. Similarly, I wouldn’t recommend the card for gaming since with only EAX 2, it offers nothing that any other generic card can supply (apart from the quality of audio output of course). With a comprehensive PDF manual (marred by the usual translation mistakes), Vista drivers and a thoughtful design, this is an impressive and capable card. If you’re after a solution that offers a high quality home theatre experience or want something for entry-level music production, the Xonar offers a strong package.