Asus has traditionally steered clear of consumer NAS appliances and the WL-700gE represents its first stab at this market. However, it’s more than just a box with a hard disk inside as it combines a router, an integrated four-port Fast Ethernet switch, SPI firewall, wireless access point, web, media and FTP servers, a message board and even facilities for networking USB webcams and adding motion detection.


When it comes to design the WL-700gE is another clinical white plastic box – Apple and Netgear have a lot to answer for. However, it does look good on the desktop and you get a very solid plastic stand for placing it vertically. The appliance is supplied with a 160GB Hitachi Deskstar IDE hard disk installed in a metal tray which can be accessed by flicking back a couple of tabs and removing the lid. Don’t think about changing it for a larger model though as the tray is protected all round by warranty invalidation stickers.


Asus is determined for you to hit the ground running as it provides a complete toolbox of installation and configuration utilities. Its EZSetup Wizard makes light work of initial configuration as you press the EZSetup button on the back of the router, load the utility and watch it search for the appliance. On first contact it sets up wireless access, forces you to choose from WEP or WPA encryption and auto-generates a key. Next up is Internet access where you can pick from an Ethernet enabled cable or ADSL modem, PPPoE, PPTP or static IP addressing. Drive mappings can be added immediately and the appliance is then set up ready for use. 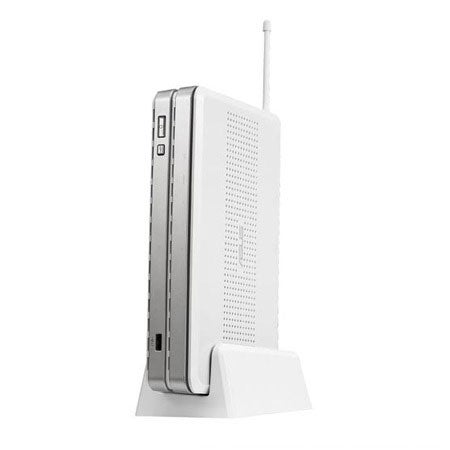 The main logon screen provides four options where you can access the appliance’s configuration interface, browse shares, fire up the personal web site and run the Download Master. The latter looks interesting as it supports HTTP, FTP and BitTorrent downloads to the appliance and can be left running without a PC switched on. It also adds a couple of extra options to the standard HTTP right-click download menu for sending files directly to the appliance. However, the only way we could get it to work was to use the Download Master run from the logon screen and it would occasionally pause for no reason during our FTP download tests.


The appliance provides a web server with a set of predefined pages where you can post messages, display your photo albums and add favourite links. A separate export utility makes light work of adding pictures as it takes all selected images, sends them to the web server and even creates thumbnails for them.

The web cam feature has a lot of potential but ultimately proved to be the most disappointing. Only supported USB cameras can be used but Asus’ web site doesn’t say which models although we had some success with a Logitech QuickCam Pro. You can pick from 320×240 or 160×120 pixel resolutions, choose a refresh rate as quick as one second and decide whether to allow access from the LAN and Internet. On first contact the application will load an ActiveX control but only the preview page worked and the image was poor by IP camera standards. Pointing a browser at the designated ActiveX port number just produced pages of garbage. Motion detection can be scheduled for specific periods of each day and when triggered will download captured images to an email address of your choosing. We found this actually worked perfectly although the images attached to the message were of poor quality as well.


Basic network shares are easy enough to create and access can be allowed for Windows, Unix and Linux clients as well as over FTP and HTTP. Access restrictions can be applied to selected shares with a local user database and the appliance can become a member of an NT authentication domain. In keeping with most small NAS appliances the WL-700gE functions as an iTunes server. There’s nothing to do here except activate this service whereupon a default folder is created for storing your tracks. Open the iTunes client and the appliance automatically appears in the source list. 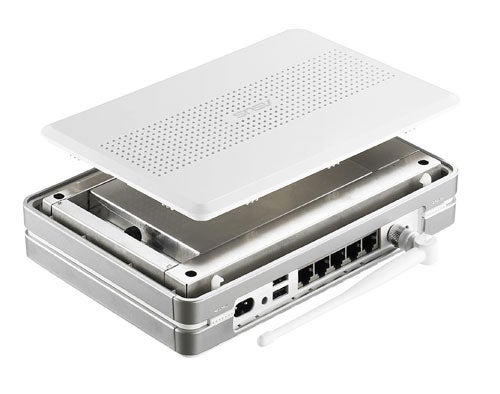 The wireless access point offers both WEP and WPA encryption and supports Asus’ BroadRange technology. Previous tests run on the Asus WL-550gE returned modest results that never went above 30Mb/sec although we did observe BroadRange having an impact at greater distances with speeds only dropping to a low of 26.5Mb/sec. If you slot a USB storage device in the front port and press the Copy button on the front panel then all the contents of the device will be automatically copied to a predefined folder on the appliance. We successfully tested this with a 512MB Buffalo FireStix and watched the appliance copy 383MB of data in less than two minutes.


For the sheer number of features the WL-700gE scores highly as packs an awful lot in to its modest dimensions and offers them at a reasonable price. The majority of these worked well during testing although the Download Master and web cam functions are poorly implemented and the user documentation could be more helpful.

Asus provides plenty of assistance is getting the appliance up and running.

The wireless AP provides good security and can be activated to a daily schedule.

Different media services can be individually activated and will create a set of default folders.

The Download Master supports HTTP, FTP and BitTorrent but only worked for us when run from the web interface.

The web server provides your own personal web site with message board and photo album.