What is the Asus VivoBook L403?

The Asus VivoBook L403 is the company’s latest big-hitter for the back-to-school season. Equipped with a specification that will easily handle all the basic schoolwork you can throw at it, and a battery that will make it through a whole school day, the L403 is a student’s bargain.

The L403 looks more expensive than it is, with a brushed grey composite lid and wrist rest. Its 14-inch form factor means it weighs in at a backpack-friendly 1.5kg, while its 18mm thickness is, again, nice and baggable. Despite its low price, the L403 feels impressively robust. The screen suffers very little flex, and the wrist rest is also bend-free. The keyboard tray sags only slightly when typing, which is a sign of a laptop that has a very solid base. I wouldn’t be worried about shoving this device into a bag that occasionally feels the effects of a rush-hour crush.

Asus has been generous in terms of connectivity, too. You get a full-size HDMI port for connecting to external monitors, two full-size USB ports (one USB 3.0), a USB-C port (although without any of the benefits of faster, more powerful USB 3.1), a 3.5mm headset jack and an SD card slot. There’s one slight design oddity, though, and that’s the way the laptop lifts up slightly when you open the lid fully. This gives you a slight keyboard pitch, which is nice, but it also raises the laptop’s rear rubber feet off the desk, which means the device has a habit of being just a little bit slippery if you give it a shove. Cheap laptops live and die by their touchpads, so I’m pleased to report that the VivoBook L403 passes my quality test. Just. It’s cheap, so it doesn’t fulfil the Microsoft Precision Touchpad certification, but it does still support many of the most important gestures including two-finger scrolling, pinch-to-zoom and three-finger window management.

It’s sensitive in normal operation too, with clicks and drags working without issue. Even palm rejection is mostly quite good, although there were a couple of occasions where the pad sensed my hand while it was hovering just above it, which was a little weird. The keyboard is similarly good. There’s plenty of room and there aren’t any weird button omissions. You get full-size cursor keys, Page Up and Page Down buttons. The key-press action is decisive and predictable, and I had no issues picking up a decent typing speed. The keyboard isn’t backlit – but you’re unlikely to find such a feature at this price point anyway.

Unfortunately, after a few days of testing, the F3 key popped up and couldn’t be reset into place. It’s a tad concerning that a basic build quality issue raised its head so early, and while it’s probably bad luck, it’s disappointing nonetheless.

Impressively at this price, Asus has equipped the L403 with a 14-inch, Full HD screen. For years it’s been a very rare thing to find a budget laptop with a Full HD screen, but this trend is on its way out, with the Acer Swift 1 also taking the same route. It isn’t a good Full HD screen by any stretch; it can display less than 55% of the sRGB colour gamut, so is noticeably duller than more expensive laptops, and contrast levels are poor at under 350:1.

Viewing angles are also a bit of a problem, especially when viewed off-centre vertically (see images below). There’s noticeable colour shifting from the top to the bottom of the screen, but at least the hinge is quite adjustable, which minimises visibility problems. 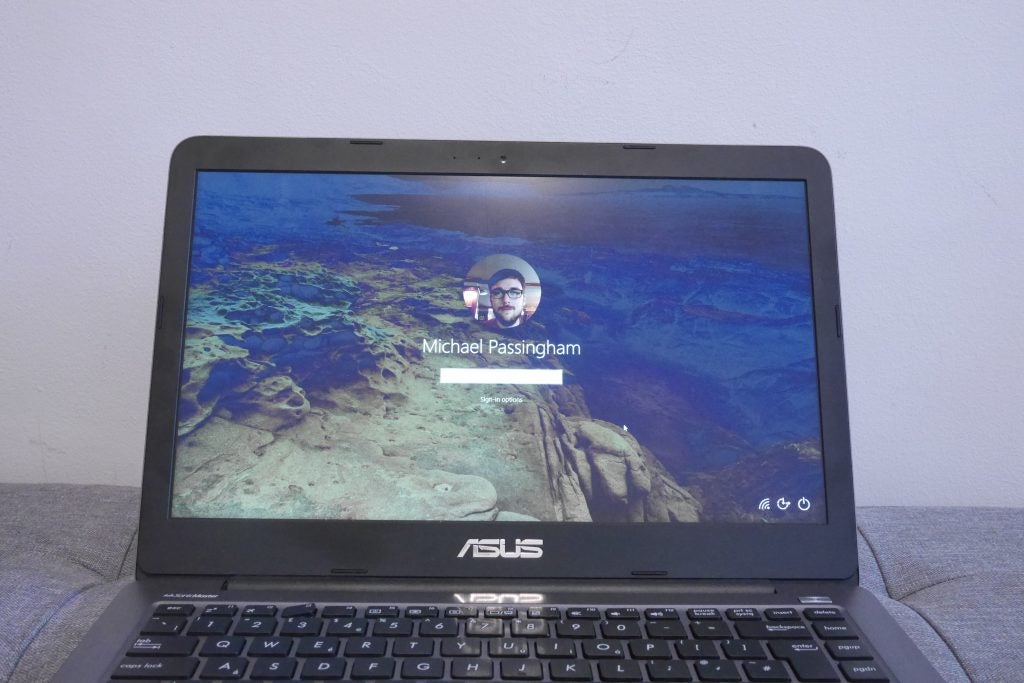 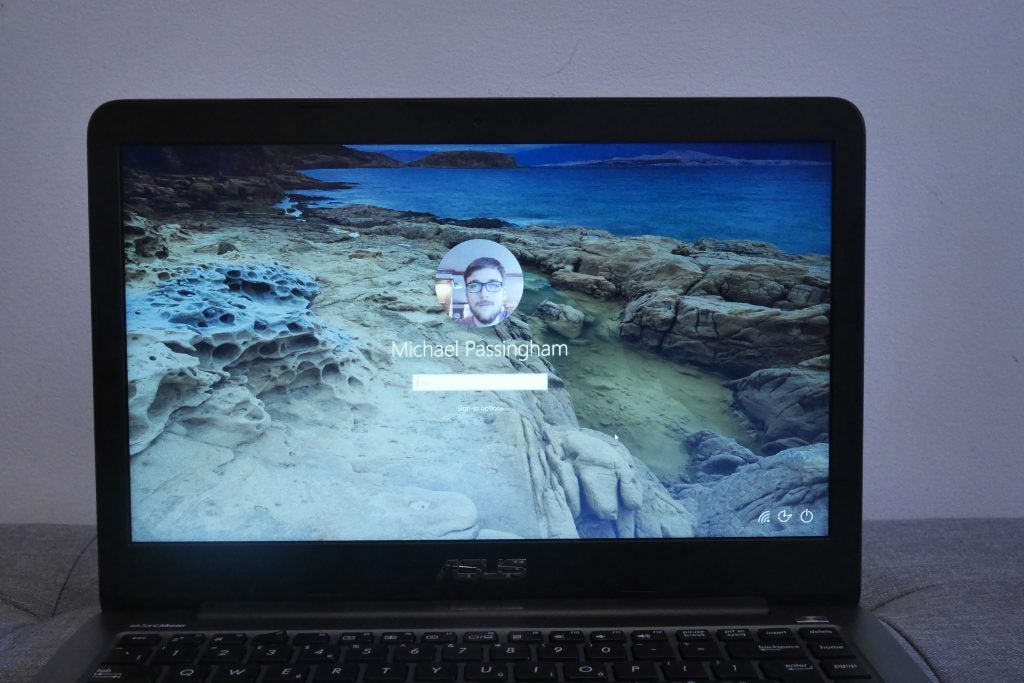 The speakers fire downwards from the front edge of the laptop, and are fine but nothing exceptional. There’s next to no bass and sound is a bit messy; but dialogue is clear and music is acceptable in short bursts. You’ll want headphones or speakers for longer bouts of listening, though.

The webcam, meanwhile, is pretty poor. Even in well-lit rooms, faces look dingy and blotchy. It’s perfectly usable, but not a brilliant experience. The same largely goes for the microphone, which happily picks up voices and does an acceptable job of minimising background noise.

This laptop, like the Acer Swift 1, prioritises build and screen resolution over performance. The Pentium processor brand may sound like a hark back to the early 2000s, but Pentium in 2017 is very different to previous years. The N4200 in this laptop has four cores running at a base clock speed of 1.1GHz, which sounds truly dreadful. Fortunately, the processor’s maximum speed is 2.5GHz, which is where it actually spends the majority of its time. The L403 is also equipped with 4GB of memory and a 64GB eMMC flash storage unit, much of which is occupied by Windows 10. It would be an exaggeration to call the L403 fast. Even modestly fast, in fact. However, if you buy this laptop knowing you’ll only be using it for web browsing with a couple of tabs open at a time and Microsoft Word running in the background, it will serve you fine. You’ll even be able to make minor tweaks to photos using Windows’ built-in Photos app, but if your ambitions go beyond that then you’ll have to consider a more expensive laptop.

You can at least play Minecraft Windows 10 Edition, which was a pleasant surprise.

With a processor that only takes sips of electricity, this laptop can last a full working day with the screen at half brightness. In Trusted Reviews’ Powermark run, which is a mix of web browsing and video playback, the L403 lasted 8hrs 55mins, which is superb. In everyday use, battery usage was of little to no concern; I felt confident that even if I started working on a piece with battery levels below 15%, I’d still finish my task with time to spare. Should I buy the Asus VivoBook L403?

The L403 is a solid, budget 14-inch laptop, especially given its £300 price. A Full HD screen and solid chassis make it a decent choice. However, for £50 more you can grab the Acer Swift 1, which comes in lighter, smaller and offers even better build quality along with a fingerprint reader. However, its more compact size does also mean it offers less in terms of the roominess provided by the L403’s 14-inch chassis.

A bargain 14-inch laptop that’s at home in any schoolbag.