Until recently, affordable consumer laptops were a compromise: either you got a small laptop (i.e. with a screen of 13in or less) with good battery life, or a big one (15.6in and up) with merely decent battery life at best. There wasn’t much choice if you wanted both a large screen and excellent battery life, but Asus looks to be joining Acer’s Aspire Timeline 5810T in offering just that. In fact, it betters Acer’s stated eight-hour battery life by a considerable margin, claiming up to an incredible 12 hours! That’s especially impressive considering the UL50Vg’s large 15.6in screen size, so let’s see if Asus’ latest can live up to the hype. 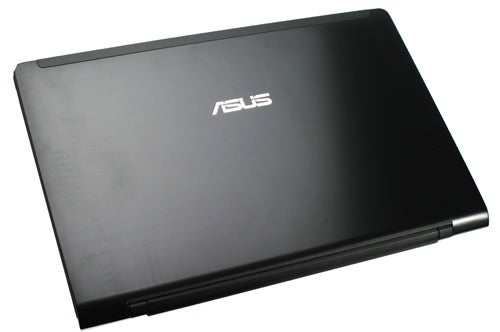 With the laptop closed, first impressions are certainly positive. At its thickest point it measures 26.4mm – a little over an inch – and like the aforementioned Timeline range, its lid is brushed aluminium. This not only looks great in both the black and silver versions, but also lends a welcome measure of extra durability, though there’s just a hint more flex in the lid’s centre than we’d ideally like. The angled back edge is also a nice touch.


Opening the UL50Vg up, however, is like a bucket of cold water in the face. Though the bitty hinge is not exactly pretty, the main offender here is that the entire inside is constructed using glossy black plastic, and yes, that includes the palm-rest and touchpad. So it might look good initially, but unless you wipe it down every single time after use, fingerprints, dust and grease marks will soon generously adorn the interior (though the grime won’t be as obvious on the silver models in the UL series). 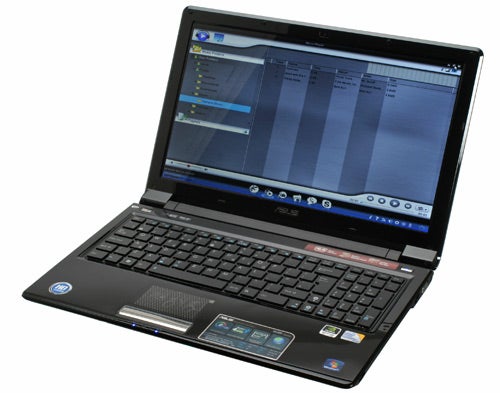 We simply can’t emphasise enough what a bad idea glossy working areas are on a laptop. Moreover, it comes as a nasty and unexpectedly cheap looking surprise after seeing the metal lid. Chromed power and touchpad buttons don’t help much either, since they’re just as partial to fingerprints as the rest of the inside.


At least the isolation-style keyboard is matt black, which contrasts nicely with its surround. However, performance-wise it’s a bit of a mixed bag. On the plus side, keys are well-spaced and large enough to be comfortable, with a smooth, pleasant surface, while layout is pretty much spot-on and includes a full number-pad. 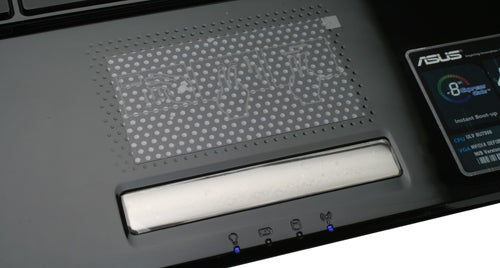 However, a minor complaint is that you’re obliged to use keyboard shortcuts for everything as there are no dedicated function buttons or touch-controls. Far more serious, though, are the keyboard’s feedback issues. The actual keys themselves offer good response and a nice degree of travel, but noticeable flex combines with a distracting rattle (especially towards the left edge of the keyboard) to detract from the experience.


Moving down to the multi-touch touchpad, it’s large and responsive. Its heavily textured surface does provide a good feel and differentiates it from its surroundings, but at the same time is literally wearing on your fingertips. The chromed rocker switch below it is also on the stiff side.

Connectivity on the UL50VG is pretty standard for a slim 15.6in laptop. On the right you’ll find a card reader (that will handle SD/HC, MMC and MS Pro/Duo), HDMI video output, two USB ports, plus microphone and headphone jacks. To the left, along with the DVD-Rewriter, we have a third USB port, VGA, and Gigabit Ethernet.

Internally is where things start to get interesting. The CPU at this Asus’ heart is an Intel Consumer Ultra Low Voltage (CULV) chip, specifically a Core 2 Duo SU7300. This frugal processor normally runs at a relatively pedestrian 1.3GHz, which should be adequate for most tasks though it may struggle with intensive multitasking and other heavy load scenarios.


However, Asus has implemented a minor overclock taking it up to 1.34GHz, and the UL50Vg’s BIOS gives options to overclock it by up to eight per cent. Both of these options are great to see, and the maximum overclock (1.4GHz) may just about let it handle workloads it would otherwise struggle with, such as running an application in the background while watching Full HD video (though GraphiX Boost would also allow the laptop to do this as video is GPU accelerated under Windows 7). 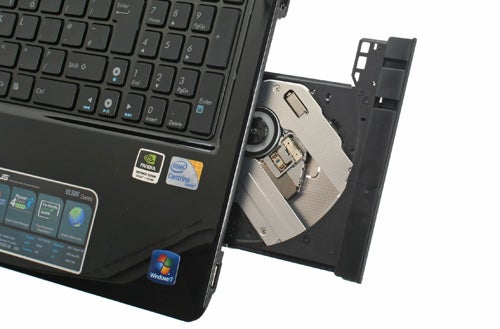 GraphiX Boost is the main highlight of Asus’ UL-Vg range, referring to switchable graphics. Usually, when it comes to mobile graphics one has to compromise; it’s either an undemanding integrated chip that falls over and dies at the first sign of 3D gaming, like Intel’s integrated solutions, or a discrete but power-hungry card that may give you the ability to run recent games but will quickly drain your battery.


With the UL50Vg you get the best of both worlds. Asus has complemented the Intel GMA 4500HD, which we know from experience gives great battery life, with an nVidia GeForce G210M sporting 512MB of dedicated DDR3 RAM. The latter is not quite worthy of being called a gaming card, but it’s certainly up to playing older titles at decent resolutions. Just to give you an idea of the difference, it returned a silky-smooth 50.5fps in ”TrackMania Nations Forever” (at 1,366 x 768 and Medium Detail), where the Intel chip only managed an unplayable 15.5fps.

Best of all, you can switch between the two graphics cards on the fly with a chromed button to the top left of the keyboard. While a dual-card solution like this is hardly unique in the laptop world, it’s definitely underused and usually reserved for more expensive machines.

The rest of the UL50Vg’s specifications are inevitably a bit dull in comparison but that’s certainly not to say they’re poor. Memory duties are handled by 4GB of DDR3 1,066MHz RAM, while a very generous 500GB hard drive takes care of storage. The impressive specification list is nicely polished off by Wi-Fi (IEEE 802.11Draft-N) and Bluetooth V2.1 plus EDR, leaving you wanting for nothing.

Yet another nice surprise concerns the installed OS, as rather than the Home Premium version of Windows 7 you will find on most laptops, Asus provides Windows 7 Professional 64-bit. This means you get access to Windows XP Mode, encryption and enhanced network functionality.


Aside from being almost as reflective as a mirror, the UL50VG’s 15.6in, 1,366 x 768 screen is decent enough by laptop display standards. Viewing angles are acceptable and the greyscale tests revealed smooth gradations – with minimal compression between the levels – even at the light or dark ends of the scales (though this did vary depending on the viewing angle).

Furthermore there’s no sign of backlight bleed and banding is so minimal as to be unnoticeable. One caveat is that sharpness is somewhat less impressive than we’re used to, but you’ll only notice this if working with very small fonts (six points or less) or in other scenarios unlikely to trouble the average consumer. Overall then, it’s certainly good enough for daily use, whether work or play.


Integrated laptop speakers have seen dramatic improvements recently, with many now producing a degree of depth at audible volume levels. However, the UL50Vg’s Altec Lansing models are surprisingly disappointing considering the brand generally provides relatively impressive efforts. Mind you, they do get fairly loud, but distortion creeps in at higher volume levels and bass is weedy at best. Basically they’re usable for the occasional film, but if you have an external solution to hand you’re better off using that instead.

Naturally, one of the biggest considerations of any CULV laptop is its battery life. Unfortunately the manufacturer’s claims usually need to be taken with hefty pinch of salt, and as ever that proves to be the case here despite the high-capacity eight-cell (5,600mAh, 84Wh) battery.


With the discrete nVidia G210M graphics card enabled, we managed to get just over four and a half hours out of the UL50Vg in MobileMark’s semi-intensive productivity benchmark (40 per cent screen brightness), and an impressive three hours and 22 minutes for the DVD test at full screen brightness.


Switching to the Intel integrated GMA 4500HD improved on these results significantly, with six and a half hours for the productivity benchmark and four hours 43 minutes for the DVD test. 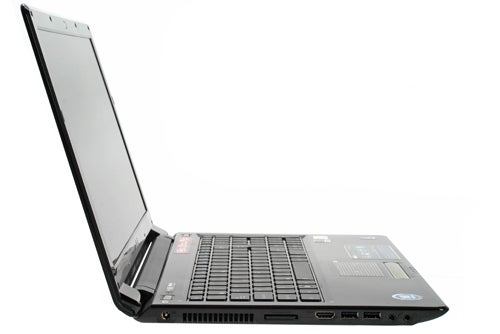 Considering that the UL50Vg’s screen is perfectly usable a tad below 40 per cent brightness and Asus’ Power4Gear application includes all kinds of power-saving tricks, it should be fairly easy to get seven hours out of this machine – but that’s still a far cry from Asus’ claim of up to 12-hours.


Finally we get onto value, where the £729 UL50Vg holds up quite well. Sure, there are far cheaper 15.6in CULV laptops available with the same amount of memory and storage, but throw in Windows 7 Professional, the slightly overclocked SU7300 processor and the dual graphics system and the price is very reasonable indeed. However, whether this laptop is actually worth getting is another matter. 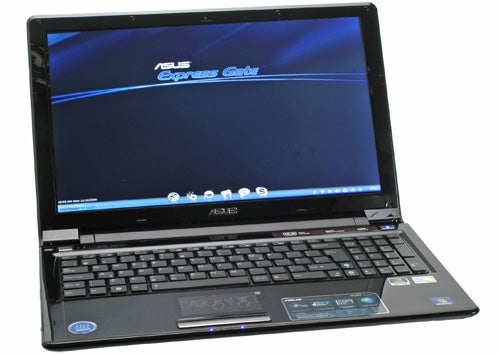 We like the UL50Vg‘s brushed aluminium lid, its relatively slim chassis and light 2.3kg weight, easy CPU overclocking, the hybrid GraphiX Boost system, the extensive BIOS and the inclusion of 64-bit Windows 7 Professional. Unfortunately the mediocre keyboard and touchpad, unimpressive speakers and glossy finish on the laptop’s entire interior put a damper on things, making this an option to be considered only if you want the specific combination of features it offers.


With its UL50Vg, Asus has created an impressive laptop that uses a range of technologies to offer a rare combination of power and portability for a very reasonable price. This makes it even more of a pity that some ill-considered design choices hold it back from a recommendation.

In the Stalker benchmark, it is important to note that even though the nVidia card appears to offer a playable experience with its 48fps average, minimum frame rates dipped as low as 2fps, making the game unplayable in the real world.

Battery life is excellent, though the Timeline model beats the Asus thanks partially to its weaker and more frugal Core Solo processor. Unfortunately neither of the Acer laptops completed the DVD test.