The original Asus Striker Extreme used the nForce 680i SLI chipset so it seems fitting that the Striker II Formula uses the new Nvidia 780i SLI chipset.


The main feature of 680i SLI was support for SLI with a full 16 lanes of the PCI Express bus for each card. However, in total 680i SLI actually supplied 46 lanes of PCIe, which would normally have been used for other expansion cards. Instead, though, some cunning motherboard manufacturers added a third graphics slot to take up the remaining eight lanes, although there was never an obvious application for this feature.


Recently though, nVidia unveiled 3-way SLI support for both the 680i and 780i SLI chipsets, which meant these old three-slot motherboards now had some use. All of which begs the question, what does 780i SLI bring to the party? The answer is in two parts; there’s support for Intel’s new 45nm Penryn processors as well as lots of extra bandwidth for the graphics. 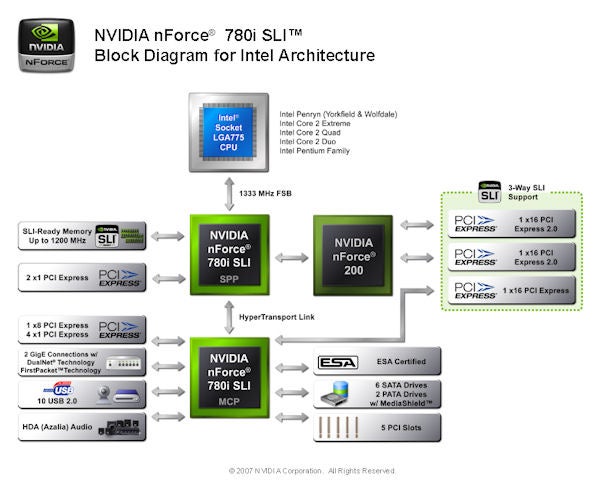 How, you may wonder, is this possible? It’s a good question and one that is answered by Nvidia’s block diagram which shows that it is probably more accurate to call the 780i SLI a chip collection rather than a chipset as it consists of three pieces of silicon, instead of the usual two. There’s the 780i SLI SPP (System Platform Processor) which connects the memory and processor and doesn’t have a great deal to do with PCI Express. Then there’s an Nvidia nForce 200 chip which does the heavy lifting for the three graphics slots and bringing up the rear is the 780i SLI MCP (Media Communications Processor) which adds a x8 PCIe slot and up to four x1 slots.

680i SLI motherboards were notorious for getting very hot and the original Striker carried a hefty passive cooling system that linked the two parts of the chipset with coolers on the power regulation hardware. A wise man would ensure that his case cooling was up to snuff to avoid problems with the motherboard overheating.


This is clearly an area that Asus has worked on with the Striker II Formula as it has changed the design of the cooling system from the original Striker and it now resembles the Intel X38 Maximus Formula that we referred to in our Maximus Extreme review. It doesn’t so much cover the various chips but instead joins them together in an amorphous mass that sprawls across a large part of the motherboard. The coolers are low profile and don’t get in the way of the graphics cards or the CPU socket. 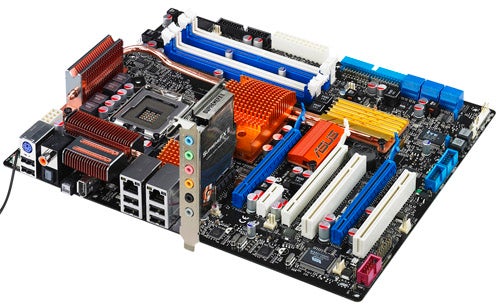 The original Striker had an LCD debug display on the I/O panel which was very handy but also a touch inaccessible as the only way you could read it was by crawling behind your PC on hands and knees. Striker II Formula takes this a step further with the LCD Poster which is an external device that looks rather like a small LCD clock. This is a great step forward and also frees up some space on the I/O panel which is used – yes – for part of the chipset cooling system. 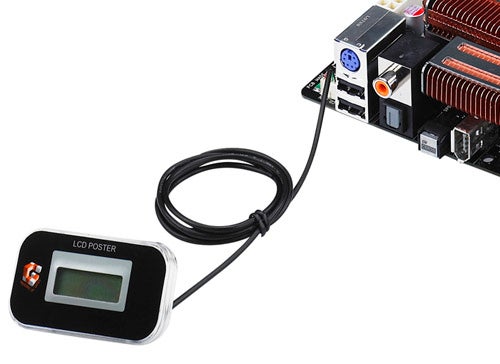 The layout of the Striker II is immaculate and packs in all of the features that you’d expect to find. There are six RAID enabled, horizontally oriented, SATA II connectors on the front edge, and a similarly “laid down” ATA133 connector sits along side. Also, the power connectors and floppy connector are positioned just how we like them – at the edges of the board. Across the foot of the board there are USB and Firewire headers and there’s a single bracket in the package with two USB ports and one Firewire to add to the six USB and one Firewire on the I/O panel. The only possible gripe is an absence of eSATA ports, which is something we’ve come to see as standard nowadays.


Integrated audio is handled by a PCI Express riser card which carries an ADI SoundMAX chip and six analogue mini jacks, with coaxial and optical connectors on the I/O panel. This arrangement we particularly like because it frees up space on the I/O panel and keeps the sensitive (to interference) analogue audio parts clear of the board.


It should be clear that you will have very little scope for using expansion cards if you use the Striker II with two graphics cards and if you go all out with three cards then you’ll have none at all. This isn’t necessarily a black mark against the board as there’s only so much room on an ATX motherboard. It’s worth bearing in mind though.

In the main the testing went well although we hit a snag along the way. The Striker refused to POST until the DDR2 memory was installed in single channel mode instead of dual channel. The fault was spelled out by the LCD Poster which stuck at ‘Mem check’ until we moved the memory around, despite trying a total of five models of memory in dual channel mode. There was a BIOS update to perform which went smoothly but it didn’t fix the issue with the memory and that has to be cause for complaint. 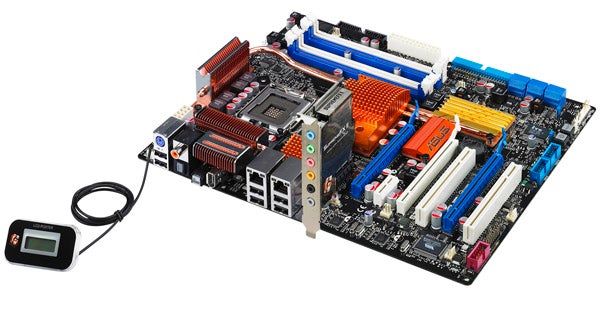 Other than that the Asus performed well and the test results were surprisingly good considering the memory was performing below par. As there was clearly a problem we left the memory speed on default setting and didn’t waste time bumping up the voltage to squeeze out some extra speed as there is clearly a more fundamental issue to address.


Starting with a Core 2 Extreme QX9650 we ran at the stock speed of 3.00GHz on a true 333MHz front side bus with an 8800 GT graphics card. The use of a quad core CPU threw up another unexpected result, in that the board initially refused to recognise two of the cores and it took a fair amount of rummaging around in the CPU settings of the BIOS to enable all four.

After that we cranked up the processor speed to 3.50GHz by raising the multiplier from 9x to 10x and also raising the front side bus to 350MHz. It was a mild overclock that worked flawlessly but the main point of interest was the motherboard cooling. We were using a quiet Zalman cooler on the CPU with no fans above the chipset coolers and the Northbridge end of things remained at a steady 45 degrees while the Southbridge was hotter at 60 degrees and it continued to behave with a second 8800 GT in SLI.


The Nvidia drivers suggested that we could use SLI without installing a hardware bridge between the two GT cards but there was a definite increase in performance when the bridge was installed.


Finally we ran a Core 2 Extreme QX9770 on a 400MHz front side bus and the Asus performed perfectly however it required a fan blowing on the chipset when we overclocked from 3.20GHz to 3.60GHz.

The Asus Striker II Formula is on sale at some outlets for a horribly steep £229 and that’s far too expensive but shop around and you’ll find it for £185 which is starting to look tempting. And yes, we are confident that Asus will fix the annoying problem with dual channel memory.