Let’s face it; for most of us routers aren’t an item we lust after, but rather a necessity of the ‘digital age’ as ours seems to have become known. Generally they also include an ADSL modem and come part and parcel with a broadband subscription – end of story. However, if your ISP is anything like mine that router isn’t exactly the most modern piece of tech in your house and with the growing prevalence of devices implementing Gigabit Ethernet (and warranting its use, a la NAS boxes) or 802.11n Wi-Fi it might just be time for an upgrade. 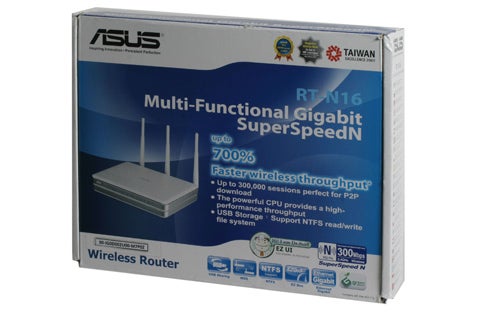 That’s where the Asus RT-N16 wireless router steps in; catering to the routing needs of more modern connections. If you want an ADSL or cable modem built-in, this isn’t the router for you, but there are plenty of situations when that shouldn’t be a problem.


Starting with its simplest aspects; the RT-N16 measures 216 x 162 x 41mm and weighs 470g – although I doubt the weight of a router has ever put anyone off buying one. At the device’s rear are its power input, a pair of USB ports, an Ethernet port for hooking up the RT-N16 to your ADSL or cable modem, four Ethernet ports for sharing that connection with the rest of your home, and last, but not least, three antennae, for spreading the router’s Wi-Fi about. That wireless comes, incidentally, in 802.11b, 802.11g and 802.11n (draft) flavours.


The two USB ports should prove useful when combined with the RT-N16’s ability to share files on an external drive over its network ports. That becomes particularly useful when used with the built-in Enhanced Download Master. Despite its slightly silly name, this is actually very useful as it enables the router to download files over ‘normal’ HTTP, FTP or – perhaps most usefully – BitTorrent and save them to an attached USB storage device.

This functionality becomes doubly useful thanks to the RT-N16’s provision of a UPnP media server. As such, media files stored on (or, more likely, downloaded to) an attached storage device can be streamed over the router’s wired and wireless connections to a compatible device. Using the built in AiDisk feature these files can also be shared over the ‘net, using a DDNS service provided by Asus – particularly useful if you need remote access to a file too large to email.

If you aren’t planning on using the RT-N16’s USB ports to connect external drives, or if there’s one free anyway, you might consider hooking up a printer, which can then be shared over your network. Also useful is what Asus calls EzQoS. Aside from forgetting that a ‘Z’ is pronounced “zed,” this purports to make setting up Quality of Service rules on the RT-N16 a breeze, ensuring that you can continue gaming and browsing the web unhindered, even with P2P downloads running in the background. 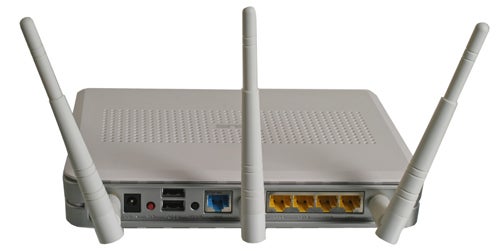 The RT-M16’s party piece is the way these functions are exposed in its user interface. Where other routers may resort to cryptic names and even more confusingly arranged menu structures, the RT-N16’s UI is impressively simplified, without being patronising. Plus, if you do want more control, the Advanced Setting menu allows for it.


Proving its name is more than just marketing hyperbole, EzQoS really does make QoS configuration simple. A progress bar-like indicator shows how much bandwidth is available to P2P transfers, which is then eaten away at with click on icons marked “Gaming Blaster,” “Internet Application,” “AiDisk,” and “Voip/Video Streaming.” Obviously if you enable all of these options P2P transfer speeds will suffer, but if winning a heated match in Modern Warfare 2, streaming a film to your PS3, browsing TrustedReviews, sharing files on your RT-N16 and downloading the latest Debian build are equally important to you, it’s achievable without any task suffering too badly. At least in theory. 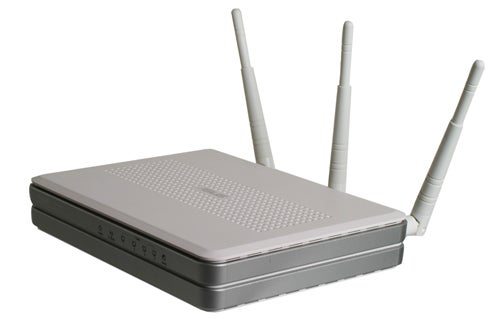 This ability to prioritise traffic is hardly exclusive to the RT-N16, of course, but I’ve never seen QoS so easily exposed in a UI before. Other basic, but oft needed, functions, such as setting your wireless SSID, or encrypting the connection (and adding a password) are similarly simple to tweak. The RT-N16 is definitely the easiest to use router I’ve ever come across.


The simple user interface of the RT-N16 wireless router might put off a few users that find it patronising but they’re missing out. All the functions you’re likely to need, and more, are easy to control and if you need to get to them, more advanced options aren’t hard to find. Products like this should ‘just work’ and that’s what the RT-N16 does.