The Asus ROG Swift PG259QNR offers sensational speed, delivering a fantastic experience for top-level esports players, with excellent image quality and robust physical design. It’s expensive, though, and the refresh rate and other esports features only benefit the best players.

The Asus ROG Swift PG259QNR is, on paper at least, the fastest gaming display in the world thanks to its incredible 360Hz refresh rate.

That’s a bold boast in a market full of exciting, high-end products. The 360Hz refresh rate on this panel is paired with Nvidia G-Sync, sturdy design, plenty of RGB LEDs and a 1080p resolution that will no doubt appeal to esports players.

But with a low resolution and small size, are there enough features here to convince non-competitive gamers to purchase this gaming monitor?

The PG259QNR is available to buy now from multiple retailers, including Overclockers, Scan, Box and more.

The Asus ROG Swift PG259QNR’s 360Hz refresh rate is a rare addition to a desktop gaming monitor, and it’s a sensational figure that comes into its own in the most demanding esports/competition scenarios. It’s combined here with Nvidia G-Sync, delivering a world-leading gaming experience – the PG259QNR is smooth, fluid and sharp, with stunning speed and free of tearing or stuttering.

If you’re into fast-paced games such as Fortnite, Warzone and CS:GO, it’s top-tier stuff. And if you’re a top-level competitive player in frantic esports titles, then a 360Hz display could deliver a small but critical advantage.

The 360Hz refresh rate does come with caveats, however. While its performance is undeniably spectacular, the gulf between 240Hz and 360Hz isn’t vast. The improvement is noticeable, but it isn’t going to transform your gaming in the way the jump from 60Hz to 144Hz would – or, indeed, like the move from 144Hz to 240Hz. These diminishing returns mean only high-level esports players will benefit from this display. 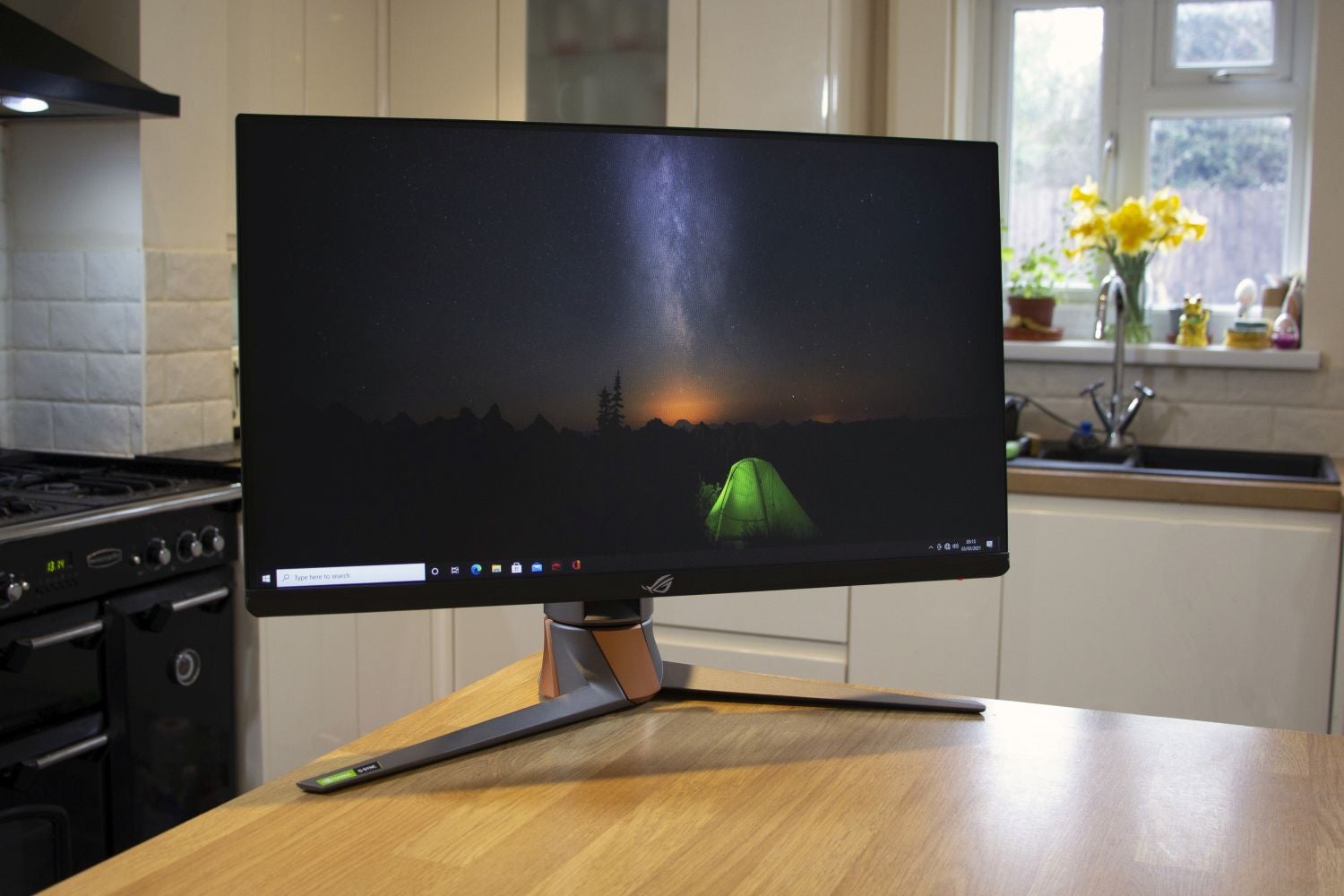 Happily, G-Sync works with both Nvidia and AMD graphics cards, but what’s certain is that you’ll need a powerful graphics card to run games on this display – an RTX 3070 or something faster being the ideal.

The Nvidia Reflex Latency Analyzer measures the latency between the display, PC and mouse – a measurement of the time taken between a mouse-click and the action appearing on the display. These timeframes are tiny – measured in milliseconds – but this tool can show how settings changes or new hardware can make a difference. It’s another feature for pro-level players, who will undoubtedly get the most out of improving those tiny margins.

The high-end features continue with a quoted 1ms response time, although the PG259QNR only achieves this level in its Extreme overdrive mode, where it’s hampered by excess overshoot. The PG259QNR delivers a response time of around 2ms in its conventional mode without any overshoot – and that’s easily good enough for competitive play. 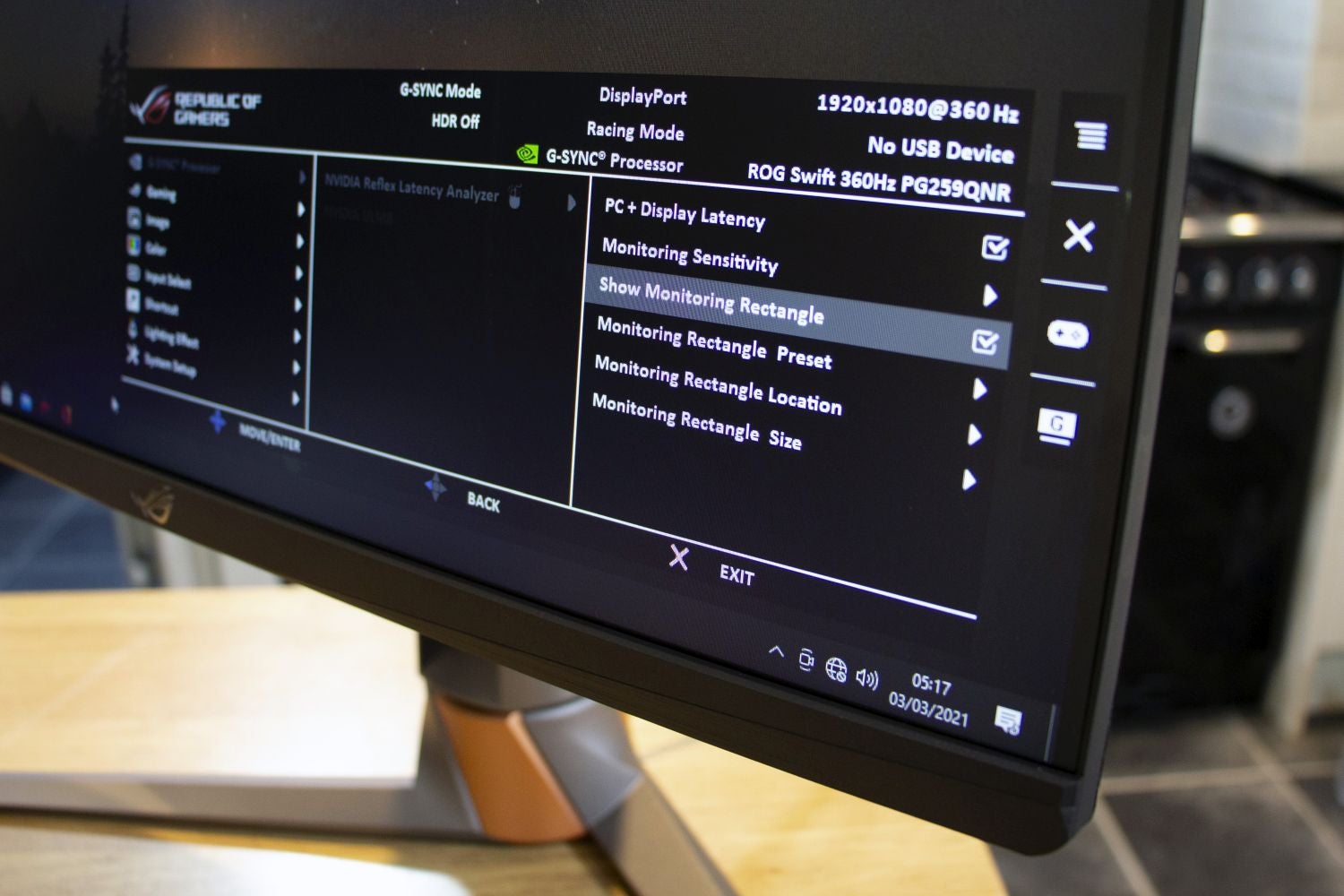 The monitor uses an IPS display with 10-bit colour, and the panel has a matte coating. The 1080p resolution is ideal for esports, and the Asus has a modest 24.5in diagonal. Those figures don’t compare well to more immersive screens geared towards single-player gaming, but the lower resolution enables more graphics cards to run this display properly, and the small physical size means you won’t have to waste time with neck movements to see every corner of the panel.

Elsewhere, there are some aspects of the PG259QNR that require more consideration. For instance, this panel doesn’t have Asus’ Extreme Low Motion Blur (ELMB) technology – it has Nvidia Ultra Low Motion Blur (ULMB) technology instead, which only works at 144Hz or 240Hz without G-Sync. While ULMB at 240Hz delivers marginally sharper images than a synchronised 360Hz output without ULMB, the differences are small and competitive players will prize 360Hz speed and G-Sync over a bit of extra sharpness at 240Hz.

Physically, the PG259QNR is impressive. Build quality is tremendous, with barely any wobbling in the stand and no significant movement in the plastic around the rear. Considering esports panels are moved between events frequently, that’s important. 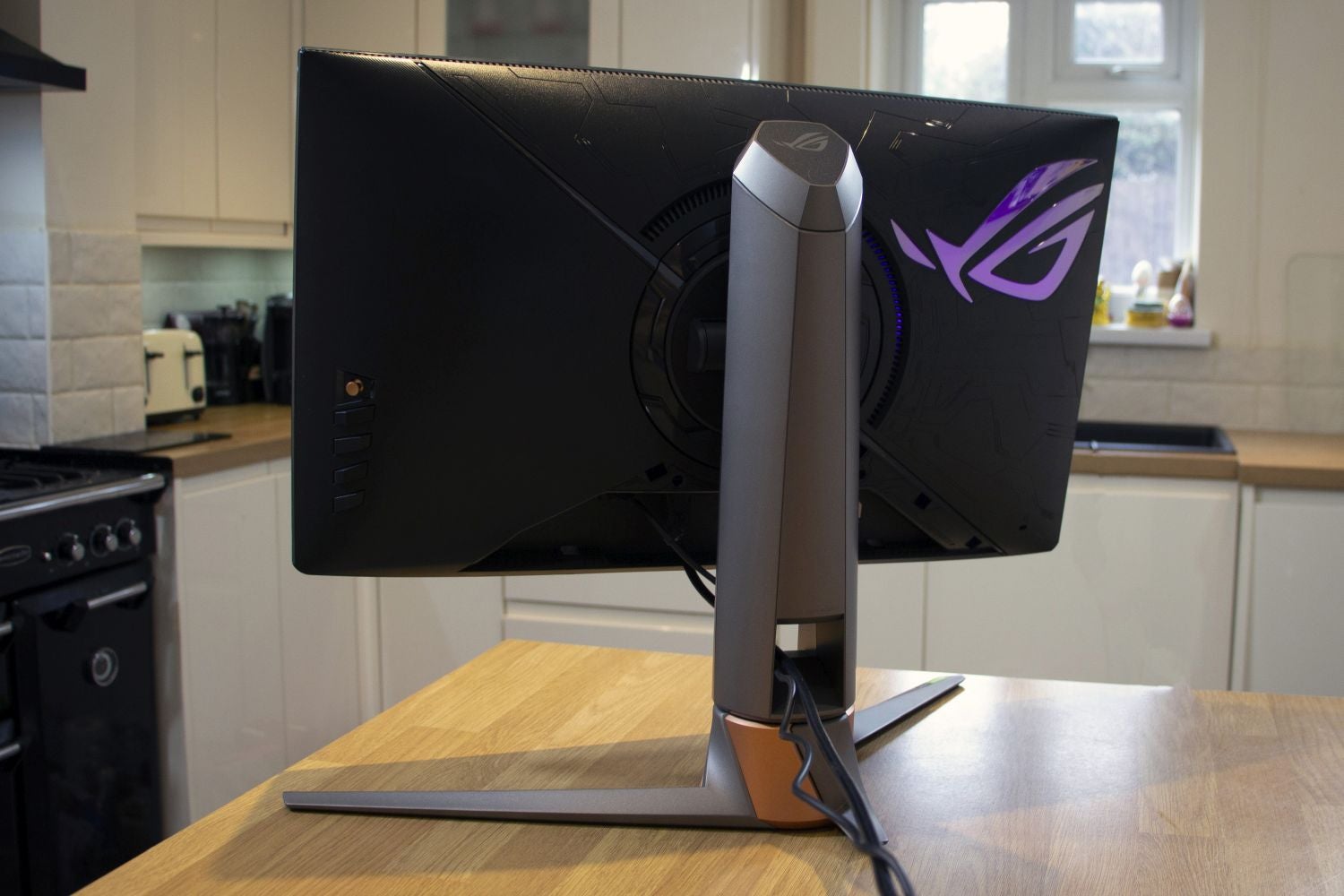 The Asus offers 120mm of height adjustment; it can tilt and swivel, and it works in portrait mode and on 100mm VESA mounts. The tiny bezel makes it ideal for multi-monitor rigs, and Asus includes a desk clamp, too. The PG259QNR comes with two USB ports and a headphone jack, but no USB-C connectivity. The lack of speakers isn’t a big omission when most esports players will be using a headset, but the PG259QNR doesn’t include a headset hook.

There’s plenty of competition at this price, but rival monitors can’t compete with the Asus in terms of refresh rate, so they have to offer more in other areas.

During my testing with a colorimeter, the Asus hit a peak brightness level of 413 nits, and that was paired with a black point of 0.34 nits. Those figures create a measured contrast ratio of 1214:1, which is solid for an IPS panel – high enough to deliver good nuance, detail, and depth without oversaturation.

That brightness level is high enough to handle the bright lights in busy gaming halls, if not HDR content, and the black level is good enough for competitive gaming. That said, plenty of other panels do offer better black levels – and therefore more depth to darker areas. Viewing angles and uniformity levels are consistently great. 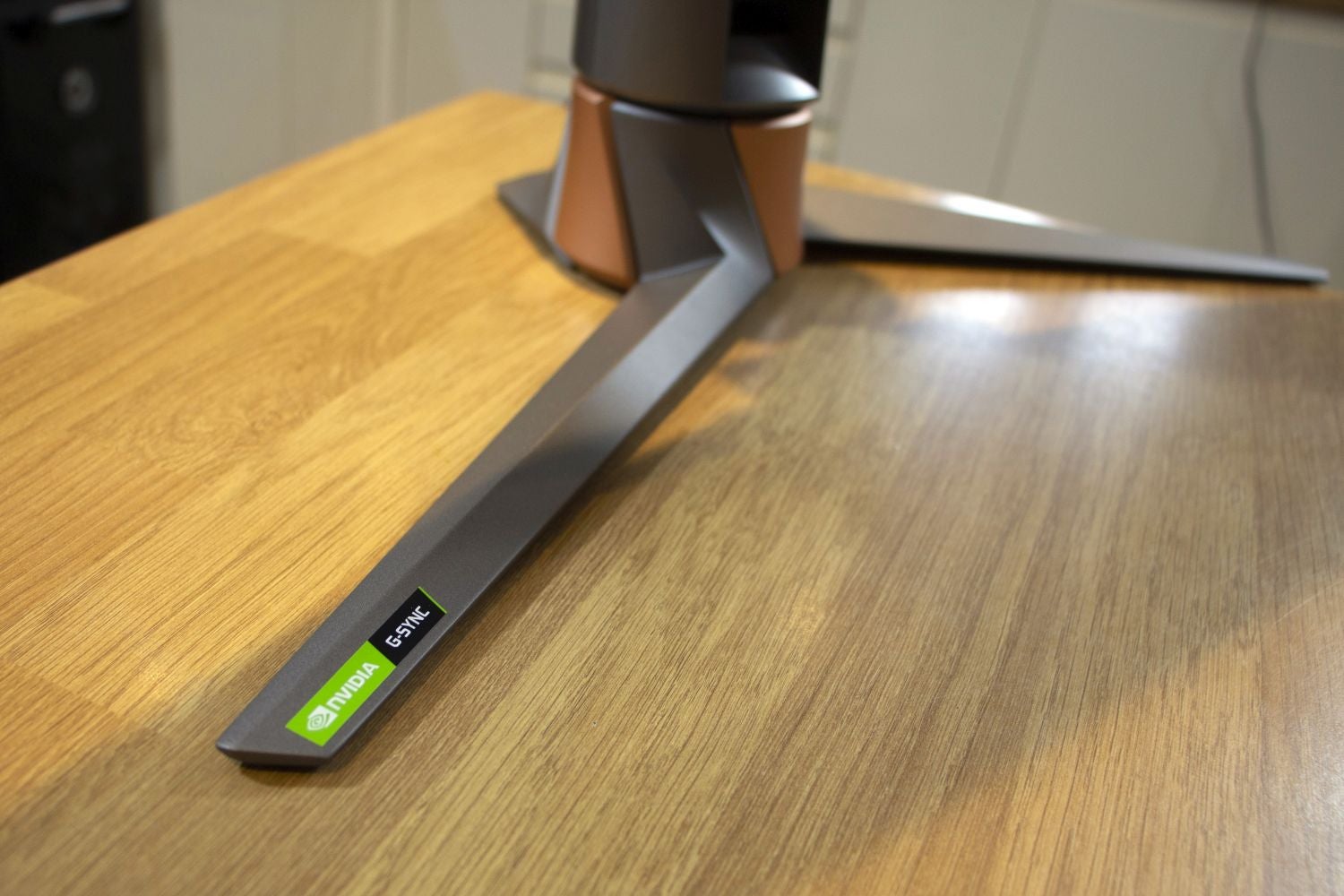 The PG259QNR delivered a colour temperature of 6418K and an average Delta E of 0.64. Both figures are decent, and help the screen render colours with consistency and accuracy. The PG259QNR rendered 99.3% of the sRGB colour gamut, so it will produce every colour required for mainstream and competitive gaming, but only 73% and 72% of the Adobe RGB and DCI-P3/HDR gamuts means it won’t be good enough to take on creative tasks in those colour spaces.

The Asus’ benchmark results compare well to rivals. The Alienware AW2721D offers deeper blacks and better HDR, but its contrast and colour accuracy can’t compare. The Samsung Odyssey G7 has far bolder contrast thanks to VA technology, but its colours were also less accurate.

There’s no doubt about it: the Asus ROG Swift PG259QNR is the fastest gaming monitor on the planet, and the butter-smooth gameplay is paired with an impressive response time, build quality and underlying image quality.

The PG259QNR is small and doesn’t have a high resolution, though, and only the best esports players will see a notable improvement from this display. Also bear in mind that rival displays offer larger resolutions and screens for less cash if you’re willing to compromise on the refresh rate.