A 19in LCD with a 4:3 aspect ratio is currently one of the most popular upgrades for those looking for a new display for their PC. The larger size makes them more attractive than 17in LCDs even if they both have the same actual native resolution. You can pick up a 19in display for less than £150 these days, so it has to be asked why Asus asking around £280 for its latest – the PG191.


The answer is that it’s aimed specifically at the gaming market, with a number of extra features and a high specification in some areas. Before we even get to those we have to deal with the obvious issue here – if this is a monitor aimed at gamers, why does it have a 4:3 aspect ratio? This is a question I asked Asus itself as soon as I was offered it for review and to be frank I didn’t really get a satisfactory answer back. If someone is specifically going for a gaming monitor on the whole they’d expect it to be widescreen – it’s been a long time coming but games are now being written with widescreen resolutions in mind. And a good thing too – you get more on screen, enhancing the gaming experience. 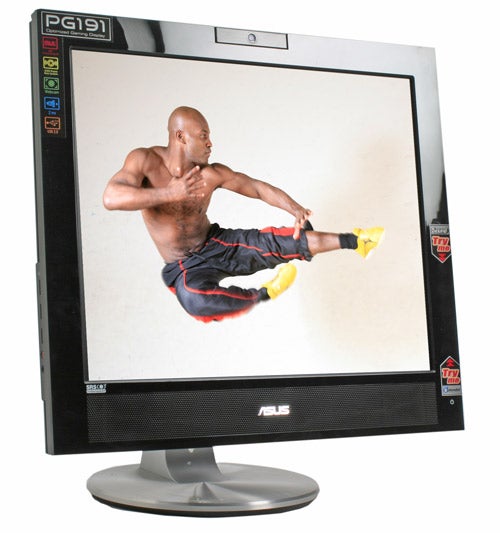 It looks then as if the case for the PG191 has been undermined before the review has even got going. However, Asus has chucked enough in this unit to still make it interesting.


For a start there’s the way it looks. The screen is immediately striking thanks to a shiny black bezel with a touch screen OSD running down the right hand side. Asus has drawn attention to this with some large garish ‘Try Me’ stickers, just as you see on children’s toys on the shelf. Thankfully these stickers can easily be removed. Unfortunately, I found the touch OSD to be more of a gimmick than a useful tool. It beeps every time you press it by default, which is quite annoying and not having any physical buttons actually makes navigating the OSD difficult and frustrating – though I did get used to it eventually. 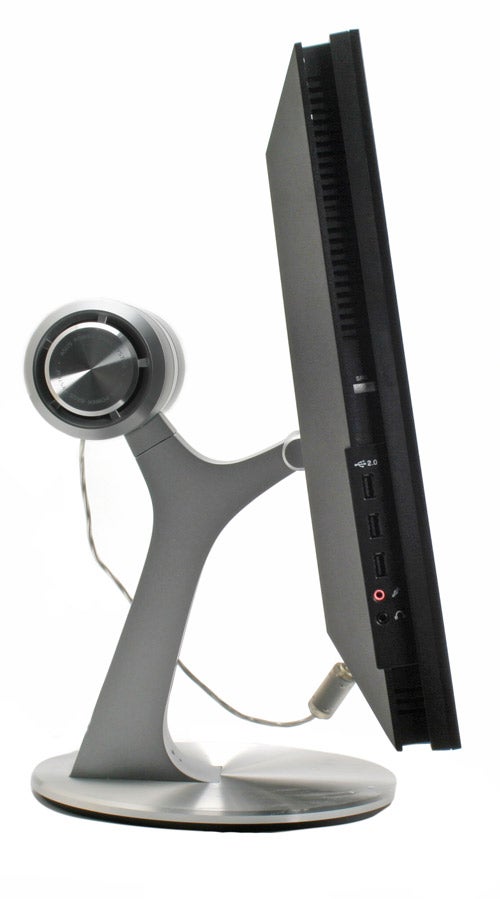 The top of the screen has a rotatable 1.3 megapixel webcam integrated into the top. You might argue that a webcam is hardly a gaming feature, and you’d be right but I do think are a great communication tool and would like to see them integrated into monitors more often. If you do want to use one having it integrated saves cost, hassle and trailing wires but if you don’t need it it does add unnecessary cost. There’s also no built-in microphone so it’s actually only half a job as you’d still need to plug an external one in.


The speakers are placed behind the bottom bezel with the Asus logo in the centre. The sound from the integrated speakers is significantly bolstered by a subwoofer that’s integrated into the silver monitor stand. It’s a large, bulky unit but actually looks fantastic. The circular silver stand is also impressive and very weighty ensuring that the display will stay firmly routed on the desk. The stand offers a gap which can be used for cable management to make things a touch tidier round the rear. There’s no height adjustment but you can angle the screen up and down. 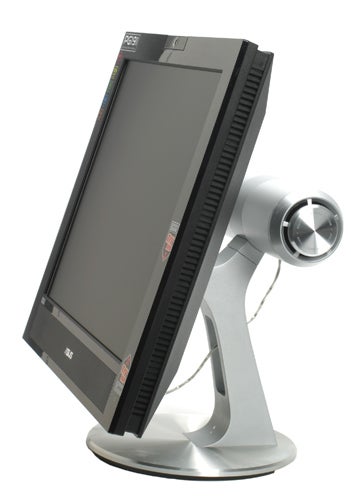 Round the left hand side of the screen you’ll find three USB 2.0 ports, the microphone sockets and a headphone socket, which is very useful as it means you don’t have to root round the back of your PC if you want to plug headphones in. Above the USB ports you’ll also find a button for turning the SRS Surround effect on or off.

At the rear on the underside you’ll find both D-Sub and DVI connections, a line input for the speakers, a plug for the subwoofer and the upstream USB port. There’s even a Kensington lock, which could prove useful if you take the screen to a LAN party and want to keep it secure.


In the box, Asus has supplied a D-Sub cable that also integrates a USB port and a line-in cable, which would make cabling neater but I can’t imagine anyone would want to use it instead of DVI. 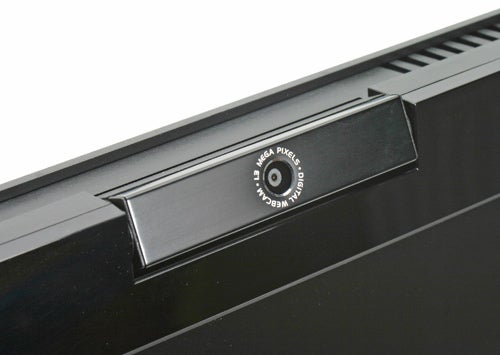 As far as marketing goes, response time is surely getting old as a headline grabbing figure but Asus is persevering, quoting 2ms grey-to-grey. Personally, I’ve never had a problem with LCD response time in games ever since we dropped to below 25ms or so. Perhaps some are more sensitive to it but I’ve never encountered anyone who found the response time to be an issue. The colours and the contrast ratio are more of an issue for me.


In Windows I found that the image was quite bright and clear, with the glossy high contrast coasting enhancing colours. However, it doesn’t have a particularly natural look. Asus has several colour modes for different types of activity but I found that none looked quite right, with either a greenish or a reddish tinge.


The contrast ratio is given as a very high sounding 800:1 so I fired up Doom 3 to see how it coped with a very dark game. In fact, I could only see any detail by using the ‘Night View’ mode which has the effect of boosting gamma, but that meant that the dark part of the screen were washed out. 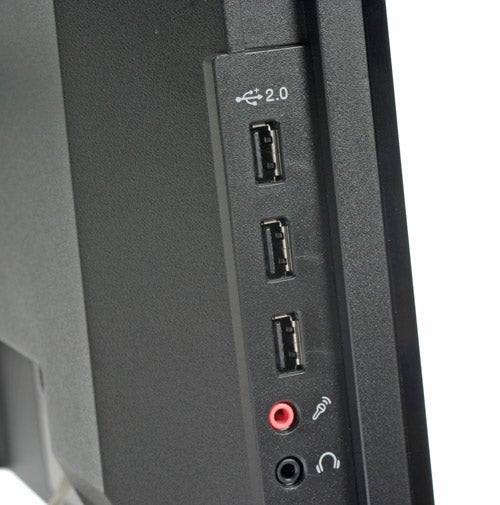 In Counter-Strike: Source I found that the gaming preset mode skewed the colours fairy unpleasantly. Setting the monitor to sRGB and used the natural setting was the best I could get it, but even so it tended to look a little washed out, though thanks to the response time the action was smooth and involving.


DisplayMate also revealed some quite chronic banding that I couldn’t minimise to any significant degree.


The sound quality from the speakers was actually one of the most impressive things about this display. It produced a fair old amount of volume and unplugging the subwoofer revealed just how much that contributed to filling in the sound. The SRS Surround also added a pleasing expansiveness to the sound though at the expense of accuracy.


If you are mainly interested in gaming and don’t have the space for separate dedicated speakers this would do the job, and the easy access to the headphone socket is a boon too. 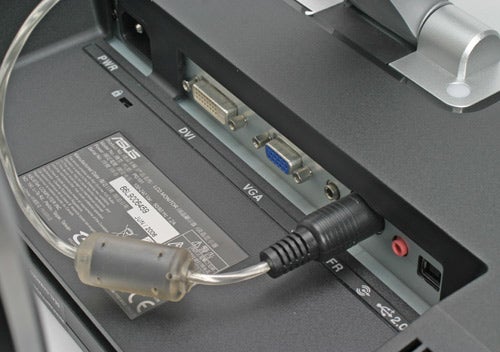 Overall then, the Asus does its job as a gaming monitor and the webcam, USB ports and speakers make it a easy to live with. Ultimately, it’s the lack of widescreen that detracts from this as a real gaming contender. Hopefully Asus can produce a widescreen 20in effort with a 1,680 x 1,050 resolution if not a 1,920 x 1,200 24in version too.


The Asus PG191 does have an eye catching design, the integrated webcam is a good touch and thanks to the subwoofer, the speakers are the best I’ve heard integrated into a monitor. However, I found colours to be over-saturated and unnatural and severe banding was also evident. Furthermore, a real gaming monitor would have a widescreen aspect ratio, and all in all I’m not sure it quite does enough to justify its asking price.