A few months ago I did a round up of Digital TV Tuners that included the Asus U3000. This was quite a cool looking , but was marred by one crucial flaw – it didn’t work very well. As a result Asus UK was keen to get me to look at the My Cinema-U3000 Mini.


Rather than a fold out design of the U3000, the Mini is just a simple USB dongle sized design, complete with a detachable cap that just screams ‘lose me’. As the dongle is so small the TV aerial connection is miniature so an adaptor is supplied so you can hook up to a regular TV point. An external stand alone aerial is also supplied. This is on a long wire so you can place it in the optimum position to get a signal, and the aerial is hinged on its stand so you can angle it. However, the chances of getting a Freeview signal via this aerial where I was testing were virtually zero so I made do with using a roof aerial. 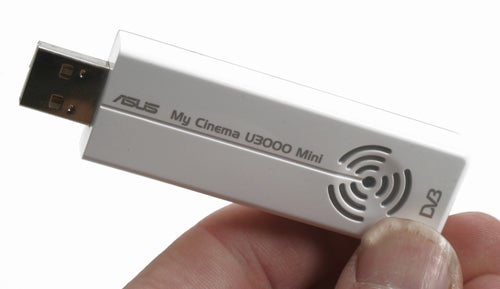 The dongle is white and looks quite smart, and features a grille at one end that lights up green when you get a signal. However, there’s no remote supplied, so you need to be close by to control it.


Once you’ve connected the dongle and installed the drivers you then have to install Asus MyDVD. This essentially just a rebranded version of Cyberlink’s PowerDVD – this is necessary as it installs an MPEG2 decoder so you can view the Freeview video stream. Also supplied is PowerDirector Pro DE, which is a basic video editing application, and also Media@Show SE, which is designed to create slideshows and presentations. Amazingly, your Windows desktop resolution needs to be set to 800 x 600 or 1,024 x 768 for this to even launch. I can’t see many people making much use of this software. 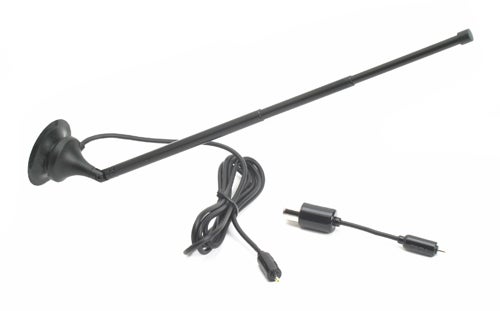 Unlike with the U3000 the U3000 Mini software has all the required serial numbers supplied so you can actually use the product – a real step up from the U3000 – well done Asus. However, the serial numbers are all printed on the CDs themselves, which means that you have to insert the disc, start the installation, remove the disc to enter the serial number and then reinsert the disc to carry on with the installation – which will then auto launch a second installation, which you then have to cancel. It would have been easier if the numbers were printed on the CD sleeves, but then you’d run the risk of losing the sleeves and installing the software in the future.


The Mini is compatible with Windows Media Center so if you’ve got that but don’t have a TV Tuner then this would be a easy way to add one. However, if you don’t have MCE then you’ll have to rely on the software supplied. The software you’ll be using then is Asus EzVCR – a truly inspirational title that makes great use of the English language.

After you’ve launched the software you need to scan the airwaves to pick up channels. By default it’s set to Taiwan, so you have to change it to your country. Scanning for channels took just under five minutes to complete, which wasn’t too bad.

The first thing I was struck by was the impressive image quality. Freeview is plagued by compression and artefacts, but some tuners are better than others at dealing out quality images and this was one of the better ones. Colours are vibrant and the image looked smooth even when made full screen. This is done by selecting the maximise icon, rather than double clicking as you might be used to from Windows Media Player. You also have to press Escape to go back to the windowed image. 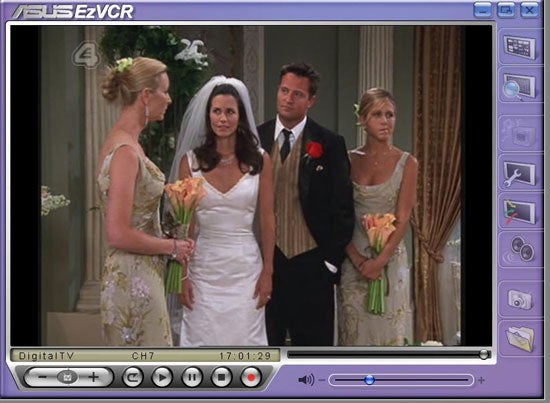 One thing I noticed was that it took a noticeable amount of time to change channels, which could get tiresome. What’s annoying is that often after changing channels the sound would be out of sync with the picture. I found that I could correct this by jumping back to a few moments ago, which you can do if time-shifting is enabled, and then going forwards to the live broadcast. It was annoying having to do this though.

Another issue is that there’s no indication of what the name of the channel you’ve tuned to is. Not is there any way of finding out the name of the programme you’re watching. With even the most basic Freeview box giving you this information, this is a little disappointing. There is an EPG but it was nothing like the sort of guide you get from a Sky or Cable TV box or even from Windows Media Center. If the programme you’re interested in is listed then you can double click on it to get it to record. It’s not a very elegant solution though.

One problem I found though was that the files I recorded would not play back on my test system. I would get audio, but no picture. This is likely to be a codec problem but I didn’t have time to investigate this fully for the review. I will post an update if I do solve it but as it stands it rather knocks on the head using this for scheduled recordings. A useful feature is the ability to do a channel scan – freeze frames from each channel are laid out in a grid and you click on one to go to that channel. You can also take a snapshot of the screen, adjust the brightness, contrast and the hue of the image. 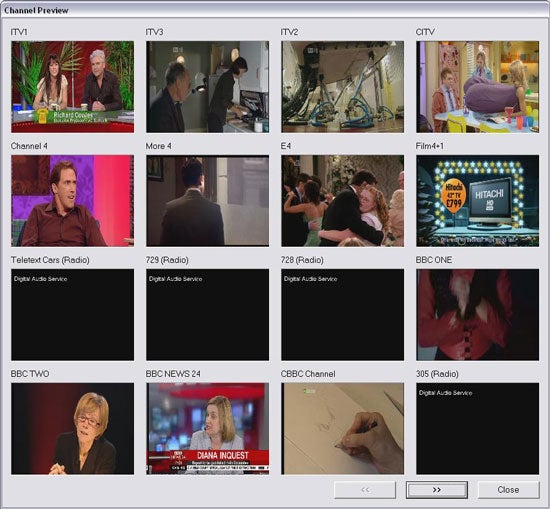 All in all, the Asus U3000 Mini works better than the non-mini version, but there are issues with the software. On the plus side, as long as you’ve got a strong signal the picture is good, which is virtually the most important thing. For casual viewing this will do the job then, but due to software issues and slow channel changes I’d be reluctant to rely on this for a main tuner for a media centre system.


A small, portable way of getting television onto your laptop, this is a decent piece of hardware. However, the supplied software is a bit rough around the edges so I would only use it for casual viewing, not as a tuner for my main media system.